As part of its ongoing Discovery Program, NASA has selected four possible missions to some of the most hostile and enigmatic places in the solar system.

Established in 1992, NASA’s Discovery Program “gives scientists a chance to dig deep into their imaginations and find new ways to unlock the mysteries of our solar system,” according to its website. Projects previously chosen under the Discovery Program include the Kepler space telescope, the Lunar Reconnaissance Orbiter, and the InSight lander, which is currently on Mars. Upcoming missions include explorations Jupiter’s trojan asteroids, the 210-kilometre-wide (130 miles) 16 Psyche asteroid, and the Martian moon Phobos.

So this program has a strong track record – and as the newly announced batch of possible missions indicates, that trend is set to continue.

The Discovery Program stipulates that proposed missions can’t step on the toes of ongoing or pre-approved projects. Accordingly, these four new concepts, all of which have yet to receive final approval, involve missions to previously neglected yet highly valuable scientific targets. These include Venus, Jupiter’s moon Io, and Neptune’s moon Triton.

The planners of these four shortlisted missions will now embark upon nine-month studies to further flesh out their concepts, after which they'll need to submit a formal Concept Study Report to the Discovery Program. Luckily, they’ve all been given $3 million in additional funding to make it happen.

Let’s take a look at the four candidates. 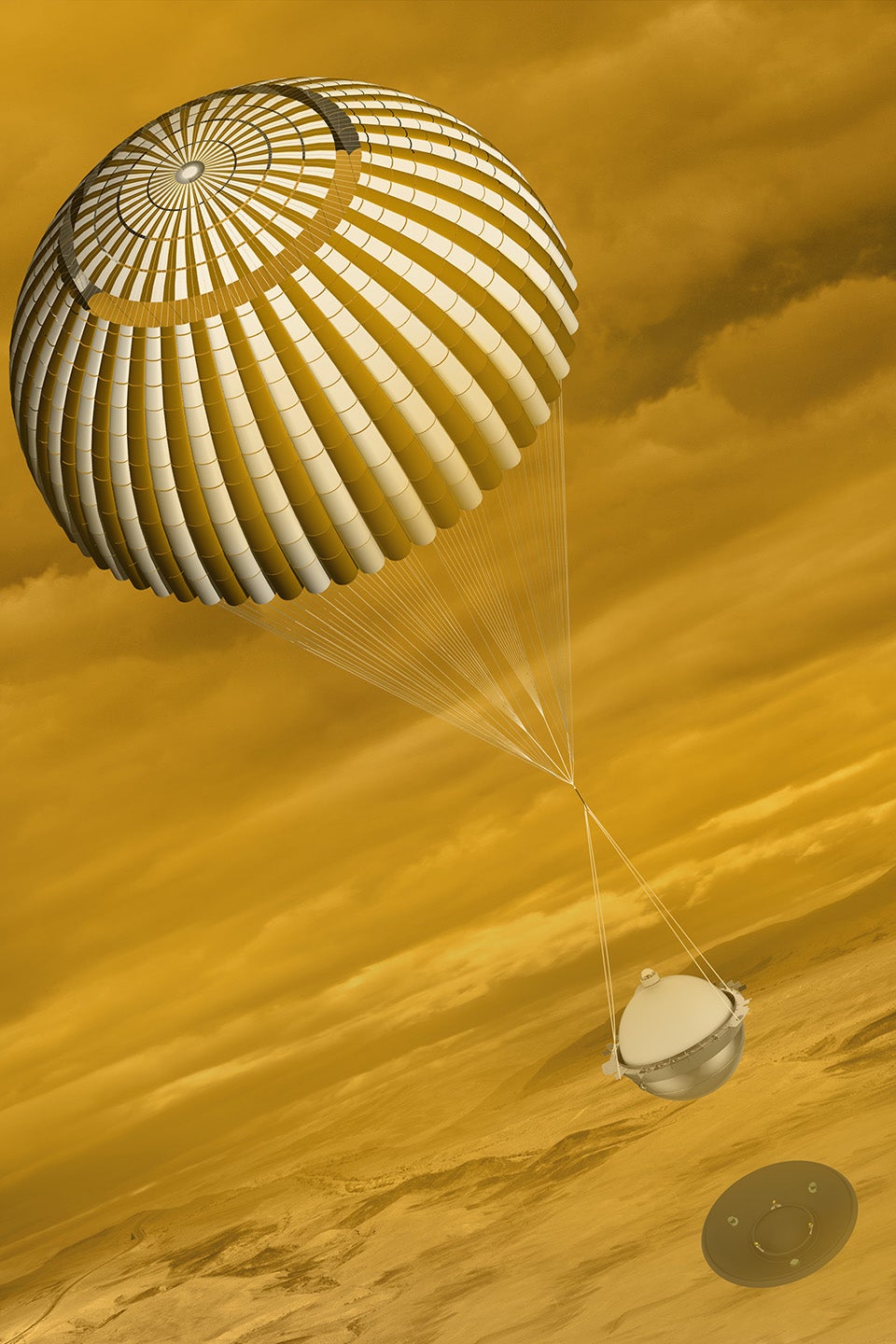 Conceptual image of DAVINCI+ during its descent toward the surface of Venus. (Image: NASA/GSFC)

First, there’s DAVINCI+, which stands for Deep Atmosphere Venus Investigation of Noble Gases, Chemistry, and Imaging Plus. The Goddard Space Flight Center is the group behind this project, the primary purpose of which is to analyse Venus’s noxious, roiling atmosphere. Many lingering questions remain about this pressure cooker of a planet, such as how it formed and evolved and whether its surface once hosted liquid water.

During this brief mission, the spherical DAVINCI+ probe will use a parachute to slowly descend toward the surface, during which time it will take various measurements. In particular, the probe will try to sniff out traces of noble gases, such as xenon, which could reveal insights into Venus’s volcanic and hydrological past. The probe will also map the surface and detect different types of rock.

The instruments on DAVINCI+ will be protected from the planet’s tremendous heat and pressure, including a camera (which accounts for the + sign in the project name, a recent addition) to snap pics during the hour-long descent. As to how long the probe will last once it’s on the surface, that’s anyone’s guess.

The Io Volcano Observer (IVO) would explore Jupiter’s moon Io. This object is supervolcanic, the result of tremendous gravitational forces imposed by its enormous, gaseous host. Io has the most dynamic surface of any object in the solar system, making it an excellent target for scientific exploration. Institutions involved in this bid include the University of Arizona in Tucson and the Johns Hopkins University Applied Physics Laboratory in Laurel, Maryland.

IVO would perform around 10 close flybys of Io during the five-year mission, which could be extended by three more years depending on how things go. The probe would reveal new insights into tidal heating and how heat builds up in the core before spreading to the surface. These findings would help scientists better understand similar processes seen elsewhere, such as on Saturn’s moon Enceladus, which features a warm subsurface ocean. 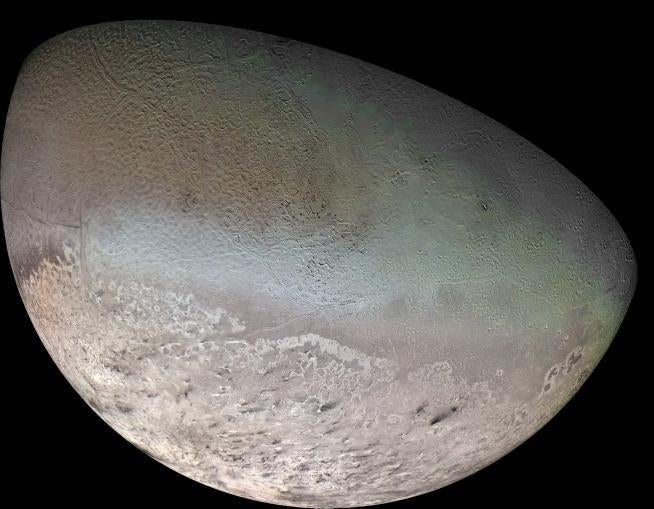 Neptune’s moon Triton, as photographed by Voyager 2 in 1989. (Image: NASA/JPL/USGS)

The Trident mission would see a spacecraft zoom past Triton, a poorly understood moon around Neptune. This proposed mission from the Lunar and Planetary Institute in Houston, with help from NASA’s Jet Propulsion Laboratory in Pasadena, California, would explore the potential for habitability at the extreme edges of the solar system.

Observations from NASA’s Voyager 2 probe revealed an icy yet highly active surface on Triton. In fact, this moon features the youngest surface of any terrestrial body in the solar system, second only to Io. Triton might actually have its own atmosphere, which would make it only the second moon in our solar system known to host an atmosphere, the other being Saturn’s Titan. The moon might also be erupting material into space via cryovolcanoes (yes, literal ice volcanoes), and its ionosphere is thought to churn out complex organics that precipitate like snow. Excitingly, Triton could also feature a subsurface ocean.

The Trident mission would involve a single flyby, so it would be a one-and-done deal, similar to New Horizons' mission to Pluto. Though brief, Trident would pass exceptionally close to the moon (within 500 kilometres), during which time it would map the surface, measure its ionosphere, and hunt for traces of a hidden ocean. As an added bonus, Trident would swing by Jupiter on its way to the Neptune system. 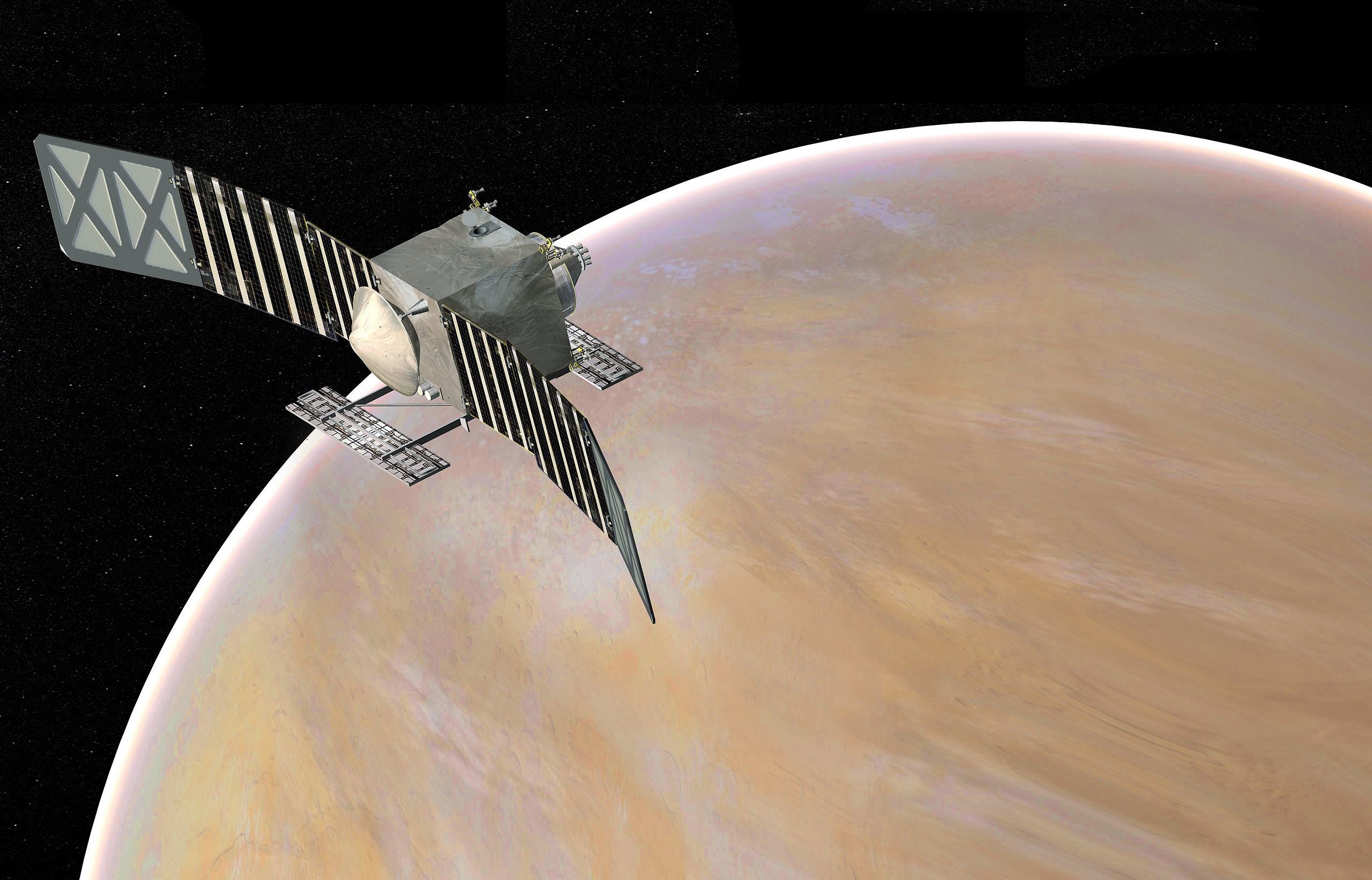 Conceptual image of VERITAS in orbit around Venus. (Image: NASA/JPL-Caltech)

Finally there’s the VERITAS mission, which stands for Venus Emissivity, Radio Science, InSAR, Topography, and Spectroscopy. This low-cost, two-year mission would see a satellite stationed in orbit around Venus, where it would perform a detailed analysis of the planet’s surface. The primary purpose of this mission, led by NASA’s JPL, is to understand the differences and similarities compared to Earth. Essentially, why did Venus deteriorate into our evil twin?

Equipped with an array of sensors, VERITAS would create a 3D topographical map of Venus, hunt for signs of craters, tectonic activity, volcanism, and previous water, take the planet’s temperature, study its gravitational field, and perform a detailed geological survey.

The VERITAS mission could be seen as competing with the DAVINCI+ project. Its planners have designed the mission such that the satellite could deploy a nanosat probe into the atmosphere, where, with its mass spectrometer, it would hunt for noble gases.

It seems unlikely, therefore, that NASA would choose both the VERITAS and DAVINCI+ missions, but we’ll have to wait and see. Sadly, only one or two of these missions will be officially greenlit, a decision we can expect in 2021.