Here's the Best Way to Make Fried Rice, According to Hungry Engineers

Scientists explored the physics of tossing fried rice in order to devise the “optimal regime” for producing the dish, according to a new paper.

Fried rice dates back 1,500 years, when Sui dynasty chefs began quickly moving their hot woks to toss rice and impart the browned-but-not-burned flavour. But surprisingly, scientists haven’t quantitatively studied or attempted to optimise this process – until Georgia Tech PhD student Hungtang Ko and professor David Hu came along. They hope their research, published recently in the Journal of the Royal Society Interface, could one day inspire “stir-fry robotics and exoskeletons” (their words) in order to lessen the rate of muscle injury among wok-using chefs.

Woks’ weight and shape allow them to attain extremely high temperatures. Under these conditions, food quickly browns as amino acids from the proteins react with sugars breaking down, imparting a desirable flavour. But if cooked for too long at these temperatures, the sugars caramelise and ultimately burn. Chefs using woks must quickly toss the rice to prevent the burning – but studies have demonstrated a high prevalence of shoulder pain among cooks in Taiwan, which the study authors blame at least partly on woks.

The researchers filmed five stir-fry chefs in Taiwan and China (the restaurants were Ruyi in Chulu, Taiwan, Pinxin in Nanwang, Taiwan, and Xiao Chuan Er, Ma La Xiang Guo, and Da Rong He in Henan Province, China), then analysed the footage and produced a mathematical model of wok motion. Chefs rarely lift their heavy woks off the stove, and so the researchers were able to approximate woks as a pair of pendulums, where a point directly above the wok’s bottom serves as the fulcrum of the first pendulum, and the contact point between the wok and the stove is the fulcrum of the second pendulum. Basically, the model wok moves in a back-and-forth motion as well as a see-saw motion. 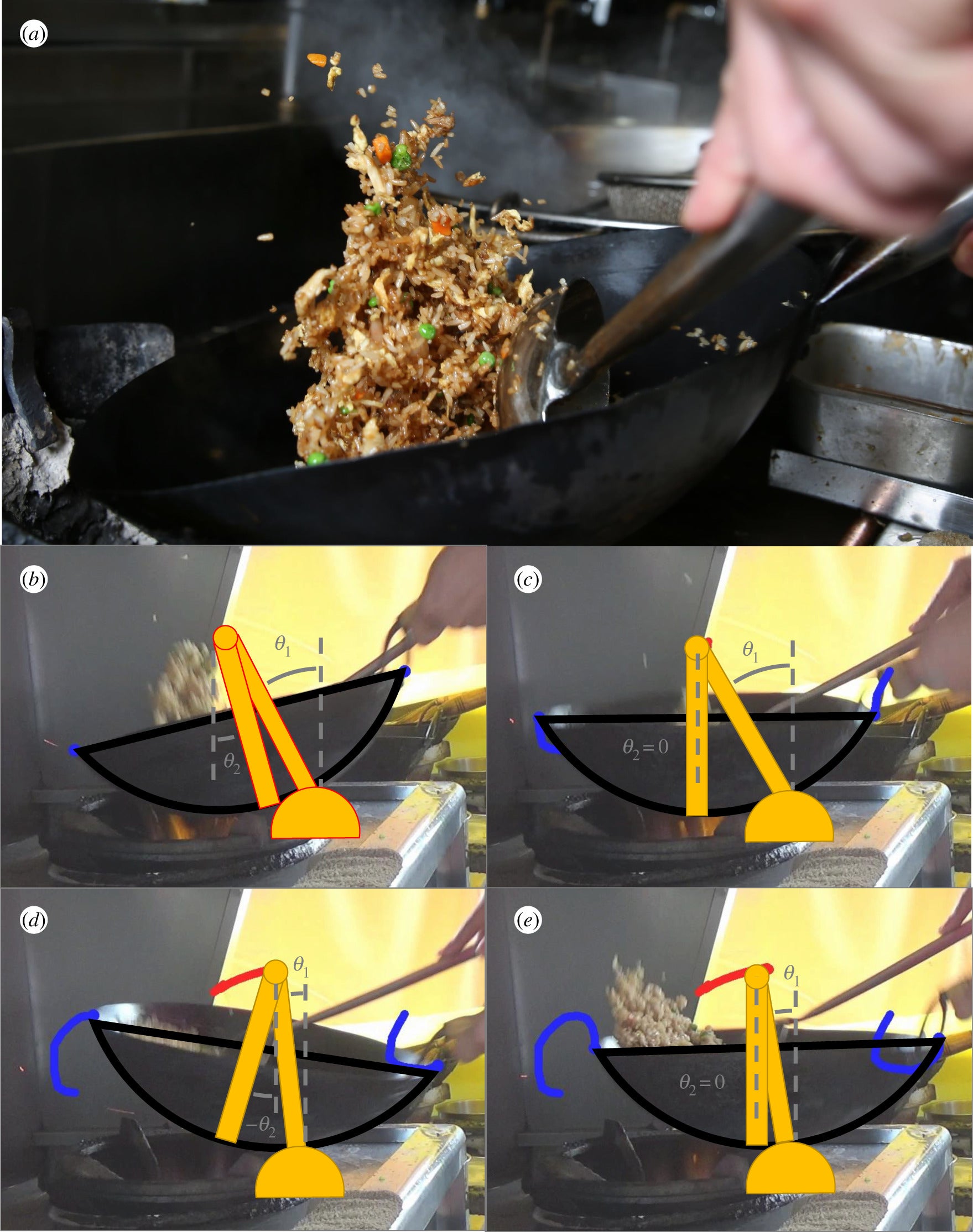 Imagining a wok as a double-pendulum. This is likely a perfect candidate for Science Diagrams That Look Like Shitposts. (Graphic: Hungtang Ko and David L. Hu/Journal of The Royal Society Interface (2020))

With their model in place, the researchers could simulate the trajectories of rice grains as projectiles moving along the surface of this pendulum. They then used this simulation to calculate the motion of the wok needed to ensure that most rice lands in the optimal place without falling out. They analysed both the frequency of the tossing as well as the phase difference between the two idealised pendulums.

The videos demonstrated that despite differing restaurant conditions, chefs tended to toss the rice 2.7 times per second, with the speed slightly increasing with more tossing cycles. Based on the simulation, the approximate optimal tossing speed was three times per second, with a 1-radian (approximately 57-degree) phase difference between the pendulums. Basically, the back-and-forth and see-saw motions have to work together to maximise the distance the rice travels in the pan without sending the rice over the edge.

Of course, there are plenty of other factors that the researchers could not include in their simulation. They only modelled the motion in two dimensions, and the study only focuses on wok motion, as opposed to aid from other kitchen tools such as spatulas. Serious Eats has devised a dozen rules for producing the perfect fried rice, covering how dry the rice must be and how much sauce to add, all crucial elements in the fried rice production process.