Researchers have identified a potential issue with sensors used in some older Tesla models that misinterpreted speed signs to read the speed limit as 50 miles per hour greater than the sign stated when a piece of electrical tape slightly obscured one of the numbers.

The issue was identified as part of 18 months of research by McAfee researchers Shivangee Trivedi and Mark Bereza, who sought to examine the ways that machine learning could potentially be exploited, specifically in the case of autonomous vehicles. Many autonomous vehicle suppliers use cameras produced by MobilEye to register the limits on speed signs, and McAfee researchers found that using stickers to slightly alter the appearance of the sign had the potential to interfere with the camera’s reading.

Testing with two 2016 Teslas, a Model S and a Model X, the researchers were able to fool the cameras into believing that a 35 MPH sign read 85 MPH – first by adding several stickers that partially obscured the “3" in 35, and then reducing them to identify the point at which they failed to correctly read the sign. They found that adding even a 2-inch horizontal piece of black electrical tape to the middle bar of the “3” in 35 led to a misclassification of 85 MPH.

“Even to a trained eye, this hardly looks suspicious or malicious, and many who saw it didn’t realise the sign had been altered at all,” the researchers wrote. “This tiny piece of sticker was all it took to make the MobilEye camera’s top prediction for the sign to be 85 mph.”

They ultimately determined that with Tesla’s Speed Assist and Tesla Automatic Cruise Control features enabled, the modifications to the signs could result in the car accelerating and exceeding the speed limit on its own. It’s worth noting that Tesla stopped using MobilEye technology in its vehicles after 2016, and as the researchers noted, the newest Tesla models “do not currently appear to support traffic sign recognition at all.” The researchers also noted that they conducted “very limited” tests on a 2020 vehicle with the newest MobilEye camera and found it wasn’t susceptible to the same attack. 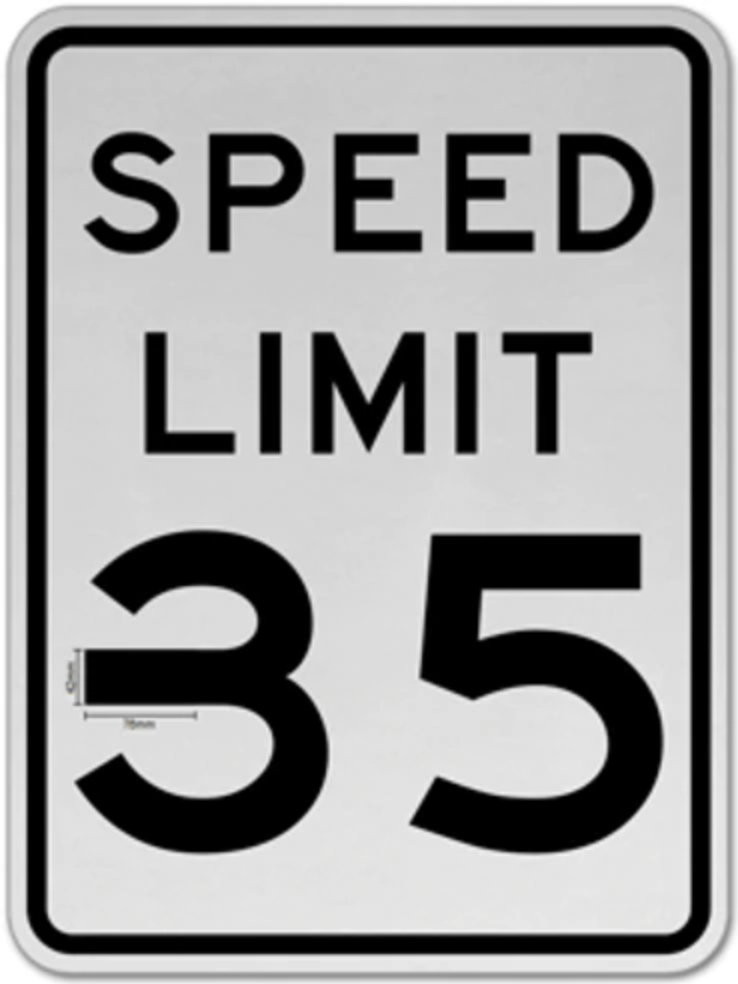 The 35 MPH speed sign with a 2-inch piece of electrical type applied to the “3" that resulted in a misclassification by a Tesla Model S. (Image: McAfee Advanced Threat Research)

Reached for comment, a MobilEye spokesperson told Gizmodo by email that stickers on the traffic signs “can confuse a human eye and therefore we do not consider this an adversarial attack.” While this may be true for the stickers that obscured the number, that’s not necessarily true for the electrical tape, which the researchers noted did not necessarily indicate to a human that the sign had been altered. However, the spokesperson added that the system was not meant to support fully autonomous driving.

“Traffic sign fonts are determined by regulators, and so advanced driver assistance systems (ADAS) are primarily focused on other more challenging use cases, and this system in particular was designed to support human drivers – not autonomous driving,” the spokesperson said. “Autonomous vehicle technology will not rely on sensing alone, but will also be supported by various other technologies and data, such as crowdsourced mapping, to ensure the reliability of the information received from the camera sensor and offer more robust redundancies and safety.”

Tesla did not immediately return a request for comment. The McAfee researchers did disclose that they contacted both MobilEye and Tesla prior to publishing their report, and both “indicated interest and were grateful for the research but have not expressed any current plans to address the issue on the existing platform.”

The researchers commended MobilEye for apparent changes to its cameras and for looking to research to inform their product performance. They did note, however, that the camera that misclassified the speed limit is still present in a significant percentage of deployed Teslas. And while drivers are expected to still be alert behind the wheel of any semi-autonomous vehicle, history has shown that is not always the case.