By Abdullah Gohar on at

Late one night last September, I received a phone call from a stranger. The man, the owner of a stone-cutting workshop near Cairo, told me he had seen something strange – some kind of fossil – while slicing into a large block of limestone that was to be used in building a kitchen. As a professional palaeontologist with a popular Facebook page, I’m always happy to get tips from the public on potential fossil discoveries. But when this man sent me photos of the limestone blocks, I immediately realised he had something invaluable.

I specialise in studying extinct whales, and from my first glances at the images, I knew this would be an important data point in the evolutionary history of cetaceans. I am the lab manager of Mansoura University Vertebrate Palaeontology Centre (MUVP), the first and only centre of its kind in North Africa and the Middle East. I study marine mammals, especially whale fossils that show how living cetaceans are the result of more than 50 million years of evolution, which transformed a group of small, hoofed, deer-like terrestrial mammals into the fully aquatic leviathans of today. 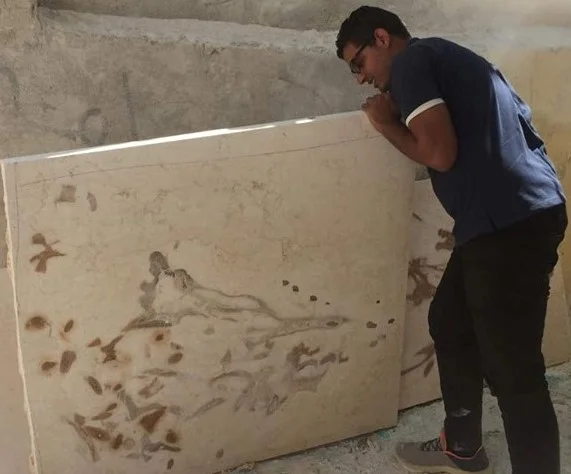 The author examining the fossils for the first time. (Photo: Hesham Sallam)

I rushed to show the photos to my supervisor, Hesham Sallam (director of the MUVP centre and assistant professor of palaeontology in Mansoura University), who was equally dazzled by what he saw. We arranged to go see the limestone blocks in person the very next morning. I couldn’t sleep that night, I was so eager to see these fossils.

At sunrise, we made the three-hour drive to the workshop of Mohamed Barakat. When I looked at the specimen, I was shocked by how gorgeous and well-preserved it was. It appeared that the bones belonged to an Archaeoceti, a group of the predecessors of modern whales and dolphins, but to really study this whale, we’d need to get it back to our lab.

Large fossils compromise the strength of cut stone, so decorative stone containing fossils is often considered defective and discarded. However, Barakat already had an offer from a buyer who wanted the slabs for his kitchen. Sallam and I began explaining how valuable this fossil would be to our work. Fortunately, Barakat’s response was: “I donate these slabs to you for more scientific research, for free.” We thanked him profusely. 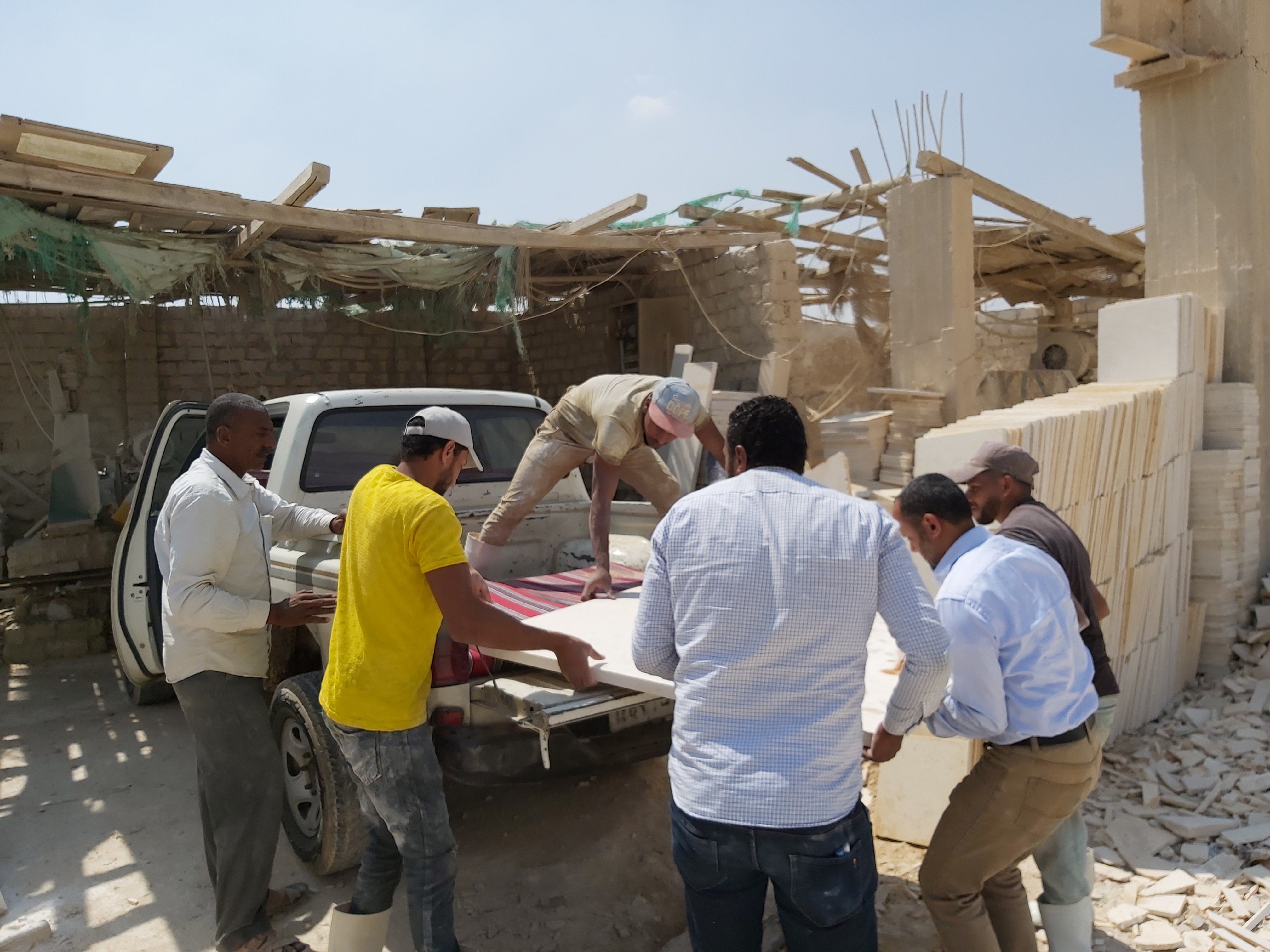 Transporting the blocks from the workshop to our lab. It was a difficult and exhausting process. (Photo: Abdullah Gohar)

With the help of seven people, a wheeled cart, and, mercifully, a lift, we moved the five quarter-ton panels to our lab, where the rest of the team was waiting for us. Right away, I began working on this enigmatic fossil. I wanted to know: Is it similar to previously known Egyptian whales? Or it is a new species altogether? Egypt is very important in the history of whale evolution. Wadi El‐Hitan (“Valley of Whales”) is an area within the Fayum Province of Egypt that for many decades has been famous for producing abundant remains of Eocene whales, such as Basilosaurus. Up to now, fossils from Egypt have revealed 11 different species of extinct whales.

The only information available from Barakat about the source of the limestone was that it came from Shaikh Fadl in Upper Egypt. Tracking the sale of the block and consultation with local professors indicated it came from 40-million-year-old limestone at a quarry in Wadi Tarfa. (This same quarry was also the source of a block of limestone that, in 2011, was found to contain a previously unknown species of ancient whale, Aegyptocetus tarfa. This fossil was only discovered after the block was imported to Italy and cut into plates of decorative facing stone.)

Limestone is a sedimentary rock composed mostly of calcium carbonate fossils, and it forms when marine creatures, sand, and mud are deposited at the bottom of oceans and over time solidify. Whale carcasses float after death due to a buildup of gases during initial decomposition, but eventually they sink to the ocean floor. When this ancient whale died during the process of limestone forming, it ended up as a fossil.

The lower jaw of the whale, including the teeth roots. (Photo: Abdullah Gohar)

We soon determined that the bones belonged to Protocetidae, a group of Eocene whales that represent a unique step in cetacean evolution and are the predecessors of modern whales and dolphins. Its remains include a complete skull, mandible, most of its backbone, limbs, and ribs. These amphibious species still had powerful legs that could support them on land as well as power them through water. Our specimen appears to have been a big whale, larger than most other amphibious whales – it was perhaps 5 metres (16 feet) long and approximately 900 kilograms (1,900 pounds), but I cannot say for certain.

We’re calling the specimen the “Barakat whale,” honouring its original finder, or the “Kitchen whale.” This creature is unique among other ancient amphibious whales, and we believe it represents a new genus and species. In the near future, we hope to analyse the “Kitchen whale” in greater detail. By looking at its anatomical features alongside the results of phylogenetic analysis, we can figure out the position of this creature in the evolutionary tree of whales. We are also working to devise a way to create a 3D model of the new materials, including delicate internal structures, for further scientific studies.