I love Samsung’s Galaxy Z Flip, almost in spite of myself.

As a foldable phone sceptic who doesn’t really understand why you would want a giant smartphone to turn into a medium-sized tablet, Samsung’s Galaxy Fold experiment failed to impress me (and that was before its display turned out to be a hot mess). I also hate the Flip’s rollout – why Samsung is only giving reviewers 24 hours with the phone is beyond me. (Don’t worry, Sam bought one and as soon as it arrives so will our official review.)

But last Friday night, I tucked the Flip into the tiny, tiny pocket of my leather jacket, which fits almost nothing but a tube of lipstick and a compact, and headed off to a Dashboard Confessional concert. It was then that I realised I love this phone – or at least the design change that the Flip represents. Both flip phones and emo-pop are back in style and I couldn’t be more thrilled. (Teenage me probably thought we would have all moved past both this phone design and this music genre by now, but we have not!) 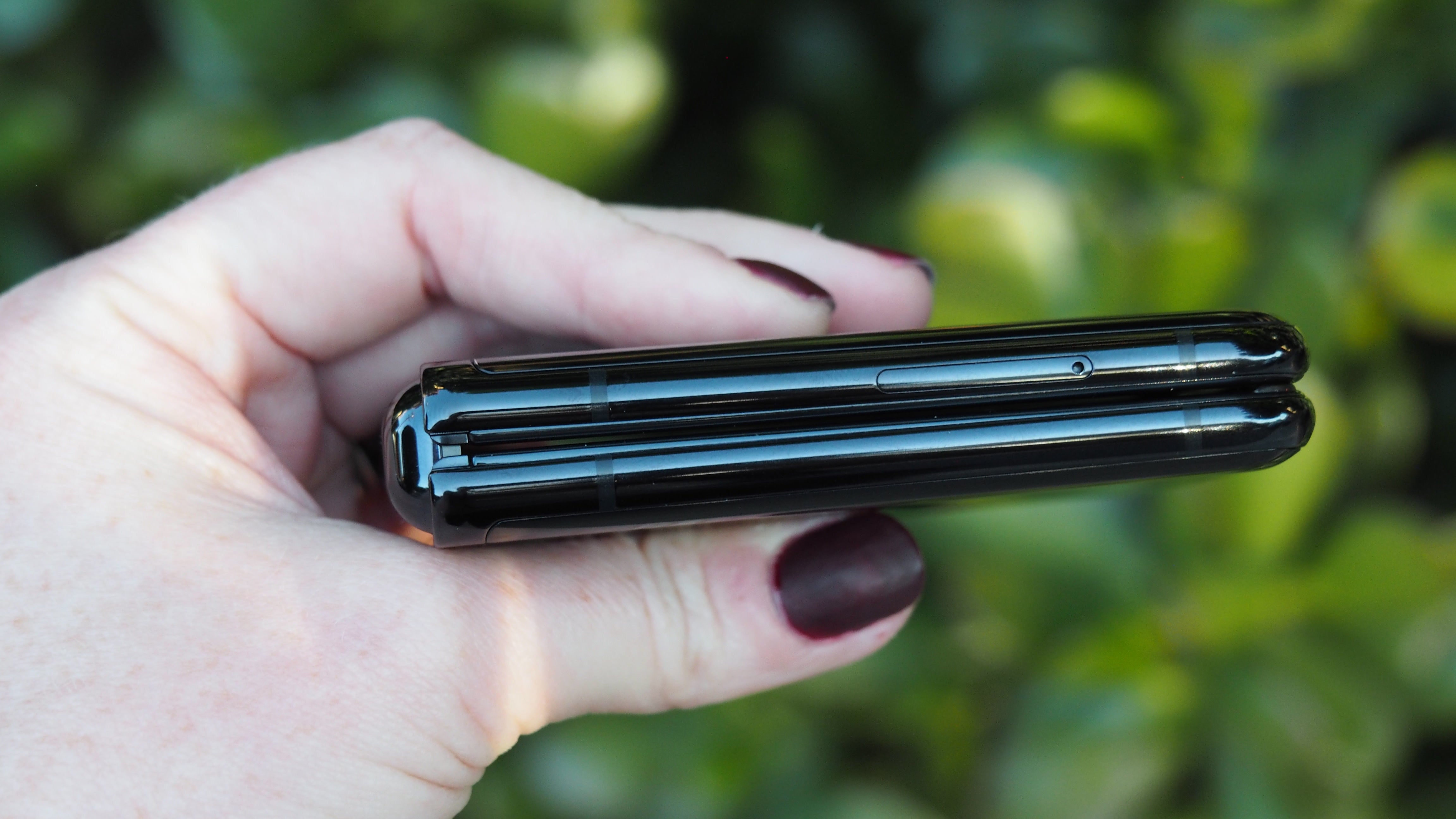 Like the Galaxy Fold, the Flip has a gap between the hinge and display – but this phone feels sturdier. (Photo: Caitlin McGarry/Gizmodo)

There’s plenty of curiosity around the Flip, and the number one question people asked me during my time with the phone was: How does it feel? Understandably, folks are a little concerned about the new phone’s durability after last year’s Galaxy Fold debacle. The good news is that the Flip seems far more suitable to the grind of daily life than the Fold does. Samsung is for the first time using bendable glass (or so they say – I’ve asked for more detail on the screen’s materials and have yet to receive any specifics). A slightly raised bezel around the Flip’s 6.7-inch screen acts as a buffer to keep the glass from banging against itself when you close it. 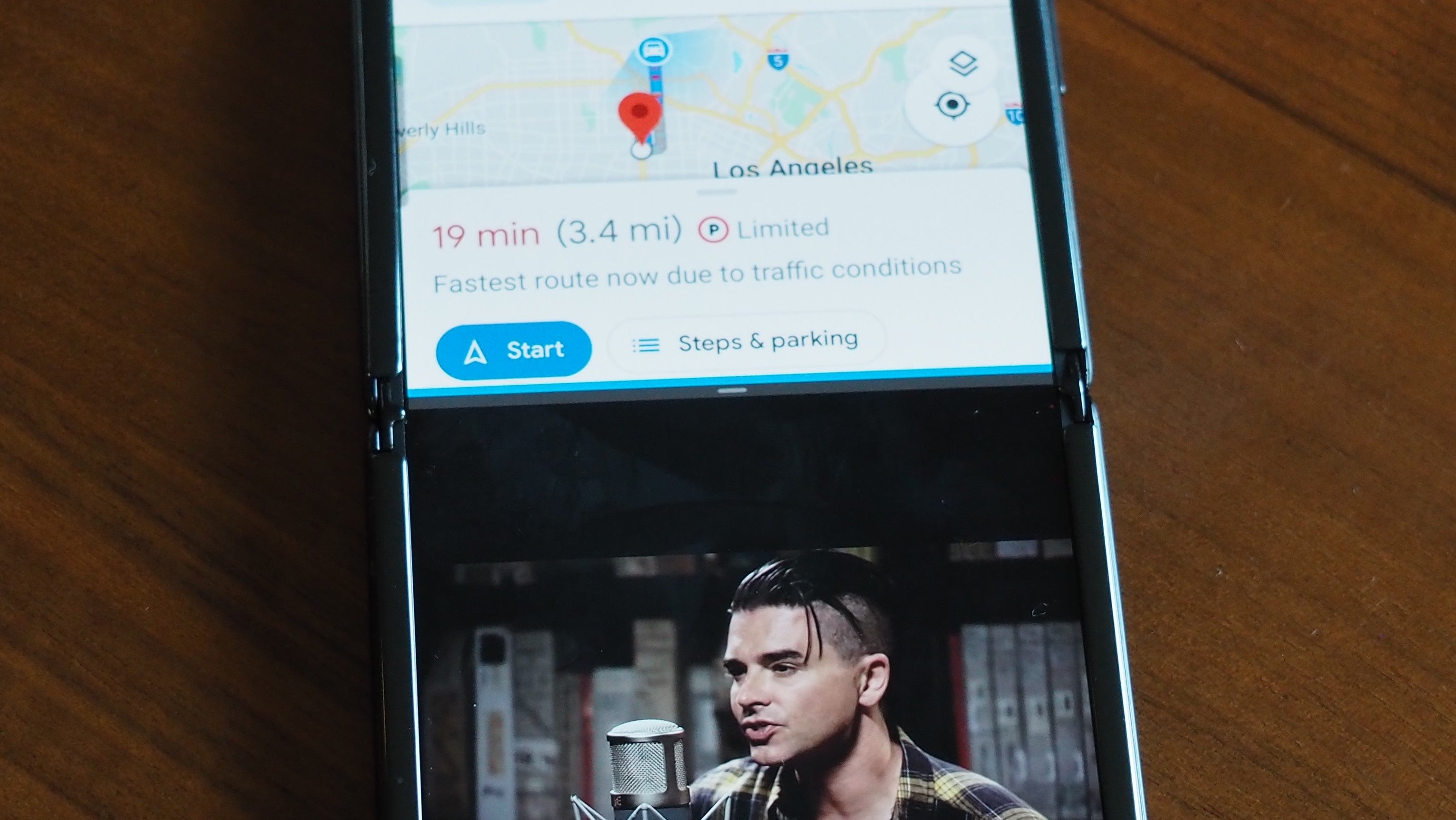 A slightly raised bezel prevents the Flip’s glass from bumping against itself. (Photo: Caitlin McGarry/Gizmodo)

A video showing the Flip’s glass screen failing a series of durability tests indicates that whatever the display is made of isn’t as scratch-resistant as real glass. That may be true, but the screen felt more like glass than plastic to me, especially compared to the Fold and Motorola Razr. Those with Cardi B-like talons could probably puncture their Flips if they really wanted to, but in my experience, the screen held up to normal use.

The one problem I have with the Flip is that it feels almost too resistant to outside pressure. That’s a good thing in terms of durability – I didn’t see any places where debris could work its way into the hinge or under the screen – but a bad thing when it comes to my ability to open the damn phone with one hand. However, it’s just as satisfying to hang up on someone by slamming the Flip closed as it was when I was a petulant teenager with a flip phone in the 2000s (and still listening to Dashboard Confessional).

I also don’t love the 1.1-inch exterior screen, which acts as a preview screen for selfies (not useful) and displays notifications (also not that useful because the text is scrolling and incomplete). The screen should be larger and show more information to mitigate the need to open the phone every time I want to see if I missed anything. 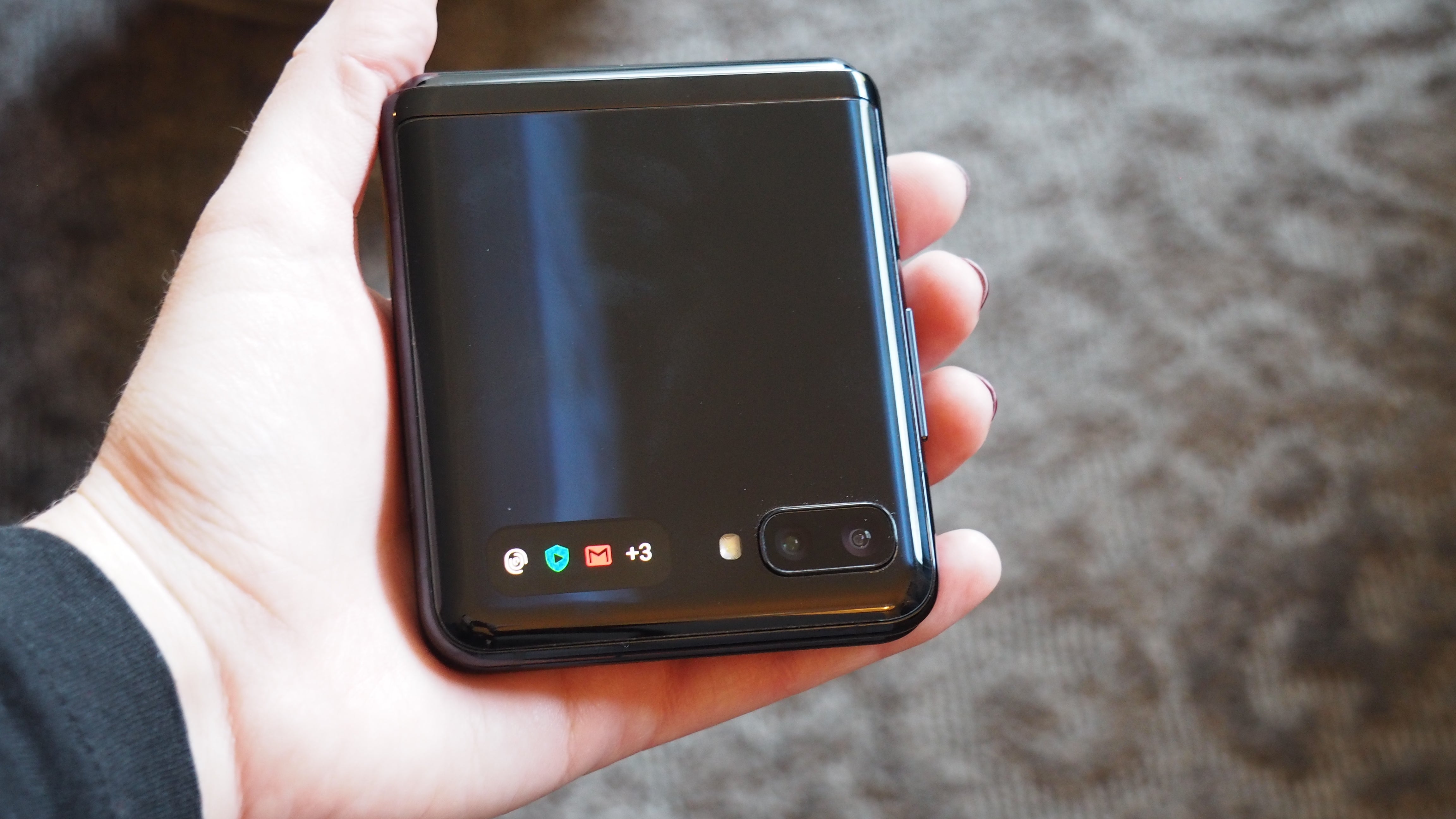 The Flip feels like a Samsung flagship in basically every way – you’re not sacrificing specs for a unique design (unlike the Motorola Razr, which costs more for underwhelming performance). Samsung baked a Qualcomm Snapdragon 855+ processor with 8GB of RAM into the Flip, giving it solid performance for multi-tasking with side-by-side apps and playing endless rounds of Asphalt 9. The Flip doesn’t have the most cutting-edge CPU or 5G connectivity, like Samsung’s new Galaxy S20 Ultra, but it’s plenty capable.

I wasn’t able to run battery tests on the Flip, but in my anecdotal experience, its 3,300 mAh split battery offers slightly above-average life. I ran the phone down from 50 per cent to 15 per cent over seven hours of pretty heavy use, which included gaming, streaming music on Spotify, watching Schitt’s Creek on Netflix, taking photos, and endlessly scrolling through Instagram. You’d probably be able to squeeze out a day and a half of battery life on a charge.

The Flip’s cameras – two 12-MP lenses on the back and a 10-MP selfie lens – are fine. I took some shitty low-light photos of Chris Carrabba crooning on-stage at The Wiltern in Los Angeles, and the Flip made them look decent. Portraits of flowers and photos of pizza were serviceable, though Google’s Pixel 4 still outshines Samsung’s cameras thanks to incredible photo software.

Using the Flip’s Flex Mode, which makes it easier to multi-task with the bottom half of the screen when the phone is bent at a 90-degree angle, is fun for selfies because you can set up the phone as a sort-of tripod and use hand gestures as timers instead of pressing a button. For those of us with short T. Rex arms, this is a breakthrough. 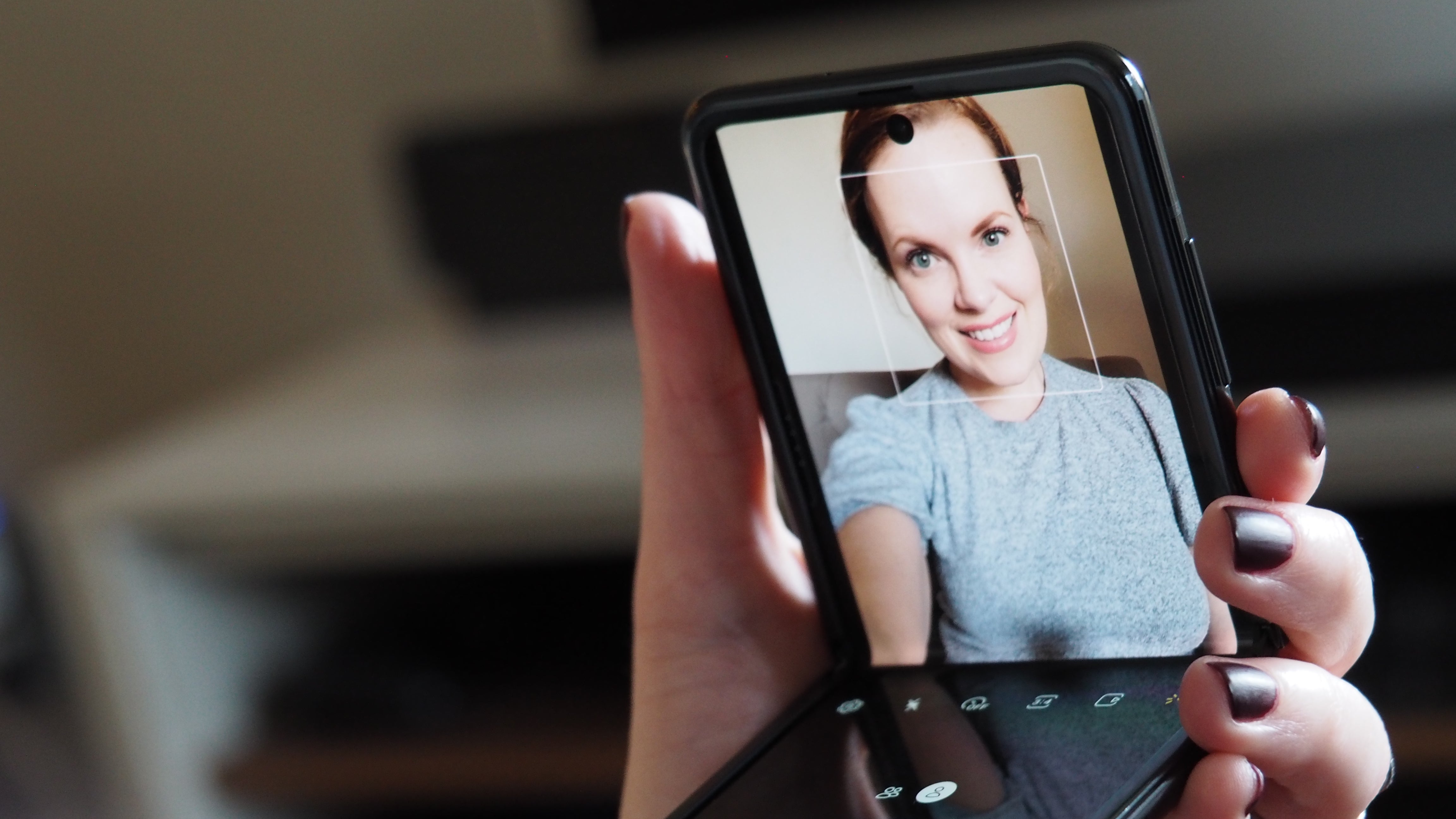 The Flip’s Flex Mode makes it easier for me to take selfies with my incredibly short arms. (Photo: Caitlin McGarry/Gizmodo)

So what did I learn after just 24 hours with the Galaxy Z Flip? Well, it’s a perfect size, feels fun to use, and I didn’t break it, which probably says more about me than this phone, but still.

Samsung is clearly expecting the Galaxy Z Flip to be a smash success, if the cordoned off area in front of its Los Angeles-area Samsung Experience Store went the Flip went on sale last Friday was any indication. No one was in line when I arrived to pick up the phone at 10 am, though the cupcake shop a few doors down was a dozen people deep for Valentine’s Day. Foldables are likely too expensive and too much of an unknown quantity for anyone but early adopters to fully embrace them.

Gizmodo’s Sam Rutherford is reviewing the Galaxy Z Flip as we speak to see if foldable phones are here to stay (at least until augmented reality glasses replace them). Stay tuned to find out whether the Flip is worth £1,300. Right now, I’m leaning yes.