The great ideological battles over internet piracy feel like they’re long behind us, but the developers of the action RPG video game Kingdom Come: Deliverance have come up with a tactic to combat their pirate foes that has us reminiscing about the old days. Rather than throwing a fit, the developers are monetising a pirate group’s IP to create a new income stream.

Warhorse Studios released Kingdom Come: Deliverance in 2018, and it’s gone on to great success with sales hitting somewhere around 2 million copies. As TorrentFreak reports, the game was also pirated on torrent sites almost immediately after its release. That’s just the way things go in the PC game industry – you live with it and hope legitimate sales make everything worth it.

But Warhorse Studios has come up with a clever way to capitalise on the torrented copies of its games by setting up an online shop selling metal poster reproductions of the NFO file contained in the torrent of its game. Typically, torrents for video games contain an informational file that might give installation instructions; but above all, it acts as a calling card for the pirate behind the rip. It’s kind of like an artist signing their work. In this case, the pirate group Codex spread copies of Kingdom Come: Deliverance online, and the Warhorse folks blew up the signature image for display in anyone’s home. The posters, printed on metal, are available in various sizes and range in price from £37 to £123.

A variety of colours are available for the Codex poster, but black is the only authentic option. (Screenshot: Displate)

It’s a unique approach that could give Kingdom Come fans a way to support the creators and make up for a little lost revenue. But what I like most about it is the opportunity to appreciate the ASCII art that pirates serve up with their pilfered goods. I’ve always admired the aesthetic of these files and the low-res keygens that come along with torrent files. There’s really no practical reason for this stuff to always look like it was made in 1994, but that’s just the tradition, and it invariably carries on.

I’ve never touched the game, and the studio’s boss seems like a total dick, but I could see this kind of approach working for others as a nice little option for fans to lend support. And I’m sure that Codex is perfectly happy getting its cred spread around IRL. If you really want to get into the spirit of things, you could always just print your own. 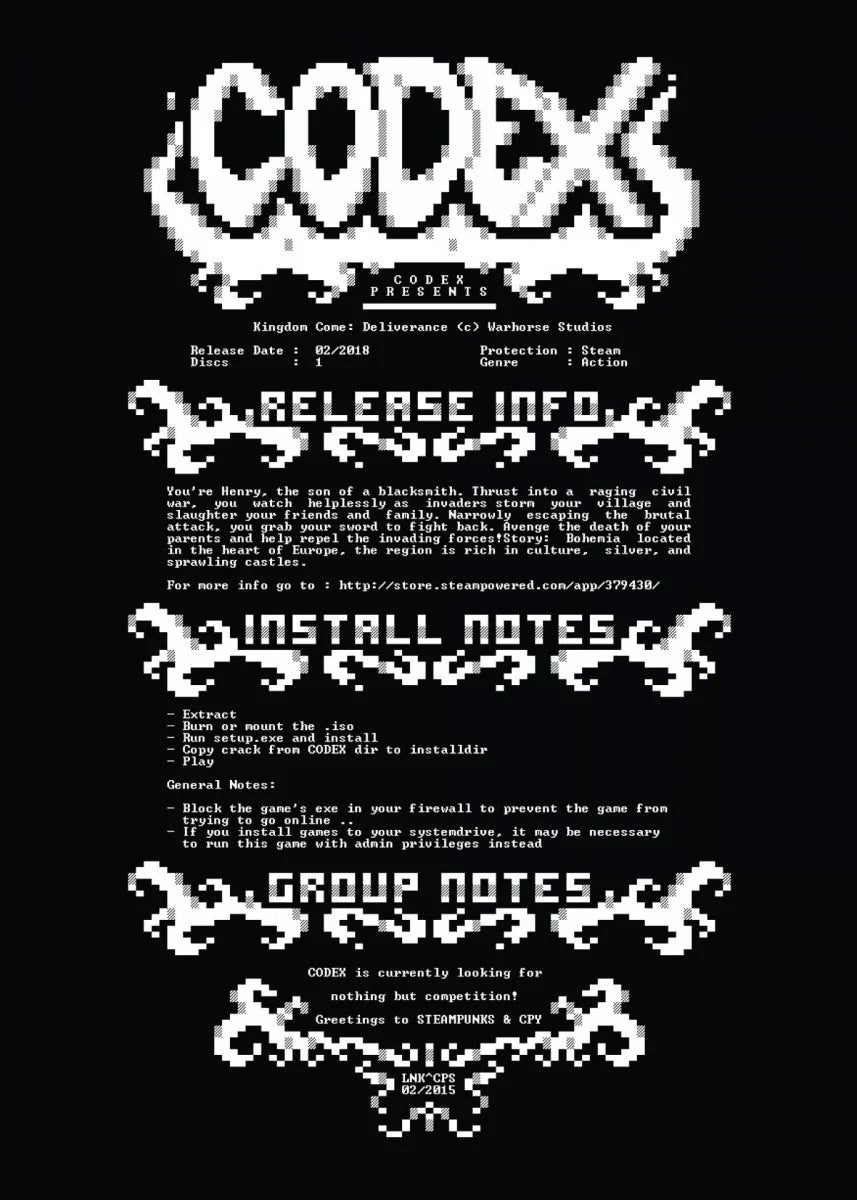 The poster in full. (Screenshot: Displate)