Marvel's Baddies Are Getting Their Own Villainous Game

The villains are entering the multiverse. We can reveal that Villainous, the card-based board game starring Disney’s evildoers, is heading into some other familiar territory with Marvel Villainous.

This latest addition to the now-expanding franchise features some of Marvel’s standout baddies, as well as new gameplay rules that set it apart from its main Disney counterpart. Ravensburger has given us the first look at Marvel Villainous: Infinite Power and three of its five villains, each of whom feature a different artist: Hela (Ilse Harting), Thanos (Johnny Morrow), and Ultron (Eduardo Francisco).

Created in a partnership with Prospero Hall, Marvel Villainous is set in the world of the comics, not the movies (although some of the character designs look like they take inspiration from the Marvel Cinematic Universe). In a statement, Ravensburger executive vice president Florian Baldenhofer said that going from Disney to Marvel felt like a logical next step for the Villainous series.

Below is the first look at the Marvel Villainous box art, featuring Thanos, as well as some of the character and ability cards:

Marvel Villainous is the second franchise in the Villainous series, which debuted in 2018 with Disney Villainous: The Worst Takes It All. The hugely entertaining House of Mouse-style crossover game pitted classic Disney villains like Jafar, the Queen of Hearts, and Maleficent against each other in a race to be the first to complete their evil task. Disney Villainous has since grown with three expansions, including next month’s Perfectly Wretched. They can be played by themselves or combined with any of the other sets.

Even though Disney and Marvel are under one corporate-conglomerated roof, that relationship doesn’t expand to this series. Marvel Villainous is a standalone game that is not designed to be played with Disney Villainous (although I’m sure some folks will find a way to make it work). The main reason for this is the rules system, which has been altered for this game. In Disney Villainous, each villain has their own “Fate Deck,” where players can screw each other over by playing heroes to their boards. But in Marvel’s version, one massive Fate Deck is shared between all players. That’s because, unlike Disney, Marvel is a shared universe where characters often crossover between comics and films, so Ravensburger wanted the game to reflect that. 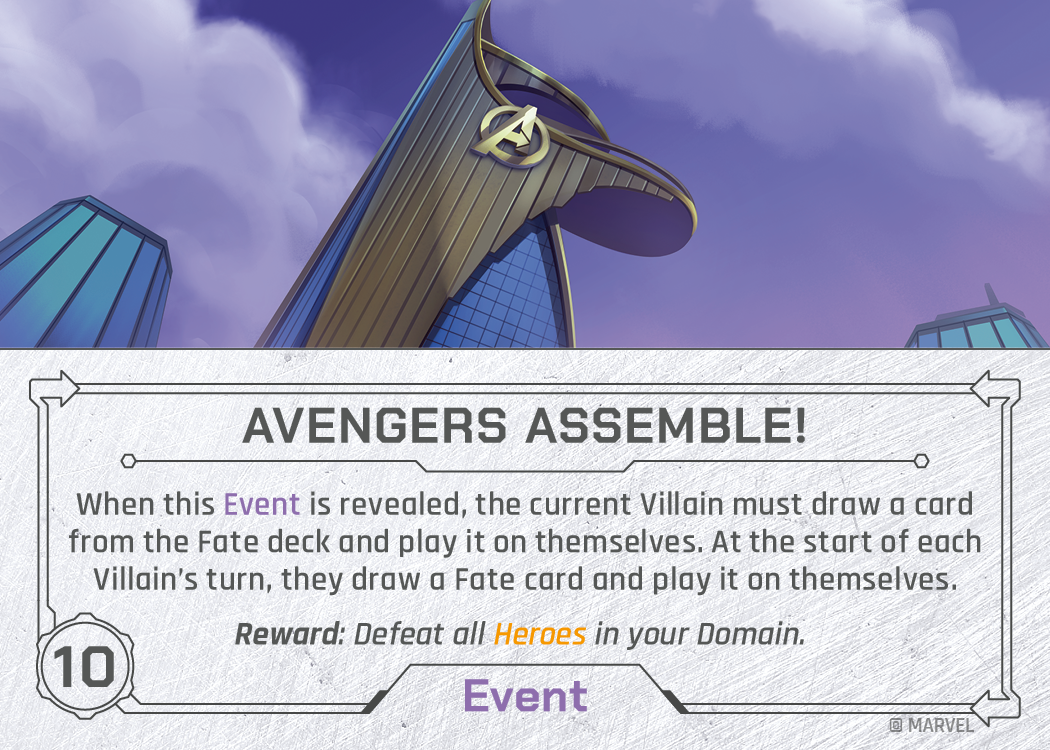 One of the shared Global Event cards, which were designed by Jessé Suursoo. (Image: Ravensburger)

This is also reflected in Marvel Villainous’ new Event cards, included in the shared Fate Deck. They’re major obstacles that inflict ongoing penalties so long as they’re in play. There are smaller events that affect one player at a time, as well as bigger ones that screw over everybody in the game. Those are the equivalent of all the Avengers lining up in a giant line of justice, so all the villains have to work together to stop them. It might be hard to imagine Hela working with Thanos on, well, anything – but when the future of your evil empire is on the line, the enemy of your enemy might be your best bet.

Marvel Villainous: Infinite Power is set to come out in August and will be available for preorder sometime in July. Ravensburger said the remaining two villains, along with the signature game pieces that make Villainous games look so stylish, will be revealed this summer.