At this point, we’re all crossing our fingers that the dying star Betelgeuse will hurry up and explode already, because who doesn’t love a good show? The red giant star (visible in the constellation Orion) has been growing dimmer since late last year, leading many to speculate it could soon go supernova. Scientists operating the European Southern Observatory’s Very Large Telescope have released new images of the supergiant star – and yep, it looks weird.

Not only is Betelgeuse dimming, it seems to be changing shape.

Betelgeuse, the reddish dot in the top-left corner of Orion, is a star around 700 light-years away, with around 20 times the Sun’s mass and a radius 900 times larger. The 10-million-year-old star – that’s young by star standards – already seems to have aged into a red supergiant. Though the star varies in brightness, lately is has grown progressively dimmer and is now around 36 per cent of its usual brightness, according to an ESO press release. All red supergiant stars will end their lives in a supernova, which is when a star collapses in on itself after it has burned through all of its lighter elements and builds up a core of iron.

One team led by Miguel Montargès, astronomer at KU Leuven in Belgium, has observed the star since last December using the ESO’s Very Large Telescope, which captures the visible light that celestial objects release. Today, the ESO has released one of the images taken with the Spectro-Polarimetric High-contrast Exoplanet REsearch (SPHERE) instrument. The images reveal a star dimming and changing its shape. Here’s the star compared to what it looked like a year ago, taken by the same telescope and instrument: 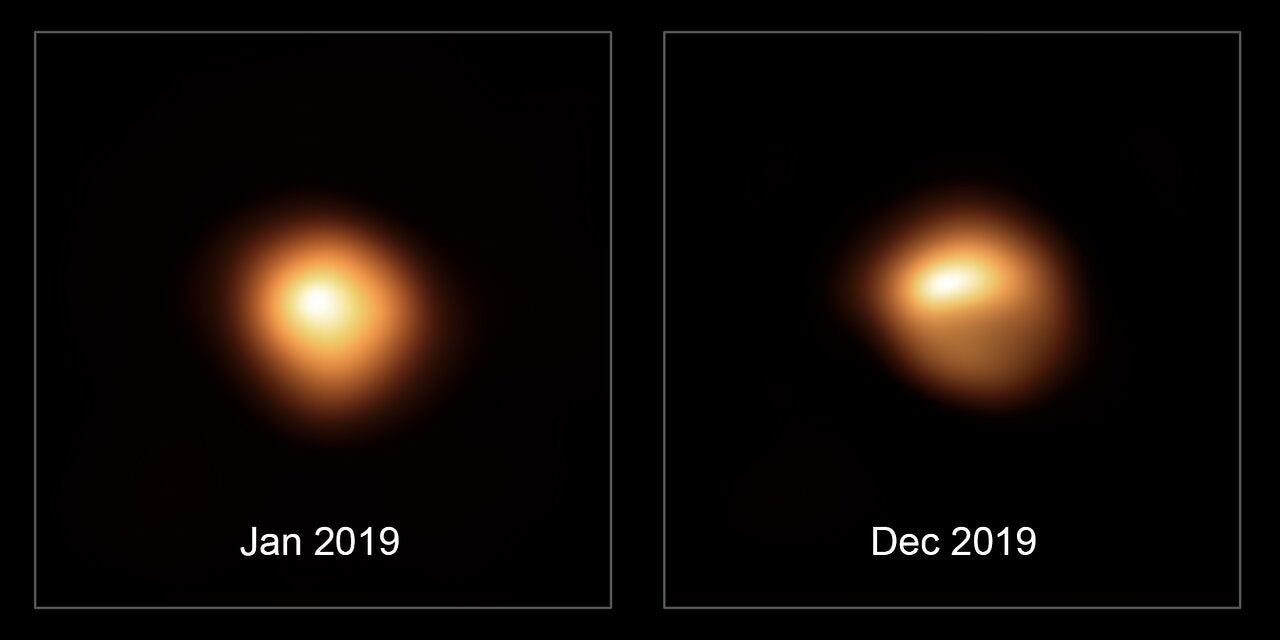 But the team doesn’t think that Betelgeuse will supernova any time soon. They hypothesise that the star is undergoing a period of activity as it pulsates and as heat travels around its surface or that it has spat out dust in our direction. This hypothesis has been supporter by another image of the star’s infrared light taken by a team from the Observatory of Paris in France.

None of these observations rule out a surprise supernova, however, and no one can say for sure when the star will burst. When it finally does, though, it will appear brighter than the Moon in the night sky and be visible even during the daytime. We’re just hoping the big kaboom is on the closer end of the 100,000-year window that astronomers have predicted for this event.