'The First Thing That Comes Up on Google': The Nightmare of Facebook Listing Your Butthole as a Place

Samantha Rae Anna Jespersen never expected to be asked for articles of incorporation for her butthole. But that’s the kind of cold-stupid question she would come to expect over the years in a nightmarish search for a human being in the gears and cogs of the Facebook Support apparatus.

As Buzzfeed News first reported, for eight years, Samantha Rae Anna Jespersen was haunted by an unofficial location page marked “Samantha Rae Anna Jespersen’s Butthole” with a location pin near her high school home. The entry was created when she was 15, by an unknown person (as an unofficial page it was “generated by user interest”), but until this week, it still lurked at the top of her Google search results. Samantha reported the page to Facebook several times over the years, but the company claimed it did not violate its terms. Following Buzzfeed’s investigation, the page was removed. 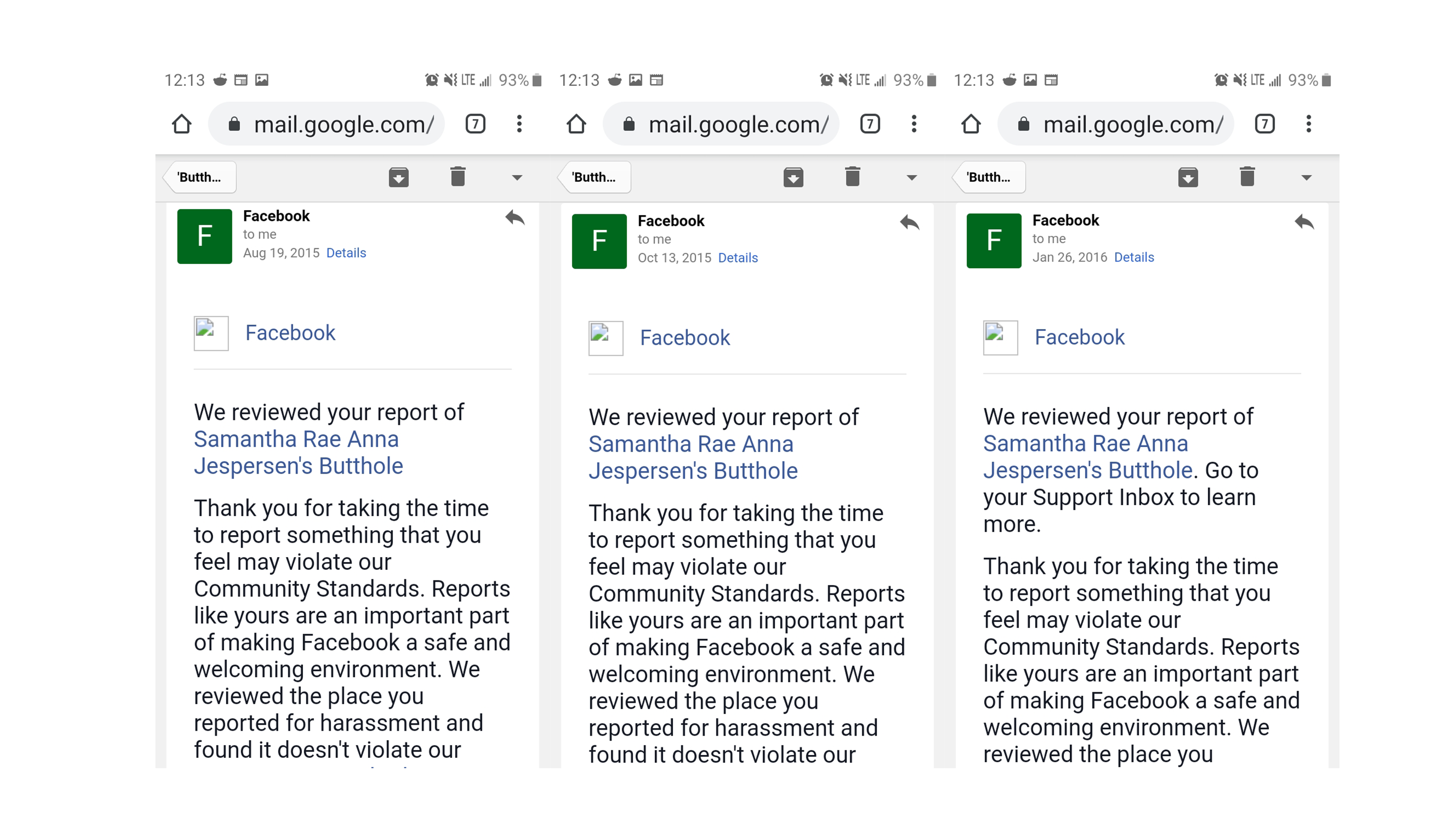 Examples of email responses from Facebook to Jesperson that were provided to Gizmodo. (Image: Samantha Rae Anna Jesperson)

Blessedly, the business image is blank, but there is no face to put to the troll who did this because Facebook automatically generated the page in 2012 when someone “checked in” to the location. Facebook met her attempts to “claim” the business by demanding a phone number associated with the business, or else a utility bill, local business license, tax certificate, and/or certificate or articles of incorporation.

From 2015 onward, Facebook maintained that the post doesn’t violate community guidelines. It’s a strange position, considering the page arguably violates most reasons Facebook provides in its dropdown menu for reporting a page: it’s not actually a public place; it is harmful; it contains a personal attack; it is spam; and it contains sexually explicit content.

In its unwavering word-for-word placations, Facebook only reassured her over and over that “we want to help you avoid things you don’t want to see on Facebook” and suggested that she unfollow the page. Facebook responded to Gizmodo’s request for comment on Wednesday afternoon asking for a link to the page, shortly after which the page was removed. Facebook has said that they will update us with more details on the case.

Samantha gave up; years passed until she thought to google her name again this week and found that the butthole page still dogs the top of her search results. After yet another hopeless report, she turned to Reddit’s legal advice community, and the post blew up. Over a phone call, Jespersen agreed to tell Gizmodo what happens when you try to communicate with a corporate bureaucracy that refuses to acknowledge that your butthole is not a business location.

Jespersen: I was laying in bed, and I googled my name, like I’ve done for years, to see if it still comes up, and it’s still the first result. I tried reporting it again the other night, and then I got a response from Facebook saying it didn’t violate any guidelines. So I just thought, fuck it, I’m going to ask Reddit because I can’t get rid of it on my own!

I tried looking it up on Facebook, and I wasn’t able to find it...

Okay, so I’ll have to give you my full name and then you’ll be able to find it. [Spells her name.] 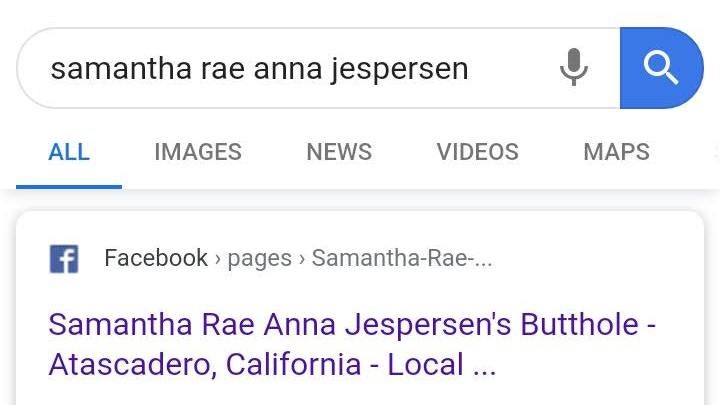 So, if you go on the page, it says that it’s been automatically generated by user interest, which is insane. How many people are interested in a 15-year-old’s butthole?

I’ve been reporting it for years – I was going through my email, and the earliest proof I have is a report from 2015. I reported it for everything to just try to get it removed, even things that it didn’t violate. I was just hoping somebody would wonder, why this is getting reported so many times, and think, let me just look at it. But that didn’t happen. I only got three rejections for all of the requests that I made to get it deleted. 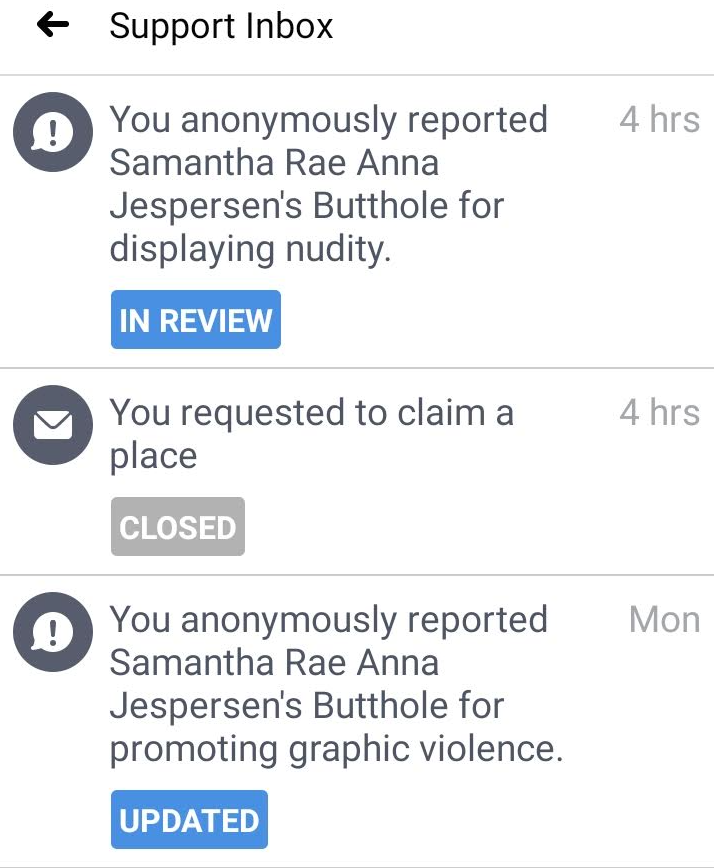 I didn’t really expect anybody to like say anything, or maybe a couple people would say, ‘there’s nothing you can do like it’s the internet, get over it.’ But now it’s gotten way more attention than I thought it would, and there’s a lot of good advice. I don’t want to do anything until I think about it, because this all kind of happened at once. But also, I’ve been reporting it for years, so I feel like Facebook should have done something about it then, and maybe they should monitor the site a little bit better.

I mean, now I’m in fuck-it mode because people sent me a link, asking me if I was a different girl. I looked up the page for her, and it’s just straight-up harassment. It’s worse than mine. Her face is Photoshopped, and there are a bunch of status updates talking trash about her – it’s also from 2012.

One person sent me a link to the page and asked me if my name was Samantha.

Did that make you worried to post this in the first place? That people might try and track you down to the page location?

I don’t live at that location anymore, specifically, so I’m not afraid of that.

You were 15 when this was posted. How has this affected your adult life?

I don’t know. I’m sure it has, since that’s the first thing that comes up on Google when you look me up, and businesses do look people up nowadays. I’m sure it’s had an impact on things. There’s no point in hiding anymore since it’s been on Google for eight years. If anybody has seen it, they haven’t said anything, possibly because they don’t want to stress me out. 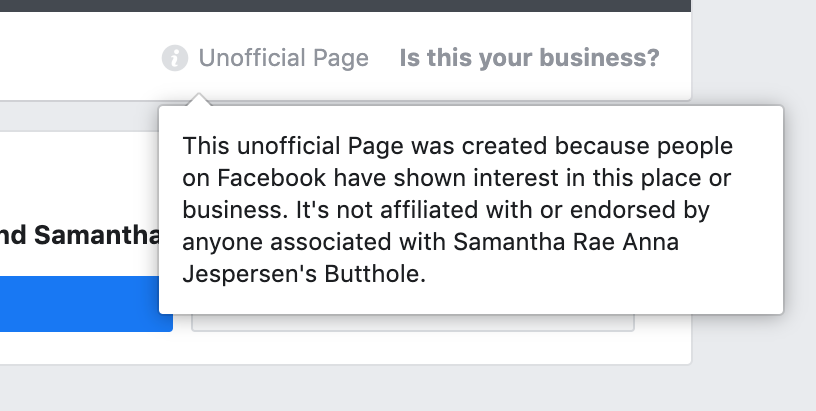 How did you first find out about this?

I’ve never seen a post about my butthole before [laughs], I’ve never seen anything that would lead up to that! I thought someone made it to mess with me, but then I saw it was generated by Facebook. I just saw the page and reported it [in 2015] and told one of my friends this happened.

Do your friends and family know about this?

I told my boyfriend about it when we started dating. I was just like, ‘this is so embarrassing, but this is a thing, and I don’t want you to find it.’ And then I told my sisters, and when I saw their reaction, and I thought I might as well try to help people.

After Jespersen posted on r/legaladvice, a person claiming to be a Facebook support representative appeared in her inbox asking for the link to the page, though they offered no credentials. Instead, she published a notice to Facebook on her personal blog.

“Facebook, I’ve spent 8 years crossing my fingers that no employer finds this page that I’ve so desperately attempted to get deleted,” she wrote. “I’m done asking and now I’m demanding. Pay more attention to your platform. Don’t automatically generate the location of CHILDREN’S genitals. Mark, stop smoking meats for five minutes and treat the people that keep you rich like they matter.”