I have a never-ending list of quests to find the perfect every day carry accessories, which includes a drawn out hunt for the ideal water bottle. At CES last month I spent a week with Matador’s new squishy, packable water bottle and while it’s not my holy grail of hydration, it’s a nice option when travelling and trying to maximise space in your bags.

If you’re not familiar with Matador it’s a company that has, for the most part, focused on making useful travel items that pack down extremely compact so they’re easy to stash in a backpack, suitcase, or even a coat pocket. The company’s latest creation is a Packable Water Bottle that carries on that tradition of extreme portability, and if you’re really strapped for space, or like to carry a couple of extra bottles for times when you think you’ll need more water, it works well. But it also comes with some trade-offs that make it a challenging choice as an every day carry.

What is it?: A soft-side water bottle made from thermoplastic polyurethane that's easy to flatten when empty for easier storage.

Like: Lightweight when empty and easy to cram away into a pocket or a bag.

Dislike: The bottle fills from the bottom and the opening can be a challenge to open if your hands are already full.

The bottle feels like it’s made of soft silicone, similar to those re-usable sandwich bags that have become a popular alternative to plastic baggies as of late, but it’s actually made from thermoplastic polyurethane which is both BPA and PVC-free. Unlike flat-pack bottles made from cheaper plastics, Matador’s bottle feels rugged and durable and I particularly like that it doesn’t show crease lines after it’s been scrunched up and stuffed into a bag. It looks new all the time. 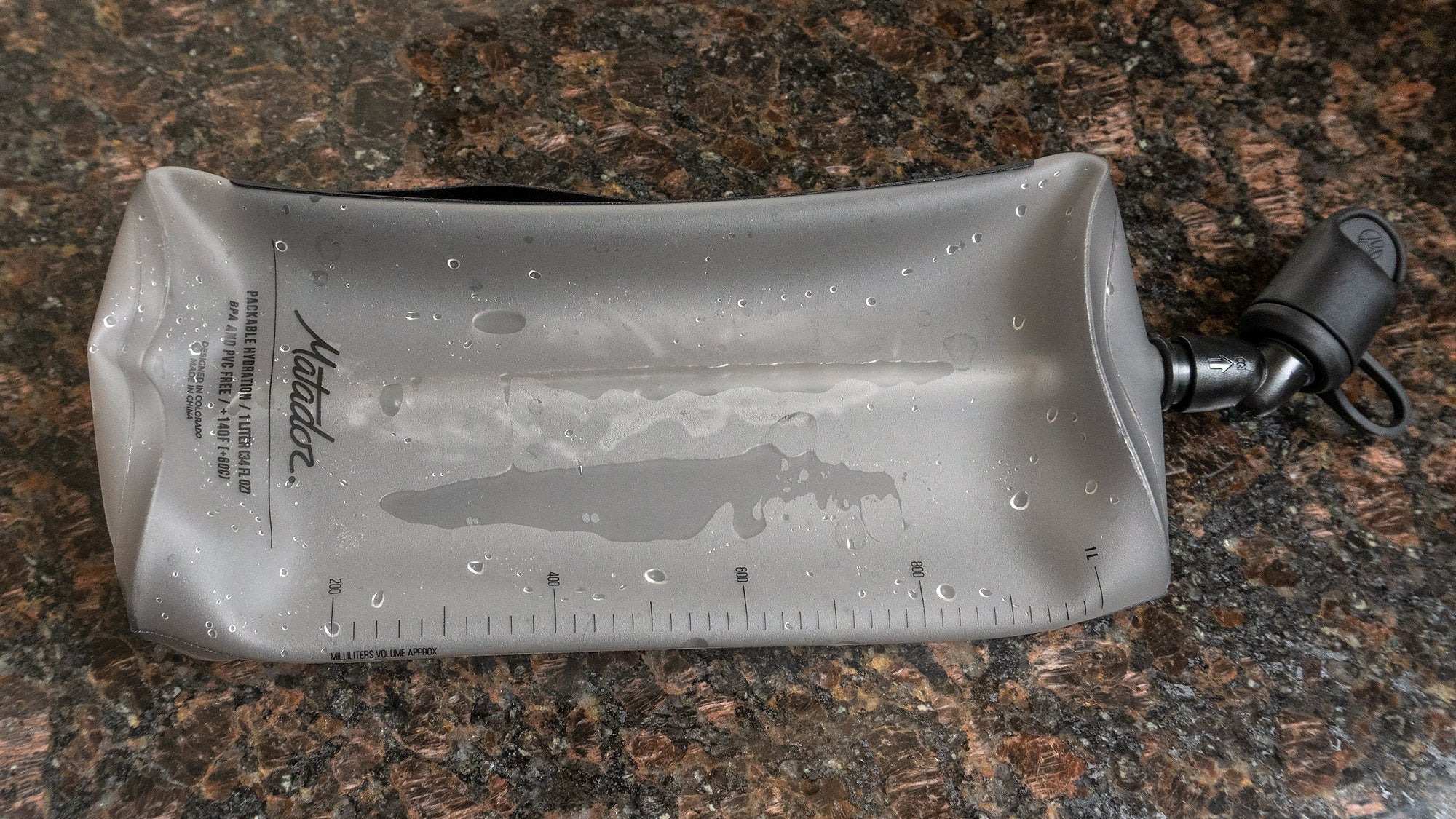 Matador’s packable bottle does squish down flat when empty, but it can’t be rolled up due to a semi-rigid plastic straw running along its length. (Photo: Andrew Liszewski/Gizmodo)

However, unlike those cheaper alternatives, when the Matador Packable Water Bottle is empty and flat it can’t be rolled up into a smaller footprint as there’s a semi-rigid plastic straw running down its length. It does make sipping from the bottle easier, but being able to remove the straw to make the bottle pack down even smaller would be a welcome option.

A bite valve ensures you’re not going to accidentally spill on yourself. (Photo: Andrew Liszewski/Gizmodo)

And an additional pop-up locking mechanism ensures there’s little chance the bottle will leak from the top. (Photo: Andrew Liszewski/Gizmodo)

A removable cap on top reveals a spout with a bite valve that prevents leaks (you need to gently bite it with your teeth to allow liquid to flow) as well as an additional locking mechanism at the base of the spout that pops up and down to ensure the bottle doesn’t accidentally drain when you don’t want it to. It all works well, and the tethered cap that will never go missing is a feature that every single water bottle should be required by law to include.

The Matador bottle is filled from the bottom where a plastic zipper is used to seal a wide opening. (Photo: Andrew Liszewski/Gizmodo)

The plastic zipper is thicker and more durable than what you’ll find on Ziploc plastic bags, but takes a bit more effort to properly seal tight. (Photo: Andrew Liszewski/Gizmodo)

What prevents the Matador Packable Water Bottle from becoming my new every day carry, however, is how you fill it. Instead of unscrewing and removing the spout and straw on the top, on the bottom of the bottle you’ll find a wide opening that’s sealed with the same kind of plastic zippers you find on Ziploc brand bags, but considerably thicker and stronger. You need to use a bit of force to get it open, and even more force to seal it back up afterwards, requiring two hands and most of your fingers. 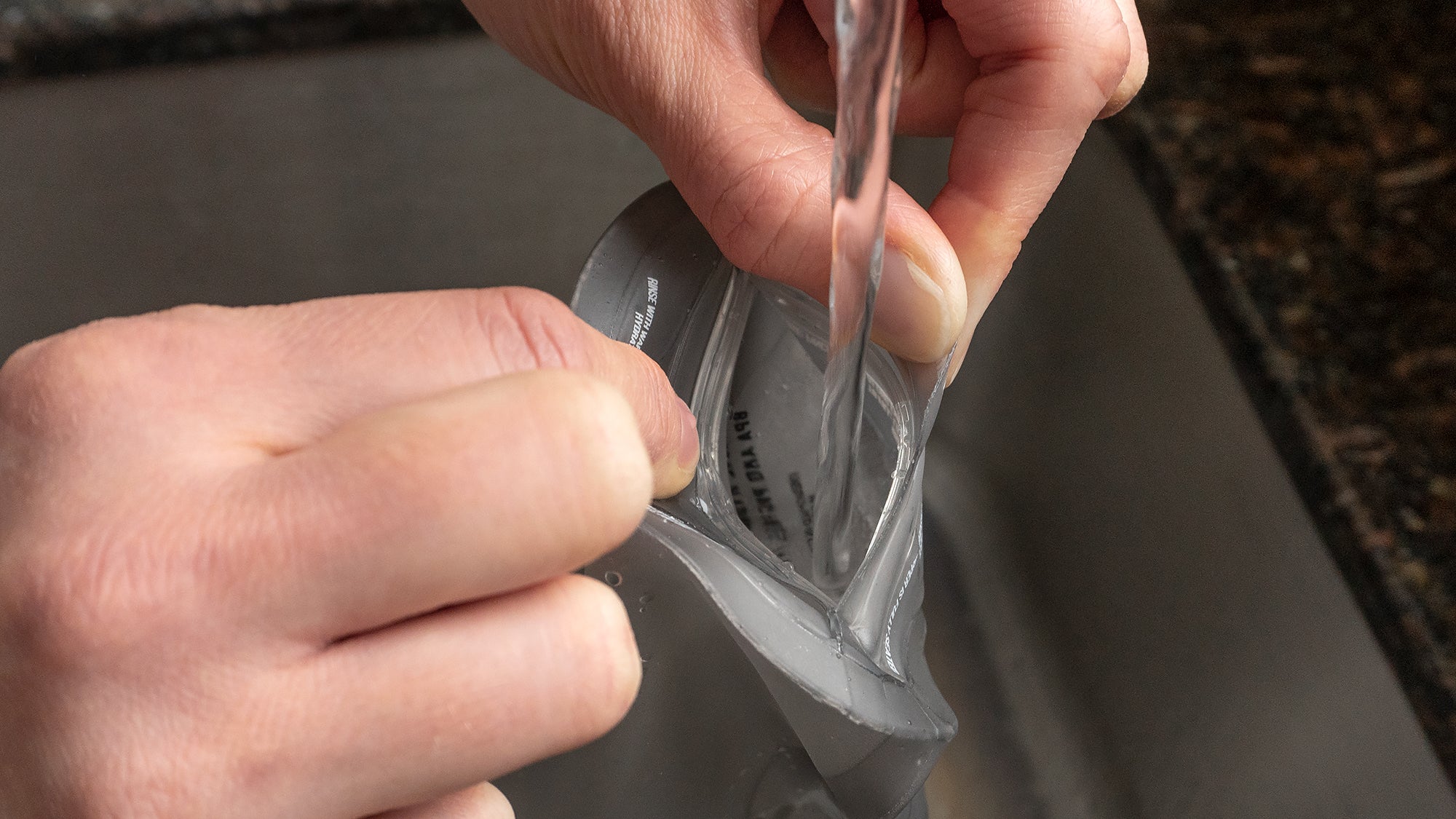 It’s far from an impossible feat, but it did make filling the bottle from an airport drinking fountain (you can’t pass through security with it full) quite a challenge as the design of the opening required two hands to hold it open so water doesn’t spill all over the place, leaving me with exactly no hands to activate the button on the fountain I was using. It’s manageable, and eventually, I developed a few tricks to make filling the bottle easier, but it never became as simple as it is with a rigid plastic or metal bottle where you simply twist off its lid and hold it one-handed under a stream of water.

When I first discovered the bottle was filled from the bottom I was immediately concerned about leaks, or the opening accidentally bursting open when the bottle was squeezed and its contents put under pressure. But so far I’ve found that as long as you make sure that plastic zipper is sealed from end to end, not a single drop makes it through, even when squeezing the bottle with more force than it will ever experience during day to day use. It works, but the odd design choice not only makes the bottle challenging to fill, but it also makes it hard to clean (occasionally you’ll want to get a cloth or a scrub brush up in there) and hard to dry when you’re done using it. I usually have to stick something in the gap to hold it open when I want the bottle to completely dry out overnight. 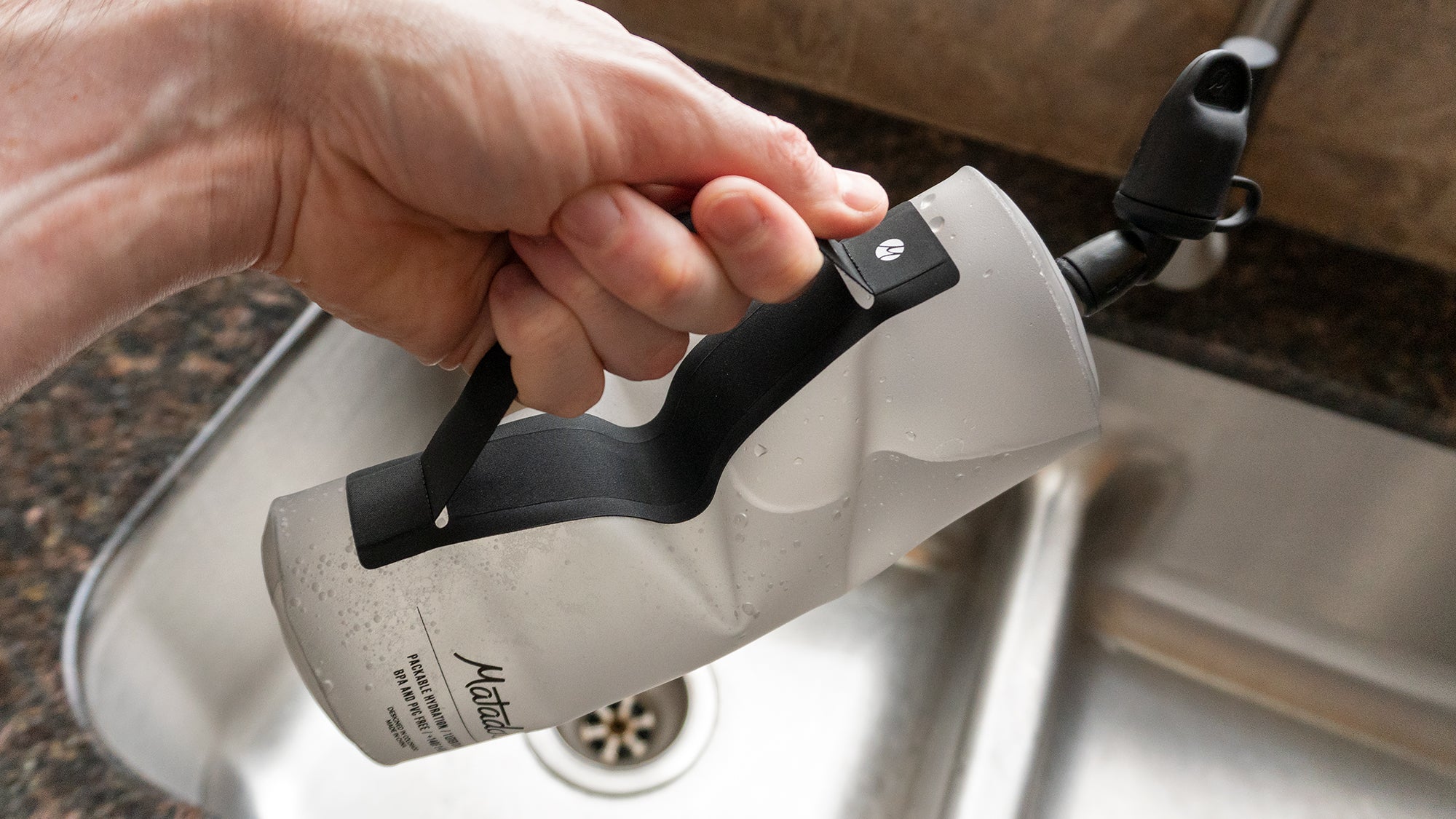 A carrying handle is built right in. (Photo: Andrew Liszewski/Gizmodo)

On the side of the bottle Matador has included a carrying handle that does make the bottle easier to hold as it tends to get floppy when half-full. But an additional loop closer to the top would also be welcome so the bottle could be secured to a pack using something like a carabiner. Even when the bottle is full it can be a little floppy and on a couple of occasions, it wiggled its way out of a shallow water bottle pocket on the side of my backpack.

Despite the challenges with its unorthodox design, I do find myself throwing the Matador Packable Water Bottle in my bag for day trips or longer excursions as it never hurts to have a reliable way to carry some extra water. And even if it doesn’t get used the bottle adds almost no weight to my pack when it’s empty. But it hasn’t replaced the metal water bottles I carry every day. They’re heavier and a little more cumbersome to carry, but filling them doesn’t leave me wishing I had two or three extra hands at my disposal.