Last year I reviewed Under Armour’s HOVR Infinite shoes, which sync with your smartphone to offer running data from the built-in Bluetooth chip. I was pleasantly surprised by how much I enjoyed working out in them. I expected the shoes to be more gimmick than substance, but the personalised gait-coaching actually helped me shave two minutes off my average mile time. They died a noble death after I ran more than 300 miles in them. So, as you might imagine, I had higher expectations for the latest addition to the HOVR lineup, the Machina.

On paper, the updated shoe sounds promising. Under Armour’s announcement for the Machina emphasises how the shoe’s construction hits the sweet spot between speed and comfort. In particular, it highlights a new propulsion plate: a two-pronged, carbon-filled spring plate that supposedly helps you run faster by keeping turnover quick and giving your foot a more powerful push-off. It also has a new uncaged midsole and about 20 per cent more cushioning than the Infinite. That’s the kind of sports jargon that you sort of nod your head along to, but wonder if it actually has an impact on your performance. But comfy, lightweight shoes are an attractive proposition for anyone who regularly runs distances longer than a 5K – even if you don’t necessarily buy into the marketing.

What is it?: Smart running shoes

Don't Like: I'm blind now from looking at them

The main thing that caught my eye about the Machine was the fact that Under Armour addressed the main beef I had with the Infinite: real-time coaching. With the newest shoes, you still get data with regard to cadence and stride, in addition to foot strike angle and ground contact time. There’s also a new screen within the MapMyRun app – which you need to download to make use of the coaching features – that lets you see in real-time whether you’re maintaining the proper cadence for your target pace.

All this made me pretty stoked to try out the Machina. And then I opened the box. My eyes bled. It’s my fault, really. I mostly glossed over the promotional photos featuring this garish pinkish-orange monstrosity. I assumed my review unit would be something tamer, like the subtler grey-and-pink or black-and-white versions of the shoe. But, no. My clown shoes had arrived in all their radioactive glory.

The Gizmodo office witnessed my despair first-hand as I let out an anguished cry: “WHY?” A few coworkers offered condolences, and others explained: “Really bright pink is in now.” I was shown similar kicks designed by rappers whose names I have since forgotten. Another colleague noted that, well, running shoes be ugly like that. One coworker, who shall remain nameless for her dignity, said she actually liked them. No one could give me a good reason as to why Under Armour had chosen pale mauve as the accent colour to such a violent shade of salmon. “Because it’s for women?” one coworker suggested. Inside, I cried a little because, yes, the men’s version has a more sensible black accent. 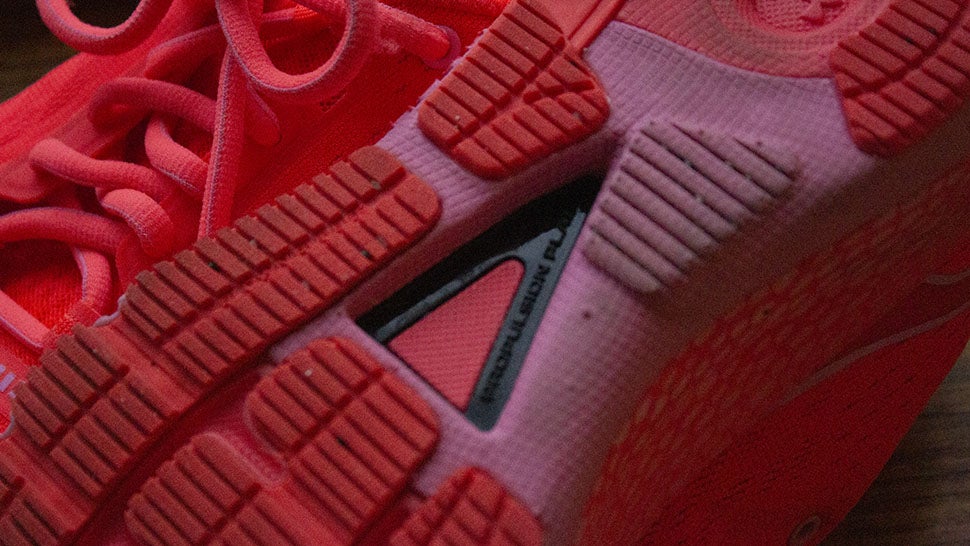 Excuse the grody bottoms – I did run in these. But you can see the propulsion plate. It’s supposed to make you run faster via better push-offs and faster turnover. (Photo: Victoria Song/Gizmodo)

To be fair, I recognise this is a dramatic detour in a review that’s ultimately about smart trainers and whether they’re any good. In all fairness, style is a consideration when buying running gear, and I wouldn’t have written a thing if I wasn’t so viscerally taken aback by this colour choice. (Though, after a night run, I can verify that you probably don’t need reflective tape if you wear these because everyone will be able to spot you from miles away.) But after some grumbling, I sucked it up, laced up, and put upwards of 15 miles on these things.

Comfort-wise, you can definitely feel the extra 20 per cent of cushioning. That much is apparent the moment you slip them onto your feet. On my weekly long run, I noticed it took about fifteen minutes longer for my knee to start twinging. As for the propulsion plate: I’m not sure if it made me much faster, but it does feel different when I’m pushing off the ground. I did run my fastest-ever one-mile split in these shoes, but I can’t tell if it was the plate or the coaching that had more of an impact. (Or perhaps neither! Maybe it was a good night’s rest.) 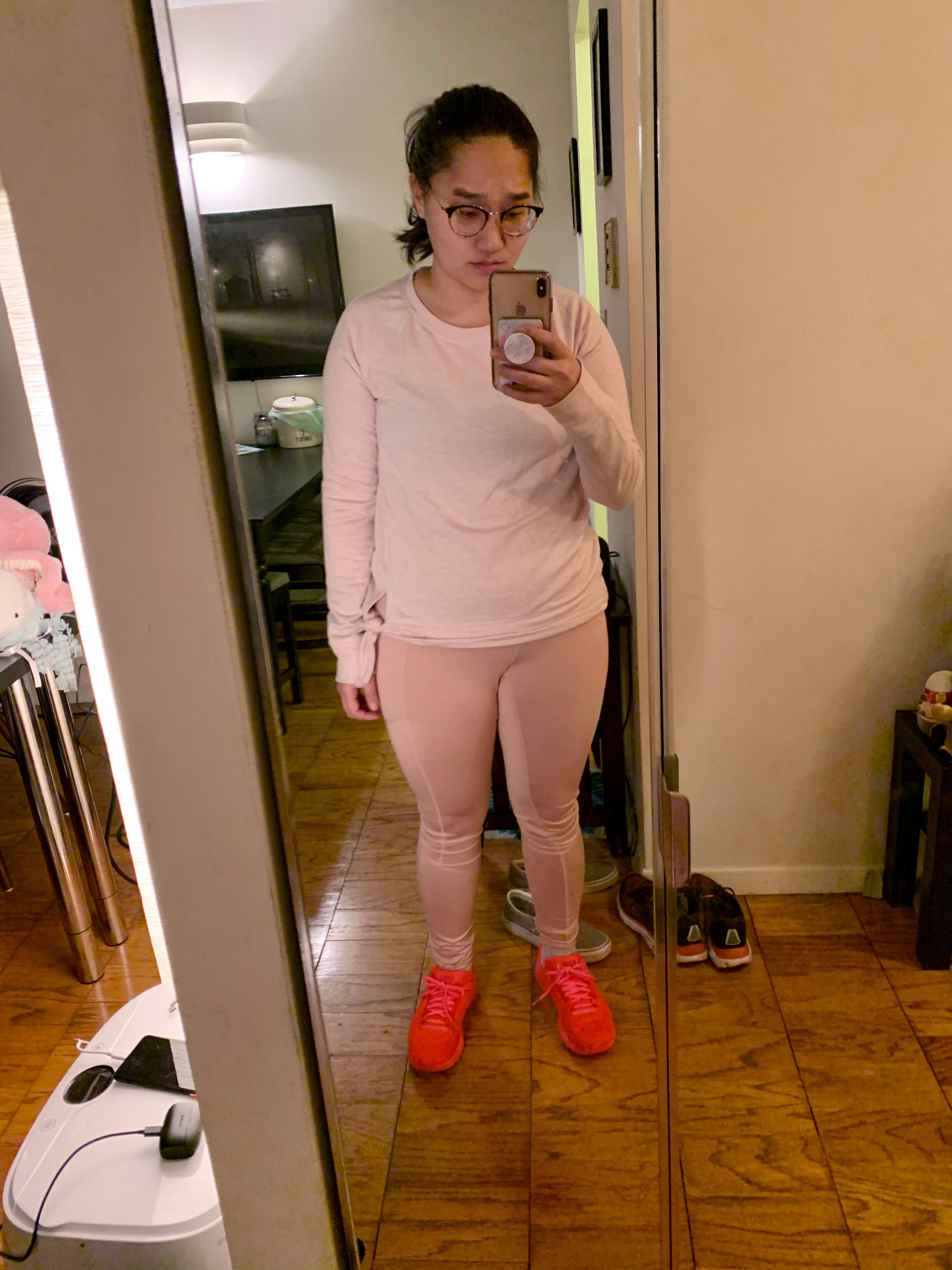 I was told these shoes made me look like an “aggressive strawberry.” I was visible for miles. (Photo: Victoria Song/Gizmodo)

On the other hand, I did notice I had way less traction on a rainy day. I slid a few times while running over metal in a way that was never an issue with the Infinites. Nothing too major, but it made me more conscious of avoiding certain types of terrain during runs.

I found the new real-time coaching feature helpful. I wasn’t a huge fan of the new screen – my cadence is already where I need it to be, and I couldn’t customise the metrics shown to display my stride instead. However, the mid-run audio cues were pretty spot-on. When I started slowing down during interval training, I’d get a reminder and tips on how to improve my form. For instance, I was running slower than my target pace and I heard a nice robot lady tell me something along the lines of, “Your cadence is on target, but you’re running below pace. Try maintaining cadence while lengthening your stride.” When I’d done that, I got another audio cue telling me I was in the appropriate range.

This is actually pretty useful if you’re struggling with bad training habits or trying to improve form. I’m trying to break my 10K time, but I have the awful habit of running too fast out the gate and progressively slowing down in the second half of my run. While training, I was reminded several times to slow down my pace early on and, lo and behold, posted my best average times in weeks.

What the new screen in the MapMyRun app looks like. (Screenshot: Victoria Song/Gizmodo)

The feature isn’t perfect, however. I found audio cues were sometimes a smidge laggy – especially when doing short strides or intervals. I’d get a cue, but had already moved on to a different pace so it wasn’t the most accurate advice for me in that exact second. This wasn’t as much of an issue when doing easy runs or long runs, where the pace was more consistent throughout.

Also, one thing about the HOVR line is that there’s only a chip in your right shoe. If there’s one thing I learned from trying out Asics’ run analyser at this year’s CES, it’s that I am not a symmetrical runner. I tend to heavily favour my left side in yoga and running, so I know I’m only getting half the picture with the Machina. I tried out Asics’ EvoRide smart trainers at CES and, because both shoes have chips in them, I was able to get more context out of my personal gait.

For the average running enthusiast, however, that’s not too big of a deal. Under Armour gives you plenty of actionable tips in-app about how to improve – even if it’s based on data from a single foot. Unless you’re an Olympic athlete and every little detail matters, the data you learn from just the right shoe is fine. But it’s something to consider, as some smart trainers out there do focus on both feet.

Another thing to consider is the price. The £140 Machina cost £20 more than the Infinite. While £120 is fairly average for a good pair of dumb running shoes, £140 starts to creep into ‘Hey, this is getting kind of expensive’ territory. (That said, £140 is not so bad for smart trainers.) This is especially true if you’re a long-distance monster who puts on hundreds of miles on your shoes in a matter of weeks. I haven’t had these for terribly long, but I did get over 300 miles on my pair of Infinites before I started to feel it in my knees. How long your shoes last depends on your individual running habits and terrain, but you should comfortably get at least 300 miles out of the Machina. One neat thing? With the Infinite, I got email updates from Under Armour telling me when I hit 25 per cent of my shoes’ lifetime mileage. (I felt the shoes needed replacing when they hit about 75 per cent of their estimated lifetime). 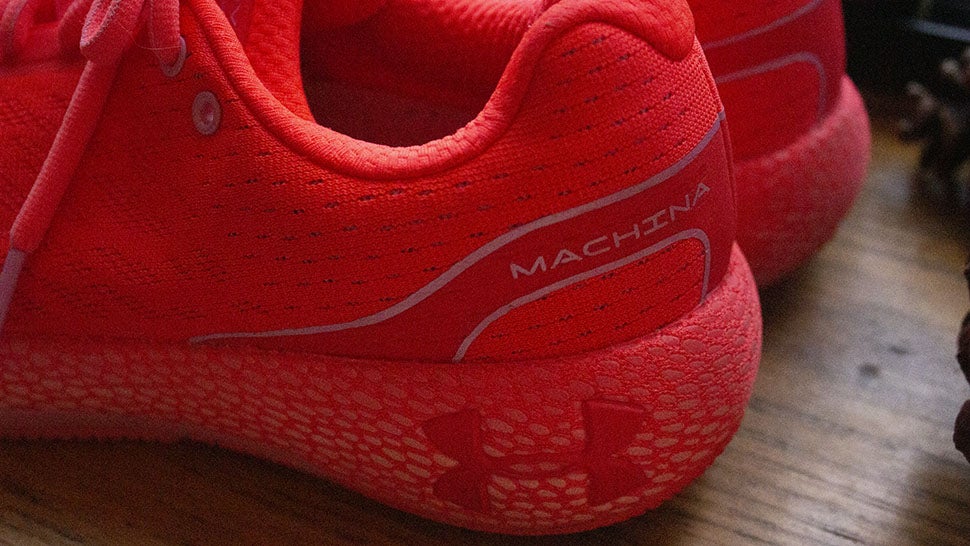 Cushiony. But why mauve? Why? Who thought light purple and violent pink-orange was a good idea? (Photo: Victoria Song/Gizmodo)

But are the Machinas worth the money? Well, that depends. Do you like data? Are you frustrated by your training? Then yeah, the HOVR Machina is a decent investment. Are you already using the MapMyRun app? If not, how attached are you to your running app of choice? If you’re already an avid MapMyRun user, then these shoes make a lot of sense. If you absolutely love Runkeeper, Runtastic, or Strava, it might be more nuisance than it's worth. Sure, you can sync your activity between some of these apps, but it can also be a total pain – especially since you have to use MapMyRun for real-time coaching.

Personally, I like the fit, comfort, data, and coaching enough that, in spite of the colour, I will likely continue to run in the Machinas until they crap out on me. For the curious, trying a pair is also relatively low-risk. The shoes cost more than their dumber counterparts, but they’re also not the most expensive running shoes out there – even with the whole connected aspect. If you don’t like the smart part, they work perfectly fine as regular shoes. Just do me a favour and buy the less hideous versions.