Swimmers in warm coastal regions often exhibit sting-like symptoms despite not coming into direct contact with venomous animals such as jellyfish. Scientists have now pinpointed the cause of these “stinging waters” to a particular jellyfish equipped with its own weaponized mucus.

New research published today in Nature Communications Biology describes the “cassiosome,” a stinging cellular structure found within the mucus of Cassiopea xamachana, an aquatic species commonly referred to as upside-down jellyfish. Laced with toxins, the microscopic cassiomes are released by the jellyfish in vast quantities, resulting in a well-documented phenomenon known as “stinging water,” according to the new research, co-authored by marine biologist Cheryl Ames from the US Naval Research Laboratory.

Indeed, snorkelers in Florida and the Caribbean who explore mangrove forests inhabited by upside-down jellyfish will sometimes experience an itchy, warm-to-burning sensation despite not coming into contact with the animals, who lie on the shallow seafloor with their tentacles raised upwards. These sting-like sensations aren’t harmful to humans, but they sometimes cause enough discomfort that affected divers will want to get out of the water, explained Ames in an email to Gizmodo. 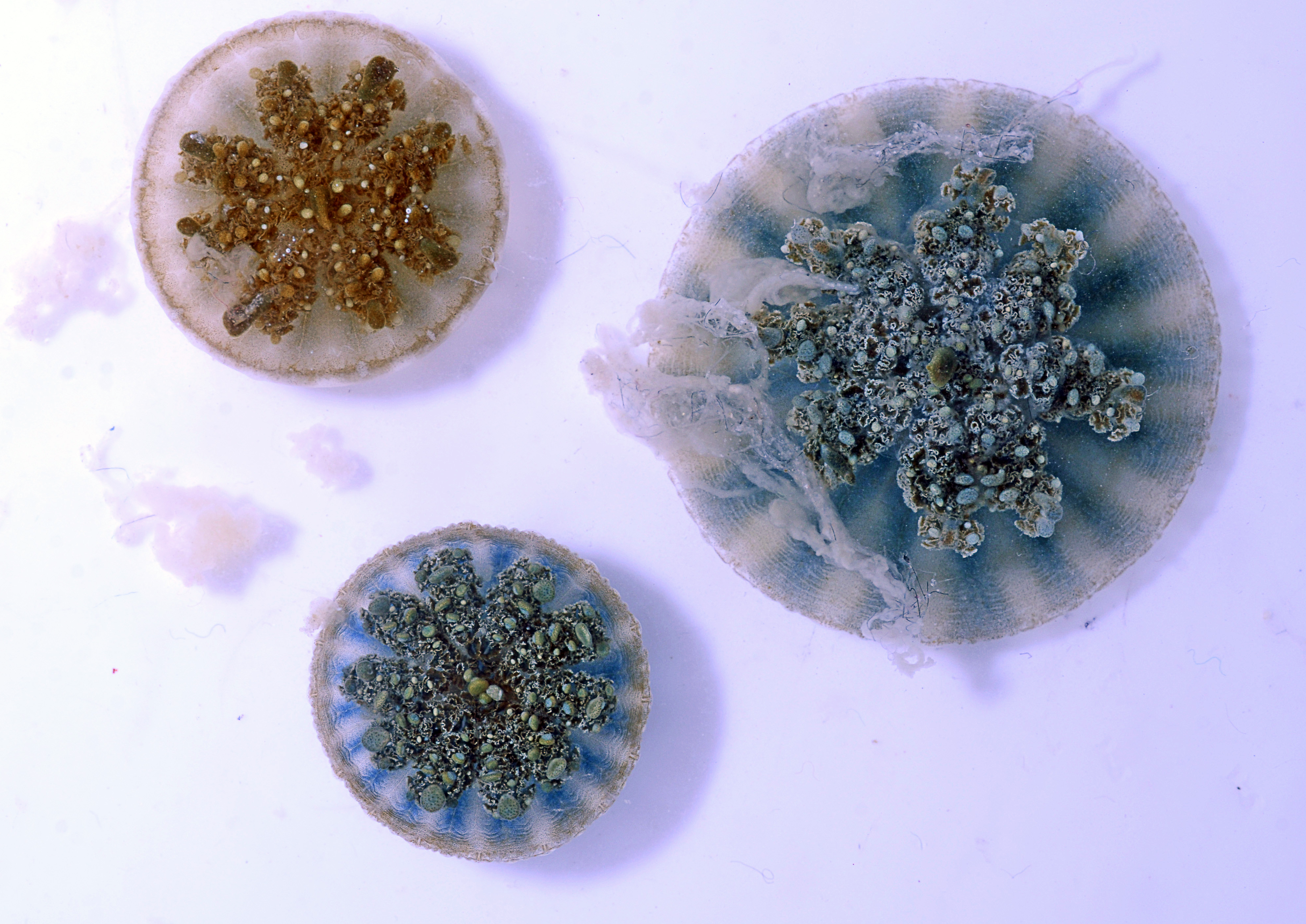 An overhead view of three upside-down jellyfish, including tufts of their murky, stinging mucus. (Image: Allen Collins and Cheryl Ames)

Jellyfish typically have to touch their prey to inject their venom, leading scientists to attribute stinging water to other causes, such as disembodied bits of jellyfish tentacles, larval stages of jellyfish, or sea anemones. That the mucus of Cassiopea xamachana might be responsible for creating stinging water has been suspected for years, but the exact mechanism behind this phenomenon remained a mystery.

“The answer was right under our noses,” said Ames. “We took the mucus and put it under a microscope, and when we saw the tiny, gyrating, self-propelled masses, we knew we were onto something new to science.”

Looking closely at these lumpy orbs, Ames and her colleagues noticed they were coated with thousands of toxin-filled stinging capsules known as nematocysts, which are normally found in the tentacles. The cassisomes, which the authors described as “grenades” in the paper, are able to move around thanks to cilia located on other cells in the overall cellular cluster. What’s more, the cores of the cassiosomes were found to be filled with a symbiotic single-celled algae that inhabits other parts of the jellyfish.

During tests, the researchers disturbed the jellyfish, causing them to release copious amounts of the cassiomes, which are normally housed in small cavities on their appendages. Once released, the toxic balls integrated themselves within the jellyfish mucus.

Normally, Cassiopea xamachana are sustained by their interloping photosynthetic algae, but the new research suggests the cassiosome-packed mucus might represent an alternative form of feeding, not just a defensive measure.

“Cassiopea, like its common name upside-down jellyfish suggests, is found facing upward on the bottom of shallow coastal waters in bays, mangroves and lagoons, pulsing rhythmically in groups of hundreds to thousands of individuals,” said Ames. “Cassiopea uses the edges of its umbrella to push water over its frilly feeding structures, sucking in mucus filled with prey—tiny shrimp and other plankton—it captures in the net-like mucus it casts. We now know that the prey are captured after being stunned and killed on contact with the [mobile] cassiosomes in the mucus.”

It’s pretty amazing what evolution can come up with, but Cassiopea xamachana, like other jellyfish, has had plenty of time to evolve, having emerged hundreds of millions of years ago.

Ames hopes this scientific explanation to stinging water will convince divers to wear protective clothing in areas where the upside-down jellyfish are present. The finding is relevant, she said, for folks managing recreational snorkelling tours, military diving personnel during training operations, and public aquarium staff who might handle stinging water.