Wacom One Review: Well Balanced, But Cable Management a Chore

With continued competition from Apple as cheaper iPads are now gaining support for the Apple Pencil, Wacom has followed up on its £530 Cintiq 16 from last year with the even cheaper £360 Wacom One. As with larger Cintiq displays and tablets, the Wacom One is a secondary display, not a real tablet with a dedicated OS, or even a battery. Targeted at aspiring artists and students it lacks some important features you’ll find on more expensive Wacom tablets, but also manages to introduce support for Android devices for the first time – just don’t expect an iPad experience quite yet.

What is it?: Wacom's most affordable LCD drawing tablet that now works with select Android devices.

Like: For the price it makes an excellent creative tool available to more aspiring artists.

Dislike: Android connectivity is neat, but the OS needs a bit of work to make it more useful.

The Wacom One’s 13.3-inch LCD display is a bit smaller than the Cintiq 16 which we measured to be around 15.6 inches in size, but features the same 1920x1080 resolution and a considerably smaller footprint than its predecessor, despite the generously sized bezel framing the display. It’s lighter too, and after testing Wacom tablets for years it’s the company’s first LCD tablet that I would actually consider travelling with. It’s finally svelte enough to slip into a bag’s laptop slot, which makes this a compelling option for artists who already have a large Cintiq setup in their offices, but are looking for something smaller and more portable when hitting the road.

A fabric loop for securing the stylus is basic, but it gets the job done. (Photo: Andrew Liszewski/Gizmodo)

Power is the only button you’ll find on the Wacom One as it’s lacking the useful shortcut buttons of more expensive Wacom tablets. (Photo: Andrew Liszewski/Gizmodo)

The Wacom One’s connectivity cable is removable so the tablet is easier to transport. (Photo: Andrew Liszewski/Gizmodo)

A pair of folding legs on the underside of the Wacom One help prop it up at a better angle for working on desks, and they hide a set of replacement stylus tips, plus a removal tool. (Photo: Andrew Liszewski/Gizmodo)

Folding legs on the back of the Wacom One allow you to prop the tablet up on a desk for a better working angle, and underneath one of those legs is a hidden set of replacement nibs for the included Wacom stylus which can be secured, when not in use, through a fabric loop on the top of the tablet.

The only button you’ll find on the Wacom One is for power located on its top edge, and that’s actually one of the biggest trade-offs with this tablet. The clean face on the front of the tablet is reminiscent of the iPad, but this isn’t a tablet designed for media consumption; it’s a productivity tool and the lack of any and all physical shortcut buttons on the screen’s bezel will make it challenging for artists used to working with other Wacom products. The Wacom One’s screen also only works with Wacom styluses, not your fingers, so if you’re used to relying on keyboard shortcuts in tools like Adobe Photoshop or Illustrator, you’ll need to keep your laptop or computer’s keyboard in reach because you don’t even have the option to do an on-screen pinch gesture for quick zooms. 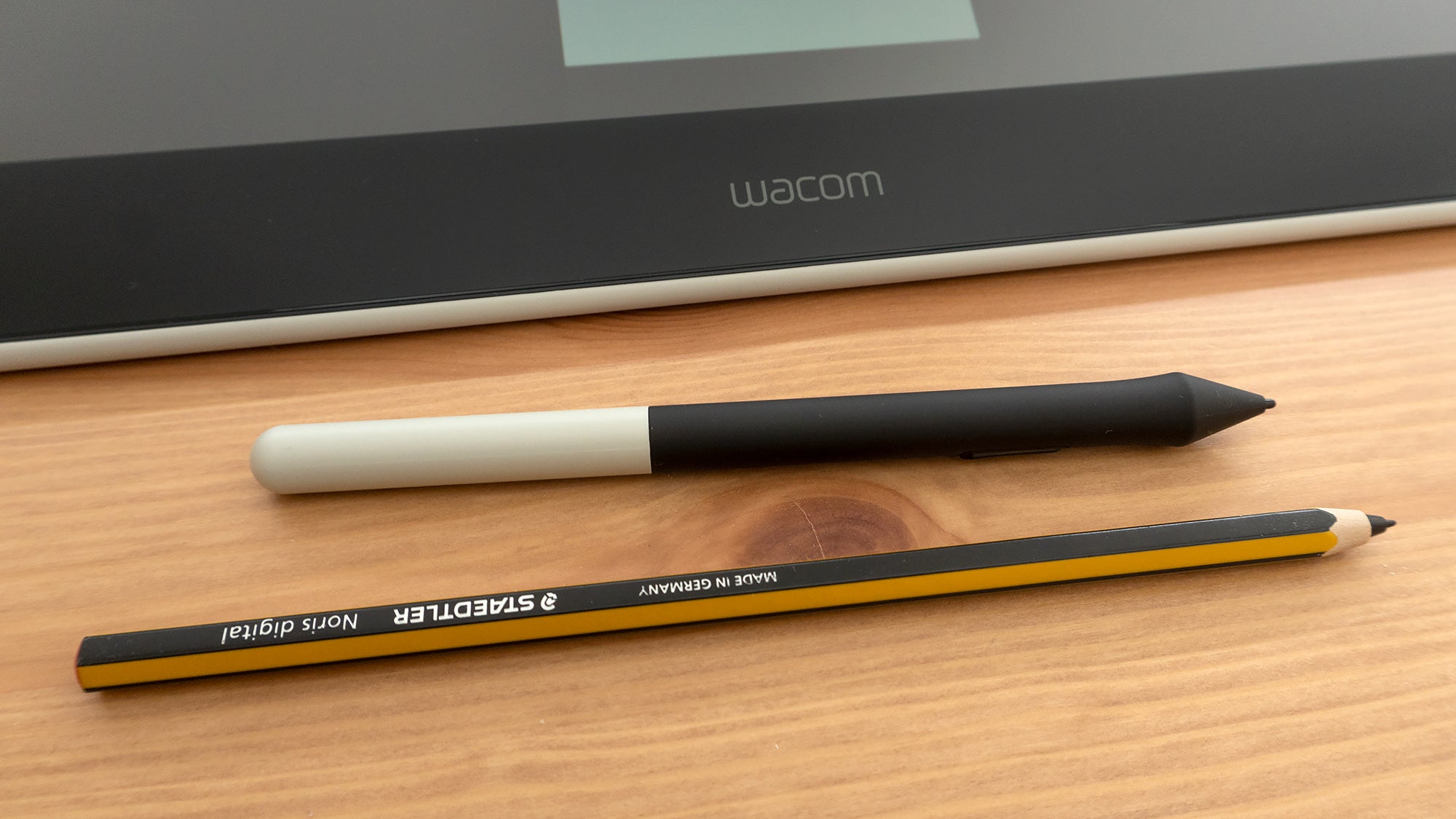 The stylus included with the Wacom One is basic, with just a single shortcut button on the side. But it can be traded for third-party Wacom-compatible alternatives, like this faux-wood pencil from Staedtler. (Photo: Andrew Liszewski/Gizmodo)

Even the included Wacom stylus offers basic functionality with a single shortcut button on the side instead of a two-way rocker, and no eraser tip on the bottom end for quickly accessing other tools. It’s something you can always upgrade later if you find yourself yearning for one of Wacom’s more advanced styluses though. You can also swap it out for third-party styluses from companies like Staedtler who license Wacom’s technology. Along with the Wacom One I was able to test out a faux-pencil stylus from Staedtler that I actually find myself using it more often for doodling, but without any shortcut buttons its usefulness is limited.

As with last year’s Wacom Cintiq 16, I find the gap between the surface of the Wacom One and the LCD screen beneath to be a bit too large for my tastes and workflows. It’s fine for painting and drawing, but I find it distracting when trying to close crop and mask objects in Photoshop. (Photo: Andrew Liszewski/Gizmodo)

The brightness of the Wacom One’s LCD can’t even begin to compare to what your smartphone’s screen is capable of, so you’ll want to stick to darker places when working. (Photo: Andrew Liszewski/Gizmodo)

The Wacom One’s matte finish is supposed to reduce glare, but the limited brightness means it will be hard to avoid, and occasionally a nuisance when you’re trying to work. (Photo: Andrew Liszewski/Gizmodo)

The Wacom One’s LCD screen isn’t going to win any benchmarking awards as far as displays go. Its colour fidelity is limited to 72 per cent of the NTSC colour gamut and photographs tend to look a little flat on it. As with the Cintiq 16, this isn’t a display you’ll want to rely on for colour-critical work or final proofing. It also features the same matte finish as other Wacom LCD tablets which gives an excellent tactile experience with the stylus, but I find it also contributes to glare quite a bit. That, and the fact that the Wacom One’s LCD doesn’t even come close to the brightness levels of your laptop or smartphone’s screen, means that the Wacom One is probably best suited for use in darker workspaces. 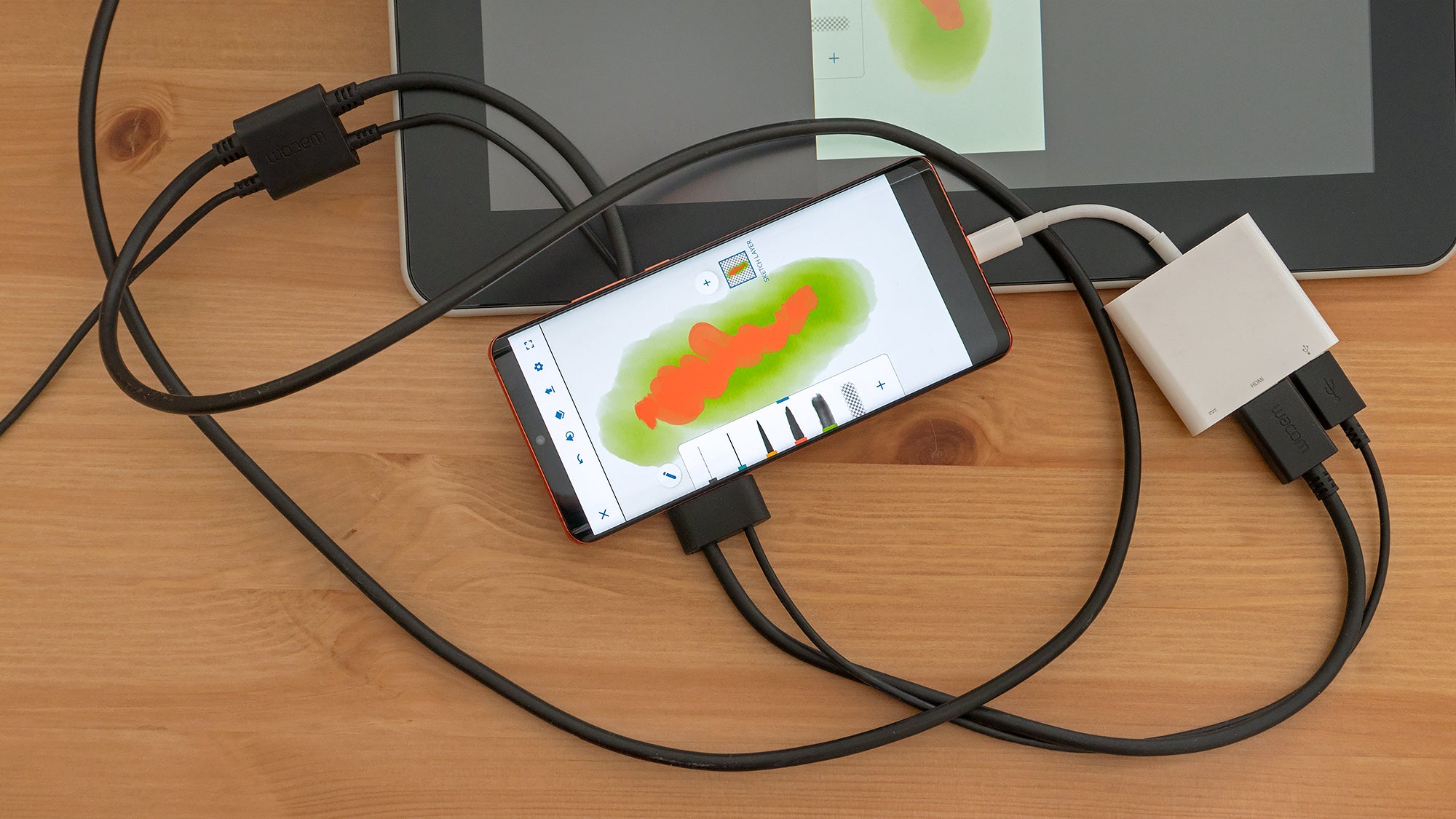 There’s no wireless connectivity and no rechargeable battery on the Wacom One, so you’ll need to bring this cumbersome breakout cable with you everywhere you go. (Photo: Andrew Liszewski/Gizmodo)

As for the Wacom One’s support for Android devices, I like the potential, but out of the gate it’s a mixed bag. It works just fine, allowing you to use Wacom’s excellent tablet and stylus hardware with many creative-focused Android apps from companies like Adobe and Autodesk, and even Notes apps that allow you to sketch, but support is hit and miss. For starters, the Wacom One is only supported by a very limited number of Android devices, including the recent Samsung Galaxies and Galaxy Notes, as well as a handful of devices from Huawei, including the P30 Pro which I used for testing. Even then, supported features in the various apps varies from device to device, and while you can use the Wacom One in portrait mode, I found myself sticking to drawing and painting apps that would automatically shift to landscape mode on screen. Not all of them do.

My biggest gripe is the breakout cable needed to connect the Wacom One to a smartphone. You’ll need to find a USB-C adapter that supports HDMI, and then the cabling that Wacom bundles. That cabling includes a power adapter because unfortunately, the Wacom One doesn’t include a rechargeable battery. Despite its portability, trying to juggle all of this on your lap while trying to get work done while waiting for a flight would be a workflow nightmare. I understand the complications of the Wacom One being a completely wireless affair, but that would rank high on my wish list for future versions of the product down the line.

Despite all the functionality trade-offs, the Wacom One still features the company’s excellent pen-on-screen experience that’s made it a staple in creative industries for decades, and for £360 it’s so much cheaper than the iPad Pro that I still have to recommend it to aspiring artists or students who haven’t quite yet found a way to parlay their talents into a steady cashflow. For serious artists working with digital creative tools a pen is just a vastly superior interface to using a mouse or a (shudder) track pad. Over the past year the iPad has made a stronger case for itself as a serious tool for artists and a viable Wacom alternative, but given the state of Photoshop on the iPad, most professionals are still relying on Adobe’s desktop tools. If you hope to be one of them one day, the Wacom One provides is an even more affordable place to start.