The killer app for 3D printers might have nothing to do with quickly churning out complex parts to speed up manufacturing. 3D-printed food is promising to revolutionise the culinary experience, and by making tweaks to a meal’s printed structure, researchers have found ways to make diners feel more full while they eat less.

The research, conducted by the Massachusetts Institute of Technology’s CSAIL HCI (human-computer interface) Engineering group, builds on previous studies about how humans perceive food and how it can alter their feeling of satiety. By changing the shape, size, or presentation of food – like cutting it into larger pieces so it appears to take up more room on a plate – it can make someone eating a smaller portion size feel just as full as they would with a more larger serving. 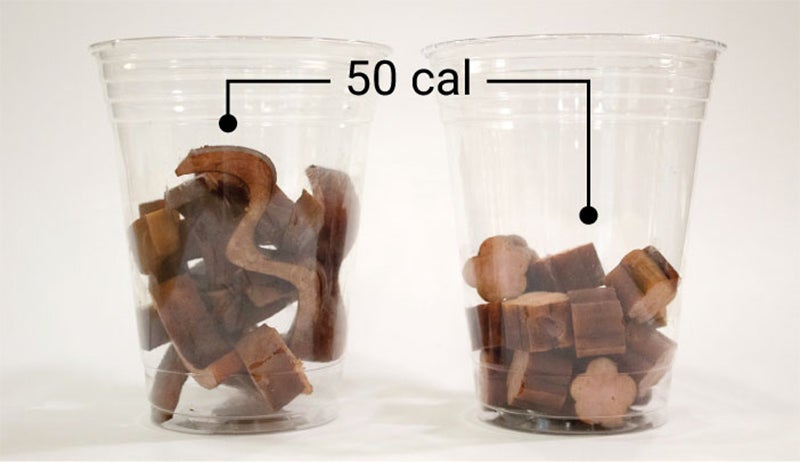 An example of how simple perception can alter someone’s appetite. Both cups contain the same amount of ham, but one looks like it’s holding more food as a result of a laser cutting method that generates complex shapes that don’t stack as efficiently. The perception is that the cup on the left will leave a diner feeling more satiated than the cup on the right. (Photo: MIT CSAIL HCI Engineering Group)

Even the texture of food can have an effect on a diner’s perceived satiety. It’s been found that people tend to eat less food during a meal when it’s harder as a result of how much extra chewing is required to safely consume it. That’s the specific element the CSAIL HCIE group focused on with their research. Using a 3D printer that was upgraded with a nozzle that can extrude raw food instead of melted plastic, they were able to print out oven-ready edible items with internal designs that varied in structure and density.

Two independent ‘taste-test’ experiments were conducted with 30 participants who consumed the various 3D-printed foods while electromyography sensors attached to their faces measured chewing time and intensity. Once the food was completely eaten, the participants completed a self questionnaire that evaluated how satiated they felt afterwards.

The results from the experiments confirmed that altering the infill of a food item, which in turn produces changes in density and the overall size of it after the baking process, can have a definite effect on how a person perceives their level of hunger after eating it. Using those results, the researchers have developed computational models and an end-to-end system they’ve called FoodFab that can automatically customise and create food items based on a user’s preferences or needs.

Those hoping to shed a few pounds can customise the system so that it 3D prints food items that require as much chewing as possible in order to make them feel fuller while only consuming a limited number of calories. The system can work in the other direction too. For someone suffering from an illness or a disability that makes it hard for them to eat, a caregiver could select an option that 3D prints smaller, denser portions that are easier to chew and consume, maximising their caloric intake.

Star Trek promised a future where meal prep was as easy as asking a computer to simply replicate your favourite food, but this research shows that revolutionary food manufacturing techniques like that could do far more than eliminate our need for kitchens and cooking. They could help ensure that every last bite of a meal was customised for the diner’s needs and health.