A Classic Pair of Apple-Branded Trainers Just Sold For Over £8,000

Every few years rumours will pop-up about a supposed smart shoe Apple is working on, and as far-fetched as they might seem, the company did dabble in sportswear in the early ‘90s, including a pair of Apple-branded trainers on which collectors are still happy to spend obscene amounts of money at auction.

Heritage Auctions, the same auction house that recently handled the bidding and eventual sale of an extremely rare Nintendo Play Station prototype, put these trainers, featuring the classic Apple rainbow logo embroidered on the side, on the block as part of a collection of “Urban Art” pieces. The shoes, which were created exclusively for Apple employees in the early ‘90s, were pre-worn and featured some minor wear and tear, but were otherwise in excellent condition and after 20 bids eventually sold for $9,687 (£8,166). 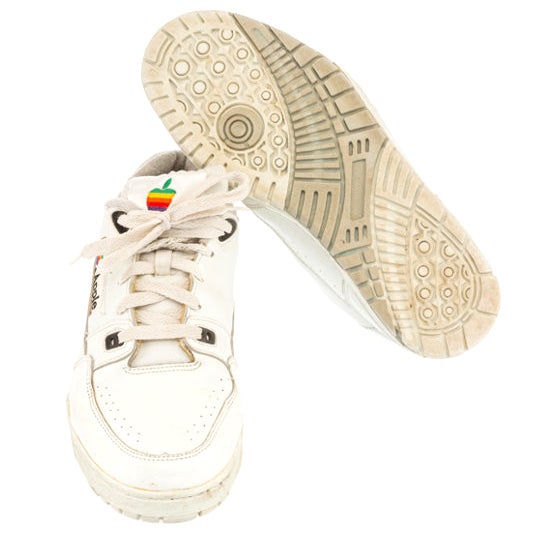 This isn’t the first time a pair of these rare corporate promotional items have gone up for auction. Back in 2017, a pair in immaculate condition, which were claimed to be one of two never-worn prototype pairs created by Adidas, hit the auction block with a starting price of $15,000 (£12,646). They were expected to ignite a bidding war between Apple fanatics and shoe collectors and sell for as much as $36,000 (£30,349), but no bids were actually placed once the auction started, and the Heritage Auctions website still lists the pair as being “Not Sold.”

Why this pair, in far worse condition than those prototypes, managed to fetch almost $10,000 at auction just three years later isn’t known, but collectors probably saw an opportunity to grab an extremely rare piece of Apple swag for a good price as initial bids started much lower than $15,000 this time.