A Powerful New Telescope is About to be Screwed by Elon Musk’s Starlink Constellation, Research Suggests

As astronomers eagerly await the opening of the Vera C. Rubin Observatory in Chile, anxious operators have run tests to see how well the system might work when low Earth orbit is cluttered with satellite megaconstellations, similar to the one being built by SpaceX. Unsurprisingly, the results were not good.

New research from the Rubin Observatory Project Science Team (PST) shows that a megaconstellation consisting of 42,000 satellites will wreak havoc on the Legacy Survey of Space and Time (LSST), which is slated to begin late next year and end in 2032.

Nearly one in three LSST images are expected to contain at least one satellite trail, while practically all images taken at dusk or dawn will be marred by at least one satellite trail, according to the research. If nothing is done to mitigate this pending problem, the team expects it will have to add an additional four years of work to the project.

Named in honour of Vera C. Rubin, a pioneer in dark matter research, the observatory should come online late next year. Astronomers will use the Rubin Observatory’s 8.4-metre (27.5-foot) Simonyi Survey Telescope and the 3,200 megapixel LSST Camera to capture 1,000 images each night, surveying nearby stars and galaxies far, far away. The Rubin Observatory, in addition to helping with astronomy and cosmology, could conceivably detect dangerous asteroids approaching Earth.

“The LSST survey will create a colour motion picture of the universe, making the unusual commonplace and the singular observable,” wrote the authors of the PST report. “For the first time humanity will view the optical universe with a panoramic view in space and time. The greatest advances to come from Rubin Observatory are thus almost surely unanticipated.” To which the authors added: “This requires access to the pristine unpolluted night sky that for millennia has been the birthright of Earth’s inhabitants.”

The telescope will ideally take 30-second-long exposures, revealing faint and distant objects that are 20 million times dimmer than what can be spotted with the naked eye, according to the PST. With this high degree of optical sensitivity, it’s not difficult to imagine how satellites careening overhead will pose monumental problems for the survey.

Obviously, astronomers have dealt with satellites for decades, but the PST planners are anticipating an influx of new satellites over the coming years. SpaceX, as a prime example, has performed five Starlink launches since May 2019, placing 300 satellites in low Earth orbit (LEO). But this is small potatoes, as the Elon Musk-led company is hoping to seed LEO with 42,000 Starlink satellites by the mid 2020s. Rival companies, including Amazon, OneWeb and Samsung, are set to pile on, with experts predicting upwards of 50,000 satellites in LEO by the 2030s. 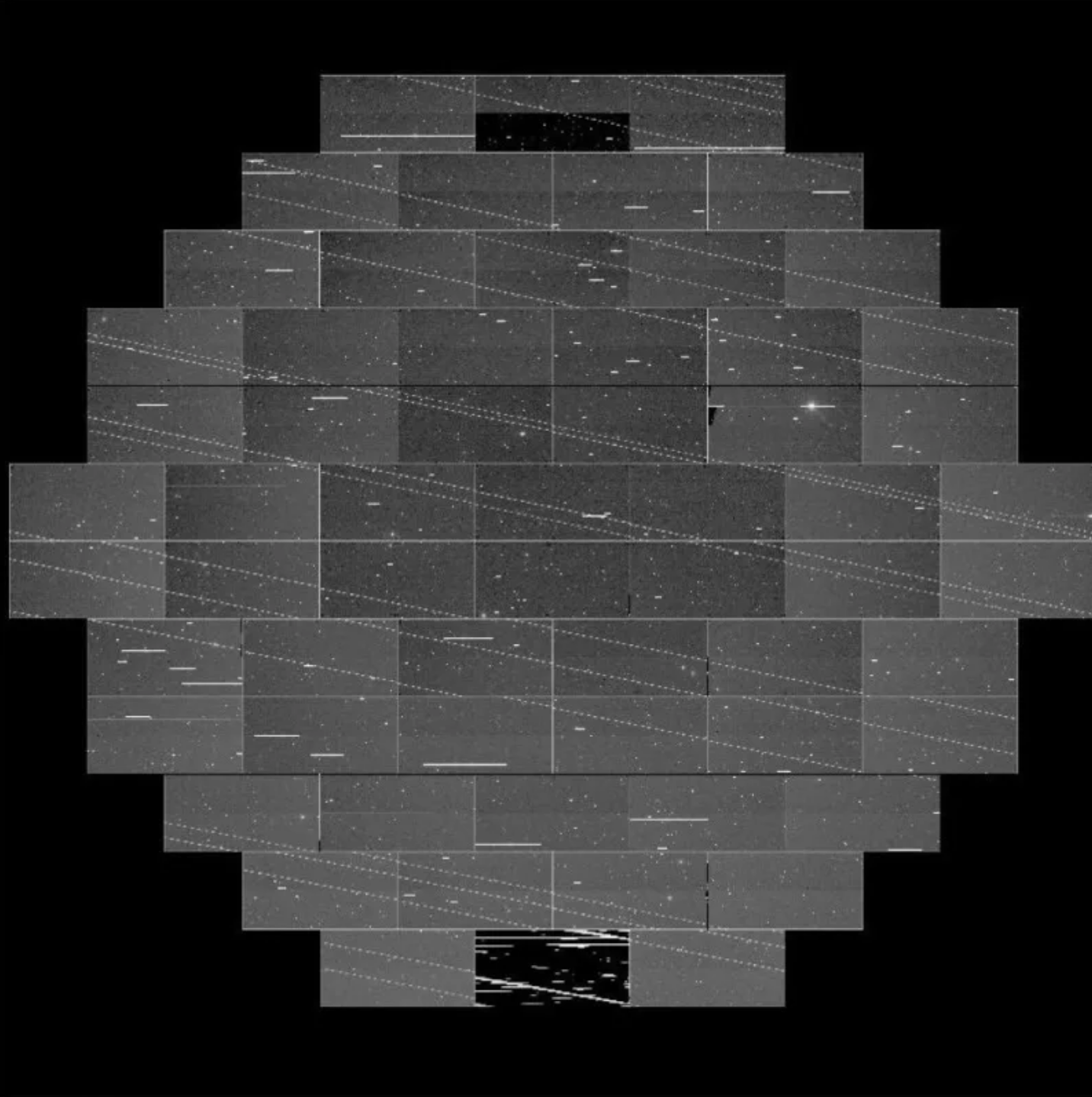 Another problem has to do with the way these satellites are deployed. Starlink satellites are initially plopped into an orbital altitude of 290 kilometres (180 miles), after which time they ascend to an operational orbit around 550 kilometres (340 miles) above the Earth’s surface (which is still actually quite low, as they’re still visible to the unaided eye). During the early stages of this process, however, the satellites produce that now iconic train-in-the-sky effect. At a launch pace of two per month, these Starlink satellite trains are now a semi-regular presence in the night sky.

The brightness of LEO satellites are expected to saturate astronomical images, producing residual visual glitches and forcing scientists to toss the images straight into the virtual rubbish bin. The artifacts are expected to be so bad that an additional four years will have to be tacked on to the 10-year-long survey to make up for the loss, according to the PST’s new study.

Sadly, the megaconstellations could also interfere with related research, such as detecting problematic asteroids and doing cosmological work such as investigations into dark matter.

These sorts of problems and others were discussed recently at an American Astronomical Society conference in Hawaii, as astronomers scramble to prevent future constellations from inhibiting their ability to do science. Naturally, the team at Vera Rubin has brought its concerns to SpaceX, and the two groups are working together to find solutions.

Possible mitigation strategies include reducing the brightness of the satellites by a factor of 10, according to the PST report. This will require new technology (e.g. low-reflectivity paint), added costs, and buy-in from satellite operators. SpaceX has already darkened one of its Starlink satellites to test the concept, which it calls the “sunshade”.

As described in the PST report, other potential solutions include powerful image-processing algorithms to fix problems caused by streaks and software to predict the orbital motions of satellites, which will prevent the telescope from scanning particular patches of sky – which, good luck with that; the Vera Rubin telescope will have a 10-square-degree field of view, which is around 40 times the area occupied by the Moon in the night sky. With 50,000-plus satellites streaking around and the plan to make 30-second-long exposures, it may be tough for the software to find an expanse of sky free from artificial interlopers.

That said, another mitigation strategy proposed by the PST is to make back-to-back 15-second exposures of the same patch of sky. Should one of these two images feature a satellite tail, it would be rejected. Not a great solution, but a solution nonetheless.

Hopefully PST and SpaceX will come to some sort of agreement on how to best move forward. Earlier this week, Musk said Starlink will cause “zero” problems for astronomy, as reported by Forbes, which seems a strange claim to make given that it already has. Musk was speaking at a satellite conference at the time, where he said the company will take “corrective actions if it’s above zero,” according to Forbes.

Well, he better mean it; science before profits, man.