Mercury, the closest planet to the Sun, is one of the last places we think about when considering the potential for life in the solar system. New research suggests the planet’s interior once contained the basic ingredients for life, a finding that could change the way we view this toasty, tortured planet.

Despite having no atmosphere and a surface that reaches 430 degrees Celsius (806 degrees Fahrenheit) during the day, Mercury may have once hosted a habitable underground layer filled with the basic building blocks of life, according to new research published in Scientific Reports.

This extraordinary claim is supported by Mercury’s “chaotic terrain,” a region featuring deep valleys, long cracks, and sharp mountains. First observed by NASA’s Mariner 10 spacecraft in 1974, scientists hypothesised that the chaotic terrain was the result of a gigantic celestial impact on the other side of the planet and the flurry of quakes that followed. The new research, led by Alexis Rodriguez from the Planetary Science Institute, exposes the many cracks in this prevailing theory, while positing an entirely new hypothesis, one which suggests these odd geological features were formed by massive amounts of volatile materials that escaped Mercury’s subsurface long ago.

Volatiles are compounds, such as water, nitrogen, and methane, that easily switch between states of matter, such as liquids flipping over to gases or solids transforming directly into gases or vapours, a chemical process known as sublimation. For astrobiologists, mere mention that volatiles might exist on a celestial object will garner a response resembling a dog who suddenly notices a squirrel nearby. Volatiles are prerequisites for life, so the insinuation that Mercury once held an abundant supply of volatiles, and under potentially dynamic conditions, is raising some intriguing questions about Mercury’s ancient past.

Indeed, it’s hard to believe that Mercury could ever have been habitable and even harder to believe that tiny microorganisms might have squirmed deep below the surface, but the new paper is challenging our notions about which objects in the solar system were once capable of fostering life. At the same time, it’s offering new exploration targets for astrobiologists.

That a celestial impact on the other side of Mercury could have created the chaotic terrain is not an outlandish idea. Pluto’s Sputnik Planitia likely formed from such an event. Long ago, a collision with a large object sent shockwaves through to Pluto’s opposite side, creating the now-iconic heart-shaped feature.

For the new study, Rodriguez and his colleagues referenced data collected by NASA’s MESSENGER spacecraft, which took detailed scans of Mercury’s surface from 2011 to 2015.

Analysis of this data showed that the chaotic terrain formed around 1.8 billion years ago, which is 2 billion years after the aforementioned impact event, the evidence of which is still seen today in the form of the Caloris impact basin. It’s a key finding, as it throws the entire timeline out of whack. Not only that, the scientists say the seismic activity generated by the impact would have disturbed a region much smaller than the chaotic terrain. Moreover, the researchers spotted many other chaotic landscapes across the planet, including in Mercury’s equatorial and polar regions, which suggests this was not a regional geological phenomenon.

Accordingly, Rodriguez and his colleagues say the Caloris impact theory cannot sufficiently explain the chaotic terrain – so they’ve providing a new one.

“Here, we present the first detailed morphologic investigation of these chaotic terrains using MESSENGER datasets,” the authors wrote in the study. “Our results support an origin due to the widespread, yet non-catastrophic, surface [collapse] of a multi-kilometre thick upper crustal volatile-rich layer.” 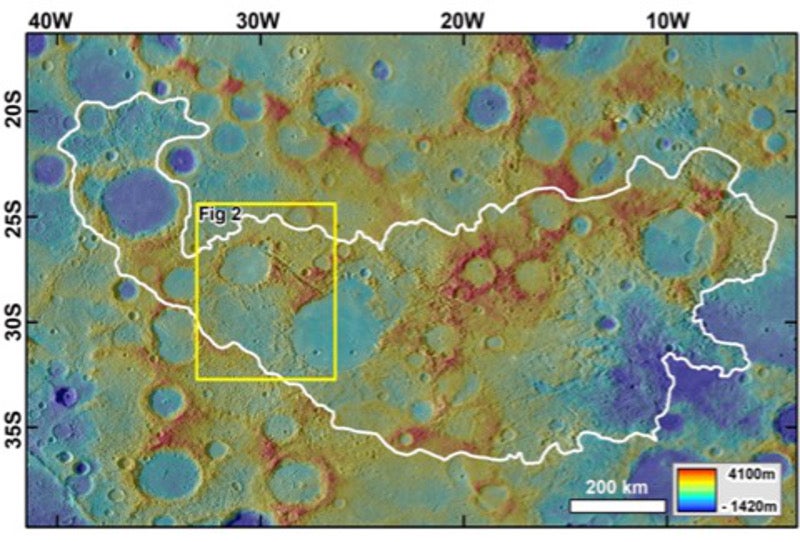 White outline shows the chaotic terrain, while the yellow square shows the smaller area that would’ve been affected by a celestial impact on the other side of Mercury. (Image: PSI)

So, billions of years ago, this region began to collapse in on itself, in a process that took a very long time. This raises the possibility that “enormous volumes of crustal volatiles turned into gas and escaped the planet’s upper crust over a surface area slightly larger than that of California, approximately 500,000 square kilometres [193,000 square miles],” explained Gregory Leonard, a scientist from the University of Arizona and a co-author of the new study, in a press release. As these materials rose to the surface, they caused cracks and other deformations to appear on the landscape.

Magma located deeper down likely provided the heat needed for the process, or perhaps it was stoked by “increases in solar luminosity over time,” according to the research.

As noted, this finding points to an abundant and diverse supply of volatiles on ancient Mercury. Intriguingly, these compounds (including water ices and organics) would have been exposed to changing environmental conditions, including temperature swings, which may have fostered stable habitable conditions, according to the research. Housed inside this comfy niche, simple microbial life could have emerged deep underground, far away from Mercury’s harsh surface.

That said, this possibility requires the presence of water among the other volatile compounds, which remains a glaring unknown.

“While not all volatiles make for habitability, water ice can if temperatures are right,” said PSI scientist and study co-author Jeff Kargel in the press release. “Some of Mercury’s other volatiles may have added to the characteristics of a former [aquatic habitat]. Even if habitable conditions existed only briefly, relics of prebiotic chemistry or rudimentary life still might exist in the chaotic terrains.”

To which study co-author Mark Sykes, also from PSI, said: “If these results are confirmed, this and other similar areas of collapse on Mercury could be important considerations for future landing sites to investigate the origin of the planet’s volatile-rich crust and, perhaps, even its astrobiological potential.”

Which, wow. Suddenly, Mercury – of all places – is a target worth exploring for traces of prior habitability and alien life. That’s a big and unexpected revelation, and a thrilling one at that.