The only thing worse than gagging down reheated chips s stomaching leftover rice you’ve resurrected in the microwave. But there’s now a fresh alternative: This electric Bento Box can make a single serving of rice at a time.

If your family eats rice as part of several meals each day, a large multi-cup rice cooker is still the way to go, and it’s one of the few appliances worthy of a permanent place on your kitchen counters. (Just please make sure to clean it out at least once in a while.) But if most of your dining is done solo, a full-size rice cooker is overkill and most likely a waste of both counter and cupboard space. With a large rice cooker, there’s also the risk of convincing yourself that as long as you’re making rice you might as well make extra for leftovers, which in reality you’ll just throw out in three days.

Thanko’s Bento Box rice cooker isn’t just about perfect portions, as the intrepid testers at SoraNews24 discovered after putting the cooker through its paces. Despite what the internet might try to tell you, rice reheated in the microwave, no matter what trick you use, is never as good as freshly steamed rice. So instead of bringing cooked rice from home for lunch at work, the Bento Box cooker’s compact footprint means you can keep it in your office or at your desk all the time, and then cook up a fresh batch of rice when mid-day rolls around. (It weighs in at just over two pounds, so carrying it back and forth from home to work each day might not be an ideal option.) 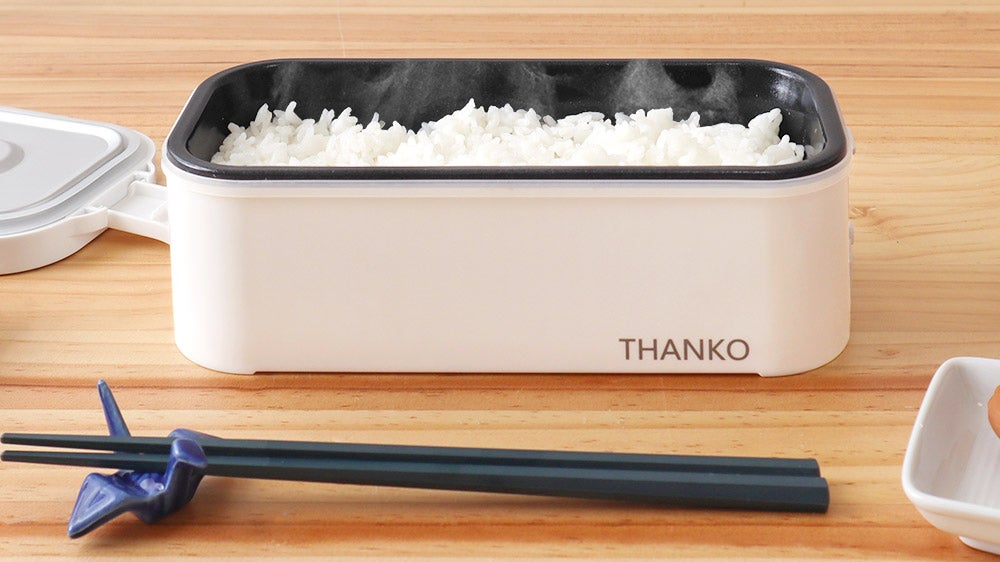 An included measuring cup makes a little over six ounces of rice when using a full scoop, but half scoops are an option too if you’re just looking for an afternoon snack. Once you add water, plug it in, and turn it on, the Bento Box takes about 14 minutes to cook a half portion of rice, and just shy of 20 minutes if you opt for a full scoop. SoraNews24 found it was especially useful in a work setting as the compact cooker didn’t have any annoying audible chimes and didn’t blast out steam while it was cooking. A simple colour-changing LED provides all the necessary status updates about when it’s time to eat.

At about £50, it’s far from the cheapest automatic rice cooker you can buy (you can find them for as cheap as £20 on Amazon), but it’s got one other feature going for it: You can use it as a Bento Box and eat the rice, and other ingredients, straight out of it without having to worry about contaminating someone else’s food. It also means there’s one less bowl or plate you’ll have to clean.