If you’ve ever had to fly during the cold winter months you’ve probably already experienced the hassle of a delayed flight because the aircraft had to be blasted with deicer before take off. But annoying delays are just one of many issues ice build-up on a plane can cause, so researchers have come up with a better alternative that involves blasting planes with lasers instead of chemicals.

Airlines and plane builders currently use multiple strategies to prevent snow and ice from building up on aircraft, which can affect the movements and functions of control surfaces, reduce the accuracy of important sensors, and even diminish a plane’s aerodynamics which reduces fuel efficiency. The most obvious are the fleets of tanker trucks deployed at airports in the winter months that spray aircraft with chemicals such as antifreeze that helps prevent ice and frost from building up. Aside from flight delays, the de-icing process uses upwards of 600 litres of antifreeze to treat a large plane, and not all of it can be collected and recycled afterwards.

To keep an aircraft in flight ice-free, planes are equipped with heating systems in the wings that warm flight surfaces and melt away any frost build-up, but powering those systems requires extra fuel, and fuel is expensive. So researchers from Fraunhofer Institute for Material and Beam Technology IWS, aircraft manufacturer Airbus, and the Dresden University of Technology in Germany have co-developed a better way to keep planes free of ice and snow. It uses a technology called Direct Laser Interference Patterning (DLIP), where a laser is split into multiple beams that overlap each other creating complex etched patterns on a surface where the beams are focused. 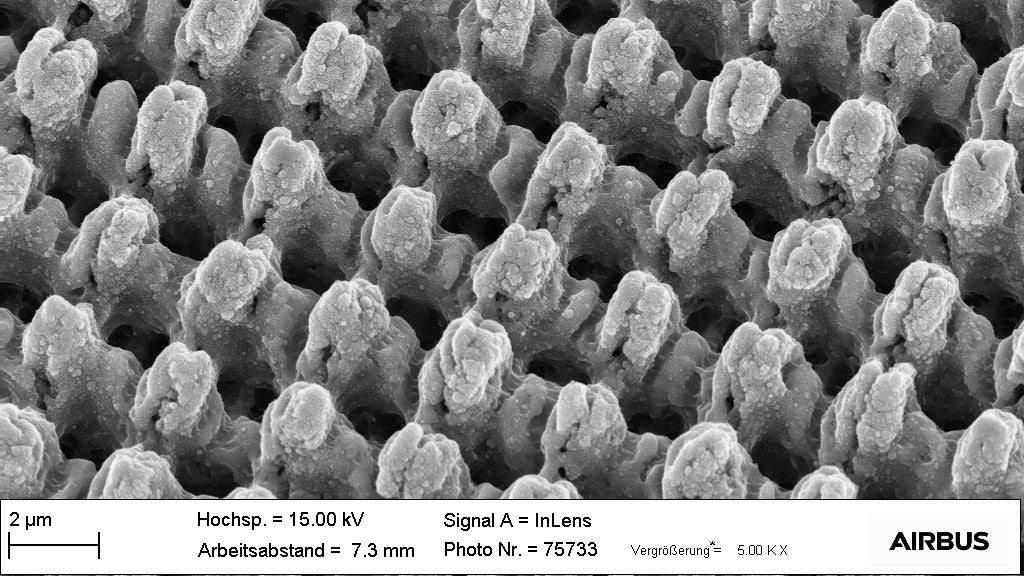 By adapting the DLIP technique to create three-dimensional structures at the microscopic level, the laser etching technique is able to turn an aeroplane’s wing into a material with reduced surface area that ice simply has a hard time holding onto. As a result, after reaching a certain thickness and weight, built up ice simply falls off a wing all on its own. It could not only reduce the need for de-icing procedures at airports, but it could also remove the need for antifreeze and other chemical agents altogether.

Waiting for ice to spontaneously fall off on its own isn’t always an option, like when you’re cruising along at 500+ miles per hour, 30,000 feet in the air. So additional testing by the researchers found that while it took over a minute for ice to melt off a wing surface with 60 watts of heat applied, the same material, treated with the laser etching process, saw ice completely vanish after just five seconds with the same amount of heat. Not only does it mean an aircraft could be cleared of ice much faster without the use of chemicals, but it also means that aircraft manufacturers could include smaller heating systems that were just as effective, but with drastically reduced fuel consumption.

The new use for the DLIP technology isn’t only useful for keeping aircraft safe and free of ice, it could be applied to everything from the blades on giant power-generating windmills, to the hulls of ships braving icy waters. The biggest benefit could be applying it to the windows of a car, making scraping them clean on a cold winter’s morning as easy as wiping away raindrops – assuming, of course, that the etching process still lets you actually see through the glass.