Multitasking and information overload go hand in hand, particularly when you have dozens of windows, tabs, and apps open at once on a desktop. Getting actual work done can be tricky. But Windows, macOS and Chrome OS actually have built-in tools to clear up some of this congestion, and you probably don’t even know they exist.

The names of these tools differ from operating system to operating system, but the purpose is the same: to let you spread out your open windows into several virtual workspaces. You might give each work project a separate space, for example, or split personal and professional apps into separate desktops.

The menu bar, dock, Start menu, desktop shortcuts, and any other on-screen tools you use stay consistent across these virtual spaces, so you can easily jump into whatever new programs you need and get at your files, even as you expand your digital workspace.

In Windows, Microsoft calls these workspaces Multiple Desktops. To access it, click the Task View button on the taskbar just to the right of the search box. Alternatively, hit Windows+Tab on the keyboard; on a touchscreen display, swipe in from the left.

When you see the New desktop button up in the top left, click to create new desktops. Use the resulting thumbnails to switch between the Desktops currently open, or use the Windows+Tab+Left and Windows+Tab+Right keyboard shortcuts to do the same job. After a desktop has served its purpose, click on the small cross icon above it to close it down. 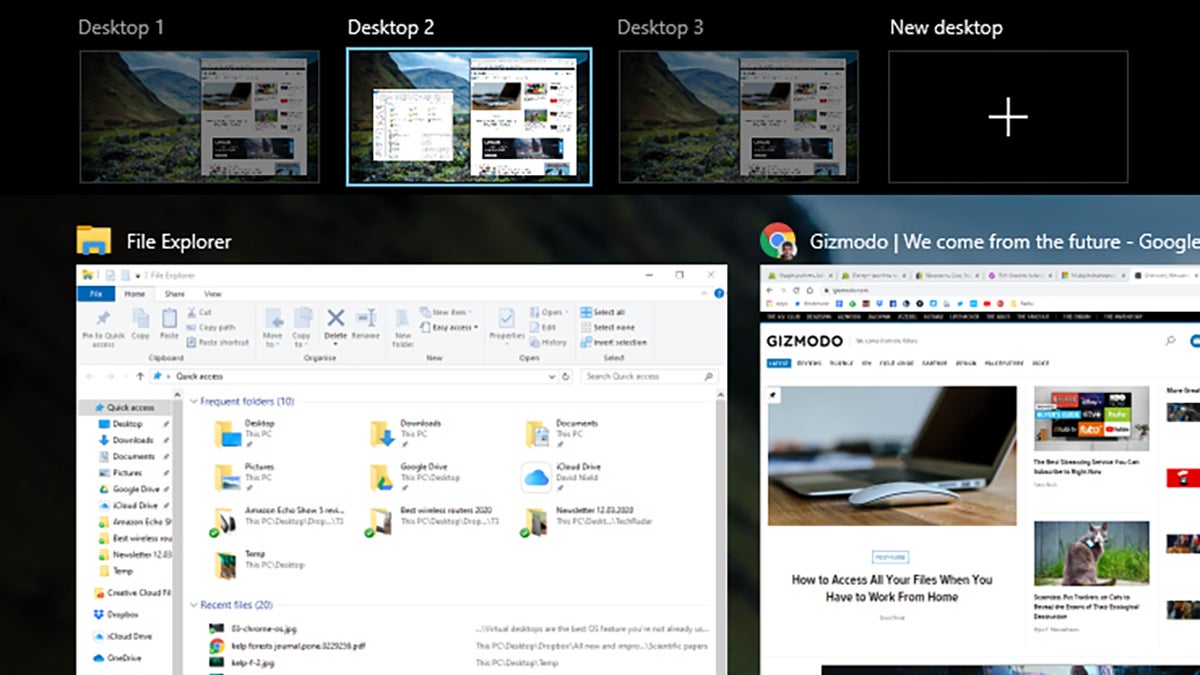 The Start menu and taskbar are available in every virtual desktop, but you’ll only see icons on the taskbar for the programs you have open in that particular workspace. Likewise, when you use the Alt+Tab keyboard shortcut to cycle between open applications, you’ll only see the programs relevant to that specific desktop.

When it comes to macOS, you’re working with what Apple calls Spaces. Launch the Mission Control dashboard, which you can access by hitting Ctrl+Up or by swiping up on a MacBook trackpad with three or four fingers. Move the cursor to the top to see your desktops, and click the Plus icon on the right to create a new one. To remove a Space, just click the small cross next to its thumbnail in Mission Control.

You can move between Spaces by using Ctrl+Left and Ctrl+Right, with a three- or four-finger swipe on the trackpad, or by going into Mission Control and clicking on the relevant thumbnail at the top. Mission Control shows the open windows in the current Space, and you can move any window to a different Space by clicking and dragging it. 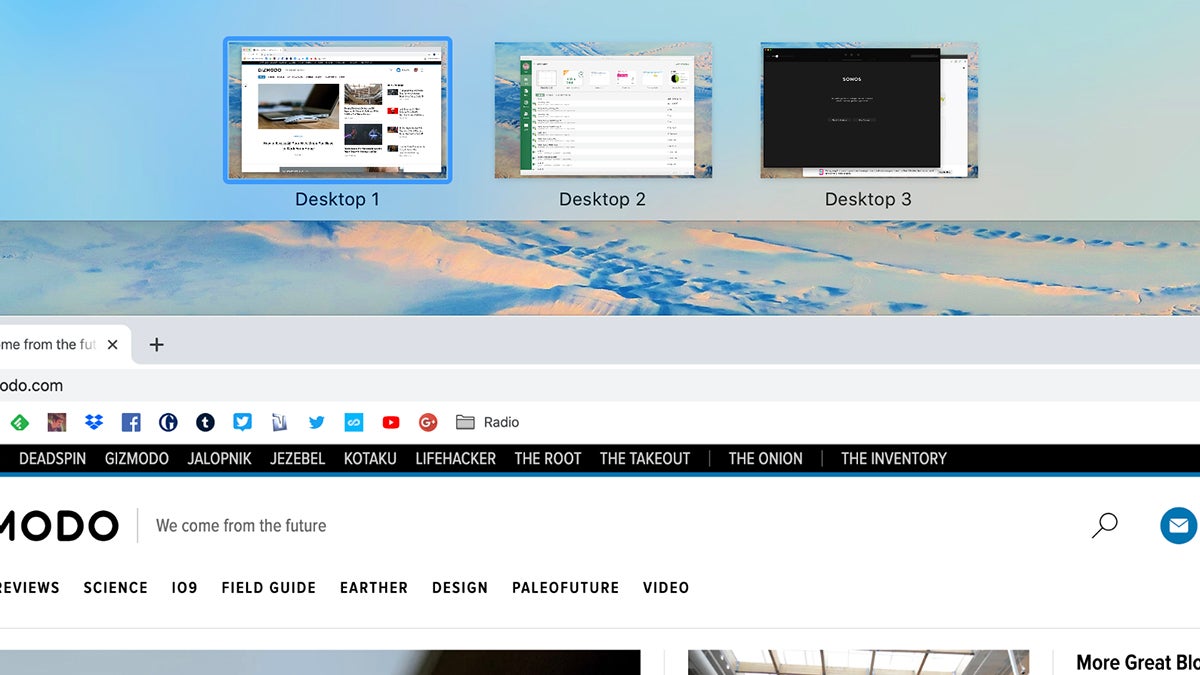 Alternatively, in the standard desktop view, drag a window to the left or right of the screen and hold it there for a second to jump to the adjacent Space and move the window you’ve picked up there. macOS lets you create up to 16 different Spaces, and each one can have its own desktop background if needed (go to Apple, System Preferences, and Desktop & Screen Saver from any Space to do this).

The dock is available in every Space, and if you select an app that’s open in a different Space, macOS jumps to it. The same happens if you cycle through your open program windows with the Cmd+Tab keyboard shortcut. To get an app to always open in a particular Space, click and hold its entry in the dock, then choose Options.

Over on Chrome OS, separate workspaces are known as Virtual Desks. To find them, all you need to do is hit the Show windows key on the keyboard – it’s a rectangle with a couple of lines by it, and should be above the 5 key on a Chromebook. Click New desk to create a new one, click on a thumbnail to jump to that desk, or click the small cross next to any thumbnail to delete that desk.

To move an open window to a different desk, drag it from the overview screen that appears when you press the Show windows button. You’ll see all the open windows and apps on the current desk when you launch that overview screen. You can also move a window to a different desk while it’s open by hitting Shift+Search+Left or Shift+Search+Right on the keyboard. 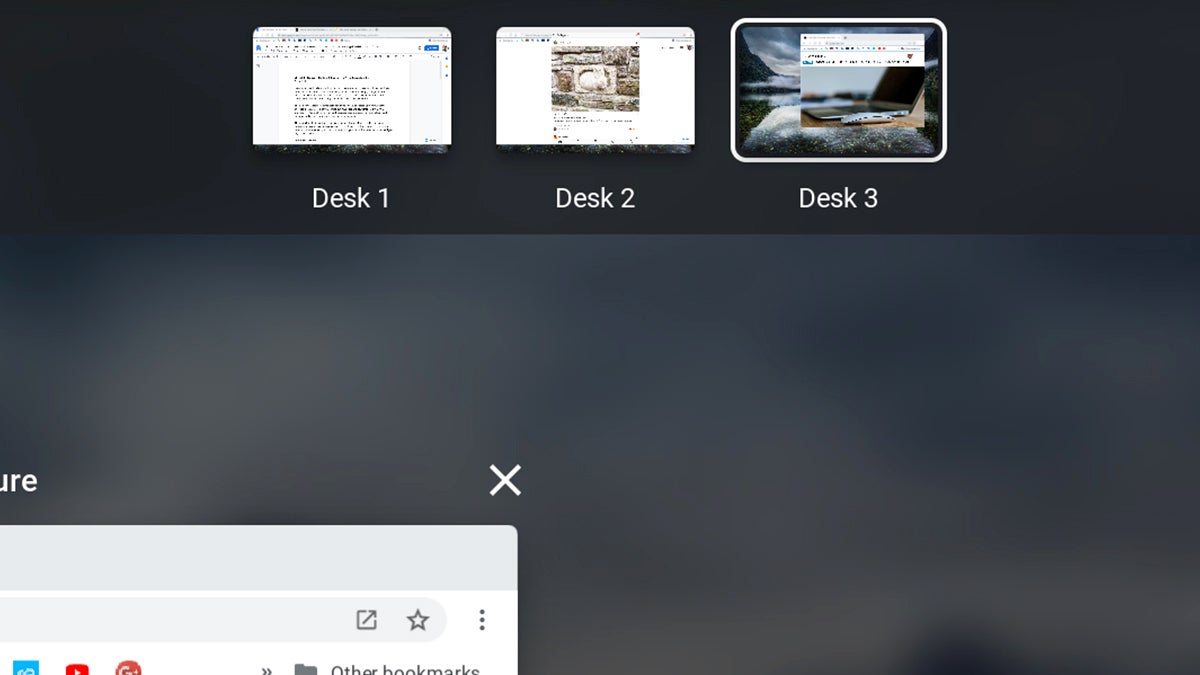 It’s worth learning a few more keyboard shortcuts to get around your Virtual Desks more easily: Hold Shift+Search and tap the Equals (“=”) key to create a new desk, or hold down the Search key and tap the Left or the Right arrow key to quickly jump between desks. You can also use Alt+Tab to cycle between all your open windows on all your desks.

The app shelf and the Launcher button are available on all of your desks: Opening a new app will position it on the current desk, but if you select an icon for an app that’s already open, Chrome OS jumps to the relevant desk instead. Where you have multiple app windows open (as with Chrome), click and hold on the shelf icon to choose between them.