Archaeologists in China have unearthed a tomb belonging to a 9th-century noblewoman who was buried alongside her donkeys, which she likely rode while playing an ancient version of polo.

New research published this week in Antiquity describes the tomb of Cui Shi, an Imperial Chinese noblewoman who died in 878 CE. Her tomb was found eight years ago in Xi’an, China and appears to have been badly looted. Thankfully, some pieces of little value were left in the tomb, including a stone epitaph that identified the tomb as belonging to Cui Shi, the wife of an esteemed governor.

Much to the surprise of the archaeologists, this elite member of society was buried alongside three donkeys, which the researchers say is the first physical evidence of donkey polo dating back to this time period. Tang Dynasty (618 CE to 907 CE) texts describe the use of donkeys for this ancient sport, but archaeological evidence had been lacking until now. The new paper was led by Songmei Hu from the Shaanxi Academy of Archaeology in Xi’an, China. 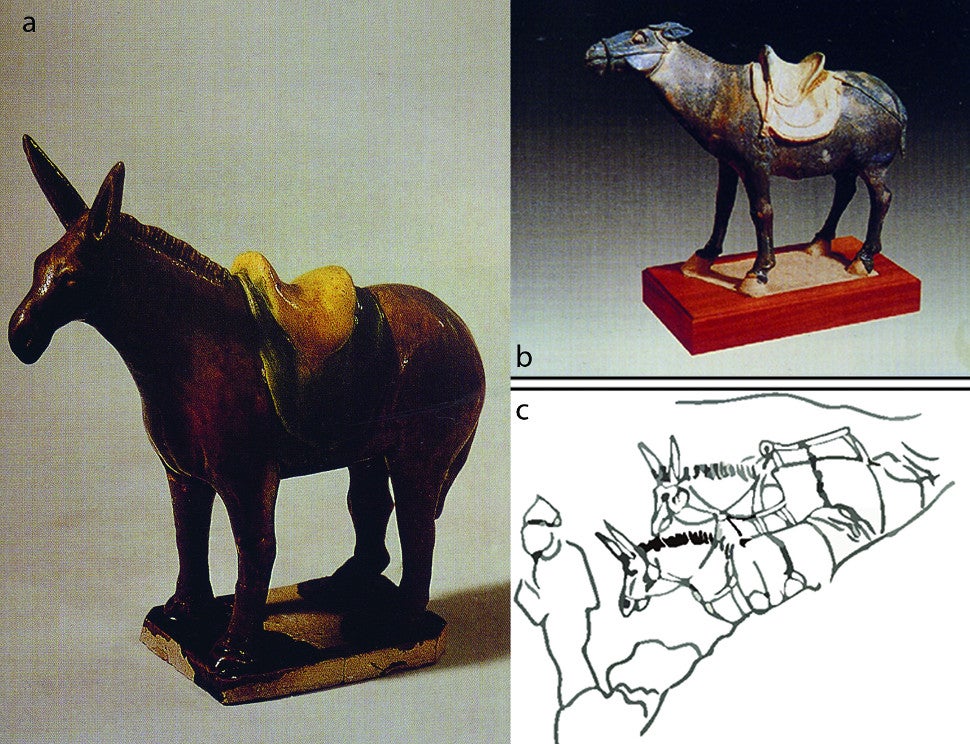 Donkeys were a critical resource in ancient times, enabling trade and the transportation of goods (both for commerce and the military), in addition to their use on farms. As for their use in entertainment and leisure activities, not so much is known. The new research is important in that it highlights a rare and unusual role played by donkeys in Imperial China, while also providing a glimpse into the life of high status Imperial Chinese women.

What’s more, the use of these animals as grave goods points to a potential spiritual role for donkeys as well. The donkeys were buried alongside Cui Shi “so that they could accompany [her] spirit into the afterlife,” according to the new research. To the Imperial Chinese, donkeys were far more than just beasts of burden.

Polo is traditionally played on horseback, and the pastime can be traced back to ancient Persia (now Iran) and the Parthian Empire (circa 247 BCE to 224 CE), according to the researchers. The sport eventually spread to central China and the Tibetan Plateau by the 7th century.

Xi’an was the capital city and a major cultural and economic centre of the Tang Dynasty. Donkeys played an important role as pack animals, but citizens sometimes used these animals for the sport of donkey polo, known as Lvju in Imperial China.

“Considered a prestigious sport, and originally important for training cavalry, polo was played on horseback by the military and the Tang court in Xi’an, and was esteemed by many Tang emperors,” wrote the authors. “The game, however, was dangerous and occasionally fatal, as the death of Emperor Muzong attests (reigned 821–824). Donkey polo, which used smaller, steadier donkeys rather than horses, became an alternative favourite participation sport for elite women and older individuals, as well as for the less affluent.” 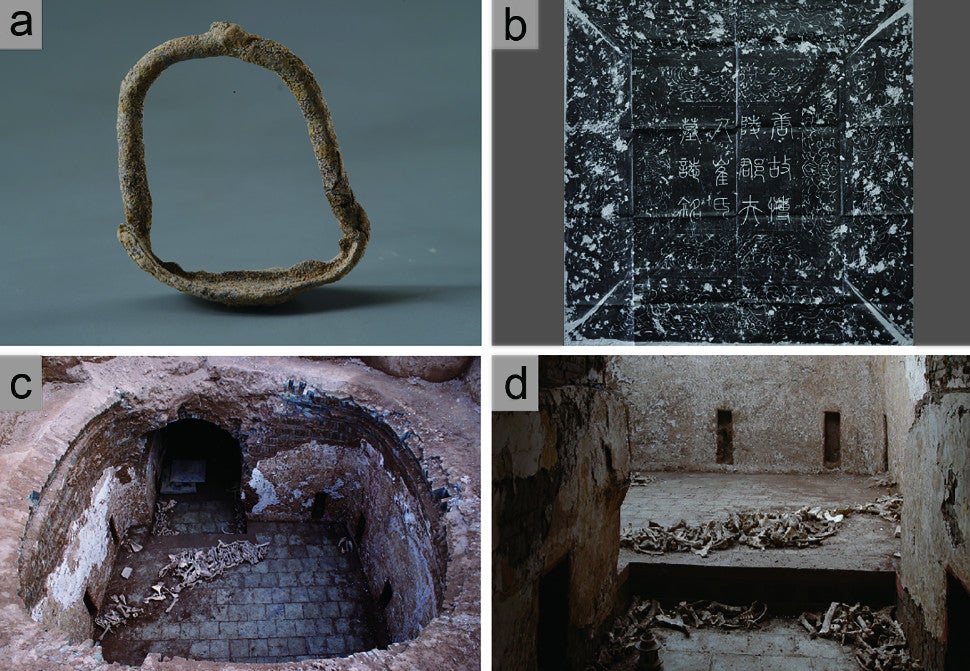 The tomb of Cui Shi was made from brick and featured an entrance, a corridor, and a single burial chamber. In addition to the stone epitaph, the archaeologists found a lead stirrup and walls decorated with figures depicting servants and musicians. The remains of four cattle were also found in the tomb, in addition to the three donkey skeletons.

Written texts from the period describe Cui Shi, who died at age 59, and her husband, Bao Gao, a governor of two districts and an avid horse polo player. Bao Gao was once promoted by the emperor to participate in an important match and even lost an eye to the game, showing just how dangerous the sport really was and why some people chose to play the game on donkeys instead of horses, the authors wrote in the paper.

Analysis showed that all three donkeys were over the age of six when they died, so they would’ve been at a suitable age for the sport. What’s more, they were a bit undersized compared to those used for hauling. Radiocarbon dating placed the animals to the same time period as Cui Shi. The donkeys were “therefore buried at the same time as the occupant of the tomb, although we cannot be certain that the donkeys were used by Cui Shi herself,” wrote the authors in the study, adding that it’s unlikely that the donkeys were added to the tomb at a later date. 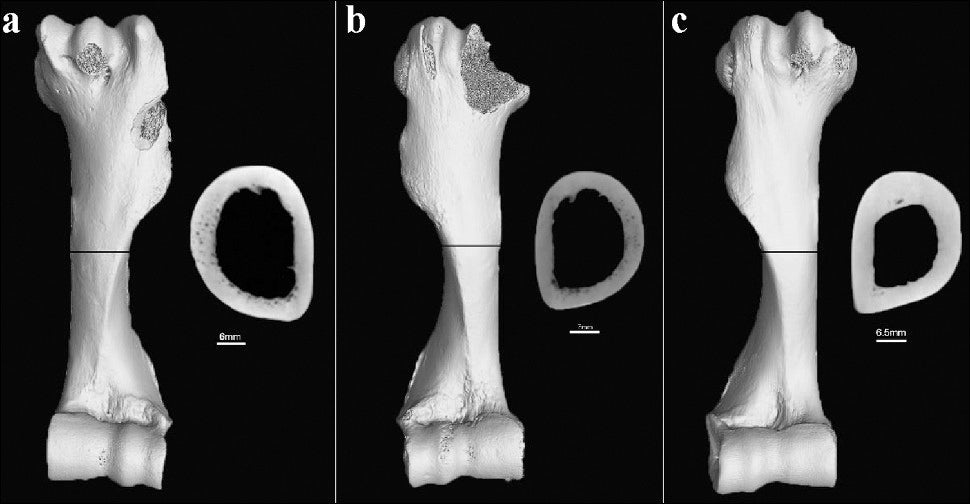 The scientists also measured the amount of biomechanical stress exerted onto the donkey bones over the course of their lifetimes, namely the humerus shaft. The authors hypothesised that “if these donkeys were used for polo, shaft geometry would more closely resemble that of wild asses, with locomotion that would be characterised by acceleration, deceleration and turns, rather than the steadier, slower gait of pack donkeys.”

Results showed a pattern consistent with tight turns, including the kinds seen in polo. What’s more, the patterns were inconsistent with those seen in either wild or domestic donkeys, including those used to carry heavy loads. That said, the researchers really had nothing to compare their samples to, as donkeys are no longer used for polo, so they caution that this part of their analysis isn’t fully conclusive.

Still, given the complete body of evidence, the authors conclude that donkeys were used by Cui Shi for sport, not transportation, and that the animals were included in her tomb to ensure that she could continue to play polo in the afterlife.

It’s always a good thing when physical archaeological evidence is found to corroborate written texts. That said, more evidence could further bolster some of the claims made in the paper, such as the donkeys being used for polo and that Cui Shi herself was a donkey polo player.