Dyson's New Flat Iron Is Impressive, But It's Not Magic

Let me tell you: Straightening hair is a pain in the arse. For those born without pin-straight tresses, taming frizz, waves, and curls is an Entire Process that involves a mystical combination of heat, expensive hair-styling products, and praying that the weather cooperates with you because, as we all know, water and humidity are The Enemies of straight hair. After I tested out the Dyson Corrale, a £400 cordless flat iron that promises 50 per cent less heat damage, my DMs were flooded with friends asking if this thing is worth it. After playing around with it for a few days, my very unsatisfying answer is: It depends.

The tech behind the Corrale lies in its flexing plates. Unlike the rigid plates in your typical flat iron, the flexing plates supposedly gather your hair in a way that promotes uniform heat and tension. Basically, the device requires fewer passes over your strands to get the same result, which means less than half of the heat damage. Dyson claims the Corrale also addresses one of the most significant criticisms lobbed at its Airwrap curling iron – it works for all hair types, including Type 4b and 4c. (If you’re unfamiliar with hair types, you can read more about it here.)

What is it?: A cordless flat iron with flexing plate

Like: Saves lots of time. Can double as a curling iron. Works on all hair types (though results may vary). Heats up quickly.

Don't Like: Expensive AF. Depending on your hair, you may still end up having to do multiple passes.

As you might have gathered from various photos and videos of me that have appeared on Gizmodo, I don’t have particularly curly hair. After giving me a once-over, a Dyson ambassador told me I was likely Type 2a or 1c, though my regular stylist says I’m a 2B. Whatever I am, I have naturally thick, wavy hair that frizzes like mad in the summer, but it’s not difficult to curl or straighten. That might not be the case for people with Type 3 or 4 hair. So to test how effective the Dyson Corrale really is, a few women with diverse hair types from our office volunteered to give the Corrale a whirl.

A note: We didn’t get the chance to test the Corrale ourselves on Type 4 hair. I did, however, see a demo of it in person at a private briefing with Dyson. The Corrale worked pretty well both on Type 4 hair that was prepped and not prepped with products. That said, I watched a professional stylist do it. So yes, it does work, but how well it works on Type 4 hair in the wild will depend on individual skill.

In our testing, there were a number of areas where the Corrale definitely impressed. For starters, it saved a decent chunk of time when it came to straightening. Jezebel writer Shannon Melero-Ureña, noted it usually takes her about an hour or two to straighten her hair but managed to do it in about 35 minutes. Likewise, video producer Pilar Enseñat managed to straighten her entire head of luscious curls in about 40-45 minutes. I managed to get my entire head done in about 10-15 minutes, when in the past I’ve spent around 60-90 minutes. 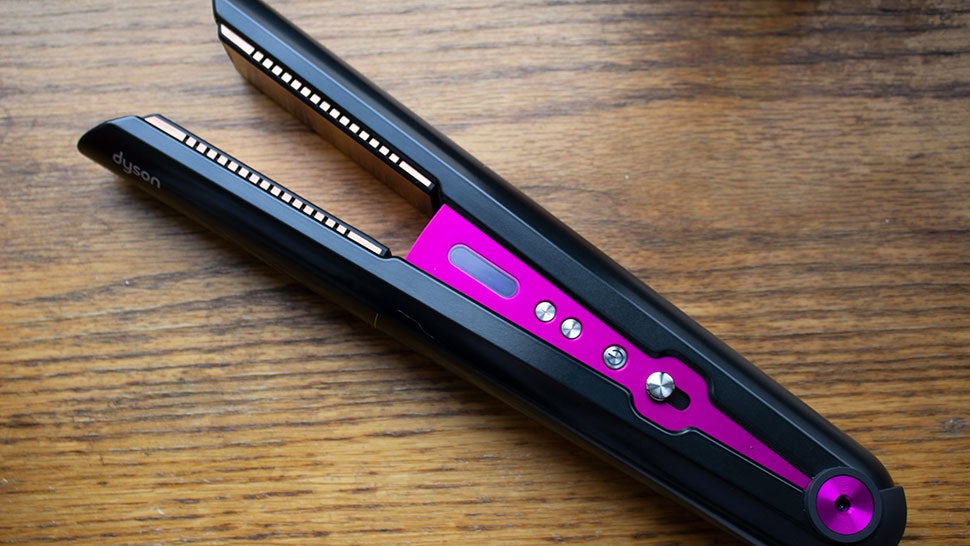 I have to admit, it’s a nice looking flat iron. (Photo: Victoria Song/Gizmodo)

One nice thing about the Corrale’s design is that the device itself never gets super hot, and the tip stays cool, which means you can get super close to your scalp to smooth your roots easily without burning your scalp. On the flip side, it was hard to get the ends completely straight. That’s not necessarily a bad thing! You end up with a more natural look. It just might be a little disappointing if you’re trying to get your hair as pin-straight as Jennifer Aniston’s in the early aughts.

The Corrale heats up quickly – it takes just seconds to go from completely cold to the highest temperature setting. The device lets you know when it’s ready to use with a cute little ding. It also turns off automatically once you stop using it, emitting a series of beeps as it does.

The cordless factor made styling way easier, because you don’t have to manoeuvre a cord while working on the back of your head. That, plus the fact that the device won’t burn you if it comes in contact with your skin, meant we didn’t scorch ourselves as often. (You can still burn yourself if you get too close to the plates – and we did.) One of the main reasons I mostly quit heat styling my hair at all a few years ago was I was constantly burning myself, so for me, this was a huge plus. 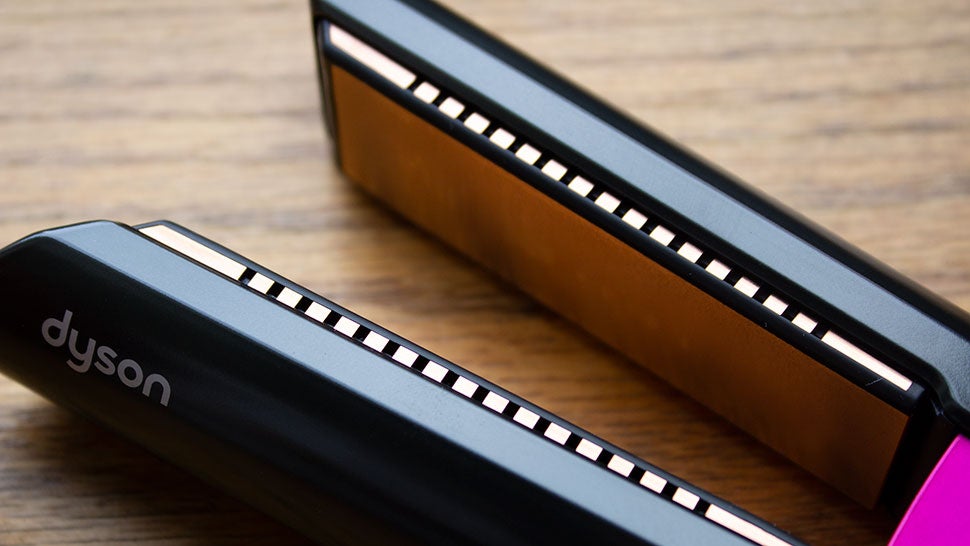 The proprietary flexing plates are made of copper manganese and are 65 microns thick. (Photo: Victoria Song/Gizmodo)

But the Corrale is not perfect.

It’s heavier than typical flat irons – something that Dyson claims is a plus, because it lets “gravity do the work” – but creative producer Joyzel Acevedo found the weight was tiring after about 30 minutes. She also has thick hair, and while Dyson promised fewer passes, Joyzel didn’t find that to be the case for her. She ended up needing multiple passes to get her hair looking the way she liked, and ended up quitting halfway through – though the half she did straighten looked pretty great. I checked in with her the day after, and she said her hand was sore from handling the Dyson. I didn’t have that issue, but my hair isn’t as curly or thick as Joyzel’s, meaning I never had to use it for more than 30 minutes at a time.

There is also a learning curve when it comes to using the Corrale. For instance, the flexing plates make the flat iron feel different than others do when you clamp down. The device is springier, and you also don’t have to apply as much pressure. If you’re used to squeezing your iron really hard, you might be surprised at how your hair turns out with the Dyson. That was definitely the case with our testing, and after some playing around, we found that applying less pressure achieved better results. 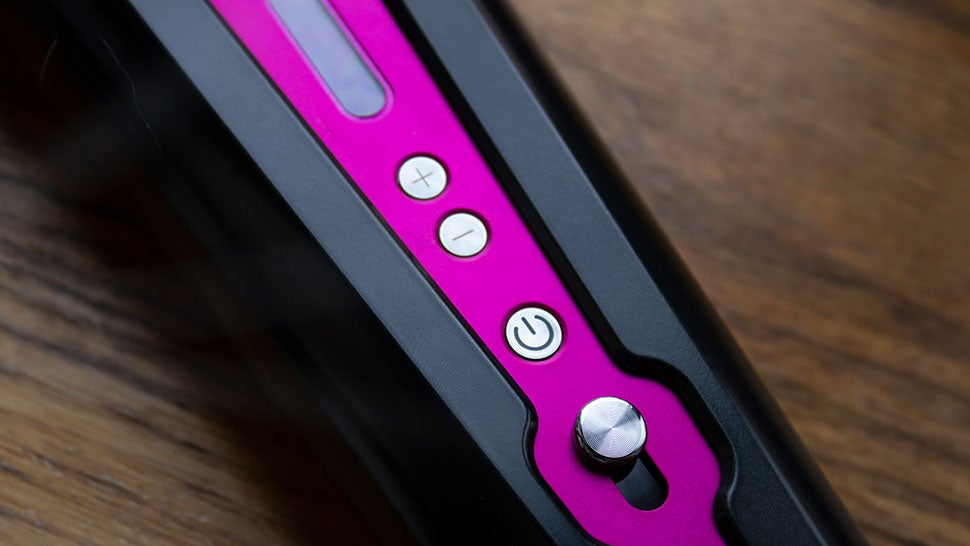 The buttons are simple: plus to raise the temperature, and minus to lower it. There’s also a power button, and a locking mechanism to keep the iron closed. (Photo: Victoria Song/Gizmodo)

Dyson’s temperature settings also take some getting used to compared to other flat irons. The Corrale has three presets – 165°C, 185°C and 210°C. Dyson says you need lower temperatures than other flat irons offer to achieve the same result, so you might have to play around a bit to find out which setting gives you the experience you’re used to. Joyzel, Shannon, and Pilar mostly used the 210-degree setting, while 185 degrees was plenty of heat for my hair.

These little differences also impact battery life. The Corrale has four lithium-ion batteries that give you an estimated 30 minutes of styling. Again, this will depend on your temperature settings, your styling technique, and whether or not you have enough counter space for the charging dock to rest the device in while you section or brush out your hair. I got a decent chunk of time on a single charge, because my hair is receptive to heat styling even if I’m a skill-less dingbat. However, Shannon got low battery warnings after a half hour and had to plug in. Joyzel’s Corrale straight-up died on her during the same time. This isn’t necessarily a deal-breaker, but it does require an adjustment. (The Corrale comes with a little flap with an aeroplane on it, so you can disable the batteries before boarding a flight.) 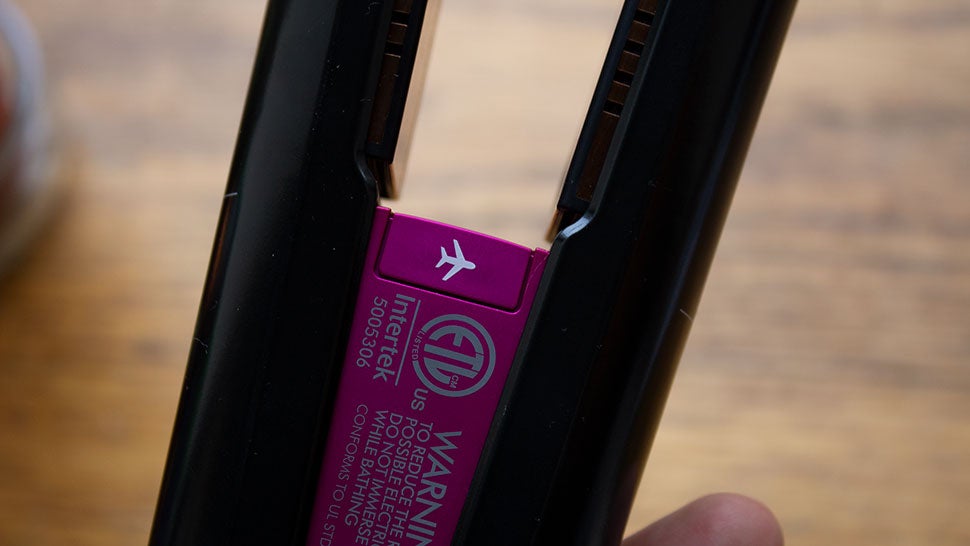 If you’re flying, you can pull out this pin to deactivate the lithium-ion batteries. (Photo: Victoria Song/Gizmodo)

If you set personal preferences and styling skills aside, the Corrale performs as you would expect a well-engineered gadget would. The results look pretty good even if you’re not particularly skilled at styling. Shannon told me that her Corrale-straightened hair managed to survive a sweaty workout at the gym. Joyzel said her curl didn’t bounce back immediately after a wash. That’s impressive when you consider that even the tiniest bit of water can wreck a straight perm.

But is the Corrale worth £400? Like all Dyson products, the absurd price is maddening, because the product delivers on a lot of levels. The Corrale works well enough that you’d be tempted, but it’s also expensive enough to make your eyes roll to the back of your head. For me, the straightened look the Corrale gave me was all I ever wanted in my student days. I would have killed for this device back then. I’m crying inside at how much money and hair damage I could have saved myself after years of subjecting my strands to Japanese straight perms. But at this point in my life, I’d use the Corrale to tame my frizz in the summer – £400 is a lot to ask for an inessential gadget, even if it saves me a bunch of time. If this flat iron were somewhere in the £200 range, I’d be much, much, much more tempted.

Besides, embracing your natural look is now trendy. I’ve grown to appreciate my waves even as they occasionally frustrate the hell out of me. Plenty of folks with curls and natural hair feel similarly. If I’m only using a heat-styling tool for special occasions, a £400 hair gadget isn’t really worth the cost. You should also consider that while the Corrale works on all hair types, in our testing, it still works better on some than others. It’s not a magic wand that will let someone with Type 3 or 4 hair straighten their entire head in 15 minutes at a very low temperature. It’s good, but it’s not that good.

But if you’re someone who styles their hair every day, that £500 might suddenly start looking like a good investment. Heat also wrecks colour, so if your dye jobs last longer between hair appointments, the maths might work out in your favour. You might also be able to justify the price, because the Corrale also works as a curling iron, so instead of buying a curling iron and a flat iron, you get two in one. But you’ll need to also invest time into learning the Corrale’s particular techniques. Dyson has some video tutorials up on its website, but I had a stylist teach me in person twice how to make beachy waves and lord knows I still can’t do it. I managed to figure out how to do a traditional curl with the Corrale after much instruction, but I don’t do that often enough to make it worth the price.

How often you style your hair, your hair type, and how good you are at styling – or if you’re willing to invest the time and effort to becoming good – are all important factors that you should consider before splurging on the Corrale. Unless you invest in your hair like it’s your one true power, you can probably make do with the occasional budget blowout.