Ferocious Raptor Discovered in New Mexico Was a Speedy Hunter

As the Jurassic Park films made abundantly clear, raptors were not to be trifled with, owing to their medium build, speed and agility. A newly discovered raptor from New Mexico is further reinforcing our perceptions of these extinct predators.

Give a warm welcome to Dineobellator notohesperus, an entirely new species of dromaeosaurid, a group of dinosaurs commonly referred to as raptors. Palaeontologist Steven Jasinski from the State Museum of Pennsylvania and colleagues found the fossil in the Ojo Alamo Formation in New Mexico’s San Juan Basin, in a Late Cretaceous sedimentary layer dating back to between 70 million and 68 million years ago. Their analysis of the newly described species was published this week in Scientific Reports.

The name Dineobellator, pronounced “Di-NAY-oh-bell-ah-torr,” is derived from Diné, the Navajo word for the Navajo people, and bellator, which means warrior in Latin. And indeed, this thing was very much a warrior.

Stretched from tip to tail, this dinosaur measured around 2 meters (6 to 7 feet) in length and stood around 1 meter (3 feet) tall at the hip. The authors say it’s a mid-sized raptor, but what this predator lacked in size was made up for in speed, agility and strength. On its own, Dineobellator was capable of taking down small prey, but when hunting in a pack – a distinct possibly – these dinosaurs could have taken down creatures of considerable size. 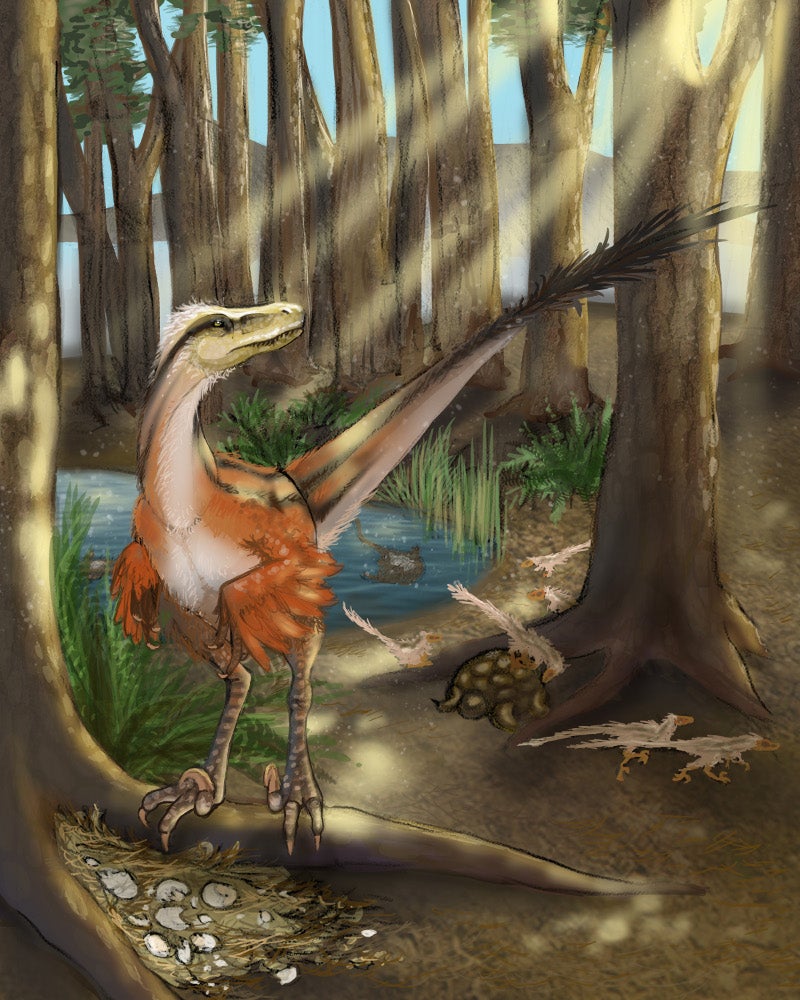 Dromaeosaurids were small- to medium-sized theropods that lived during the Cretaceous. Like other theropods, they stood on two feet and had feathers, hollow bones and feet equipped with three nasty claws. The newly described dinosaur has been added to the Velociraptorinae subfamily, which also includes velociraptors. The discovery of Dineobellator is important, as dromaeosaurids are relatively rare in the fossil record.

In total, the scientists identified 20 different elements in the Dineobellator fossil, including parts of its forelimbs, hands, feet and tail. Analysis of these fossilised bones helped the researchers distinguish it from similar dromaeosaurids, including Velociraptor.

Some features that distinguish Dineobellator from Velociraptor include parts of its upper arm bone, hand and foot claws, and vertebrae near the base of the tail, while characteristics shared with Velociraptor and other velociraptor-like dromaeosaurids include features seen in the braincase, teeth, tail vertebrae, upper leg bone and feet bones, explained Jasinski in an email to Gizmodo.

Dineobellator had strong arms and a forceful grasp, as evidenced by the presumed way its muscles were attached to its bones. It also had a long, stiff tail that served as a kind of rudder, keeping the creature balanced while it ran.

Together, these features, though subtle, suggest Dineobellator likely behaved differently compared to other dromaeosaurids.

“This would have been most easily recognised when it was hunting and pursuing prey. The tail of Dineobellator suggests it could have been an excellent pursuit predator, using its tail as a counter-balance and being incredibly agile,” Jasinski told Gizmodo. “Think of videos of a cheetah pursuing a gazelle: its tail is straight, but it whips around as the cheetah must quickly change direction to pursue an escaping gazelle. Dineobellator could have potentially swung its tail around to be highly agile in pursuit, while other dromaeosaurids seem to have tails that would have been held straight with the body.”

Related species were also fast when running in straight lines, but probably not as good as Dineobellator when changing directions. While hunting, Dineobellator, which weighed around 18 to 22 kilograms (40 to 50 pounds), likely chased down prey, jumped onto their backs, and killed them, said Jasinski.

In terms of prey, Dineobellator was a pure carnivore, feasting on relatively small animals. That said, palaeontologists have prior evidence to suggest raptors hunted in packs like modern wolves. So together, Dineobellators could’ve taken down “prey several times larger than themselves as individuals”, explained Jasinski. 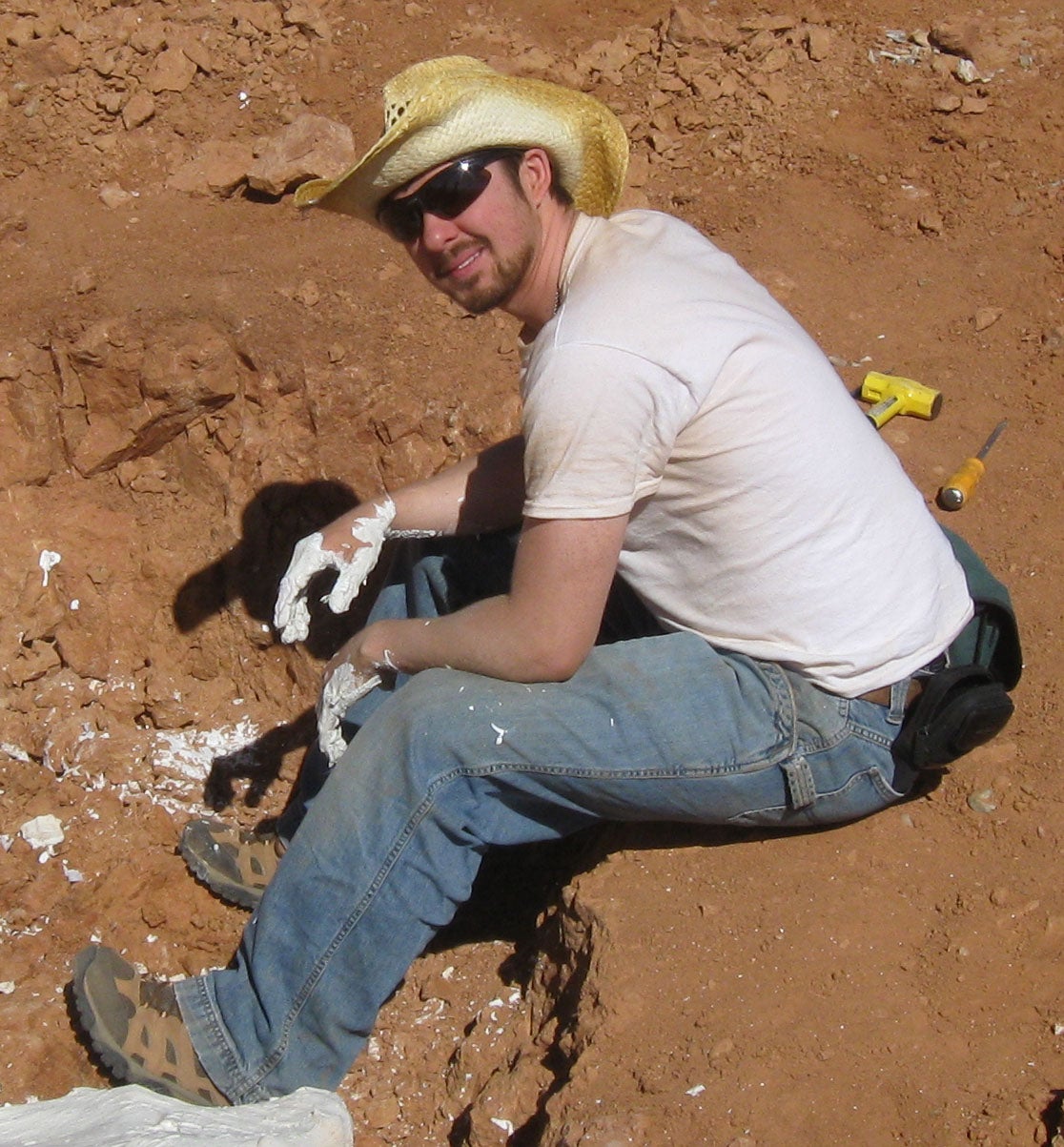 Dineobellator lived in what is now northwestern New Mexico. Back then, this area consisted of a warm floodplain with decent amounts of open areas and nearby forests. Other dinosaurs in the same area at this time included the giant four-legged Alamosaurus, oviraptors, tyrannosaurs, hadrosaurs and troodons. More familiar animals included turtles, crocodiles, and small birds and mammals.

Fascinatingly, the Dineobellator fossil showed signs of injury. Given that this raptor lived alongside T. rex, we can only imagine the kinds of trouble it got into on a regular basis.

“A broken and healed rib suggests an injury that the animal lived with for quite some time, allowing the bone to heal. This would suggest a rough life,” said Jasinski. “A gouge and puncture mark on the claw suggests a fight between two Dineobellator. Chances are this was a fight between two Dineobellator for resources or, more likely, between males fighting to mate with a female. This all suggests an active lifestyle for a fast, agile predator.”

As noted, Dineobellator was added to the Velociraptorinae subfamily, a group that includes the Velociraptor genus, of which there are several known species. The authors say the new fossil is further evidence that dromaeosaurids were continuing to adapt and evolve in Late Cretaceous North America, only a few million years before the mass extinction that wiped out all non-avian dinosaurs.

“Dromaeosaurids were still experimenting with new features allowing them to become better hunters, at least in certain hunting styles like pursuit hunts,” explained Jasinski. “This is further evidence that dromaeosaurids lived together with tyrannosaurids and were key parts of ecosystems at the end of the Cretaceous.”