For Almost £32,000, You Can Buy a Wide-Angle Lens That Can Actually See Behind Itself

A talented photographer can snap stunning photos with even a cheap camera; expensive equipment doesn’t guarantee a beautiful shot. But that doesn’t make buying and experimenting with pricey gear, like a $39,000 (£31,661) fisheye lens with a field of view so wide it can see behind itself, any less tempting.

The lens, known officially as the C-4 Precision Optics 4.9mm f/3.5 Hyper Fisheye, boasts a field of view that covers 270 degrees, which is even larger than the 180 degrees that most wide-angle lenses cover. C-4 Optics was created by Lensrentals founder Roger Cicala, along with Brian Caldwell and Aaron Closz, as a way to experiment with camera equipment and push the boundaries of lens optics to its extremes. This wild fisheye is the perfect example. 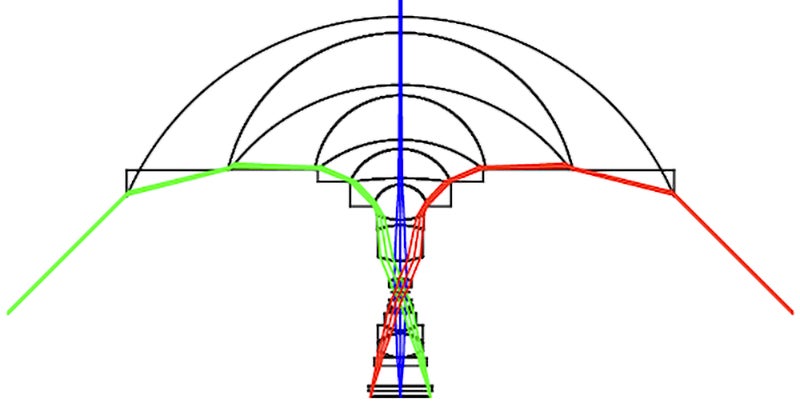 This schematic of the lens shows how light from behind it is bounced and eventually directed into an attached camera’s sensor. (Illustration: C-4 Optics)

Designed specifically for Sony full-frame E-mount cameras, given its size and weight (a hefty 11 pounds), the fisheye lens doesn’t just hang off the front of the camera. Instead, the camera is mounted inside the lens’s own custom-built frame, which includes its own mounts so the entire rig can be mounted to a sturdy tripod or other apparatus that can properly support its weight. The large exterior element alone costs $5,000 (£4,059), so the last thing you want to do is drop it, or even risk putting a tiny scratch on it.

If you’re a shutterbug who’s paranoid about missing something important when your camera is pointed elsewhere, this lens might appeal to you. Every photo you snap captures even more than your own eyes can see. But it’s doubtful your paranoia will help you justify spending $39,000 on a single piece of camera gear. Now that it’s available for sale on LensAuthority (with a 2-month lead time, because each one is custom built) and available for rent on Lensrentals for $1,246 (£1,012) per week, it might actually be useful for those developing virtual reality content or making 360-degree interactive experiences. But if you’re just shooting cute photos of your dog to share on Instagram, you can probably save your money and skip this seriously experimental and expensive lens.