New research could finally explain how highly social deep-sea squid, with their glowing bodies and bioluminescent flashes, are able to coordinate their actions despite living in near-total blackness.

Humboldt squid (Dosidicus gigas) are top predators of the low-light pelagic zone, hunting fish and other marine animals at depths of over 450 metres (1,500 feet). Also known as jumbo squid (not to be confused with giant squid), these human-sized creatures are highly social animals that like to hang out in groups called shoals. Humboldt squid, despite living and foraging in low-light environments, move in a highly coordinated manner, finding ways to avoid collisions and awkward attempts to snatch the same meal.

Humboldt squid have skin equipped with bioluminescent organs, which they use to illuminate themselves in bursts of red and white. Marine biologists have speculated that these bioluminescent displays are used for intra-group signalling, but the extent or degree to which these animals can convey complex messages is not well understood.

New research published this week in Proceedings of the National Academy of Sciences presents evidence for a previously unknown semantic-like ability in Humboldt squid. What’s more, these squid can enhance the visibility of their skin patterns by using their bodies as a kind of backlight, which may allow them to convey messages of surprising complexity, according to the new paper. Together, this could explain how Humboldt squid – and possibly other closely related squid – are able to facilitate group behaviours in light-restricted environments, such as evading predators, finding places to forage, signalling that it’s time to feed, and deciding who gets priority at the dinner table, among other things. 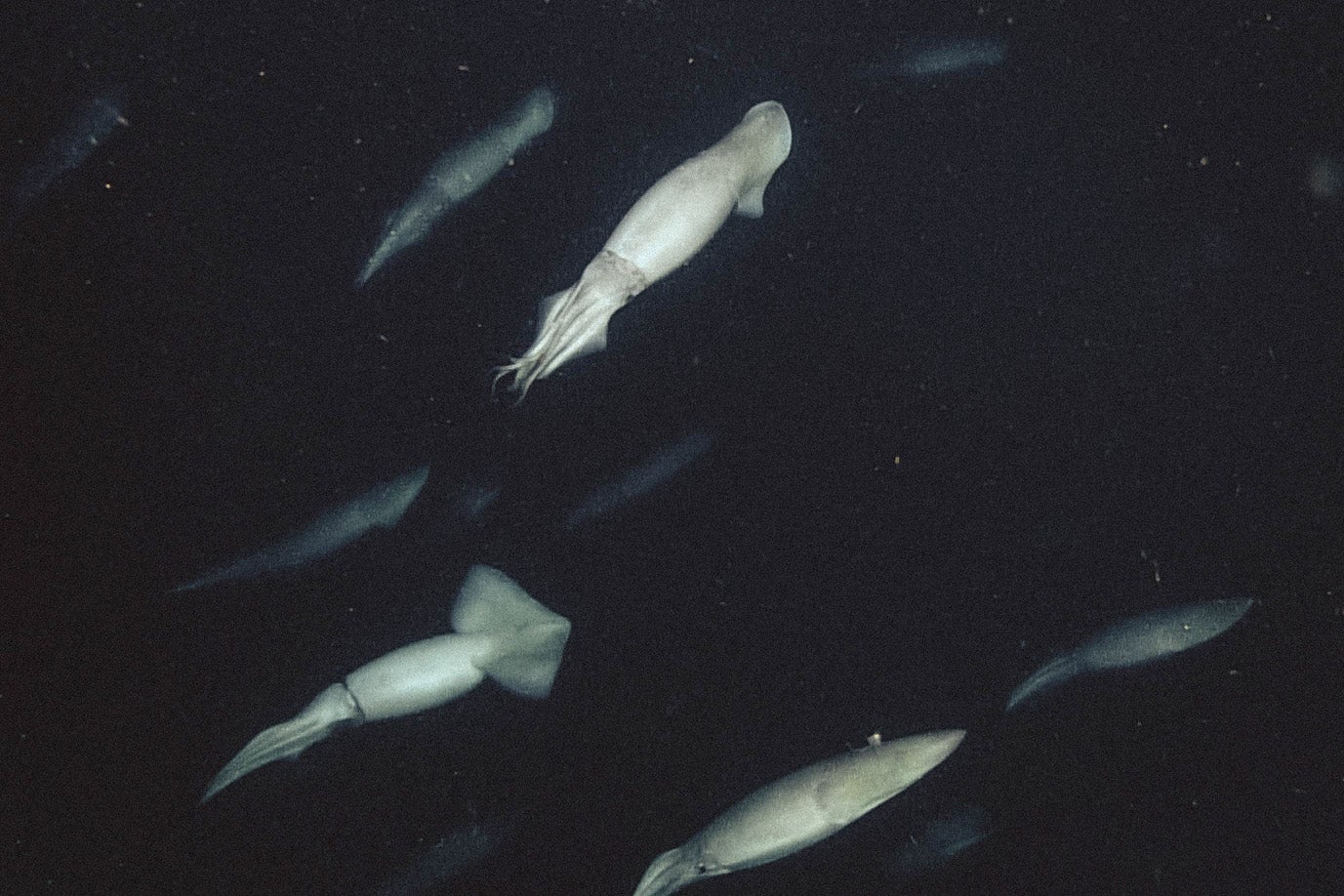 A shoal of Humboldt squid swim in formation about 200 metres (660 feet) below the surface of Monterey Bay. (Image: MBARI)

The authors of the new study, PhD student Benjamin Burford from the Hopkins Marine Station at Stanford University and Bruce Robison from the Monterey Bay Aquarium Research Institute in California, haven’t deciphered this alleged language, nor were they able to document evidence of squid using this proposed backlight effect to communicate in the wild. Rather, the new findings “reveal a capability for information sharing comparable to advanced forms of animal communication known from well-lit habitats,” the authors wrote in the paper, with “capability” being the key word. The researchers showed that Humboldt squid have the required physical means and the required level of behavioural complexity to carry out a semantic-like signalling.

“Prior to this research, we knew that many creatures in the deep ocean used light-producing organs to recognise one another or to attract mates,” wrote Burford in an email to Gizmodo. “In these cases, very simple information (like species and sex) could be communicated, but not much more. Beginning in the early-late 2000s, ROV [remotely operated vehicle] research was beginning to show that some deep-living squids, like their shallow-water counterparts, displayed relatively large repertoires of pigmentation patterns that they make using special cells in their skin.”

In many shallow-living cephalopods, these patterns are known to convey complex meanings in social scenarios and also while feeding, explained Burford. The question he and Robison wanted to answer was whether this held true for deep-diving squid.

“If they used their pigmentation patterns in a similar manner, then this would expand the possibilities for how much information can be visually shared in the deep ocean,” said Burford.

For the study, the duo observed 30 free-ranging Humboldt squid in their natural habitat using high-definition cameras strapped to an ROV. The squid were filmed in the California Current of the eastern Pacific Ocean at depths of 266 to 848 metres (875 to 2,750 feet). The researchers paid attention to any behaviour that could be influenced by the presence, and therefore the signalling, of others, such as differences in how the squid acted when in the immediate vicinity of another squid and how their behaviours changed when they fed and as the number of squid around them varied.

The scientists identified well over a dozen behaviours that could potentially be linked to bioluminescent visual cues.

“We found evidence to suggest that Humboldt squid are potentially able to relay relatively complex information – potentially messages of warning, intent, and social dominance,” Burford told Gizmodo. “Of their repertoire of pigmentation patterns, we found some are used in social scenarios, others are used when feeding.”

For example, the researchers “observed that no matter how frenzied group foraging activity became, squid avoided direct contact and physical competition for individual prey with one another,” they wrote in the paper. This could indicate that squid both “perceived and responded” to visual displays of their peers, who were informing the others of their foraging plans, such as targeting a specific fish, according to the research.

The ROV footage revealed a possible link between skin patterns and specific contexts and possibly even the presence of “semanticity,” in the words of the researchers. That is, the ability to convey meaning through the use of symbols, which in this case would be the expression of pigmentation patterns on their skin. The complexity of the pigmentation patterns seen during foraging, along with the specific ways in which they positioned their bodies, hinted at a basic level of syntax and linguistic acuity, according to the research.

“While each of their patterns may relay distinct information on its own, they seem to be able to combine these patterns together and in sequence perhaps to signal different information,” Burford told Gizmodo. “This would be similar to how we use words in a sentence.”

Complex communication makes sense for a species that migrates and feeds in the deep sea while swimming in vast swarms. A key advantage of this lifestyle are the benefits wrought by collective intelligence, but some drawbacks exist as well, as Burford explained.

“Group-mates can have selfish intentions,” he said. “Humboldt squid are opportunistic predators and highly cannibalistic. Dense feeding groups resemble feeding frenzies, but if you watch them closely, they don’t bump into each other or fight, and they are rarely in competition for the same prey item. These sort of interactions would be costly, so our thought is that visual signalling brings relative order to these groups.”

Burford compared this to driving amongst aggressive drivers in heavy traffic: It’s prudent for us to use turn signals, brake lights, and honking to signal our intentions and to avoid catastrophe.

As further evidence that Humboldt squid are capable of conveying complex messages, the squid can use their softly glowing bodies as a backlight to enhance the visibility of the shifting pigmentation patterns on their skin. Squid can see reasonably well in low light, but their vision lacks clarity. This backlighting effect is produced by hundreds of bioluminescent photophores located under their skin, while the skin pigmentation patterns are produced by chromatophores layered on top. These anatomical features were documented by Burford and Robison after studying specimens in the lab.

“So while shallow-living cephalopods rely on ambient light to make their patterns visible, like words on the page of a book, Humboldt squid most likely backlight them, like words on an e-reader screen, when they are in habitats that are dark,” said Burford. “We therefore think that Humboldt squid and their allies are probably able to visually communicate more complex information in the deep, dark ocean than was previously thought possible,” he said.

All this said, more work is still needed to fully show that Humboldt squid are communicating to the degree hinted at in the new study.

For one, the authors believe it’s still “too early to conclude whether the squid communications constitute a human-like language,” according to a Stanford News press release. It’s also possible that the photophores have nothing to do with visual signaling. If that’s the case, however, scientists will have to explain how the squid are able to see the pigmentation patterns in such low-light conditions. Future research should tackle both of these outstanding questions.

Looking ahead, the team would like to use new camera technology to capture evidence of their backlighting hypothesis in action. More conceptually, they’d like to create a kind of virtual squid – a kind of hologram in the ocean – that’s capable of changing skin patterns like the real thing. When placed among Humboldt squid, this could allow the researchers to hone in on the exact signals used by the cephalopods.

So this story isn't over yet, as there’s a lot of exciting science still to be done.