With covid-19 now spreading widely in the US, it’s no surprise that normal operations at NASA are being disrupted as well. Two NASA workers have already tested positive for the new coronavirus, and officials at the space agency are having to prioritise only the most essential missions. Here’s what we’re learning about how NASA plans to move forward with its projects during this unprecedented health crisis.

So far, NASA hasn’t announced any major cancellations or delays, unlike the European Space Agency, which last week announced the postponement of its ExoMars mission to 2022, citing the novel coronavirus as a contributing factor.

On 8 March 2020, a worker at NASA’s Ames Research Center in the US state of California tested positive for covid-19. Shortly after, a second worker from NASA’s Marshall Space Flight Center in Alabama was likewise confirmed as having contracted the novel coronavirus. In both instances, NASA responded by elevating each facility to a Stage 3 rating along its Response Framework, which mandates telework for non-mission-essential personnel, the shutting down of daycare centres, and restricting travel to mission-essential workers, among other provisions. 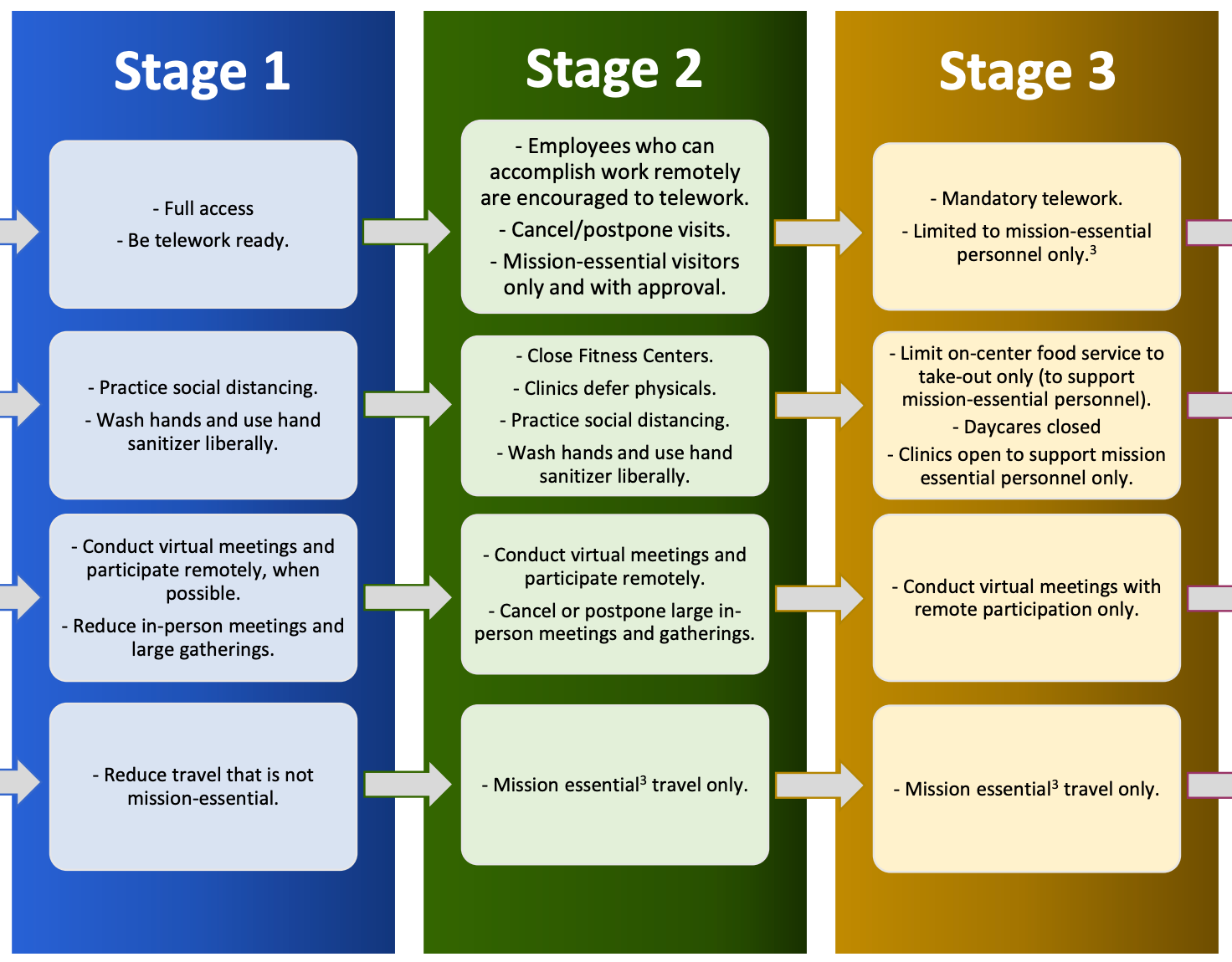 In response to the covid-19 pandemic, NASA has also implemented a Stage 2 rating across the board, which encourages employees to work remotely, practice social distancing, and minimise non-essential work-related travel, among other things. As of today, no other cases of the disease have been reported at any other NASA centre, according to NASA spokesperson Allard Beutel, who corresponded with Gizmodo via email yesterday.

NASA Response Framework Stage 4, which has not been implemented anywhere as of this time. (Image: NASA)

NASA is not yet at Stage 4 for any of its facilities, which is the highest rating along its Response Framework. Should a Stage 4 rating be required – something that remains a distinct possibility, given the severity of the outbreaks in Italy and Spain – NASA would have to close facilities down entirely, limiting access to mission-essential workers responsible for the protection of life and critical infrastructure.

In terms of NASA projects that might be imminently affected by the pandemic, there are a several that come to mind, namely the summer launch of the Mars 2020 Perseverance rover, the April Demo-2 mission (to test a SpaceX Crew Dragon with two NASA astronauts on board), and the already-delayed construction of the James Webb space telescope. But there are lots of other projects to consider as well.

Due to the “coronavirus situation in the United States and its potential impact on travel during the next few weeks, three NASA Earth Science airborne science campaigns slated to deploy across the country this spring have rescheduled their field activity until later in the year,” said Beutel.

These campaigns include DeltaX (an airborne and field survey of the Mississippi River Delta), Dynamics and Chemistry of the Summer Stratosphere, or DCOTTS (a project that uses aircraft to study the chemistry and composition of the upper atmosphere), and Sub-Mesoscale Ocean Dynamics Experiment, or S-MODE (a project that studies the effects of the oceans on climate).

“The scientific returns of these projects are not expected to be impacted by this change of plans,” said Beutel. “Overall, the coronavirus has not significantly affected NASA’s operations, and work continues on track.”

Preparations for the upcoming launches of the Mars Perseverance rover and NASA’s Commercial Crew flight test (SpaceX’s Demo-2 mission) to the International Space Station, along with construction of the James Webb telescope (targeted for launch next year), are proceeding as planned, he said.

In related news, the Visitor Complex at the Kennedy Space Center in Florida has been shut down until further notice.

Another future mission to consider is the launch of a Russian Soyuz MS-16 rocket on 9 April 2020, which is supposed to deliver NASA astronaut Chris Cassidy and Russian cosmonauts Nikolai Tikhonov and Andrei Babkin to the ISS. Normally, NASA quarantines its astronauts for 14 days prior to a mission, but this quarantine period could start earlier than usual, given the circumstances.

“We expect [Russian officials] to take additional measures to make sure that quarantine is a little tighter,” Kirk Shireman, ISS program manager at NASA, told SpaceNews.“We’re ready to deal with that if it happens,” he said.

At the same time, NASA is talking to the White House, the US State Department, and other federal agencies, Beutel told Gizmodo. The space agency has also created an internal, multi-office working group to address ongoing issues pertaining to the outbreak. And finally, NASA will adhere to guidelines provided by the US Centers for Disease Control and Prevention (CDC) and also the NASA chief health and medical officer, he said.

So nothing too dramatic – at least not yet. With the extreme fluidity of the situation, this could all change in the blink of an eye. We’ll be watching closely, fearing the worst but hoping for the best.