Hot Toys' Life-Sized Baby Yoda Is Here, and He Is Glorious

We had Sideshow’s stunning statue, the Funko Pop, and Hasbro’s own animatronic attempt. Then we got a Mandalorian figure that came with a little asset of his own. But we wanted a proper Baby Yoda action figure of our own to cherish – and Hot Toys is stepping up in a big way.

The toymaker has finally unveiled its own life-sized, fully articulated take on Baby Yoda, and it’s basically the ultimate take on The Mandalorian’s breakout star. Coming in at just over 14" tall, Baby Yoda is fully articulated, unlike Sideshow’s previously-announced statue, and comes with a host of alternate accessories to display him however you so choose. That is, when you’re not cradling him as you protect him from the Imperial Remnant, credit-hungry bounty hunters, or, you know, just to smother him with all your love and affection.

Aside from usual Hot Toys figure additions like bonus hands – one set of relaxed pieces, one set depicting him using the Force, and a third set to hold his included accessories – Baby Yoda comes with swappable ears, too. One set’s relaxed, for all the usual Baby Yoda goodness, but then there’s a set of downwards-pointing ears for when you want him to look particularly precious.

It’s too much. My heart is bursting before my wallet even has the opportunity to.

As well as his adorable self and those bonus features, Baby Yoda will come with a stand and two accessories: the Mythosaur skull necklace the li'l tyke is gifted by Din in the first season’s climax, and the Razorcrest lever knob Baby Yoda couldn’t resist playing with whenever he was in the ship’s cockpit. Sadly, no hover-pram or bone broth sippy cup, but perhaps we’re getting ahead of ourselves when it comes to a lifesize rendition of a baby space magic alien.

You’ll have to wait to get your hands on Baby Yoda though – Hot Toys is estimating a release for either late 2020 or early 2021, so you might have him by the time The Mandalorian’s second season is wrapping up. We also don’t know how much he’s going to cost yet, but...come on. It’s going to be a lot. Maybe more than a camtono of beskar, even. 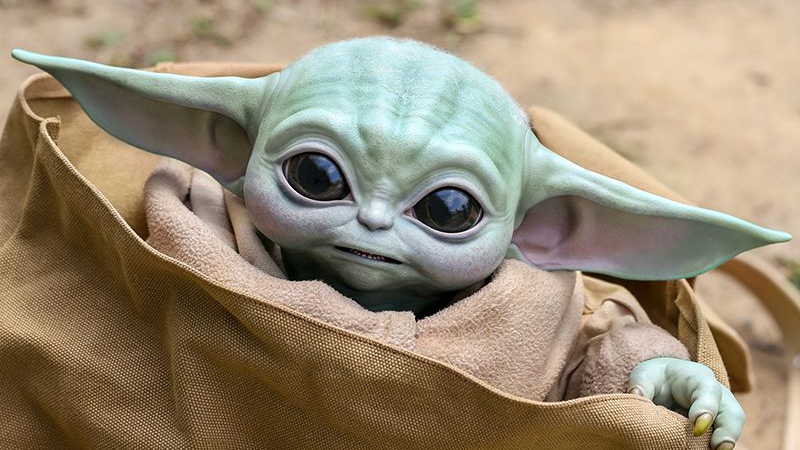 It’ll be worth it though. Whose wallet can say no to those eyes?