If You Want Earbuds With a Cord, the Powerbeats 4 Are the Ones

Sometimes it feels like we went from using wired earbuds plugged into a smartphone headphone jack to wearing completely wire-free Bluetooth ‘buds overnight. But between the two eras were corded Bluetooth earbuds, which some still prefer because it’s tougher to lose an earbud when it’s strung to its partner. For those folks, Apple’s Beats brand just launched new Powerbeats.

The £130 fourth-gen model sports a slightly refined version of the classic Powerbeats design – around-the-ear hooks connected by a smooth, rounded cable – and slightly longer battery life. If the old Powerbeats were your jam, the new ones are a solid upgrade. They’re also cheaper than ever. But if you’re looking for unique features, the new Powerbeats aren’t pushing any boundaries.

What is it?: The newest pair of Bluetooth workout earbuds from Beats

Don't like: Lack of sealed fit. Around-the-ear hook and cord may not be comfortable for some.

If you’re not sold on completely wireless earbuds for working out, either because you prefer more stability or are afraid of losing one, the new Powerbeats are very good.

Beats made some ergonomic improvements over Powerbeats 3, including making the cord that connects the earbuds round instead of flat. I barely felt the cable as I ran outside, which I was slightly concerned about given that I haven’t worked out with corded Bluetooth earbuds in quite some time. I have really long hair, but the cord rested against my neck and never got tangled in my ponytail. 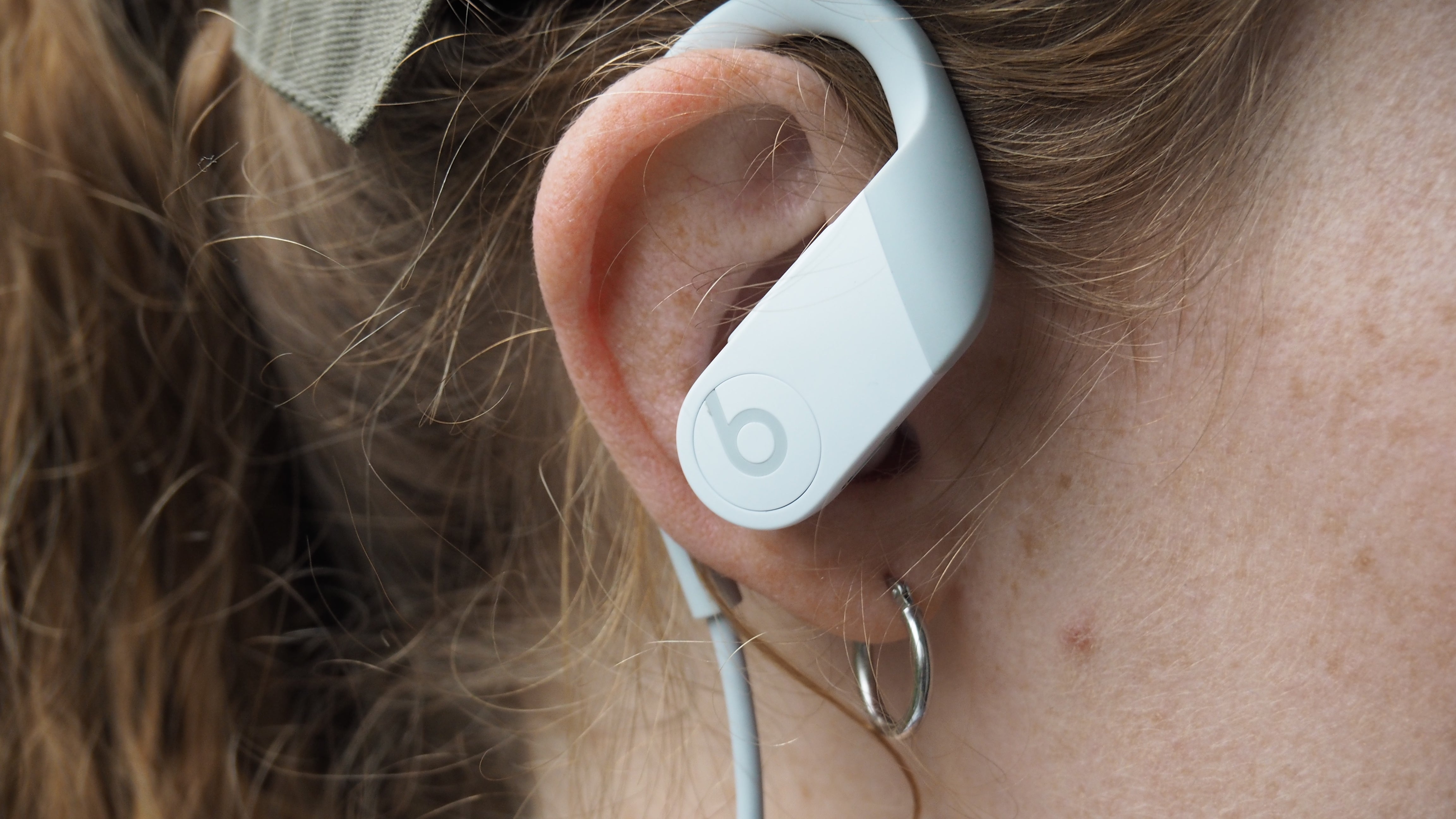 Powerbeats 4 offer a secure fit with an around-the-ear hook and a cord that connects the earbuds. (Photo: Caitlin McGarry/Gizmodo)

I was a big fan of Powerbeats Pro, the first pair of completely wireless Beats earbuds, which are essentially Powerbeats 4 sans cord (and cost an extra £90). The new Powerbeats have the same guts as the Powerbeats Pro, including a 12mm driver and dual beam-forming microphones that recognise when you say, “Hey, Siri.” They both come with four tip sizes, including a double-flanged tip that few other earbud makers offer. And to my ear, they sound basically the same.

Neither set of Powerbeats has active noise cancellation, though when I ran outside with the Powerbeats 4, I didn’t pick up a tonne of ambient noise. The earbuds’ audio did sound a little thin as I ran, especially compared to the Jabra Elite Active 75t I was using just prior to testing out the Powerbeats. But overall, songs sound warm and well-balanced. 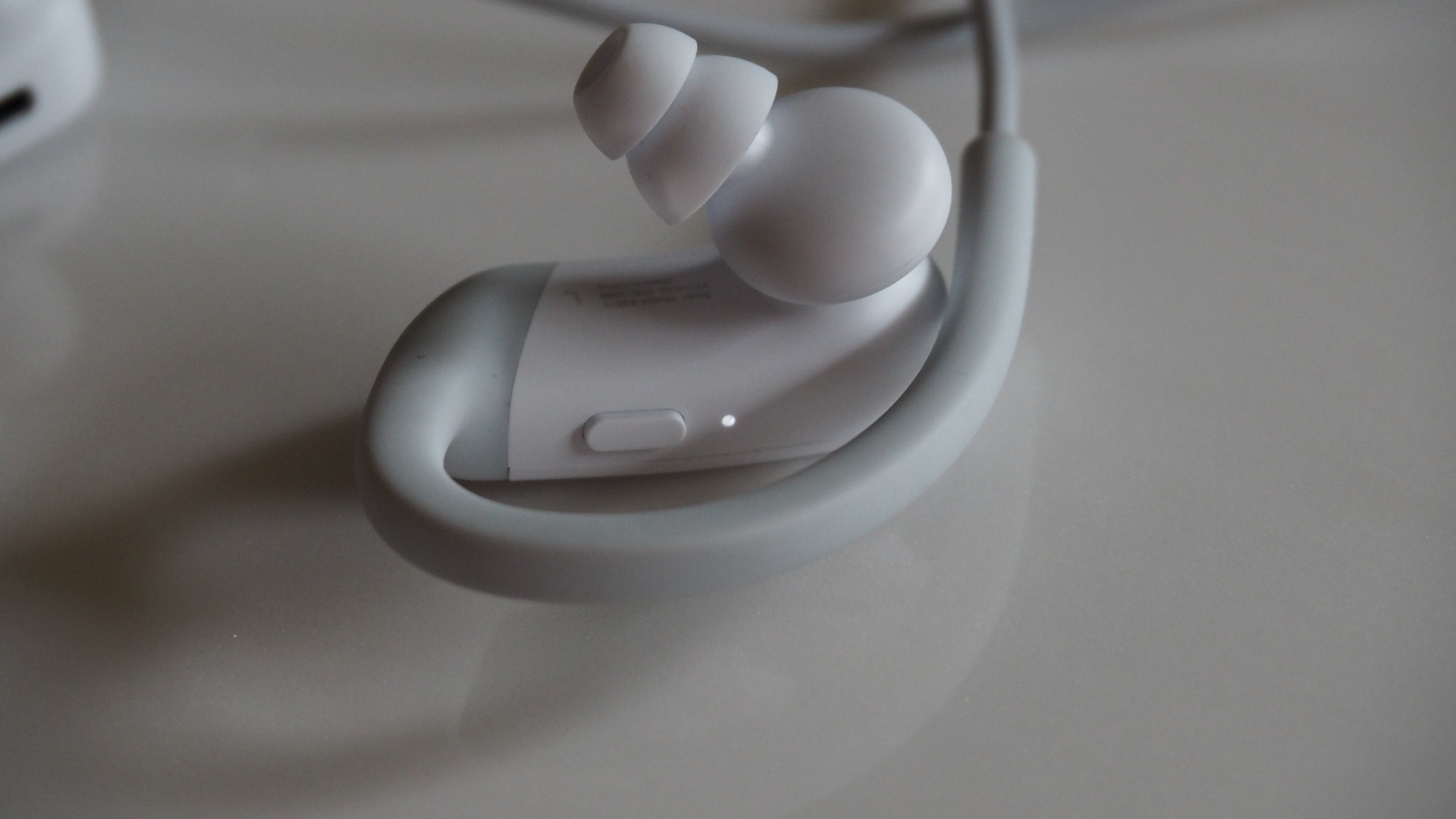 The left earbud sports a power button. You have to physically power down the Powerbeats 4 every time you want to turn them off, which is annoying. (Photo: Caitlin McGarry/Gizmodo)

One of my favourite features in the new Powerbeats is the inclusion of physical controls on the right earbud. Pressing the ‘b’ stops and starts playback, and a volume rocker just above the earbud makes it easy to adjust the audio levels without having to swipe with sweaty fingers. On the left earbud is a power button, and I quickly discovered that unless you power down the earbuds, they just remain on. Forever. (Or at least for a few hours.) The earbuds also don’t auto-pause when you remove them from your ears.

But even though I accidentally left the earbuds powered on a handful of times when not in use, I still have 45 per cent battery life after almost a week of wearing them for daily workouts, phone calls, and listening to music. Beats says the earbuds can last up to 15 hours on a charge, so I’d expect to go about a week and a half without needing to plug in. Like other Apple-owned audio products, the Powerbeats 4 charge via Lightning cable. 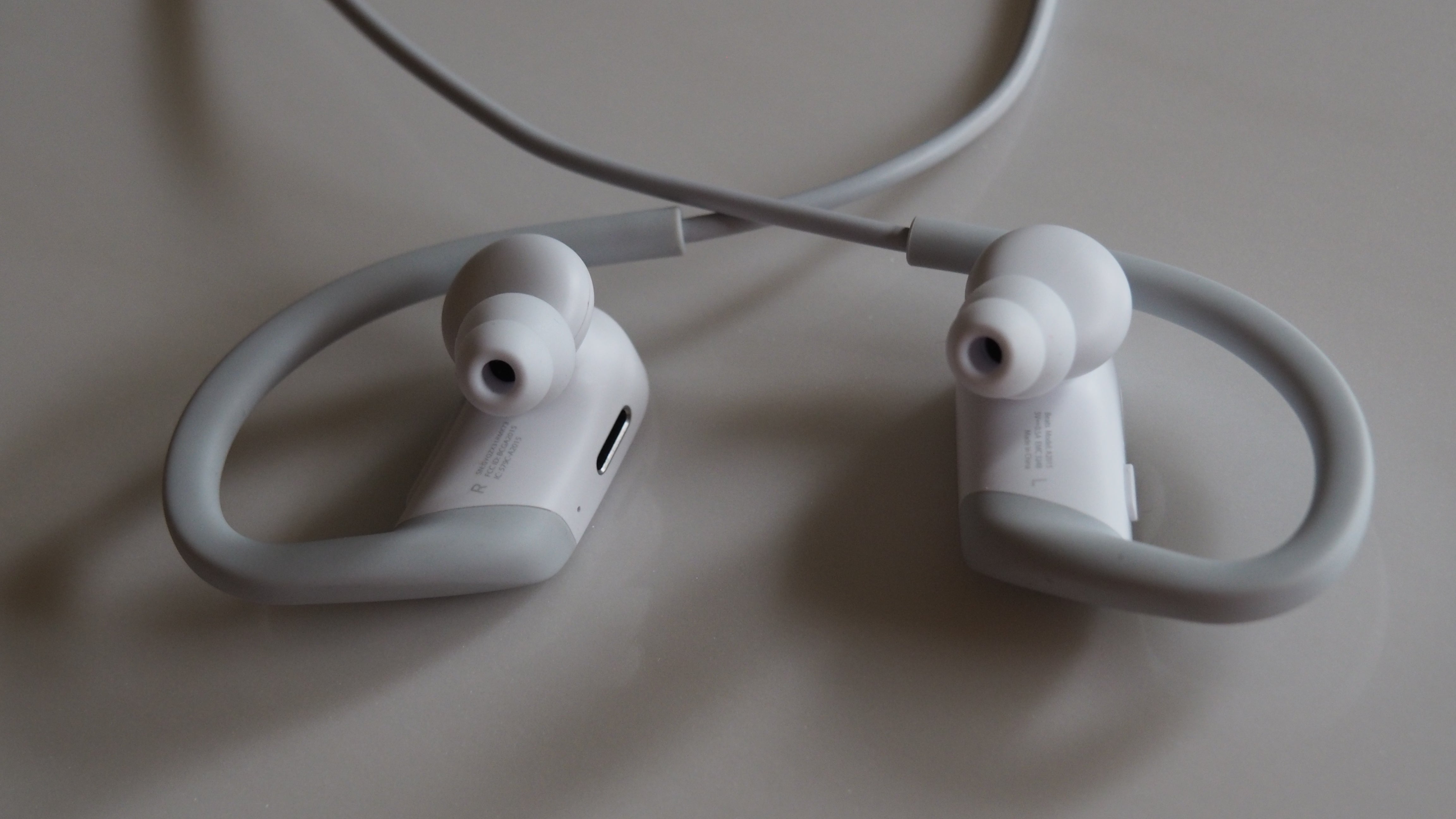 Like other Apple-owned audio devices, the Powerbeats 4 charge up via Lightning. (Photo: Caitlin McGarry/Gizmodo)

Yet compared to truly wireless earbuds, many of which can last up to 28 hours on a charge by juicing up in their charging cases when not in use, 15 hours isn’t all that impressive. It is an upgrade over the last-gen Powerbeats, though, which lasted 12 hours on a charge.

The new Powerbeats are fine. For the person who prefers a cord, wants a stable fit, and likes the Beats brand, which ensures a smooth pairing to an iPhone with Apple’s built-in H1 chip, these earbuds are worth buying – and the price is right.