One of the Rarest Video Game Consoles of All Time Just Sold For £277,000 at Auction

A failed partnership 28 years ago between a pair of gigantic names in gaming has resulted in one of the rarest pieces of hardware in video game history selling at auction today for a staggering $360,000 (£277,000) – and it doesn’t even include a single game.

The Nintendo Play Station, as it’s most commonly referred to as now, was originally known as the Super NES CD-ROM and was co-developed by Sony and Nintendo to bring CD-based games, which could include longer animations, better soundtracks, and improved sound effects, including longer voice samples, to the Super Nintendo through a format known as Super Disc. It was to be both an add-on peripheral for the SNES and Super Famicom consoles, as well as a standalone Sony-branded machine called the Play Station that could play Nintendo cartridges or games via the Super Disc format.

But the relationship between Sony and Nintendo became strained after Nintendo revealed at the 1991 Consumer Electronics Show that it was also working with Philips, a Sony competitor, the day after Sony’s Nintendo Play Station was revealed. Although the two companies tried to patch things up with deals allowing Sony to manufacture SNES-friendly hardware, the relationship eventually ended – but not before two to three hundred prototypes had been built.

Sony went on to develop the PlayStation all on its own, leading it to become one of Nintendo’s most successful competitors in the video game industry, and the Nintendo Play Station become a forgotten footnote in gaming history. That is, until November 2015, when a working prototype of the Nintendo Play Station was discovered in an attic, along with a controller that looked like the Super Famicom’s gamepad, but with Sony branding. It was originally owned by the first president of Sony Computer Entertainment, Olaf Olafsson, who took it with him when he left Sony for Advanta Corporation, a company that eventually went bankrupt, which is how the Nintendo PlayStation prototype was discovered, as part of an auction in 2009 won by Terry Diebold. It ended up sitting in his attic for six years.

The prototype is starting to show its age, with the familiar yellowing of the ABS plastic those older consoles were made from, but at some point since being discovered it made its way into the hands of Ben Heckendorn, who opened it up and repaired the Nintendo Play Station’s CD-ROM drive. There are no CD-based games for it, but it can play music CDs just fine, and happily runs SNES cartridges. Surprisingly, the console is still in good working order, which, when combined with its provenance and rarity, is why it sold for so much today.

Collectors are happy to shell out big money for the rarest pieces of video game memorabilia. Last year a mint-condition original copy of Super Mario Bros., one of the most iconic and popular titles in video game history, was sold by Heritage Auctions (the same auction house handling the Play Station prototype) for $100,150 (£76,941). Not surprisingly, the Nintendo Play Station went for even more money today, but not as much as some were anticipating. Just a few weeks ago, the auction’s top bid was $350,000 (£269,000), but according to a representative from Heritage Auctions, the highest bid was determined to be “not bona fide” and was cancelled by the auction house. 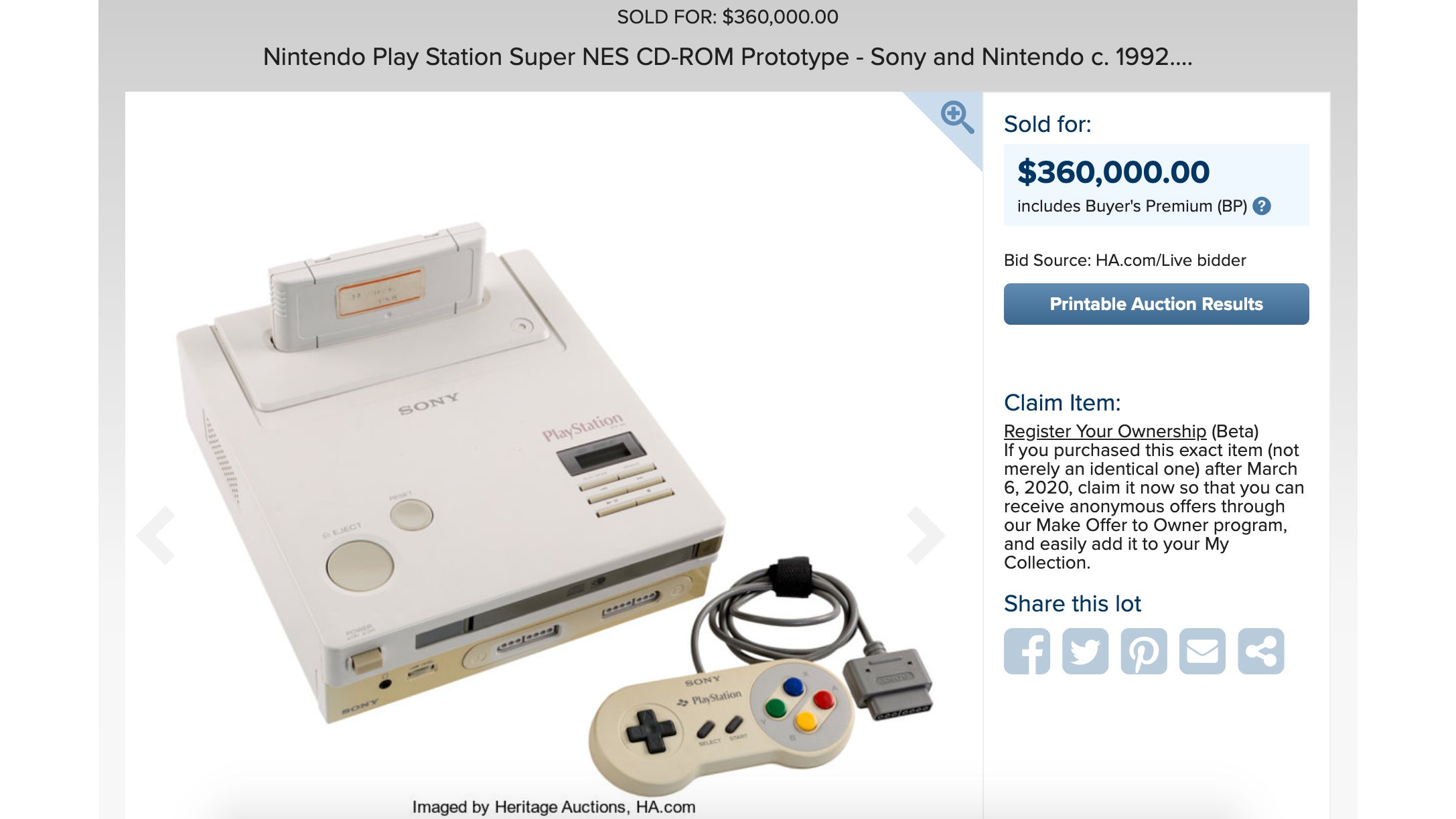 And while $360,000 is nothing to sneeze at, Diebold says he once turned down an offer of $1.2 million (£923,000) for his rare console from an interested collector in Norway, believing the amount wouldn’t have left him much money after it was taxed and all his debts from touring the country with his treasured find were paid off. Something tells us that decision might be at the top of his mind today.