Samsung’s Galaxy S20 is the company’s most affordable flagship, which isn’t saying much: the 6.2-inch smartphone costs £899. It is a very good phone with a very good – dare I say the very best – display of almost any phone on the market (the only better panels being the S20's larger siblings, the S20+ and S20 Ultra). In normal times, I’d say the Galaxy S20 is obviously worth the asking price.

These are not normal times.

It feels a little bizarre to recommend an £899 smartphone when people can’t leave their homes, when unemployment is at record highs, when the last thing anyone cares about is a camera or a processor. But if you need a new phone, and you can find a deal through your carrier, the Galaxy S20 is the Android phone worth buying.

What is it? Samsung's smaller, most affordable flagship

The Galaxy S20 just feels good, which is a weird thing to say, but it’s true. It’s narrow but tall, with a slightly rounded display that extends nearly to the edge. If you have smaller hands, like I do, the S20's almost-normal size makes it easier to do basic tasks with just a thumb than it is on larger phones like the absolutely gigantic S20+ (6.7 inches) and S20 Ultra (6.9 inches). I think those phones are far too big.

You might prefer the more expansive displays on those larger phones, but the S20's panel is still incredibly stunning, even when I had to settle for the lower full-HD+ resolution to take advantage of the buttery smooth 120Hz refresh rate. (Samsung doesn’t support that at the full wide quad-HD resolution, unfortunately.) Scrolling through webpages was a joy, which I cringe to say but is actually true. And I played endless rounds of Asphalt 9, so immersed in the beautiful display (along with my BMW’s racing prowess and my own drifting skills) that I burned almost an entire hour after intending to race only San Francisco. 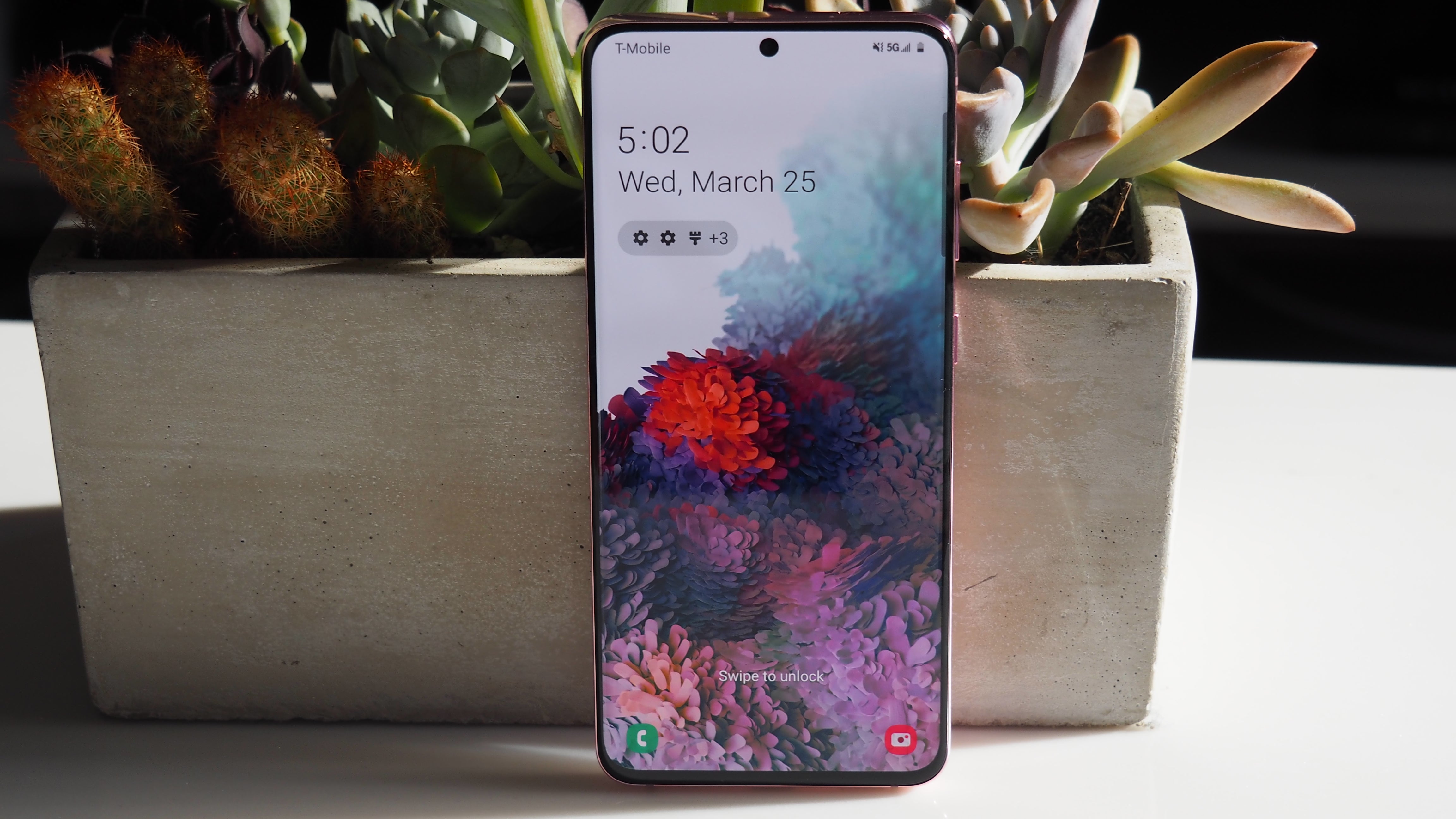 The S20 is also (sort of) future-proofed with a built-in 5G modem. However, the smallest Samsung flagship is only compatible with the low-band sub-6GHz 5G spectrum. Future 5G networks will be built on millimeter-wave spectrum, which offers much faster speeds than you get with low-band but also requires you to stand outside directly beneath a 5G node and angle your phone in the air in such a way as to catch a signal. You can get gigabit speeds when you do that, yes, but it’s not really conducive to living your actual life.

Using the Galaxy S20, I averaged download speeds of 85 Mbps on T-Mobile’s 5G network in the US – that sounds pitiful, but compared to the 33 Mbps I saw with an iPhone XS on AT&T’s '5GE' network there, it’s moderately fast. But true 5G will require a mix of high-, mid-, and low-band spectrum, and the fact that the S20 can’t take advantage of all those spectrums and those ultra-fast speeds is a disadvantage.

Like the S20+ and S20 Ultra, the base S20 packs in Qualcomm’s latest Snapdragon 865 processor, 12GB of RAM and 128GB of storage, with a microSD slot to expand your storage. There is no headphone jack, for those of you clinging to a world in which smartphone makers care about your wired headphones. (They do not. I’m sorry.) 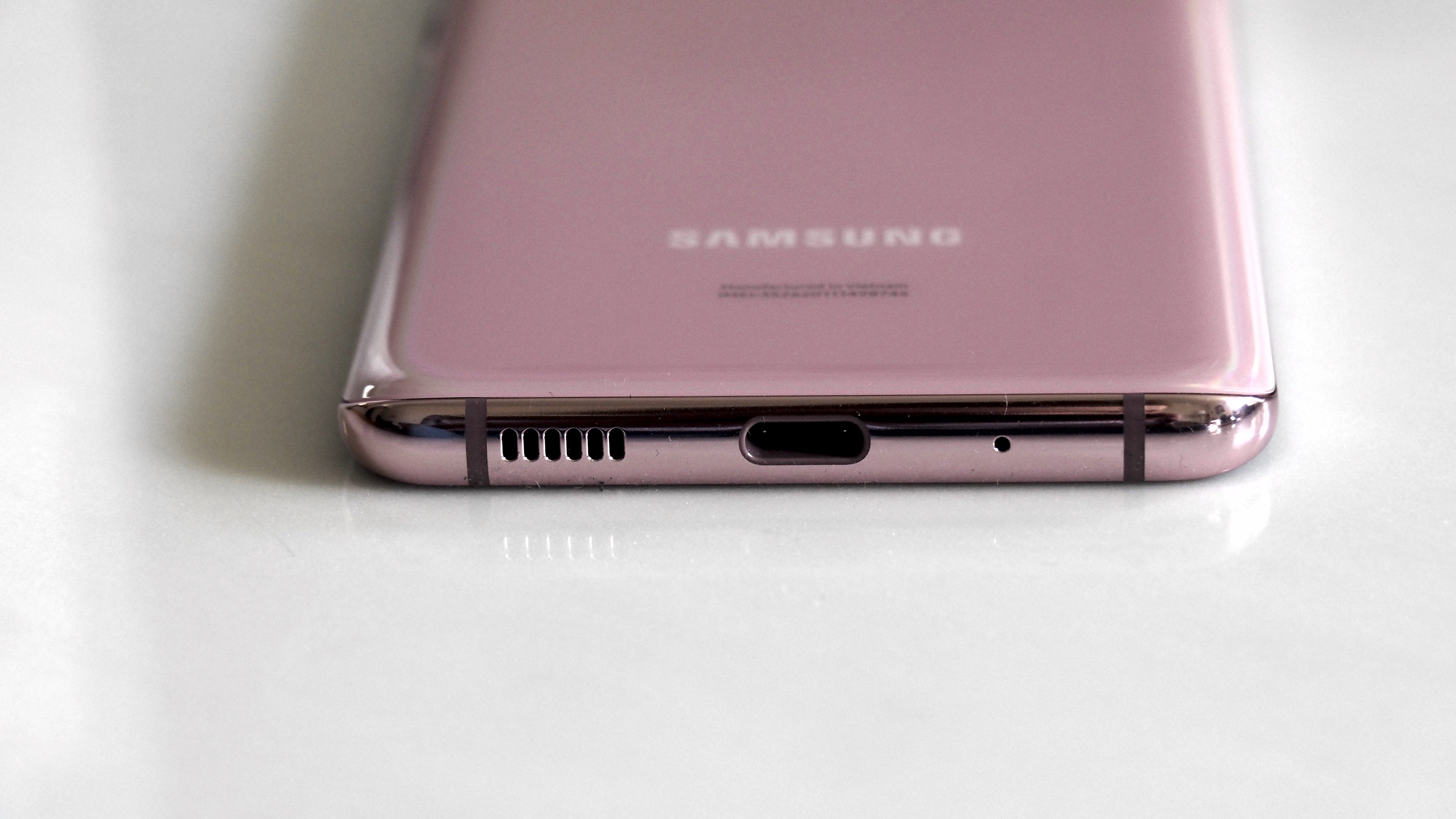 Sorry everyone, but there’s no headphone jack here.

The battery difference isn’t quite negligible but for £300 less you get the same exact cameras in the S20 that you do in the S20+: a triple-lens rear camera with a 12-MP wide-angle, 12-MP ultra-wide, and 64-MP telephoto lens with 3x hybrid optical zoom.

I tested the S20's zoom with a photograph of the Hollywood sign from a vantage point in nearby Beachwood Canyon, Los Angeles. Compared to the iPhone 11 Pro Max, the S20's zoom resulted in a smoother image – the iPhone’s zoom captured more true-to-life colour, but the sharper details have artifacts that the S20's zoom removes. 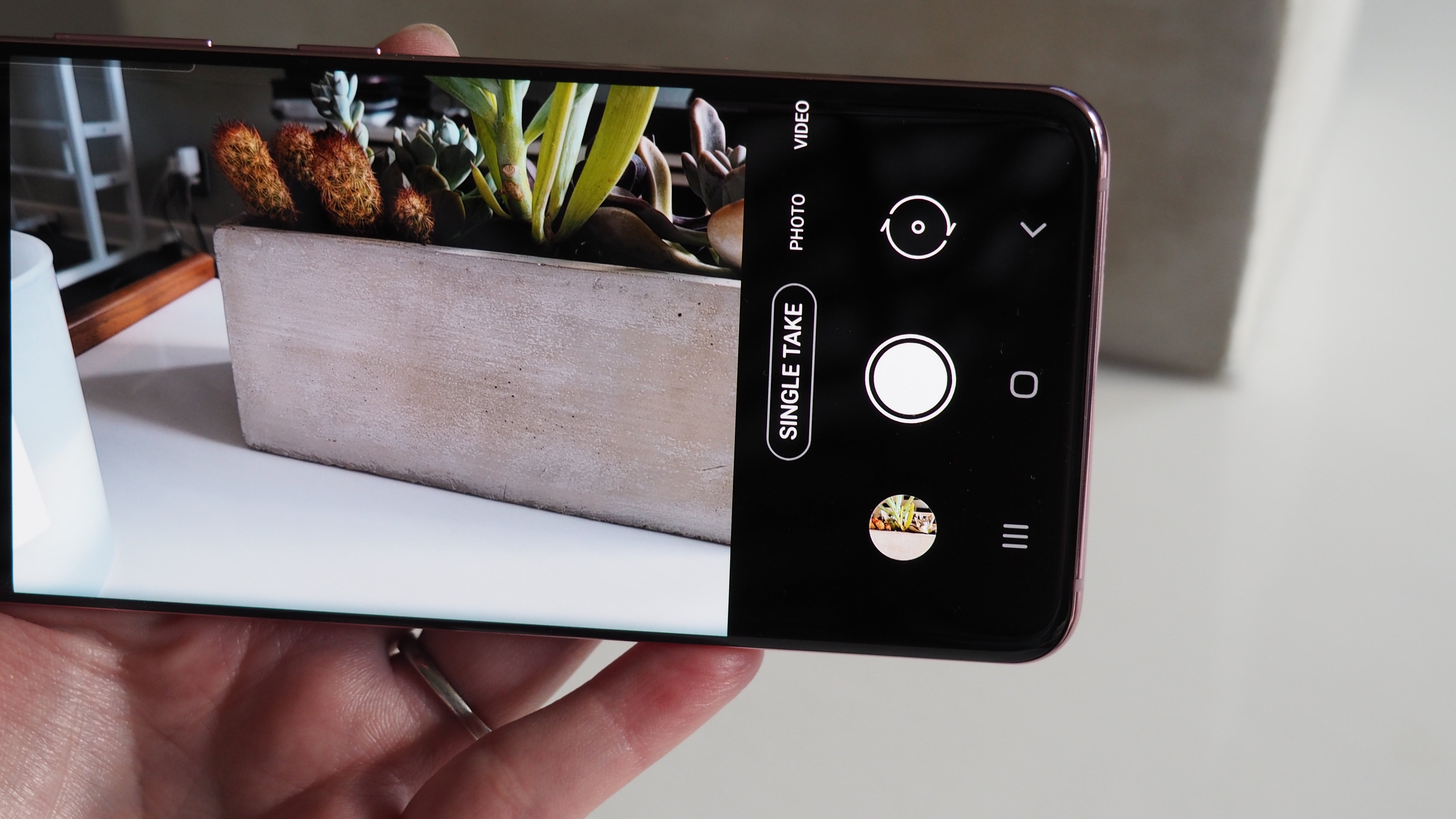 Samsung has bloated the S20 with photography features, but many of them (like Single Take) seem gimmicky in use.

I also tested the zoom in the S20's Night Mode, comparing it to the Pixel 4's excellent Night Sight and Super Res Zoom in a photograph of Griffith Observatory in Los Angeles. The Pixel was the clear winner in that match-up, though its zoom wasn’t able to get as close to the observatory – the S20's closer angle didn’t result in a better photo because the observatory is pixellated.

The S20's Night Mode fared better without zoom in a photo of a Hollywood Regency-style building, though the Pixel 4 once again captured a better shot with more vivid greens in both the building itself and the surrounding trees.

I also don’t love the S20's Love Focus (Samsung’s version of Portrait Mode), which I tested in a shot of myself compared to the Pixel 4 and iPhone 11 Pro Max. The iPhone’s image colour is more natural, as it usually is, while the S20 gets way too close to my face, despite being positioned in the same exact spot as the other two phones.

The Galaxy S20 smooths out zoomed-in photos more than the iPhone 11 Pro Max.

The S20's landscape is moodier, with bluer blues and greener greens than the Pixel 4.

The S20's Live Focus zooms in on a subject more than the iPhone does. The iPhone’s portraits are also more true to life.

The Pixel 4's portraits are darker than the S20's, but do a better job at recognising my curls and blurring around them.

Another issue I had with the S20's camera was its lag. Switching between various modes in the camera preview occasionally took forever, which isn’t ideal when you’re trying to capture a moment on the fly.

Overall, the S20's cameras are fine, though features like Night Hyperlapse and Single Take are gimmicky (and also now available on the S10 and Note 10 with a software update, so there’s no need to upgrade). Samsung has made its flagships’ cameras bloated with features without taking the time to refine the ones people actually use, like Night Mode and Live Focus.

The S20 is a good phone despite the shortcomings compared to its pricier siblings. Yet it’s tough to recommend that anyone spend just shy of £900 on anything in the midst of [gestures at literally everything], and I feel slightly tone-deaf suggesting that anyone spend any amount of money on anything during this crisis. But when this passes, and you need to buy a new phone, the S20 is beautiful, fast and will last you some time.