Scientists Discover Ice Age Structure Made From Bones of 60 Mammoths

An unusually large structure from the last ice age built from the bones of dozens of woolly mammoths has been uncovered in Russia. Dating back some 25,000 years, it’s the oldest known structure of its kind – but its purpose isn’t entirely clear.

Circular structures made from mammoth bones are surprisingly common in the archaeological record, dating to around 22,000 years ago and appearing across much of ice age Eastern Europe. Scientists working at the Kostenki 11 site, located next to the Don River near the Russian city of Voronezh, have found the largest one yet: a 12.5-metre-wide structure (41-foot) made from hundreds of woolly mammoth bones. The dwelling was radiocarbon dated to 25,000 years old, making it the oldest known mammoth bone structure in the world. Details of this remarkable discovery were published this week in Antiquity.

These structures are typically surrounded by a series of large pits, the purpose of which isn’t known. It’s possible the pits were a place to store food or bones used for burning. They could have also been a place to dump waste or quarries that formed during construction. As to the overall purpose of the mammoth-bone structures themselves, that’s also unclear. 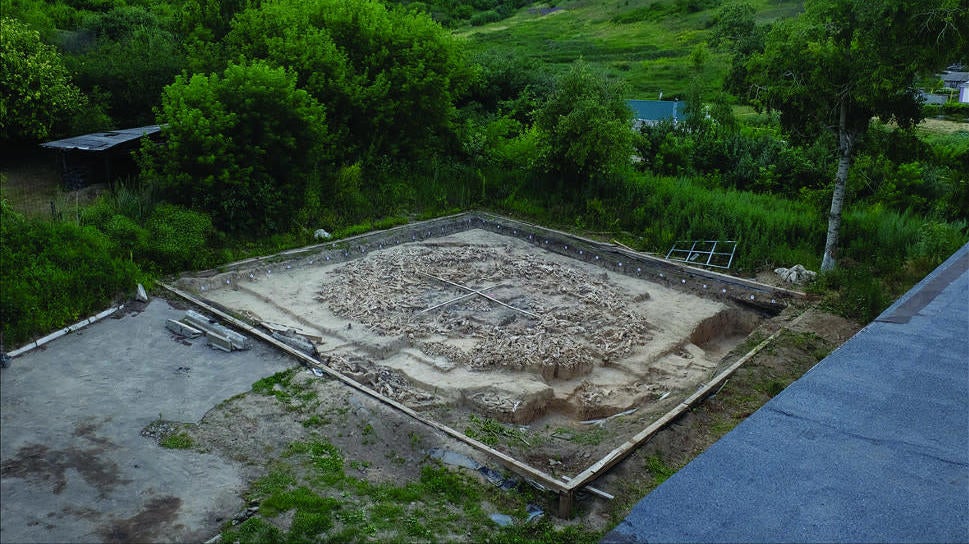 “Other than being explained as ‘dwellings,’ sites of this type have previously been interpreted as having potential ritual significance,” Alexander Pryor, the first author of the new study and a researcher from the University of Exeter, said in an email to Gizmodo. “However, exactly what this ritual significance might have been is difficult to say from archaeology alone.”

This is not the first time that archaeologists have found a mammoth bone structure at Kostenki 11. Back in the 1950s and 1960s, Soviet scientists found a pair of smaller structures, also made from mammoth bones.

In 2013, archaeologists were conducting surveys in the area when they stumbled upon the third structure at Kostenki 11, which is located on the Russian Plain and approximately 520 kilometres (323 miles) due south of Moscow. Excavations lasted for three years and included a technique known as flotation, in which water and sieves are used to separate archaeological material from the soil. A key advantage of this approach is that it allows for the discovery of exceptionally small remnants and artefacts. 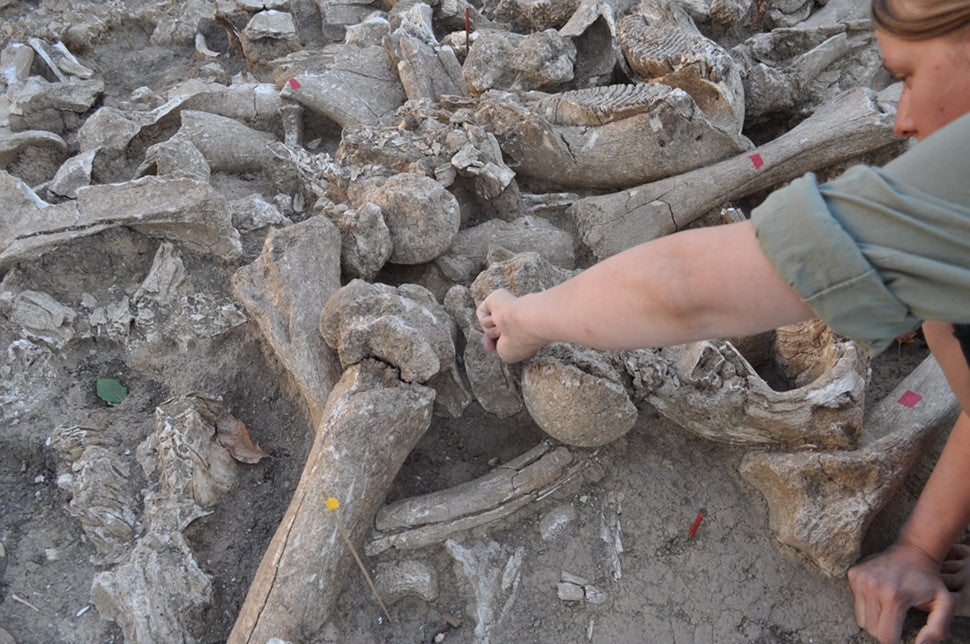 That Pleistocene humans living in Eastern Europe at the time would bother to build such structures is definitely a surprise. Hunter-gatherers of the Upper Palaeolithic lived mobile, nomadic lifestyles, and making permanent structures is not something typically associated with their mode of existence.

“Sourcing so many mammoth bones, from at least 60 different mammoths, is a significant challenge,” said Pryor. “These would have been gathered either from recent kills or by scavenging bones from long-dead carcasses found around the landscape. Either way, mammoth bones are really heavy, particularly when fresh, and simply carrying the bones around would have taken an enormous amount of work.”

No signs of butchery were found on the bones, but Pryor said that’s not altogether surprising. These animals were so big that it was relatively easy to remove meat and fats without leaving obvious traces on the bones, he said. A similar thing has been documented in modern times, in which humans butchered elephants using metal knives and without marking the bones, he added. 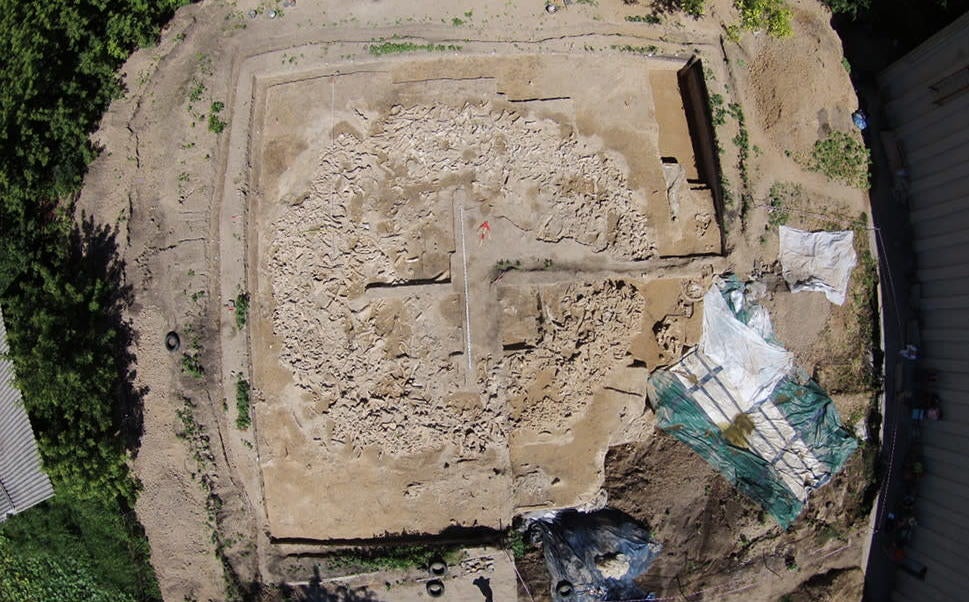 Using the flotation technique, the researchers uncovered evidence of charcoal, burnt bone, bits of stone tools, and soft plant tissue associated with edible roots or tubers. Excitingly, the discovery hints at the foods eaten by Upper Palaeolithic humans in Central Europe. What’s more, the site yielded the first meaningful collection of charred plant remains from a site of this kind, which means trees were still around in the area during the frigid time period, according to the new research.

The humans who built these structures burned their wood inside, so the dwelling likely served as a refuge from the harsh ice age winters and possibly year-round, according to the authors. It might have also been a place to store and stockpile food.

“If at least some of these mammoths were hunted, this is going to generate a lot of food from each kill,” said Pryor. “Therefore, preserving and storing that food could be a really significant part of what humans were doing there,” but more research will be required to suss this out, he said. And indeed, the next stage of the project will focus on the potential role of the structure as a place to store and stockpile food. 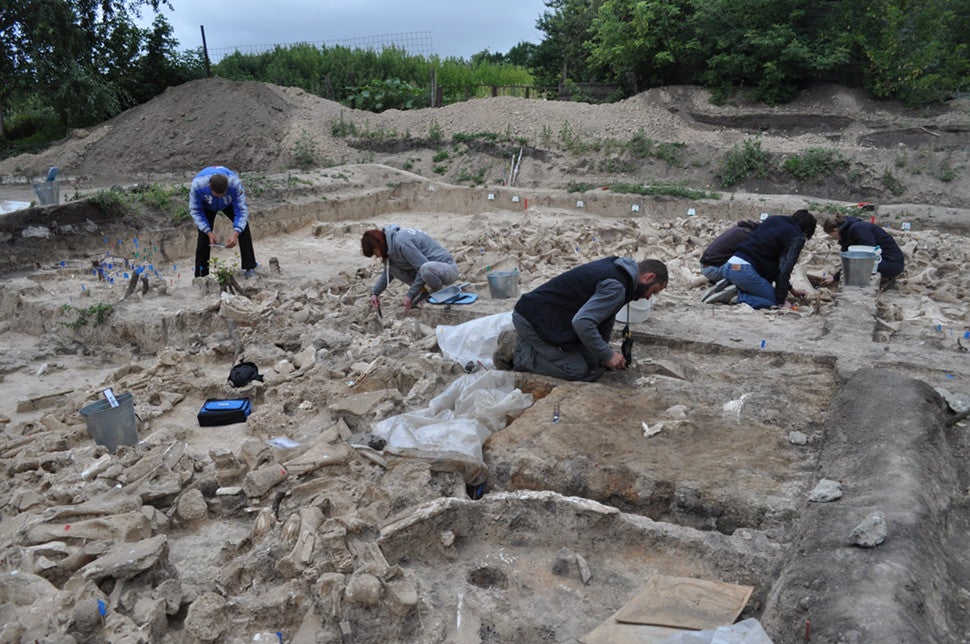 The structure might have also carried ritualistic significance; perhaps it was some kind of shrine or monument in honour of woolly mammoths. That mammoths held an important spiritual role in the lives of these humans is not a stretch of the imagination.

Importantly, Pryor and his colleagues could not find evidence consistent with the idea that the dwellings were a place for long-term, day-to-day habitation.

“It is difficult to imagine how an area this large could have been roofed,” Pryor told Gizmodo. “Some of the bones that make up the ring were found in articulation – for example groups of vertebrae – indicating that at least some of the bones still had cartilage and fat attached when they were added to the pile. This would have been smelly, and would have attracted scavengers including wolves and foxes, which is not great if this was a dwelling.”

There weren’t many stone chips at the site linked to the manufacture of stone tools, compared to similar sites. “This suggests the intensity of activity at the site was lower than might be expected from a dwelling and was a real surprise given the time and effort invested by the people that built the site,” Pryor said.

This discovery shows that hunter-gatherers were more crafty and strategic than is typically assumed. Instead of mindlessly following animal herds and picking nuts and berries along the way, these humans were actively planning for the future and building structures accordingly. At least, if this particular interpretation is correct. Hopefully the team will succeed during the next stage of the project and shed new light on this remarkable structure.