Seismometers around the world are recording the decreased seismic activity resulting from people staying home amid covid-19 social distancing orders.

These detectors measure seismic waves through Earth’s crust, but they also pick up humans moving around, industry, and traffic in the form of higher-frequency noise patterns. Amid stay-at-home orders, Royal Observatory of Belgium geologist and seismologist Thomas Lecocq decided to look at the Royal Observatory’s seismometer and noticed that its noise levels in Brussels looked closer to winter vacation than a work day. Other seismologists have found similar noise reduction in their local seismometers.

The surface station at the Royal Observatory of Belgium was once in a suburb, Lecocq told Gizmodo. But the city has expanded, and the seismometers’ readings now reflect the bustling human activity in the city. “When it snows, it’s quiet, and when there’s a marathon, we can see people running,” he said. 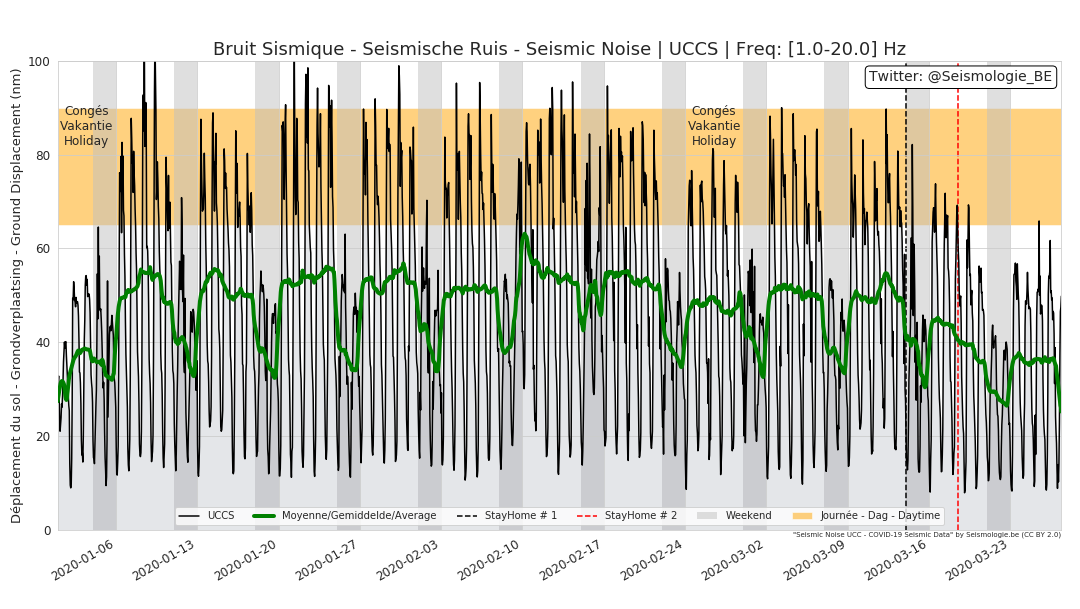 A seismometer reading in Belgium over the past year, demonstrating a decline in human-made seismic noise in the past two weeks. The green line denotes average noise. The levels are approaching those during winter holidays. (Graphic: Thomas Lecocq)

Lecocq studies subtle changes in seismic noise. There aren’t a lot of earthquakes in Belgium, but by characterising the noise, they can figure out how to remove it in order to see weaker or more distant events. Additionally, humans aren’t the only ones generating seismic noise; the wind and the ocean do as well, and seismologists can use this noise to monitor and image Earth’s crust. So it only made sense for him to look at the impact of the ongoing covid-19 pandemic. The Royal Observatory of Belgium posted the graph demonstrating the decreased seismic noise on social media.

The readings made sense to Susan Hough, United States Geological Survey seismologist. “If almost everyone stayed home and didn’t move a muscle, the daytime noise levels would approach the usual nighttime levels,” she told Gizmodo in an email.

Other seismologists have run analyses on seismometers elsewhere. The UK recorded a decrease in noise from a station along the M4, while stations in France and New Zealand have also detected the quieter seismic environment as people stay home. Lecocq wrote a tutorial for those interested in looking at other seismic stations.

These graphs aren’t much more than scientific curiosity, but the temporary decrease in noise could be useful to seismologists, as they can extract more information from their seismic data, Lecocq told Gizmodo. These seismometers now have better sensitivity to the higher-frequency events whose signatures are otherwise muddied by human activity, such as the wind and behaviour of the groundwater table. Not only is there less seismic noise, but there’s less audible noise as well; Lecocq envisioned a study correlating audible noise with seismic noise and even studying how audible noise has increased in cities with the help of seismology data.

These measurements serve as a stark reminder of the ongoing pandemic and of the many ways human behaviour impacts the planet.