The Best Apps for Getting Real Work Done on Your Phone

The debate about whether you can get serious work done on a tablet continues, but what about the even smaller computing device you carry around in your pocket? Apple, Google and Microsoft all make mini versions of their office apps for use on the go, and here’s how they stack up against each other – plus the answer to whether you actually can do any work on a phone.

The Microsoft Office suite is the first productivity toolkit that most people will think of, and the mobile versions of Word (Android, iOS), Excel (Android, iOS), and PowerPoint (Android, iOS) are full and free to use – you don’t have to be an Office 365 subscriber to use them, unlike the tablet versions (for devices with screens above 10.1 inches).

Microsoft’s expertise in making these office programs shines through, and on the whole, they translate very well to mobile – at least in terms of viewing documents, spreadsheets, and presentations. Even more complicated files, packed with graphs and tables and images, come up on screen in a snap. 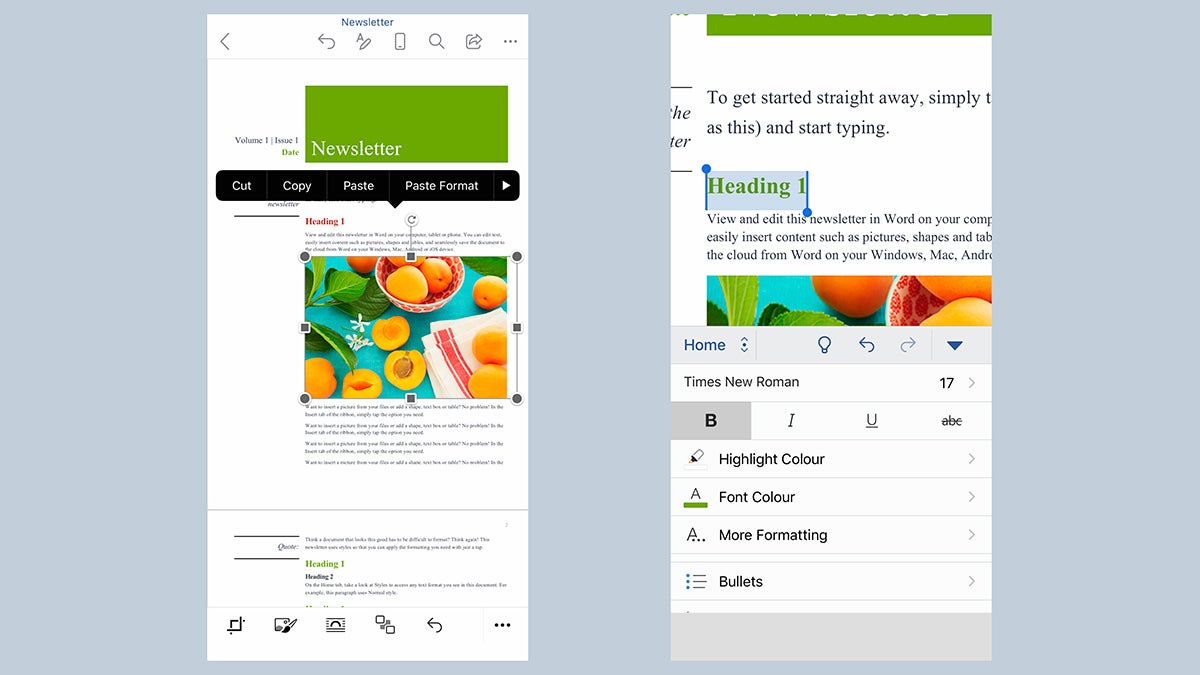 The restrictions of a phone display mean these apps are limited in terms of the options you get on-screen at any one time, but they’re intelligent in the way they go about it. Select text, for example, and formatting options pop up; select a column in Excel, and you get options for sorting that column as well as at-a-glance averages and totals.

Microsoft has been clever here in the way information is presented. In Word, you can switch between a printed view layout and a mobile view that’s easier to read on a smaller screen, while PowerPoint stacks slides on top of each other so you can see each part of your slideshow in context. 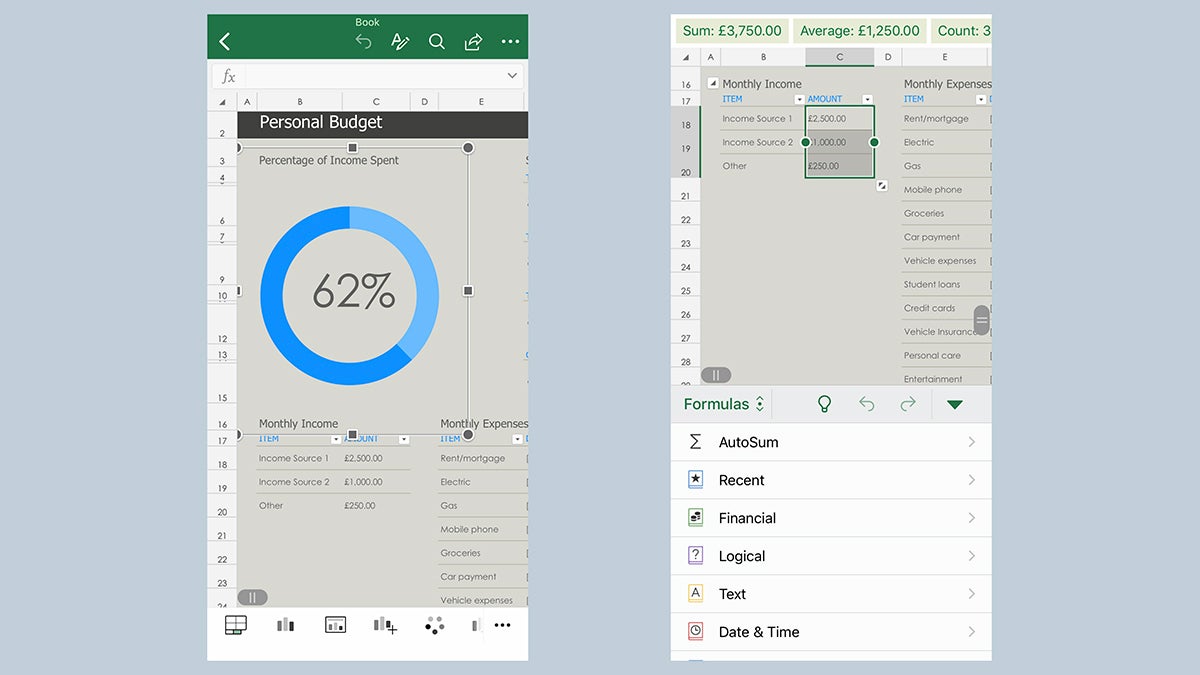 When you need an option – whether it’s cropping a photo you’ve imported in PowerPoint or changing the layout of a graph in Excel—the Office apps seem to know what settings to put at your fingertips and when. You can pull up more detailed menus when needed, and hide them away when you’re just getting on with some editing.

The limitations that do exist are at the more obscure end of the feature list: You can’t merge revisions on a document in Word, or set up new conditional formatting rules in Excel, or create custom animations in PowerPoint, for example. Overall, though, Microsoft has managed to carry a serious amount of the functionality over from the desktop. 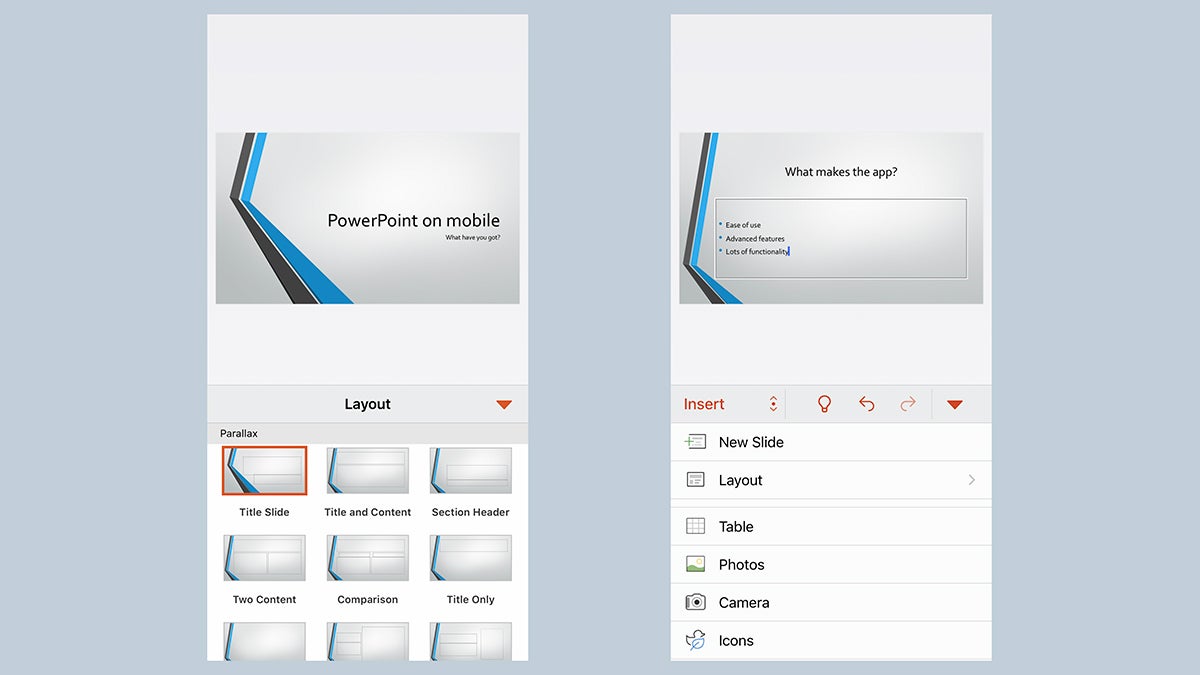 If you need to get complex files created or edited on the go, then the Microsoft apps are the ones we’d turn to – while the alternatives might have the edge in terms of ease of use and overall polish, Microsoft’s suite of mobile apps can simply do more, whether that’s in the chart types, slide transitions, or page layouts. OneDrive hasn’t always done a fantastic job in the cloud storage and syncing department, but it has now evolved to be more than capable of keeping your files updated across multiple devices.

It’s also worth mentioning that Microsoft just launched a unified Office app for Android and iOS. While the separate apps will continue to be available, this combined app gives you easier access to Word, Excel and PowerPoint on mobile, and a few extra features such as being able to create documents and spreadsheets from scanned images. It seems Microsoft is very much committed to improving Office on mobile in the future, too.

If you’re working in a desktop web browser, there’s little doubt that Google’s office suite is the slickest around, but mobile apps are also available for working on the go: Google Docs (Android, iOS), Google Sheets (Android, iOS), and Google Slides (Android, iOS).

The chunky, simple interface choices that Google makes in its web apps are in evidence again here, and the menus and screens you’ll come across in Docs, Sheets, and Slides aren’t as busy or as comprehensive as the ones you’ll find in Word, Excel, and PowerPoint – which may be a plus or a minus, depending on what you’re after from the office apps on your phone. 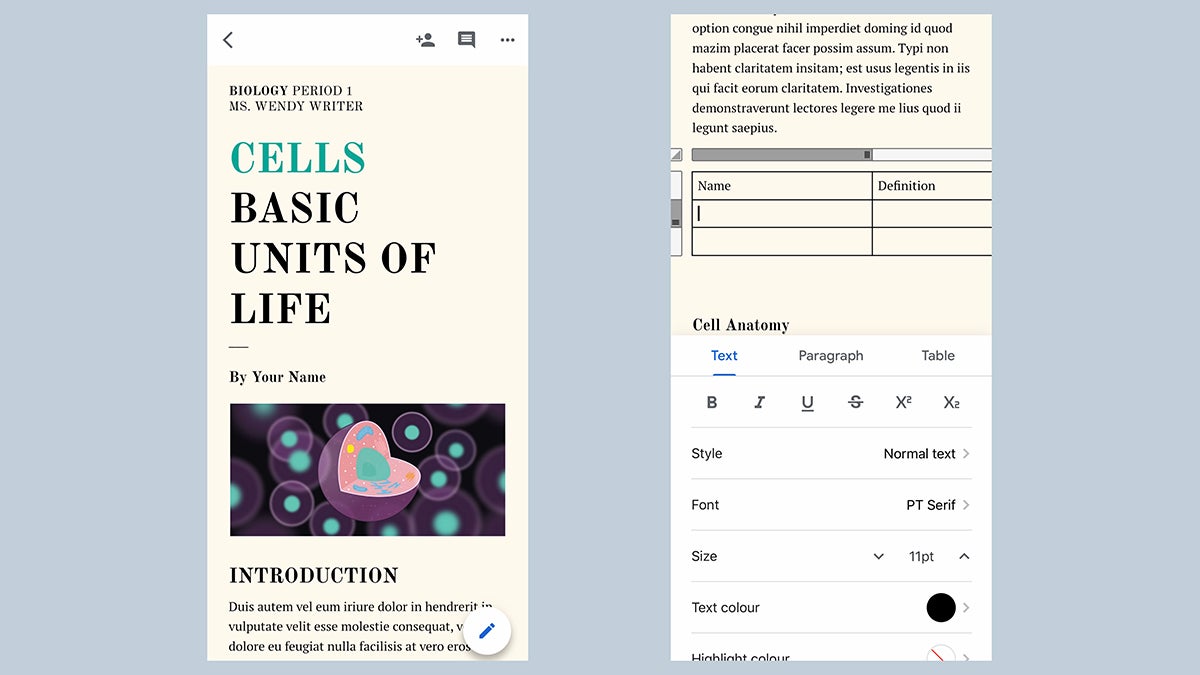 Google’s apps aren’t quite as good as the Microsoft ones when it comes to bouncing between different features – formatting text, dropping in charts, creating tables and so on – and they don’t have as many features in total either (you can’t edit transitions in Slides, for example, or freeze panes in Sheets).

That’s not to say these apps are bad, but they’re focused on simplicity and speed, rather than trying to cater for as many different features as possible. Where they shine is in letting you do the basics of editing text, or spreadsheet cells, or presentation slides, but they’re not the tools you’d choose to create sophisticated files from scratch on mobile. 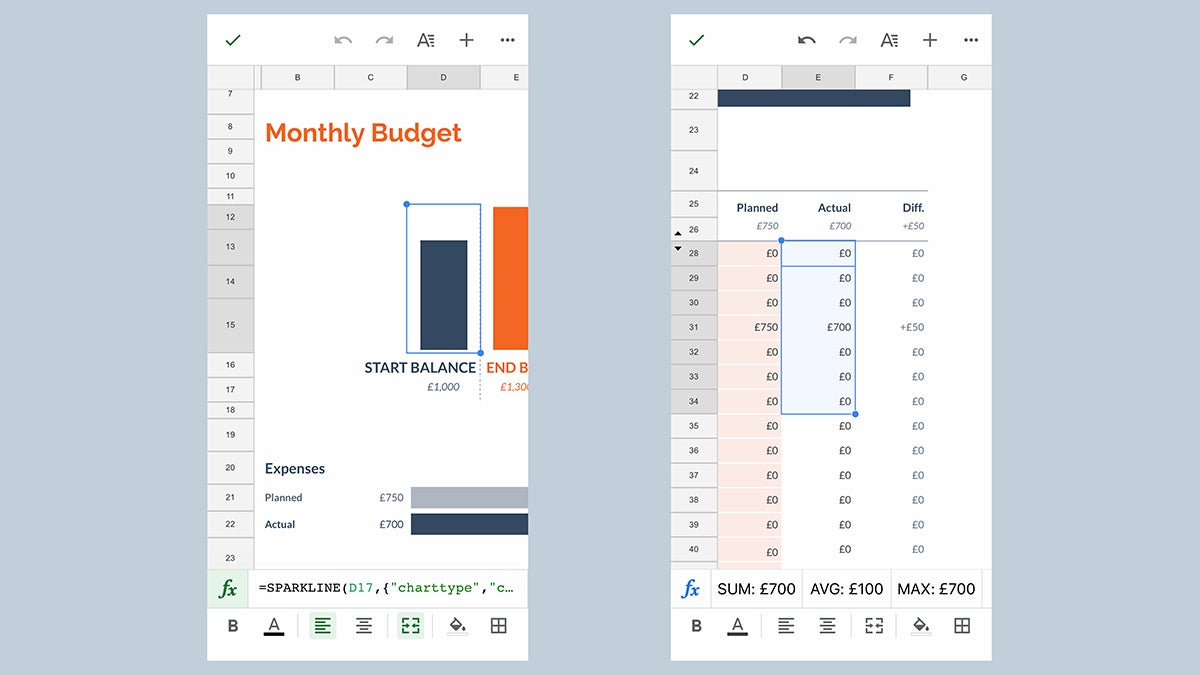 On the whole, the apps make good use of the available space on a mobile screen. When it comes to formatting text, for example, your options are stacked on top of each other, so you can quickly change colours, font sizes, and styles, and create bulleted or numbered lists with a few taps. Insert a chart, and all your options are just as smartly laid out.

A lot of observations you can make about Docs, Sheets, and Slides on the web also apply on mobile as well – they’re supremely easy to get started with, and let you create something simple in no time at all, and aren’t weighed down with decades of legacy software history from the desktop. 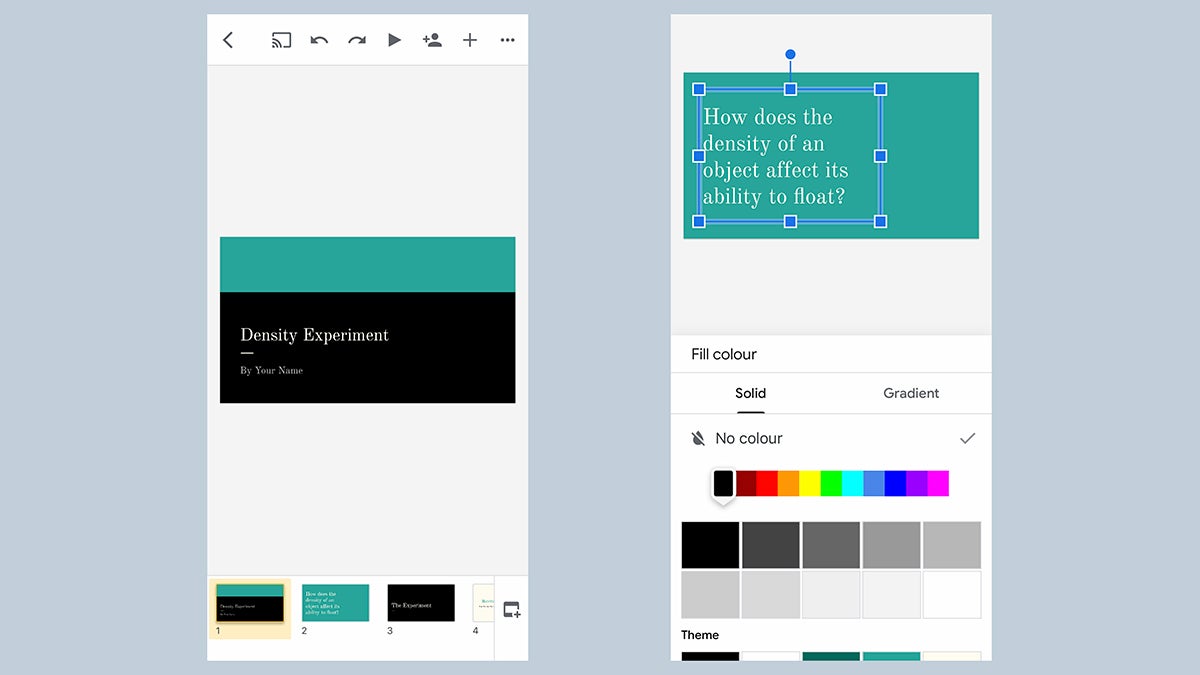 Integration with other Google apps and services is excellent of course (beaming presentations over to a Chromecast device is easy, for example), and so is support for collaboration: working with multiple users on a document, spreadsheet or presentation is almost as straightforward as it is in a desktop web browser.

Google’s cloud storage and syncing remain second to none too, and if you primarily use Docs, Sheets, and Slides on the web, then the mobile apps have enough about them that you can at least do basic edits on your phone. If you need more complex file editing and creation though, you might consider switching to Microsoft’s alternatives.

Apple’s office apps don’t often get much love in the iOS, iPadOS, or macOS updates that happen every year, but they’re still there, chugging along and available for free across all Apple devices. If you don’t already have them, you can download Pages for iOS, Numbers for iOS, and Keynote for iOS.

They’re the obvious choice if you spend a lot of time working across Apple devices: They don’t offer as many features and functions as Microsoft Office, or the ease-of-use and slickness of Google’s apps, but they hit a nice balance between the two. There are no Android versions, of course, so they’re not an option if you don’t have an iPhone. 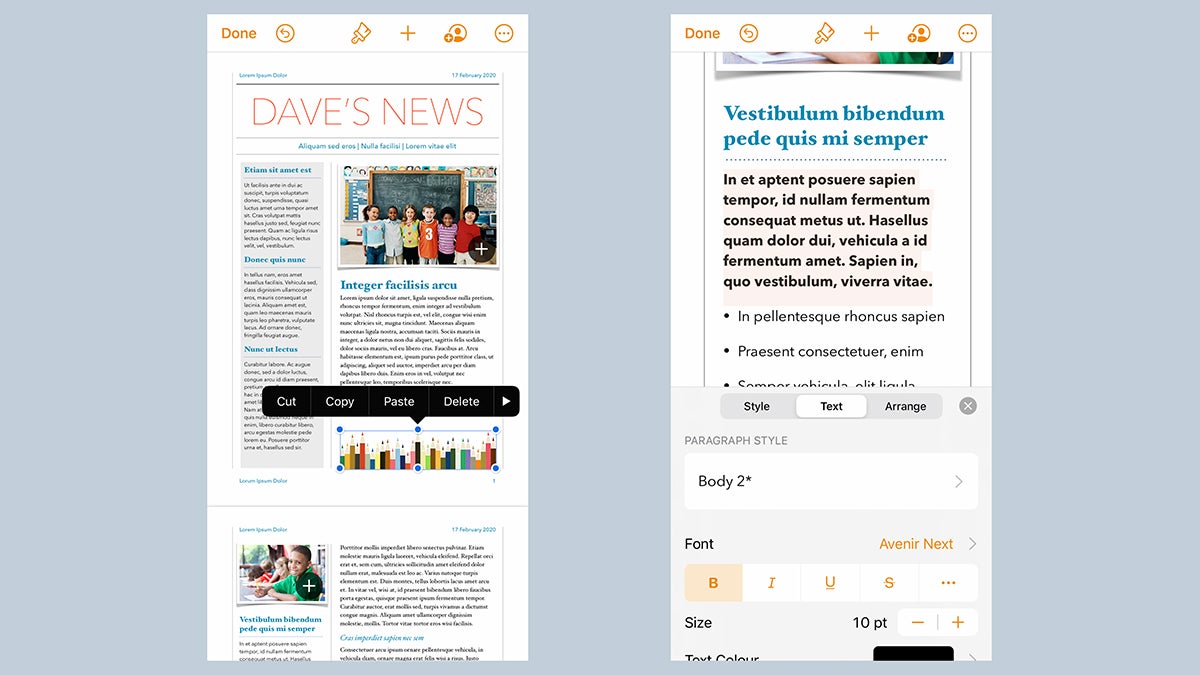 Apple has done a good job here of bringing the features and tools you need most often to the front and centre of the interface: Most of the time, when you need to do something, it’s pretty obvious how to do it. From moving pictures around a page to adding formatting to a group of spreadsheet cells, these apps aren’t difficult to use.

The apps scale up well to more advanced features too – dropping tables into Pages, adding formulas to Numbers, working with transitions in Keynote. The interface never feels cluttered or overbearing, and you won’t have to spend much time hunting around to find the editing option that you need. 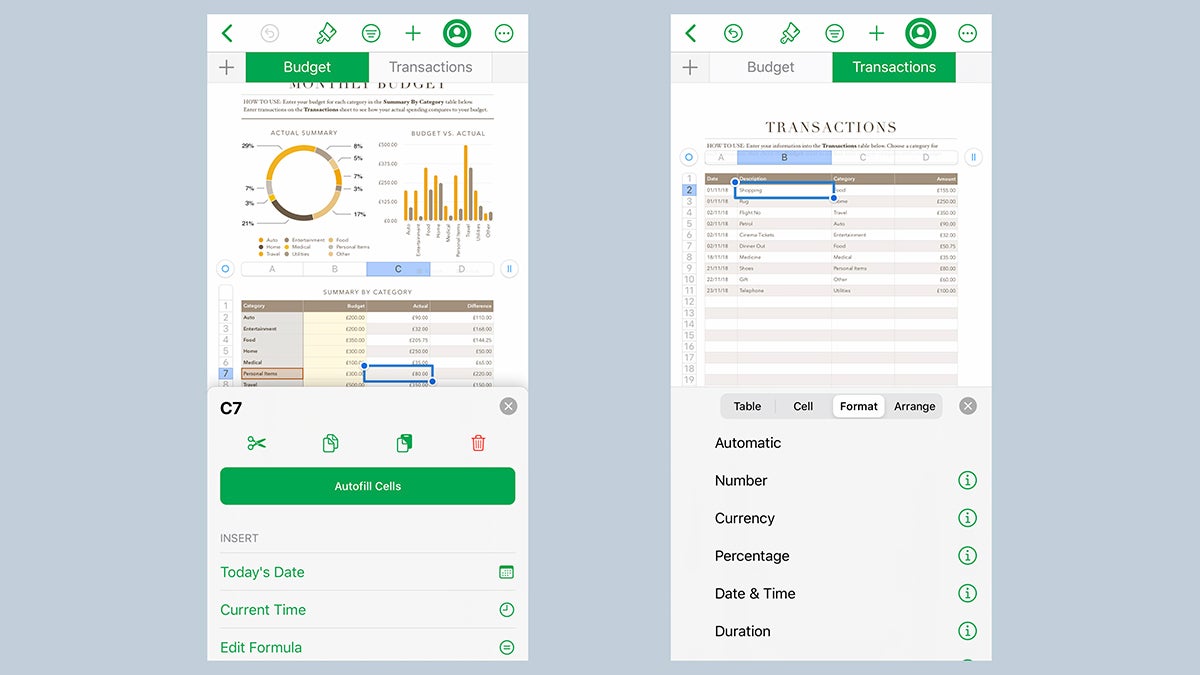 It’s fair to say that power users are going to gravitate more towards Word, Excel, and PowerPoint: From the layouts you can create, to the complexity of files you can work with, to the sheer depth of formatting options, it’s the Microsoft apps that usually come out on top. That said, the Apple equivalents have enough about them to satisfy most iOS users.

Collaboration is now much easier than it used to be, and if you need to work on files with other people than Pages, Numbers and Keynote can take care of it – and track all the changes as they’re made, too. iCloud Drive is improving all the time as well, and cross-device syncing and cloud storage is not the problem that it once was for these apps. 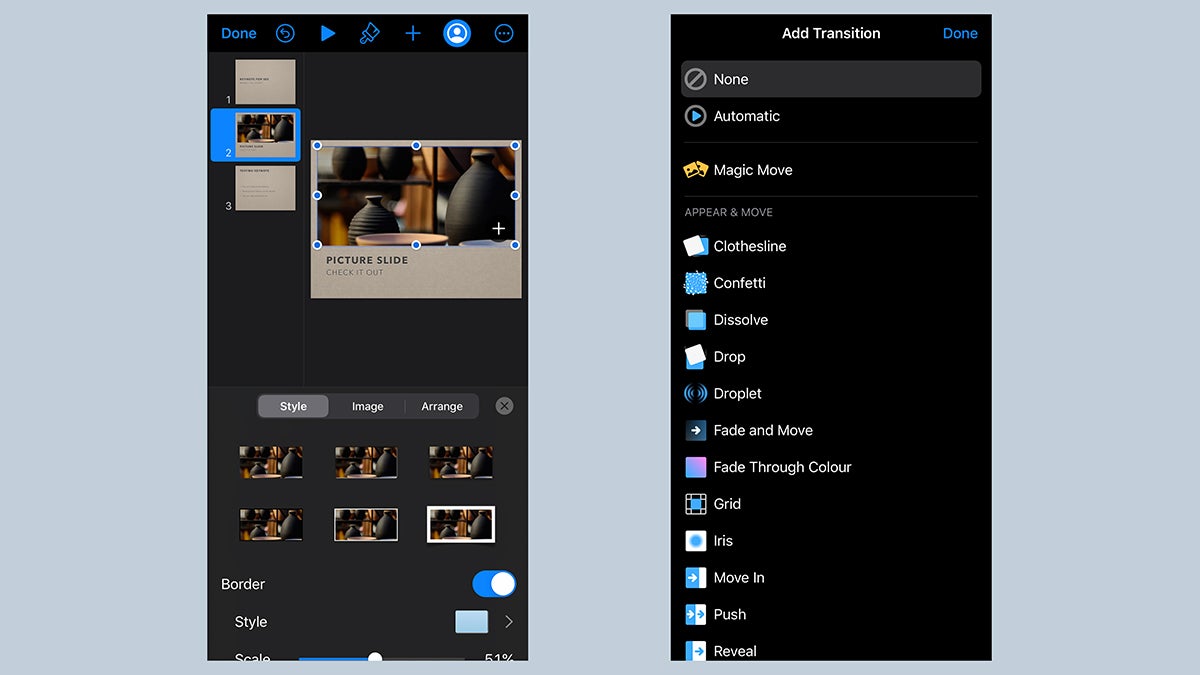 When it comes to answering the question of whether you can get serious work done on a phone, Pages, Numbers, and Keynote clearly show that you can – at least within the restrictions of using a small, portrait orientated display. Creating documents, spreadsheets, and presentations from scratch is no problem at all, and there’s a decent range of templates here to get you started too.

More than the Google or Microsoft apps, whether or not the Apple suite is right for you really depends on other factors besides the apps themselves: Do you use Android devices as well as iOS ones? Do you need to access your apps and files through a web browser? Is everyone else on your team using Microsoft Office? Answer those questions and you’ll have a better idea of which group of apps to pick.