The PS5 Won’t Be as Fast as the Next Xbox, But Sony’s Not Worried

On a live stream from PlayStation today, system architect Mark Cerny delivered a technical deep-dive on the upcoming PS5, covering everything from hardware components to architecture. There was a lot to unpack, but with Microsoft having just released the full technical specifications of its Xbox Series X, there was a lot to compare as well, especially where GPUs are concerned. Apparently, according to Sony, one of the biggest standard measurements for GPU performance doesn’t matter.

Like the next-gen Xbox, the PS5 will sport a custom AMD GPU based on AMD’s RDNA 2 architecture – and also like the Xbox Series X, it has hardware-accelerated ray tracing. From there, the console GPUs diverge a bit. For starters, while the next-gen Xbox has 12 TFLOPs, the PS5 comes in with 10.28 TFLOPs. TFLOPS, short for teraflops, are the average number of floating point calculations a device can do and knowing the number is intended to give your a rough idea of the kind of performance a device can do (more TFLOPS the better).

Cerny insists we shouldn’t get hung up on that number. He claims it’s not an accurate indicator of performance. We heard something similar when Microsoft talked about the Xbox Series X. Hardware-accelerated ray tracing outputs a much higher TFLOP equivalent, and GPU frequency also comes into play when taking the entire GPU performance into account.

He gave an example of 36 CU graphic cores (which is the number of RDNA 2 cores inside the PS5's custom GPU) running at 1GHz compared to theoretical 48 CU running at 750MHz. Both will deliver the same amount of computer performance, but the GPU with less CU cores running at a higher frequency will always be faster. Compared to the next Xbox, which has 52 CUs at 1.825GHz, the PS5 has 36 CUs at with a frequency max of 2.23GHz, so theoretically the PS5 could be a bit faster when you take the entire GPU package into account. 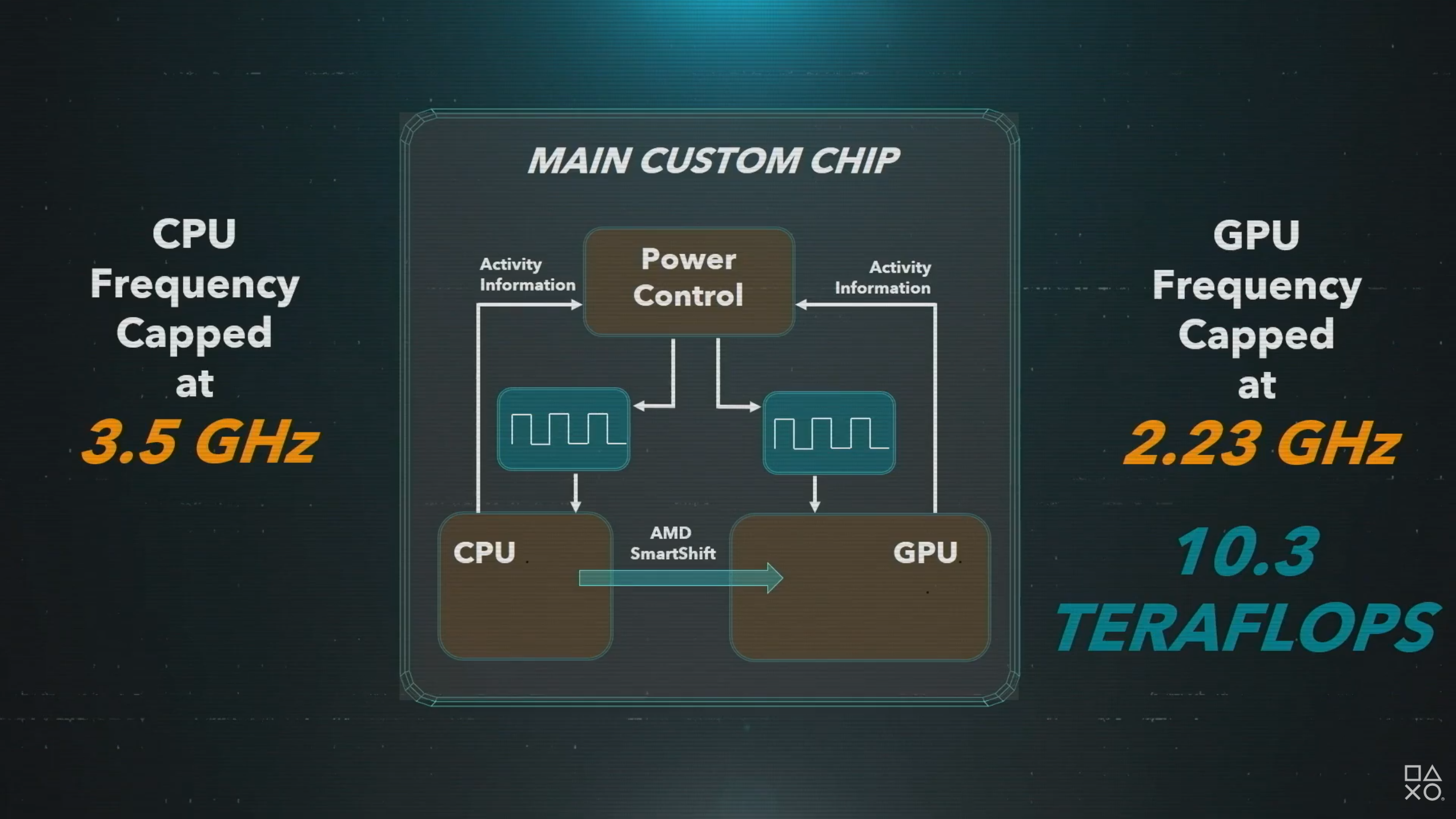 Just as an extra note, both consoles have CPUs with nearly identical specs. Both come with 8 Zen 2 cores (16 threads) built on AMD’s 7nm architecture, but the next-Xbox is clocked slightly higher at 3.8GHz (3.6GHz with SMT), where the PS5 delivers frequencies up to 3.5GHz. Again, that only translates into a minor difference in performance. Unless you’re comparing benchmarks, you shouldn’t notice any difference with your own eye.

Other than GPU specs, Sony also focused on the inclusion of an SSD for the first time in one of its consoles. A lot. According to Cerny, solid-state storage was the number one most requested feature from developers, and those developers got what they wanted in the form of a custom 825GB SSD, which is a weird number compared to consumer SSD sizes of 256GB, 512GB, or 1TB. “Many SSDs in the market today are available in sizes that are not based on powers of 2 or multiples of 8, as was the case with traditional HDD and earlier SSDs,” Greg Schulz of Storage IO told Gizmodo. “Today’s SSDs including those using NAND flash, Storage Class Memories (SCM) such as 3D XPoint, Intel Optane and Everspin among others, can be packaged in non-standard capacity sizes.”

Sony designed its own flash-based SSD to be as efficient as possible with a 12-channel interface and a controller that hooks up to a PCI Express 4.0 interconnect. “That’s pretty much the norm and would indicate that the PS5 is probably using a PCIe NVMe M.2 825GB SSD similar to what can be found in many laptops and tablets among other devices,” Schulz said. Cerny did confirm that you will be able to add a commercial M.2 drive to the PS5 to expand storage space, but it has to be compatible. PS5 doesn’t have information on that right now, but will likely have it after its planned holiday 2020 launch.

Combined with support for ZLIB (a software library used for data compression) and RAD Game Tools’ Kraken format, Cerny says that the PS5's SSD can hit read speeds of 5.5GB/s, which is the equivalent or near-equivalent of consumer SSDs like the WD Blue 3D M.2 SSD, which can hit up to 6Gb/s.

All that translates into “No installs as you know them today,” said Cerny, which I imagine means no longer staring at an update or download screen for what feels like forever. The last piece of the PS5 puzzle is Sony’s custom engine 3D audio, which you can apparently fine-tune to your own individual ears. In what it calls Head-related Transfer Function (HRTF), Sony’s goal is to simulate individual sounds at different times as they happen around you with the Tempest Engine (which is a re-engineered AMD GPU compute unit), in kind of the same way you’d hear individual rain drops in the real world, for instance. This involves measuring your individual ear shape and the shape and size of your head to make the sounds be as real and as immersive as possible.

However, the technology is complicated. While we might see the tech included with the PS5, its still tech that’s in development, so we probably won’t see the extent of what it can do when the PS5 launches. And the same might be true of backwards compatibility. Sony has confirmed the PS5 will support over 400 PS4 titles at launch, but there’s no word on titles for the PS3 or earlier.

In any case, the PS5 looks like a fierce competition for the Xbox Series X. Both Sony and Microsoft still have not revealed all about the next generation of consoles, but both are clearly evolving the consoles to be more PC-like while implementing new, custom tech.