These Award-Winning Wildlife Photos Will Calm Your Stressed Spirits

Right now, just about everything feels awful. A pandemic is ongoing. People are self-isolating at home to prevent the novel coronavirus from spreading further. Businesses are closed, leaving countless workers without employment. And to top it all off, the climate crisis continues to threaten humanity’s existence.

Well, let’s put all that aside just for a little while and check out some newly announced award-winning photography. Nature TTL, an online resource for photographers to build skills, announced the winners for its annual photography competition today. Categories include wildlife, landscape, macro, and young photographers.

The overall winner was Florian Ledoux from France, who used a drone to capture some seals in Antarctica chilling on a slate of ice. Surrounded by broken pieces of floating ice, the grey seals offer a stark contrast to the white and blue throughout the image. It’s a stunning photo that highlights both the impending risk of Antarctica melting and the region’s resilient creatures living their lives.

However, this photo is far from the amazing shot the competition offered. Among the 7,000 entries from 117 different countries, only five photos walked away as winners. And they all have something to teach us in this trying moment about the natural world around us and our innate ability as creatures of this Earth to thrive despite the chaos around us.

So take a deep breath, and take it all in.

“Above the Crabeater Seals” by Florian Ledoux

This image won Ledoux photographer of the year and won in the wildlife category. It’s not hard to see why from the contrasting colours to the contrast in vibe between the sated seals and blood-stained ice left behind by the meal they just enjoyed. The French photographer used a drone to capture the image but was sure to tell Nature TTL that drone operators should be careful when filming wildlife. These creatures can be easily spooked, and disturbing them can cause them to lose much-needed fat stores that help them survive in such a harsh environment.

“For me, it is very important to show the state of the Arctic and Antarctic regions and to have an image from there win this award is important exposure,” said Ledoux in a Nature TTL statement.

The great white pelican’s beak is perfect for seizing prey. However, this black fish – a non-native to a pond in Singapore’s Jurong Bird Park where photographer Robert Ferguson shot the image – was not willing to go down without a fight.

Ferguson watched the pelican struggle for more than 20 minutes to eat its prey. The large fish would extend the sharp spines from its fins, preventing the bird from swallowing it. Smart move, friend. Smart move.

Did the pelican succeed? Who knows. Ferguson doesn’t offer any closure in the details of his award-winning photo. What he does offer is a close-up glimpse at the struggle between predator and prey.

The long shadows sheltering a flock of sheep from the sun is a mood. Photographer Marek Biegalski took this photo during the autumn in Tuscany. The image offers a nice palette of autumn colours with the bright white of the sheep to guide the eye.

I think we can all relate to these woolly bodies huddled closely in the shade as we all yearn for a feeling of togetherness during these times of social distancing. 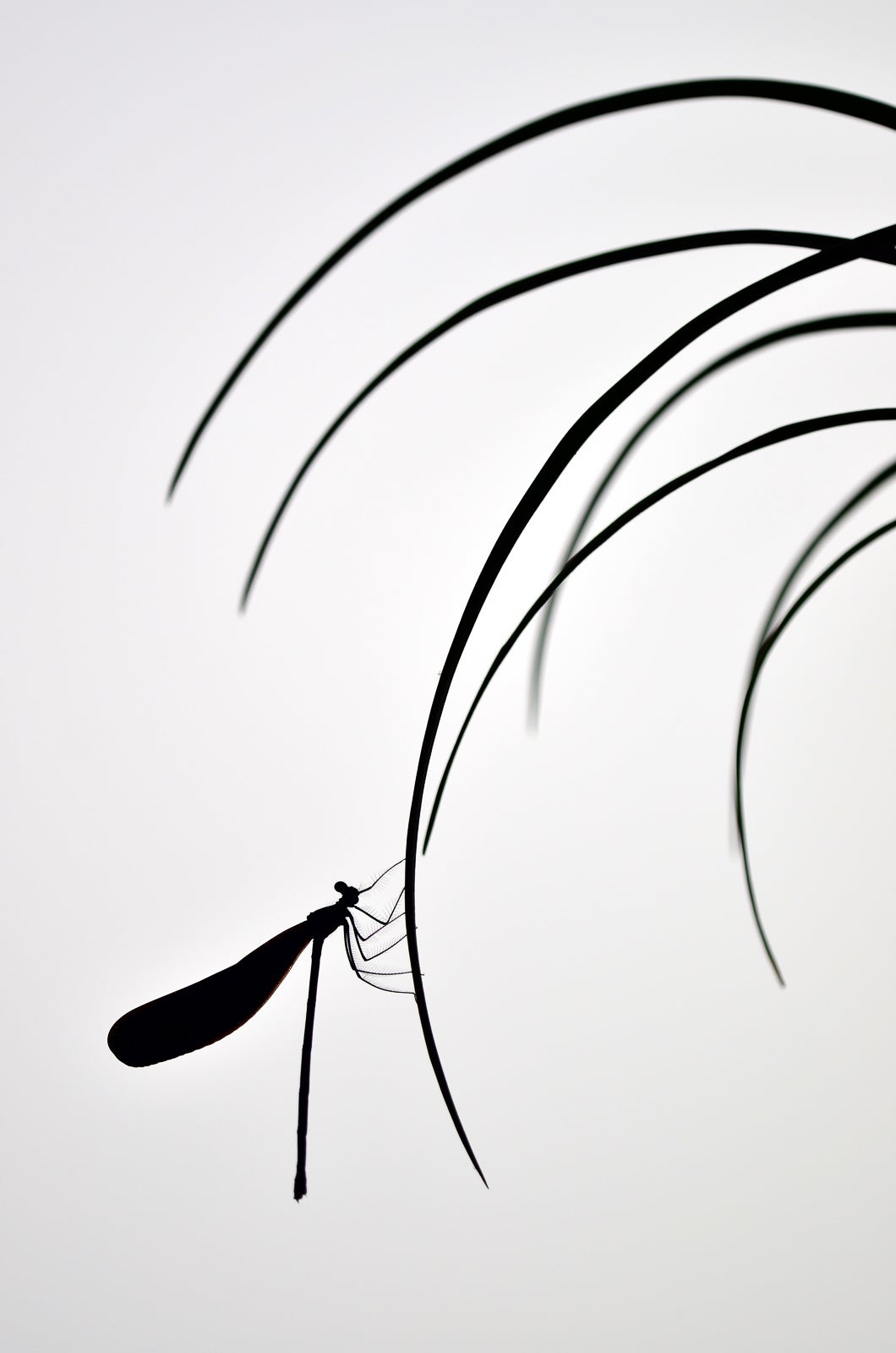 Look, I’m no fan of creepy crawlers, but even I can appreciate the black-and-white minimalism of this photo. It radiates a sense of peace, which is in line with the simplicity photographer Minghui Yuan was trying to communicate.

“Against the background of the sky, I discovered the connection between the lines of the grass and the subject,” he said. “Nature itself is a simple painting.”

The bug is a damselfly, which was flying around a stream on Dabie Mountain in central China. This one, in particular, was awaiting a female fly to come by its turf and chased away another male before landing on this sliver of grass. What an elegant love story.

The photo above is especially exciting since this award goes to photographers younger than 16. Saptarshi Gayen took it away with this careful presentation of the black drongo, a small songbird, hunting for the insects brought out by the fire in an Indian grassland.

At the end of winter, farmers in India set brushland ablaze to prepare for the next season’s harvest. It’s an air pollution nightmare for the region at-large, but Gayen used this moment to show the intricacies of how wildlife reacts to the flames. While the insects flee in fear, the drongo soars in, ready for its next big meal.

We can all take some lessons away from the black drongo. Stay brave. Stay fearless. Most importantly, stay snacking!