Despite looking like a miniaturised clone of Nintendo’s Switch Lite, the Powkiddy Q90 lacks the power needed to play nearly every game released in the past 25 years. Guess there’s something to be said about not judging a book – or a console – based on its cover. The Powkiddy Q90 is, however, a solid and cheap way to enjoy 8- and 16-bit games from the NES, SNES, and Sega era, even if it’s a little overpriced compared to the competition.

Note: A sample of the Powkiddy Q90 was provided to Gizmodo by online retailer Retromimi.

Over the past couple of months, we’ve been testing a series of new portable consoles from China powered by cheap mobile processors that are finally fast enough to properly emulate the classic consoles of yesteryear. Your smartphone is already capable of the same, but these handhelds don't cost anything close to £1,000. But whereas the $65 (£52) New Pocket Go and $74 (£59) Anbernic Retro Game 350 swing for the fences and are capable of emulating 3D games from the original PlayStation era, the cheaper Powkiddy Q90 mostly maxes out its capabilities with Super Nintendo and Sega Genesis titles. If you can live with that, you’ll save yourself a few bucks, and a bit of space in your pocket.

What is it?: A handheld gaming console capable of playing retro 8- and 16-bit titles through emulation.

Like: By copying Nintendo's hardware, it's one of the more aesthetically pleasing handheld emulators you can buy.

Dislike: Includes an analog stick, but it's stiff and awkward to use, and finding games that actually take advantage of it is a challenge.

The Q90 is powered by the Allwinner F1C100S running an ARM926-EJS processor with 32MB of RAM at its disposal. That is considerably less than handhelds like the RG350, which come with half a gig of RAM. At this point, the Allwinner F1C100S is considered last-generation hardware. As a result, it limits what the Powkiddy Q90 is capable of. Like the RG350 and the New Pocket Go, it does include a built-in emulator for the original PlayStation, but the performance makes it nearly unplayable, with frame rates that stutter along and music and sound effects that are completely out of sync with what’s happening on screen. If PS1 support is important to you, the RG350 is the way you’ll want to go instead.

What the Powkiddy Q90 delivers is solid performance for games from consoles that pre-date the original PlayStation. NES, Sega, SNES, Genesis, Game Boy, GBA, Game Gear, and even the Neo Geo Pocket are among the many consoles the Q90 can emulate properly, but performance will vary from game to game depending on their demand for processing power. Whereas handhelds like the RG350 handle these classic systems flawlessly, I did find the occasional 16-bit title (that I already own) would exhibit performance artefacts like screen tearing, dropped frames, and issues with audio syncing.

The emulators that come pre-installed on the Q90 each include options in their individual settings for tweaking the performance of a given title, and while console gamers are used to games just working on their machines, these kinds of workarounds are common when it comes to emulation and one of many reasons devices like the Powkiddy Q90 cost just $50. 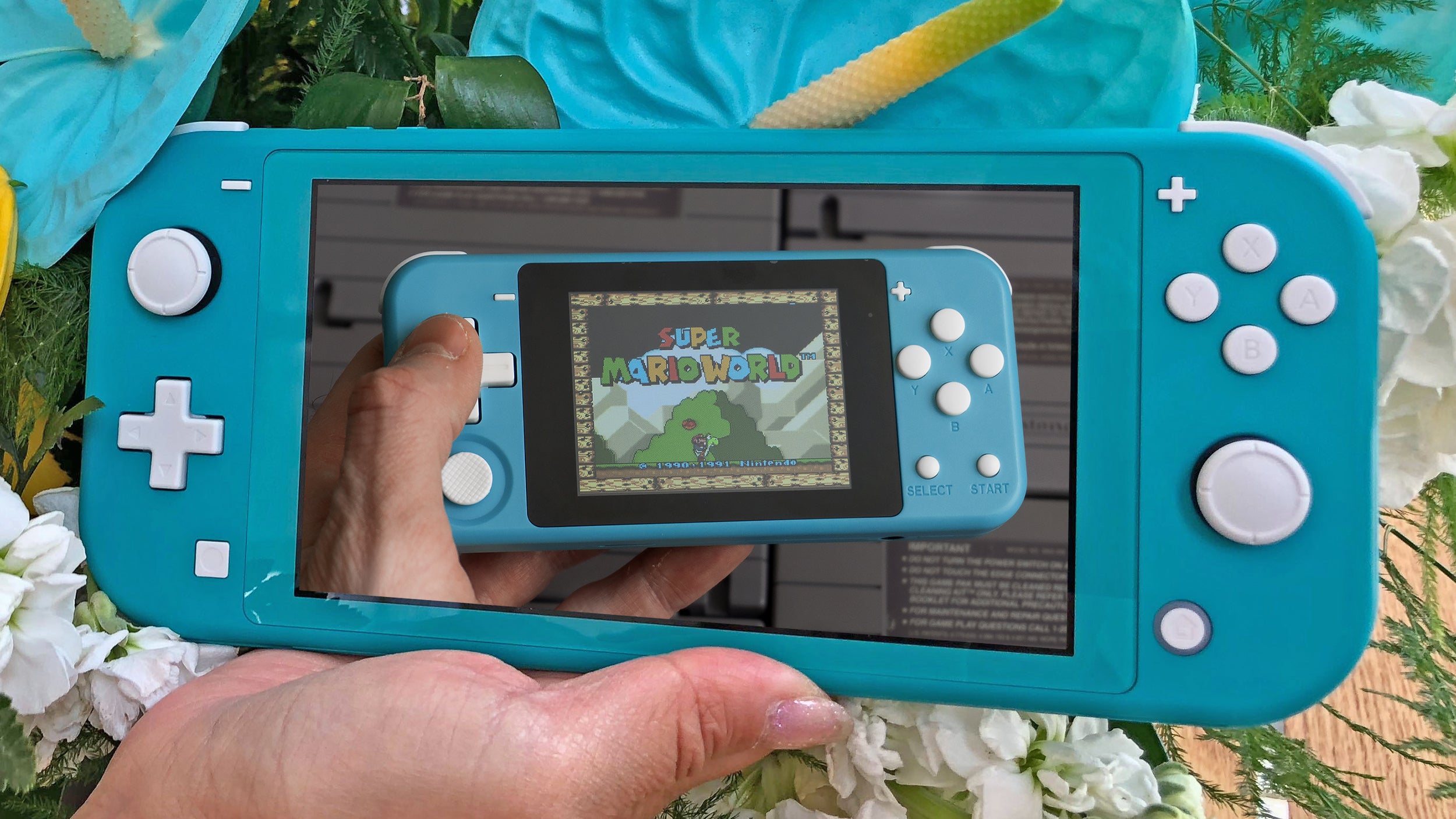 There’s no denying where the makers of the Powkiddy Q90 drew their design inspiration from for the tiny console. (Photo: Heather Alexandra/Kotaku, Andrew Liszewski/Gizmodo)

The Powkiddy Q90 might not rank amongst its competition as the most powerful or most capable handheld emulator to come out of China, but it is one of the nicer looking pieces of hardware we’ve tested. I’m sure its creators will deny ever having even seen the Switch Lite, but it’s hard to imagine Nintendo’s latest portable didn’t strongly inspire the Q90's minimalist design. Even its colour is a near-identical match to the turquoise Switch Lite, although the Q90 is also available with a clear shell if you prefer.

The Powkiddy Q90 includes a single microSD slot for loading games, and properly positions the headphone jack on the underside of the console. (Photo: Andrew Liszewski/Gizmodo)

The Q90's action buttons feel great, and the inclusion of the + and - buttons on either side of the screen make accessing each emulator’s sub-menus much easier than on other handhelds. (Photo: Andrew Liszewski/Gizmodo)

If even a low-cost handheld emulator out of China can include a USB-C port for charging, there is no excuse for any other company to still be relying on microUSB. (Photo: Andrew Liszewski/Gizmodo)

From left to right, a size comparison of the RG350, the Game Boy Advance, the Powkiddy Q90, and the PocketGo. (Photo: Andrew Liszewski/Gizmodo)

The directional pad on the Q90 feels excellent, with just the right amount of squish you’d want for playing retro games, as do the action buttons on the other side. The Select and Start buttons are positioned right next to each other, as they always should be, and on either side of the Q90's 3-inch, 320x240-pixel LCD display you’ll find ‘+’ and ‘-’ buttons (another design feature presumably borrowed from the Switch Lite) which provide quick access to the settings menus of the various software emulators included with the handheld.

On top, you’ll find a USB-C port for charging the Q90; on the side is an analog volume dial, which I tend to prefer over a pair of up and down buttons; and on the bottom is a microSD card slot for expanding the 16GB of internal storage. You’ll also find the Q90's headphone jack properly located on the bottom edge of the console, where it always should be on a handheld device. 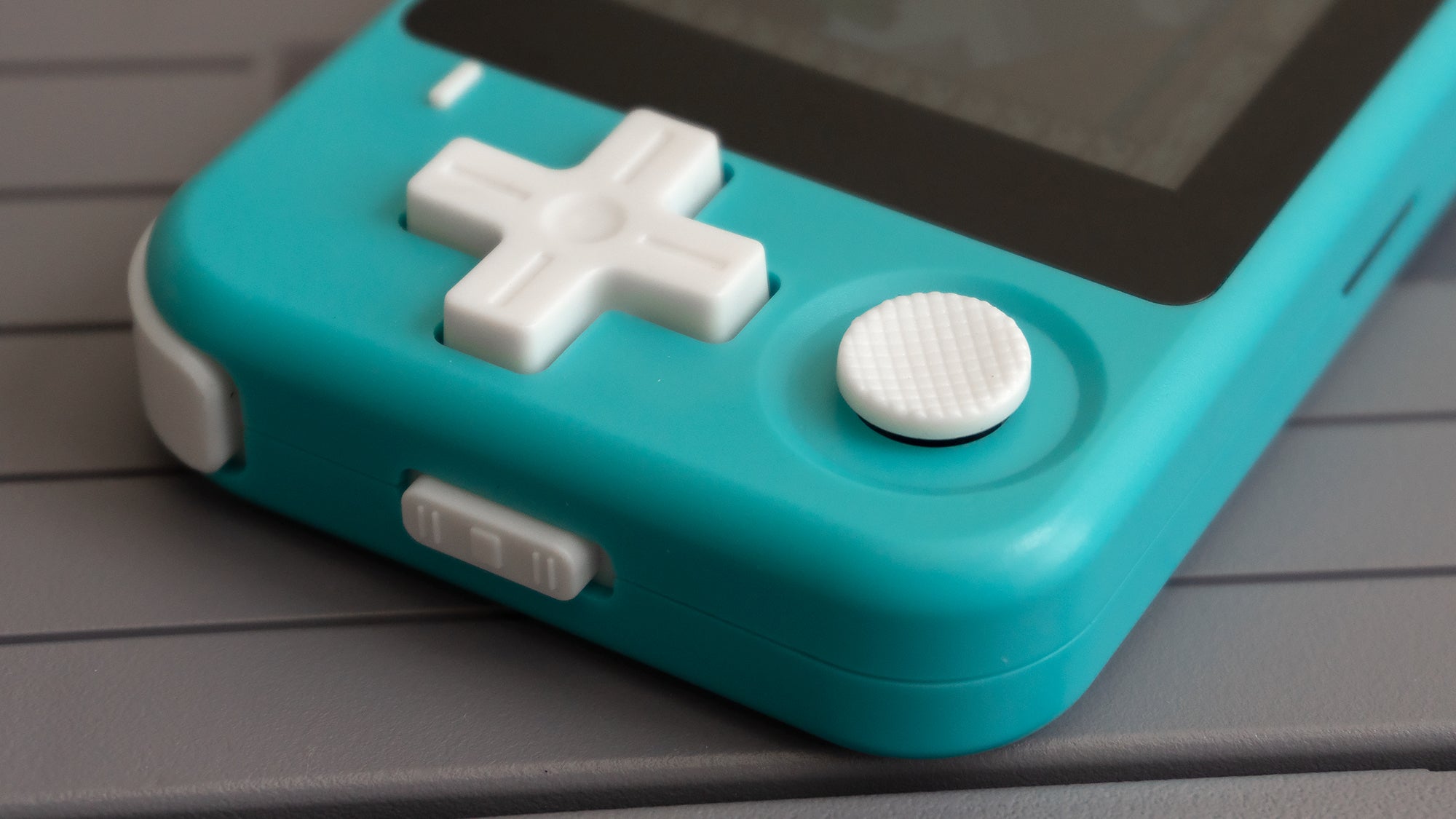 The Q90's analog joystick is better than the one found on the New Pocket Go, but not by much. It’s still a little too stiff to comfortably use, and the smooth plastic makes it easy for your thumb to slip off. (Photo: Andrew Liszewski/Gizmodo)

The all-white buttons are a pleasing design choice, and I’m going to throw in some bonus points for the lack of branding on the bezel beneath the screen. I don’t need to be constantly distracted by a company’s name (especially a name as uncommon as Powkiddy) while trying to focus on a game. Even the overall build quality of the Q90 is excellent, which leaves me confused as to why its creators included an analog joystick that’s nearly unusable. Its sliding design means it sits nearly flush to the console so that the Q90 is more pocket-friendly, but the stick is stiff, small, and made of a smooth plastic that guarantees your thumb will slip off every few seconds. It’s a frustrating addition that seems like it’s only there so it can be mentioned in a feature list. But, given you’ll mostly be playing 2D titles, you can just ignore its existence and stick with the excellent D-pad. 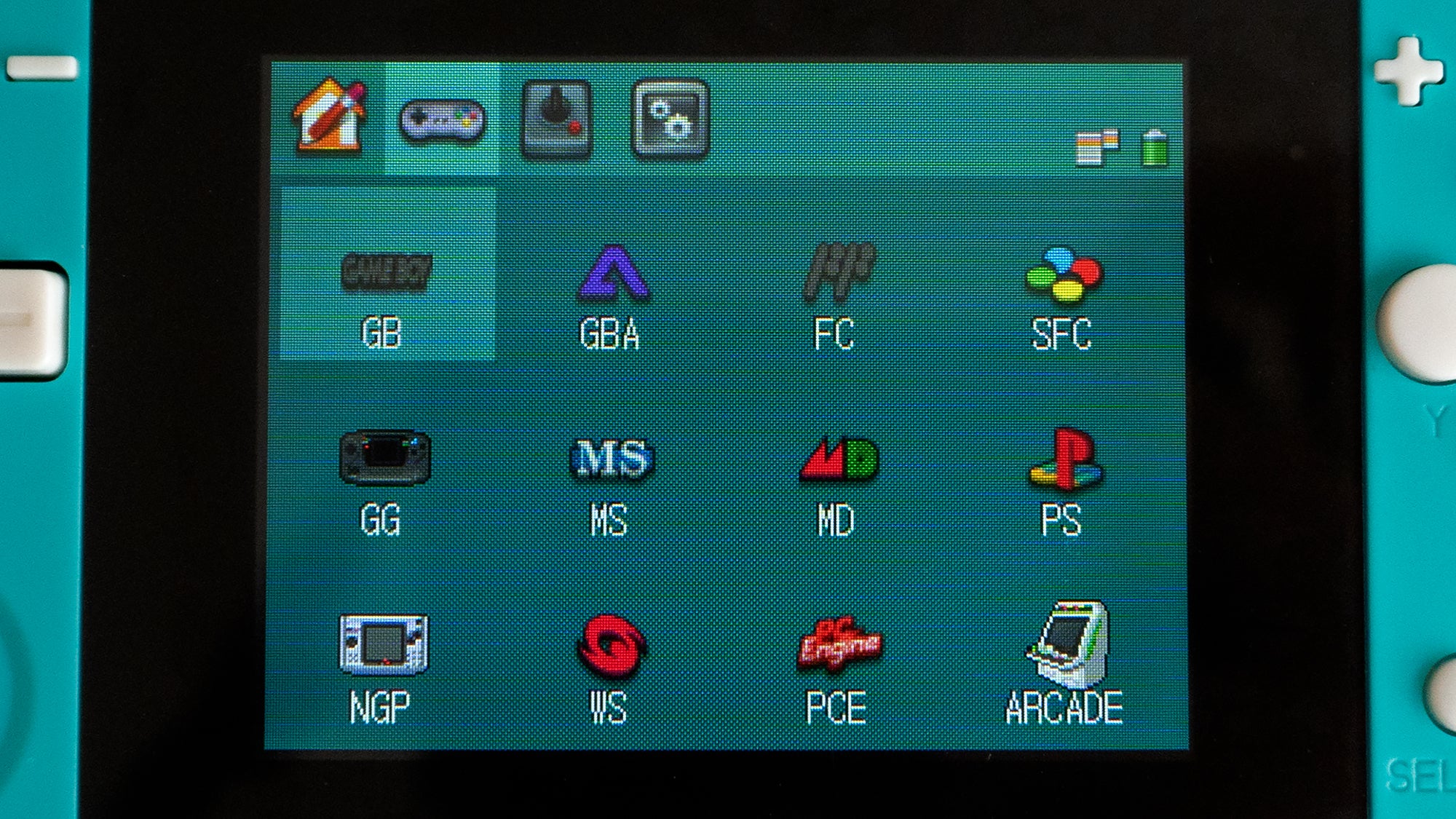 The Powkiddy Q90's operating system is ugly, but functional, and won’t take you much time to find your way around it. (Photo: Andrew Liszewski/Gizmodo)

Navigating the Powkiddy Q90's operating system and user interface is when you really start to understand why these devices are so affordable. The companies behind them aren’t dumping millions of dollars into developing beautiful user-friendly front-ends. Like the RG350 and the New Pocket Go, the Q90, which runs the Linux-based NXHope OS, features an ugly but functional front-end. It won’t take you much time to find your way around or locate the emulator you want to launch, but you won’t enjoy the learning process along the way. But because a lot of these devices are all running the same open-source hardware internally, there are third-party OS alternatives you can install that look a lot nicer, although software upgrades require you to be comfortable with dealing with concepts like partitions and writing ISO or IMG files to a memory card.

And as we’ve pointed out in prior reviews, a handheld emulator like the Powkiddy Q90 is all but useless without access to games preloaded onto a memory card as ROM files. This is a legal grey area, as we’ve explained many times before. If you’re not comfortable with the steps needed to locate these types of files and get them onto the Q90, then you might be better off sticking with handheld devices like the real Nintendo Switch Lite. 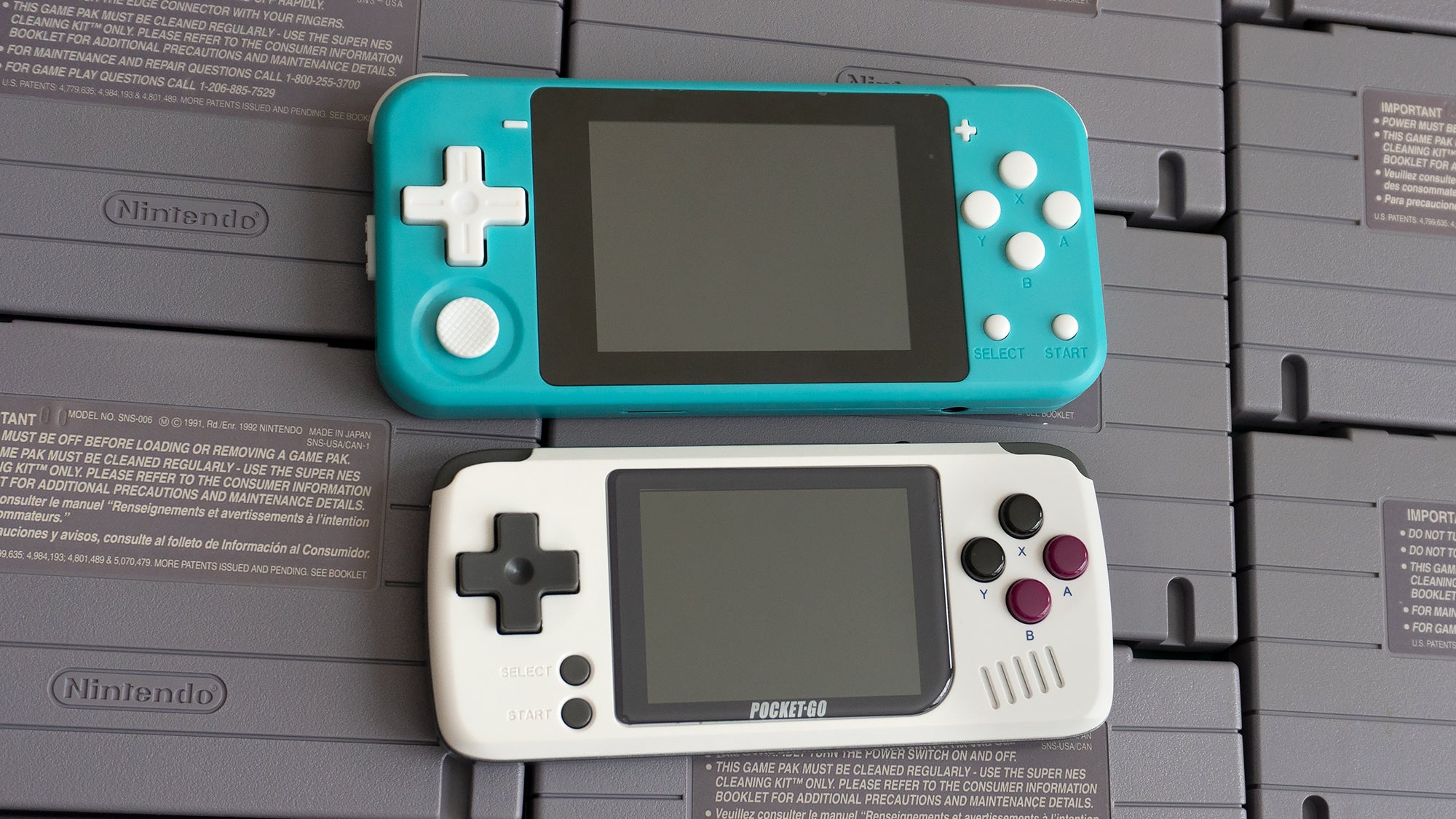 If a larger screen is important to you, the Powkiddy Q90 is a great option at $50. But the Bittboy Pocket-Go offers the same functionality in a smaller size for just $33 (£26). (Photo: Andrew Liszewski/Gizmodo)

Do I recommend the Powkiddy Q90? Yes and no. At $50, it’s cheaper than the RG350 and the New Pocket Go if you’re mostly interested in emulating 8- and 16-bit games, but at $50, it does feel a little overpriced. The closest alternative to the Q9o is the Bittboy Pocket-Go, which uses the same processor but has a smaller, 2.4-inch screen and skips the analog joystick altogether. It’s also $17 cheaper than the Q90 as a result, while still playing all the same games. I do think the Q90 offers better usability overall, even with the inclusion of a joystick that’s nearly unusable, but at $33, the Pocket-Go is the better deal if you can’t find the Q90 at a cheaper price.