Nintendo’s Switch might not be the top console choice for fans of fighting games, but with titles like Street Fighter, Mortal Kombat, and Super Smash Bros. available, it’s no slouch either. If fighting games get more screen time on your Switch than Zelda does, this miniature arcade stick controller might be a worthy upgrade.

One of the Switch’s biggest drawbacks when it comes to fighting games is its lack of a true four-way directional pad. In its place are four action buttons on the left Joy-Con, which allow the tiny gamepads to be removed and used as independent gamepads. It’s a design trade-off that can be resolved with Nintendo’s optional Pro Controller accessory, or 8BitDo’s excellent and highly customisable SN30 Pro+, but neither are preferred solutions amongst those who are truly devoted to video game fisticuffs.

Games like Street Fighter and Mortal Kombat started life decades ago in video game arcades, introduced on stand up cabinets featuring joysticks and action buttons much larger than what you’ll find on the Switch. Arcades have long since gone mostly extinct, but there’s still an entire accessories market dedicated to creating third-party controllers that emulate the arcade experience. 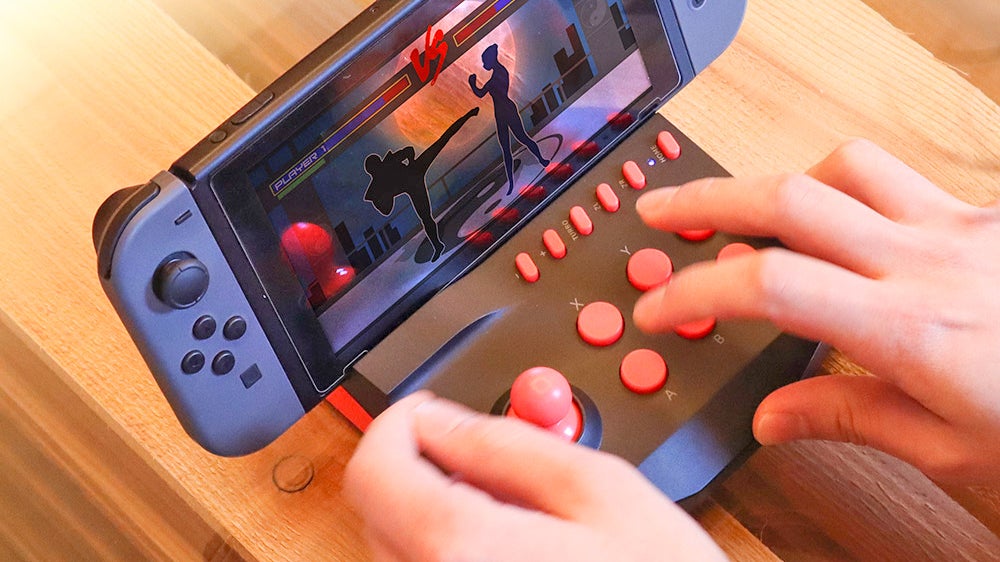 Thanko’s new Arcade Controller Mini appears to walk the line between fully emulating the fighting game arcade experience, and preserving the extreme portability of the Nintendo Switch, which is why many gamers bought the console in the first place. Serving as a stand and charging dock as well, the Arcade Controller Mini includes a larger joystick than what you’ll find on the Switch Joy-Cons, and a six-button layout that moves the left and right shoulder buttons next to the A, B, X, and Y action buttons. And because it connects to the console through the Switch’s physical USB-C connection, any delays introduced through wireless connectivity should be eliminated.

The Switch’s other buttons, including + and -, Home, and the left and right trigger buttons, have been relegated to a strip of tiny buttons sitting along the top of the Arcade Controller Mini, where you’ll also find a Turbo button that can be used with retro games that don’t offer rapid-fire as an official in-game option. At 4,890 yen (£39) it’s cheaper than Nintendo and 8Bitdo’s solutions, but the unique button layout does limit the playability of other games while this accessory is attached, so it’s not ideal for everyone.