Animal Crossing couldn’t have come at a better time, but not everybody has an island. Some folks may be curious to try gaming for the first time or are looking for games more focused on story and characters than combat options. For those wanting to feel like they’re playing through a wonderful sci-fi movie or a fantasy novel, we’ve got some great picks right here.

Here is a list of 10 environmental narrative and adventure exploration games that feature complex stories and compelling characters. Some of the games dive into tricky subjects, like death and economic instability, so I’d keep that in mind if there are topics you’re trying to avoid during the pandemic. I did leave out games that hit too close to home (I’m looking at you, Everybody’s Gone to the Rapture).

Be sure to let us know in the comments which games you’re playing right now to get through the pandemic. I just finished a replay of Child of Light (one of the featured games) and I’m getting back into Marvel’s Spider-Man. However, I fully plan on stopping before that whole, well, you remember what happens. 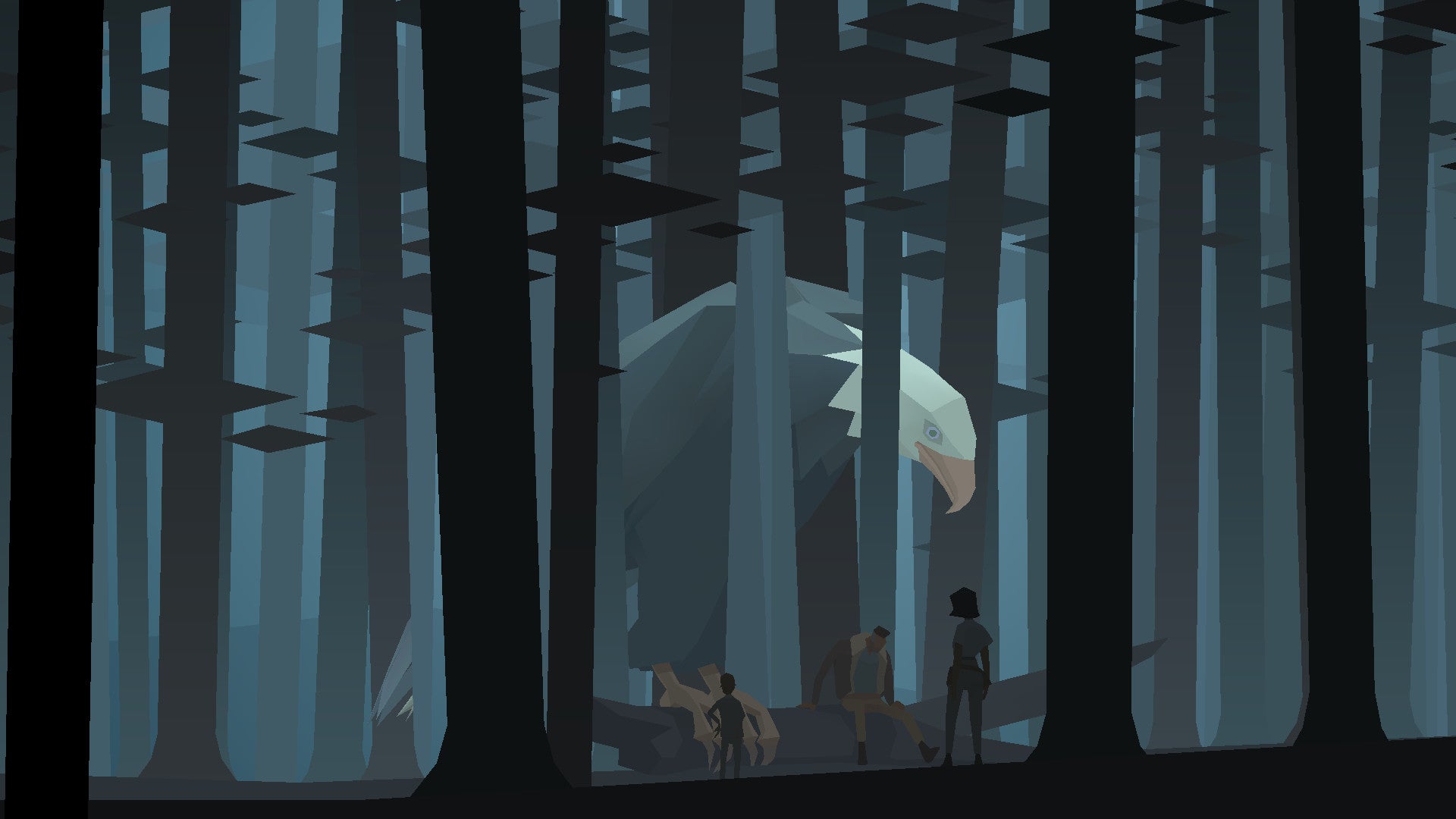 One of many surreal scenes from Kentucky Route Zero. Image: Cardboard Computer

I don’t think a video game has affected me as much as Kentucky Route Zero in a long time (the other is at the bottom of this list). This five-part episodic game is, to be honest, too hard to explain. It plays like reading a story – a complex, unstable, and turbulent story with multiple unreliable narrators and an ending that somehow brings it all back to uneasy normality. It comes across like a mix between Twin Peaks, Welcome to Night Vale and an existential crisis. This game isn’t always pleasant but it still manages to lift you off the ground. It’s an experience you’ll never forget. 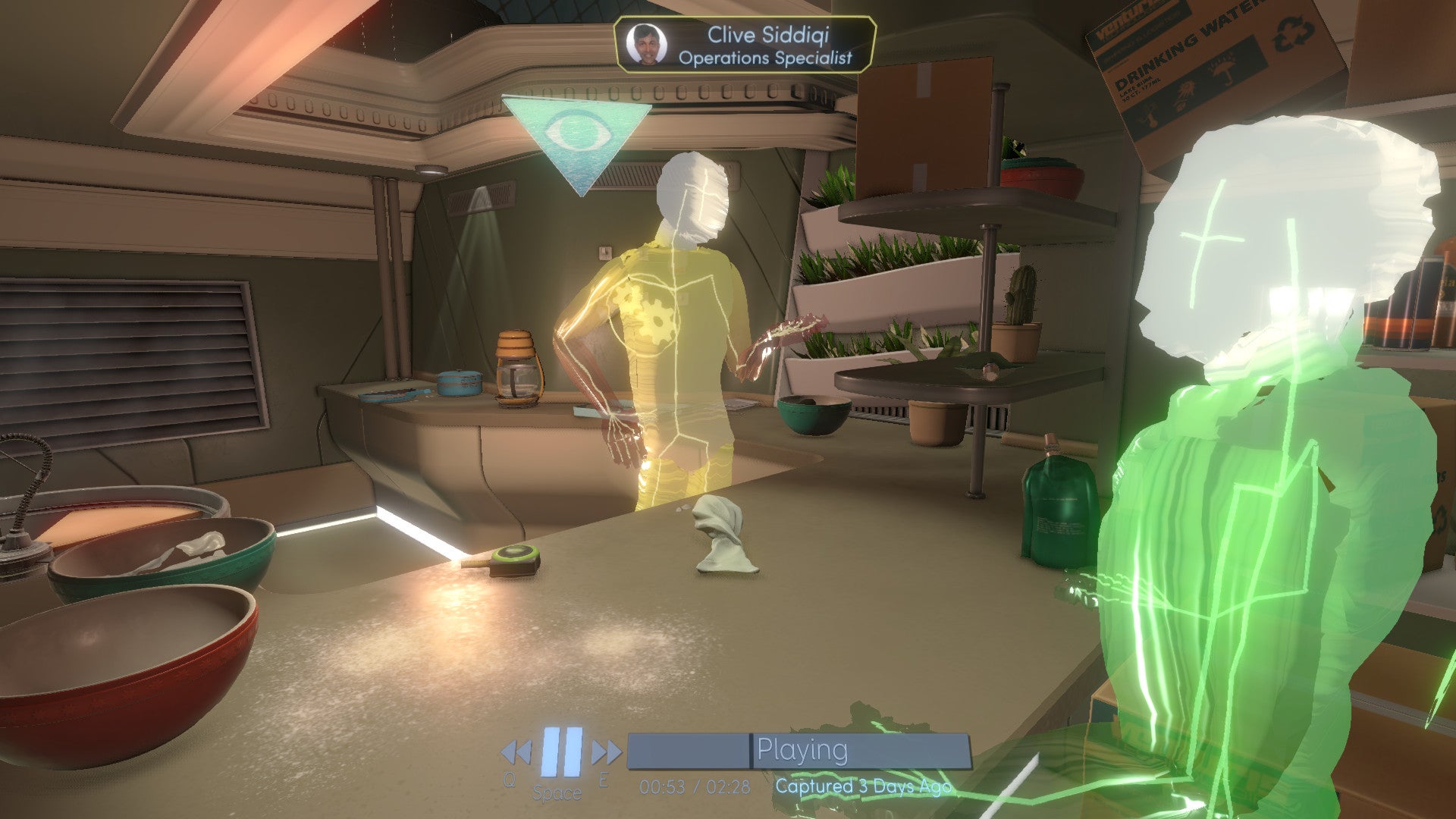 Tacoma was the Fullbright Company’s follow-up to its exciting debut, Gone Home, which I’d also highly recommend. This one didn’t strike as strong a chord with players, but I still found it to be an enjoyable two-hour game with plenty of layers to unwrap. It’s about a space explorer who’s been tasked by a corporation with investigating one of its ships, whose crew seemingly vanished without a trace. You piece together the chats and choices of the crew, getting a picture of their lives through video logs and secrets. It’s not a horror game, so you don’t have to worry about jump scares as you explore the empty ship. 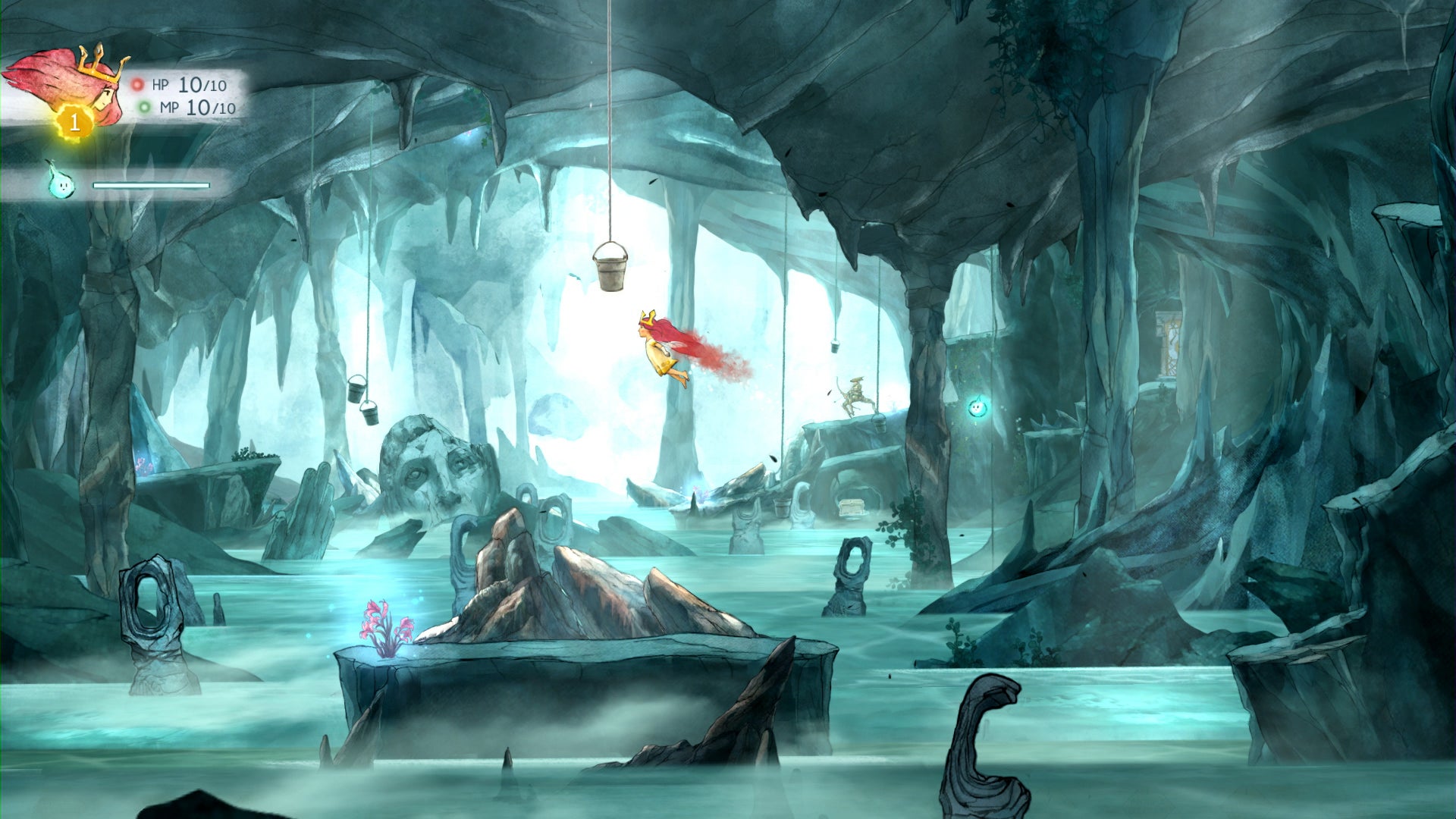 The flying mechanics in this game are something else. Image: Ubisoft Montreal

This side-scroller is great for people who grew up with turn-based RPGs and want something that rekindles that experience with a bit of a challenge. It also features some gorgeous visuals and music. Child of Light is about a young princess named Aurora who finds herself in the magical land of Lemuria, which she has a heretofore unknown connection to. Graced with the gift of flight – thanks to a fantastic gaming mechanic that uses every inch of the screen – Aurora travels the land to stop a curse and save both her kingdoms. The game also comes with a limited two-player co-op mode, as the second person can play a magical light that aids Aurora as she explores and fights. 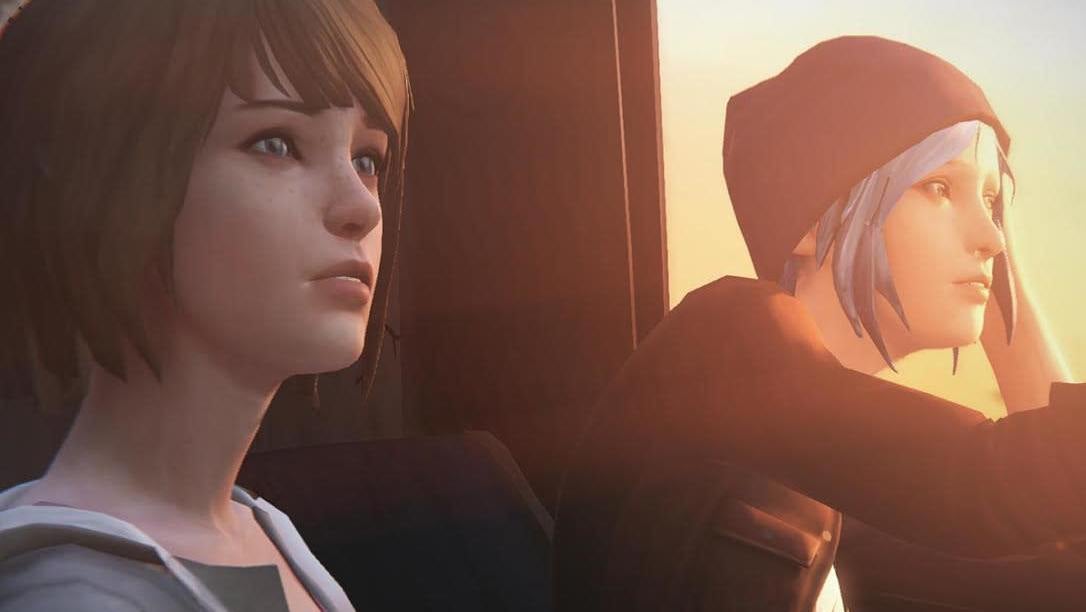 Max and Chloe spend some time together. Image: Square Enix

Otherwise known as Humanity: The Game. Life Is Strange is about a teenage photographer named Max who attends a prestigious high school for gifted students. She discovers she has the ability to control time which lets her change the past and influence the future. What’s great about this episodic story is how well it balances the normal and paranormal. Max’s studies, anxieties and relationships with her friends and family – particularly her best friend Chloe – drive the story just as much as her time powers. There’s also a prequel game that centres on Chloe and a sequel about two brothers, one of whom has the power of levitation. They’re all great, but the first one is definitely the best. 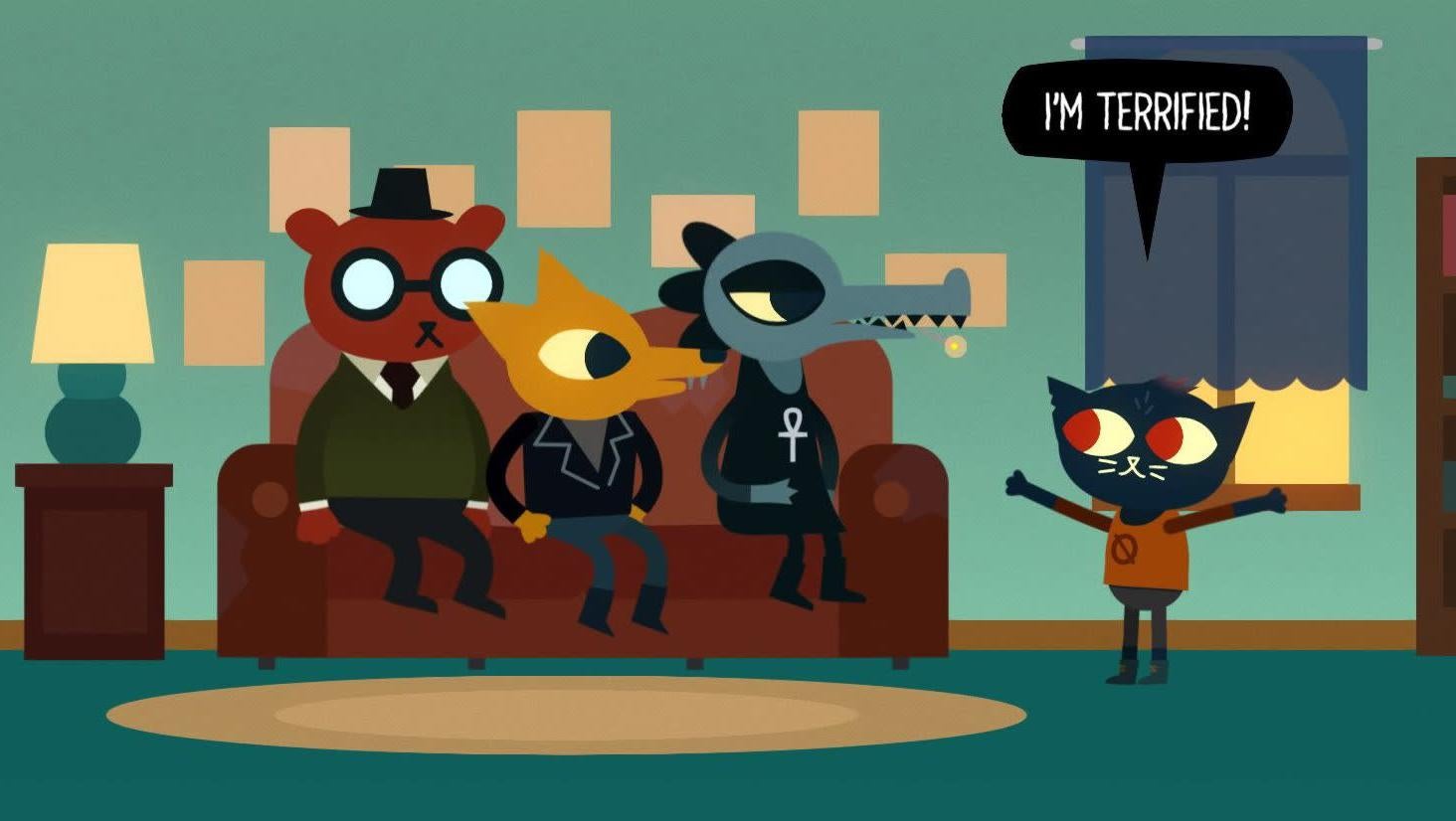 Night in the Woods

Mae Borowski is all of us right now. Night in the Woods is a side-scrolling platform game that takes place in a world filled with anthropomorphised animals. Mae is a young cat who’s just dropped out of university and returns to her small town. As she rekindles her friendships with people who can’t understand why she returned to the place they all dream of one day escaping, a dark conspiracy threatens them, the town and everything they hold dear. It’s a great game that explores class conflict, interpersonal strife and mental health. I love games where whole days can go by and nothing happens except the intricacies of life. 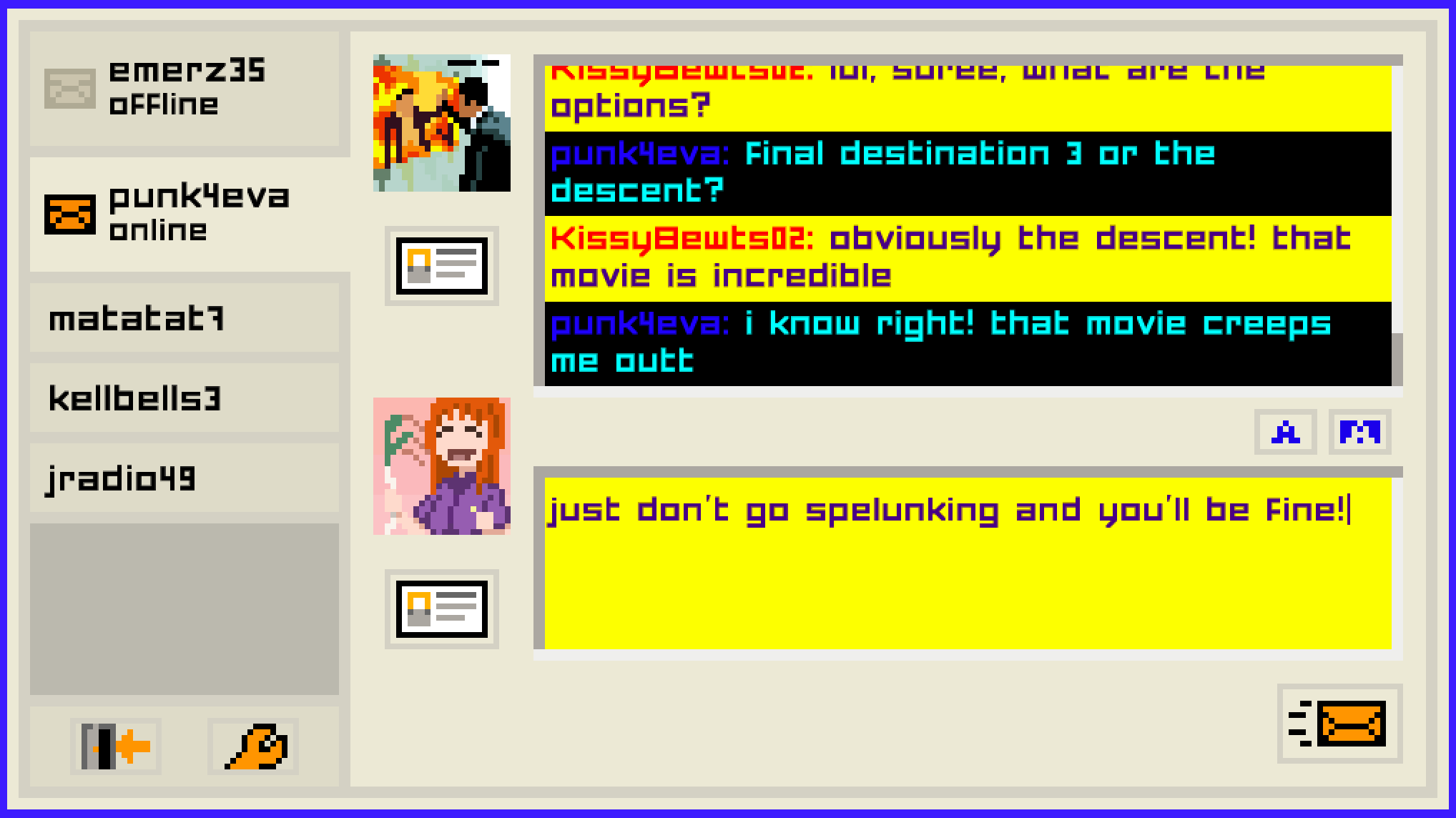 Players can customise their profile pics and usernames. Yes, I am now KissyBewts02. Image: Kyle Seeley

Emily Is Away Too

Emily Is Away Too is the spiritual successor to Emily Is Away, a free indie game that came out about five years ago. Recreating the look and feel of AOL Instant Messanger chats, it has the player navigate relationships with a few of their close friends during the last year of high school. Nothing out of the ordinary happens, but it’s the kind of game where small choices can have a big impact. It’s a great one to two-hour game that feels like a trip back to a time when we were still figuring out who we were meant to be. Another version set in the early days of Facebook is in the works, but a release date hasn’t been announced. 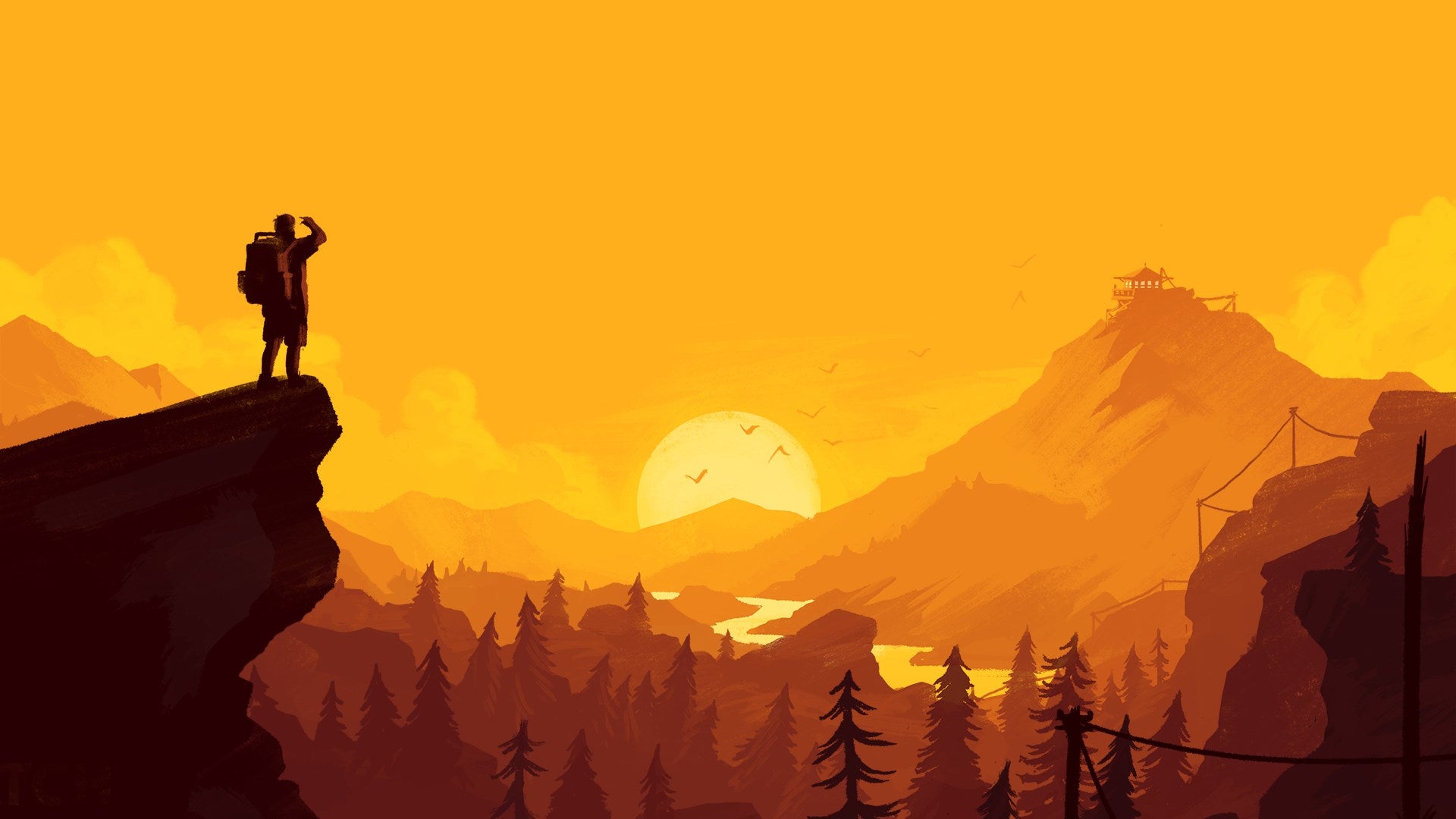 Firewatch gives you the ultimate social distancing fantasy: being outside. Image: Campo Santo

Right now, most of us would do just about anything to be able to go outside and get lost in the woods – in Firewatch, that’s exactly what happens. The story is about a man named Henry who’s taken a job as a fire lookout in a national forest. He spends his days hiking the trails, sorting through the past few years of his life while chatting with his fellow lookout, Delilah, who’s stationed in another part of the woods. Henry starts uncovering strange clues about the goings-on in the area, leading him down a rabbit hole of paranoia that’s only enhanced by his social isolation and lingering trauma. 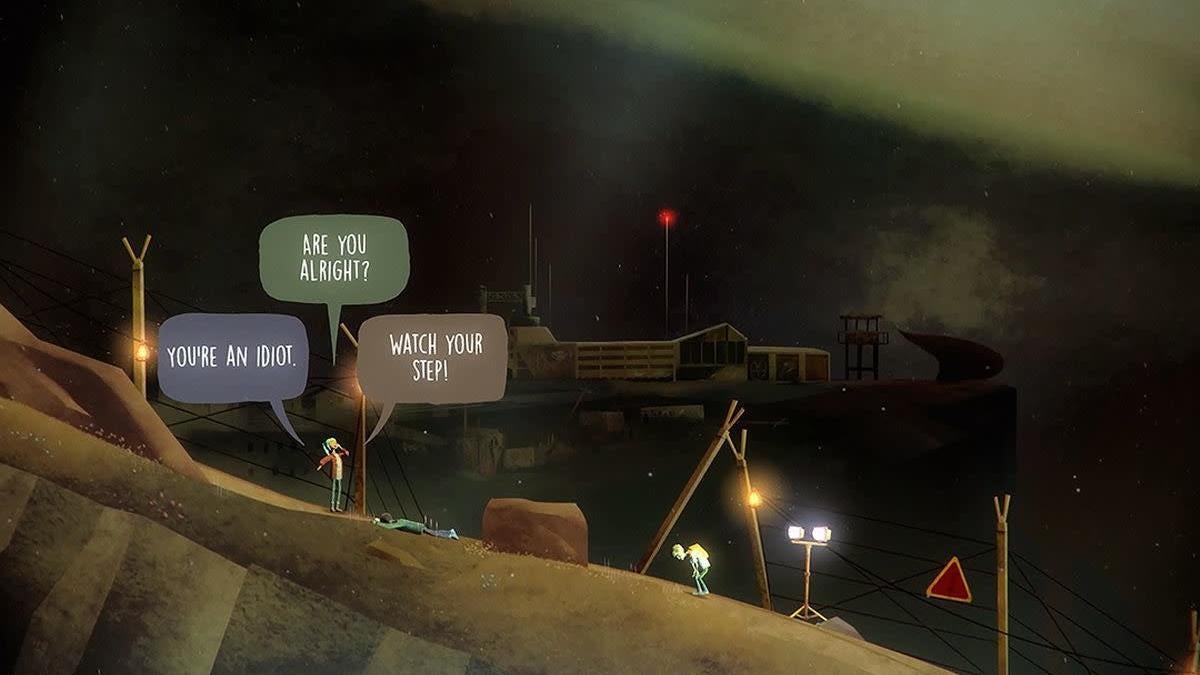 Oxenfree’s dialogue options have a bigger impact on the story than you might think. Image: Night School Studio

Oxenfree is a side-scroller about a group of teens – including the protagonist Alex and her new stepbrother Jonas – embarking on their annual overnight beach trip to a decommissioned military island. Strange, paranormal things start happening on the island, and the teens find themselves at the mercy of supernatural terrors. It’s a great game, albeit a little scary. However, I do recommend playing it on a larger screen, as the characters are small and it’s easy to get lost in the details. 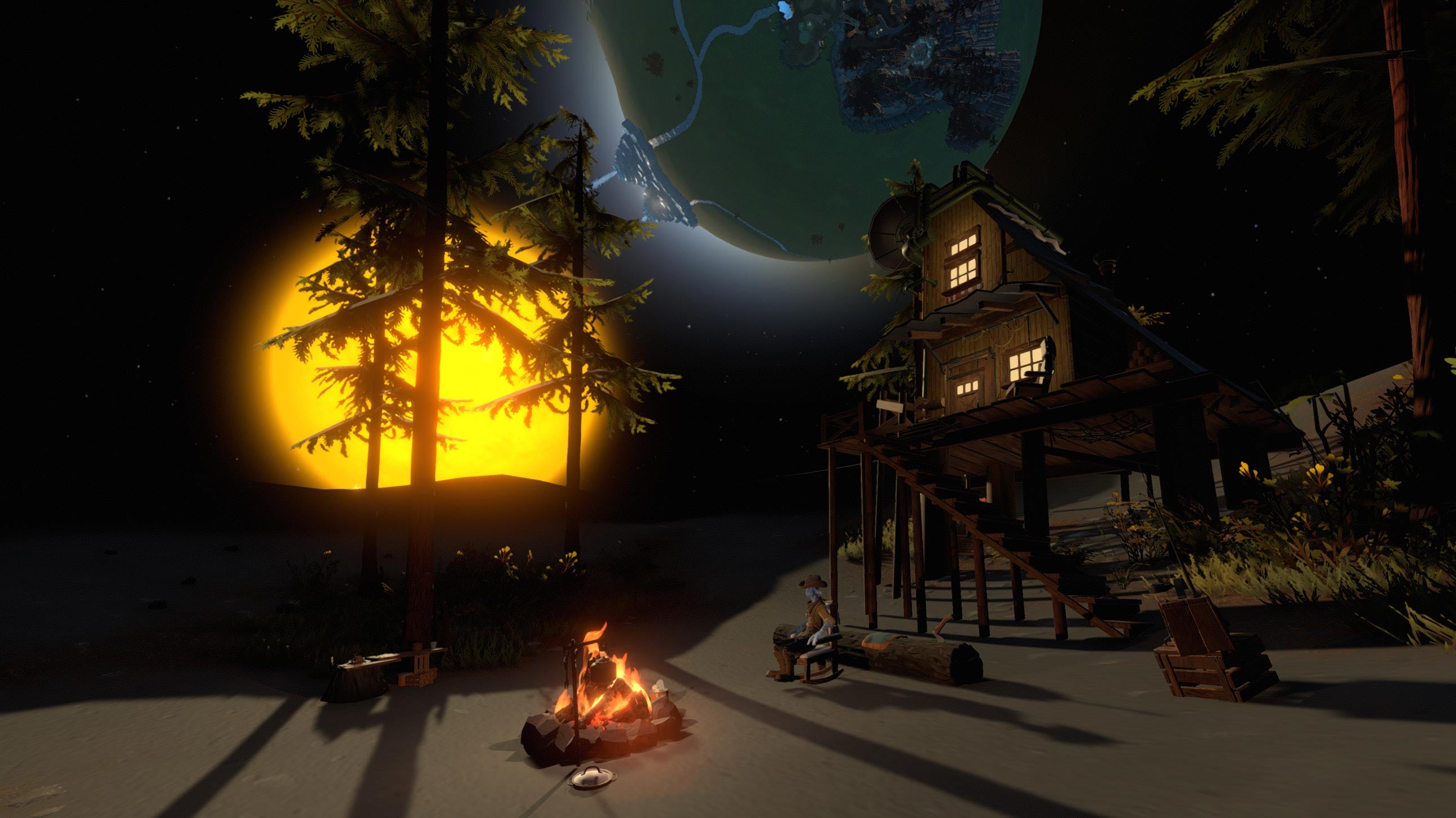 The beginning of the end in Outer Wilds. Image: Mobius Digital Games

Outer Wilds has the special honour of being the only game on this list that I haven’t tried yet, but what I’ve heard has made me yearn to pick it up. Outer Wilds is an open-world mystery game that takes place in a galaxy that’s caught in an endless time loop. Players are tasked with repeating the same 22 minutes before a planet is destroyed by a supernova, learning new details about the world and what’s going on – even as it’s constantly changing thanks to all the timey-wimeyness. 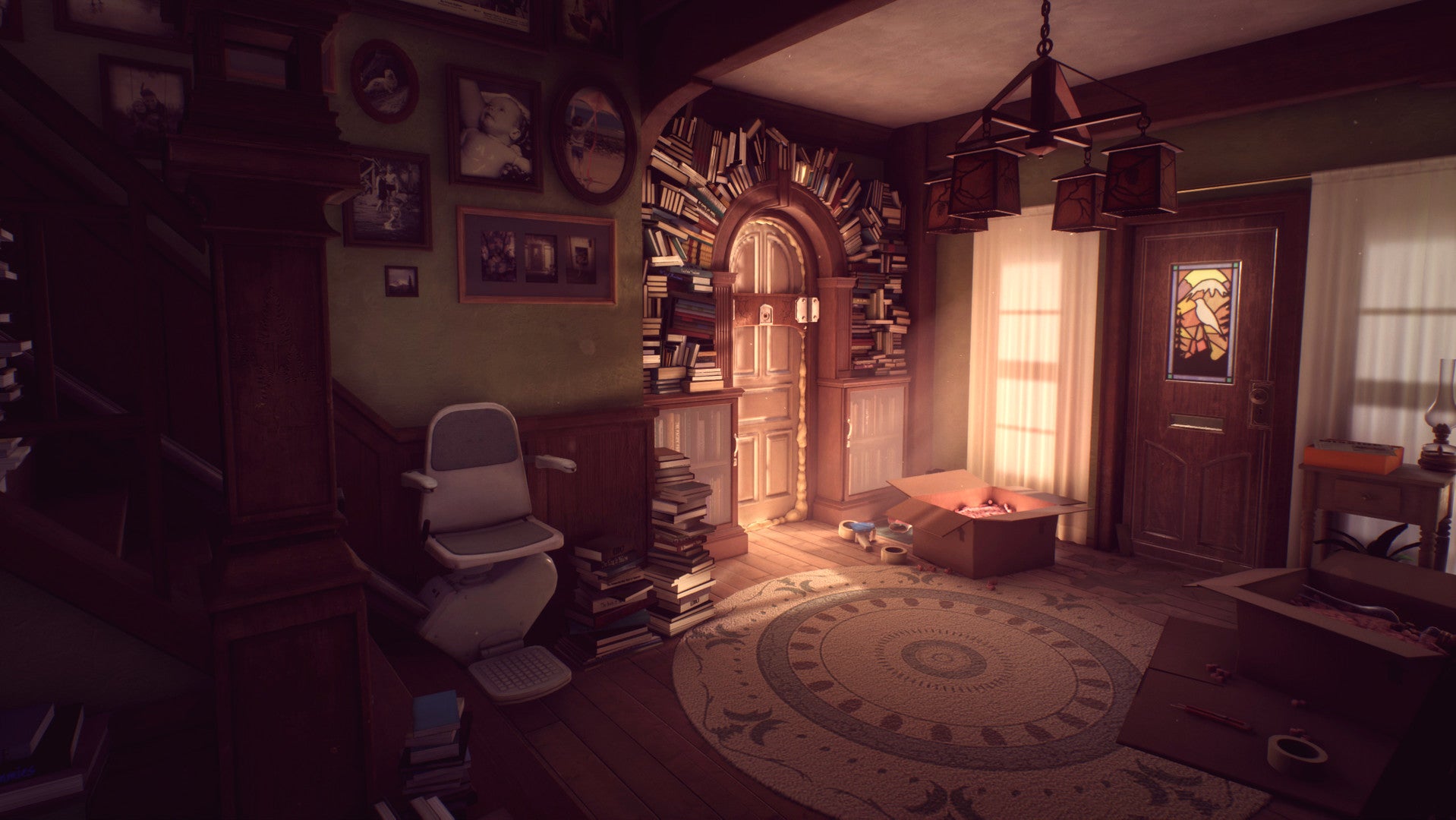 A look inside the Finch house, with boarded-up rooms that house memorials to deceased family members. Image: Giant Sparrow

What Remains of Edith Finch

Remember how I’d mentioned there was another game that had impacted me as much as Kentucky Route Zero? Well, here it is. What Remains of Edith Finch is a beautiful environmental narrative game about a young woman who’s returned to her abandoned childhood home in an effort to learn more about her family. Believing themselves to be “cursed”, the Finch family turned their home into a quasi-mausoleum to keep the legacy of each member alive. As Edith, players relive the memories of each relative through their stories. The game deals a lot with death (conceptually, you don’t actually see anyone die) so that’s something to keep in mind before playing this game.