We’re all using video-conferencing apps way more than we ever expected to these days, to keep in touch with friends and family as well as work colleagues. Believe it or not, there are actually ways to be better at video chats. Here are tips and tricks to be the least annoying person on your next group Zoom, Skype, Google Duo, or FaceTime call.

1. Check your video feed in advance

Checking your video feed in advance means you can make sure you look presentable and avoid a scramble to get in the right position and at the right angle when a call actually starts. Most video apps will let you do this quite easily, but you can also use QuickTime Player on a Mac or the Camera app on Windows to see what your webcam is seeing.

2. Make sure your mic is working

You don’t want to waste the first five minutes of your video call asking if everyone can hear you OK. Fortunately, your video-calling software of choice should allow you to do this if you check the options. There are also testing tools built into macOS (Sound then Input in System Preferences) and Windows (System then Sound in Settings).

You don’t need to have your home office lit like a film set, but you should think about light. A sunny window or bright bulb behind you is going to put you in shadow, so place a light source in front of you so people can see your face. A lamp might be enough, rather than the usual overhead room light – modern-day webcams are often better at shooting darker scenes than you might have realised. 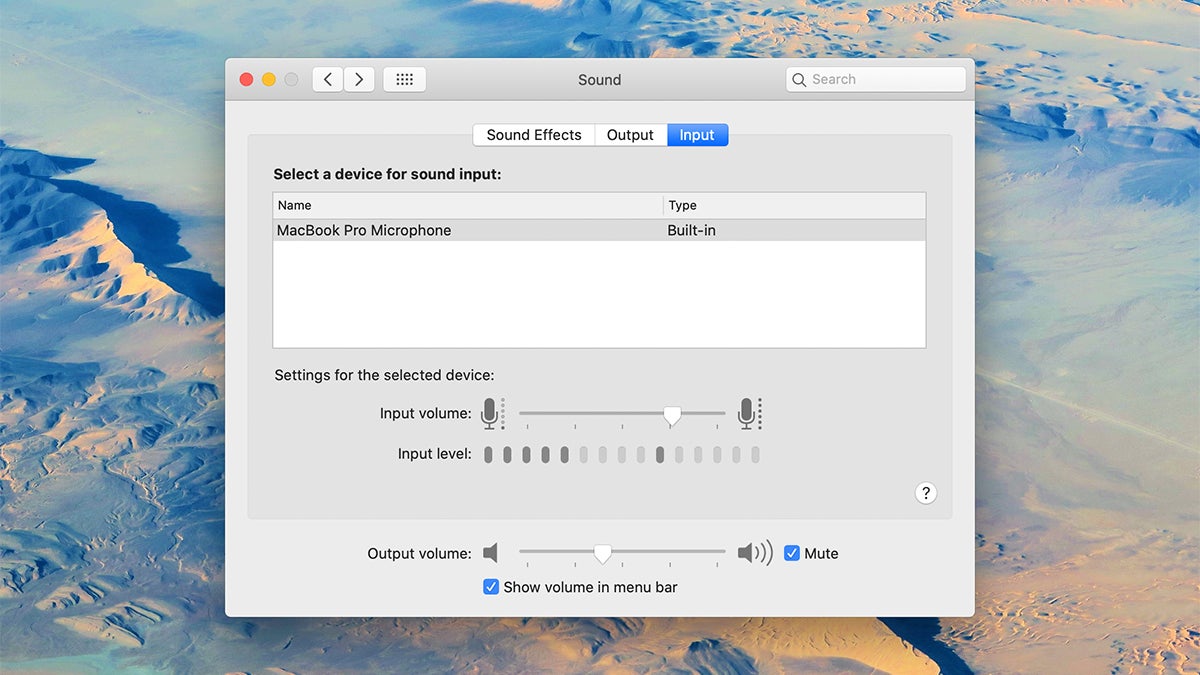 You don’t need to open your video app to test your camera and mic. (Screenshot: Gizmodo)

If you’re on a laptop, then you might have a webcam pointed up your nose. This is bad, so try and position the camera at eye level for the sake of everyone who has to look at you. Keep background clutter and distractions to a minimum, too – the video preview advice we’ve already talked about should be able to help you.

5. Use headphones and the mute button

Headphones are best for video conference calls, especially when you’re in a group with a lot of people, otherwise the audio from other feeds tends to loop back through your own device’s microphone. Make sure you know where the mute button is, too, and use it when needed, otherwise your sighing, coughing and fidgeting could be very distracting.

This is something we talk about a lot, but make sure you’re running the latest version of your video calling app at all times. This is something you should check in advance, rather than during a call. It means you won’t cause any compatibility issues or break any features while you’re chatting to friends or colleagues because you’re using an out-of-date app. 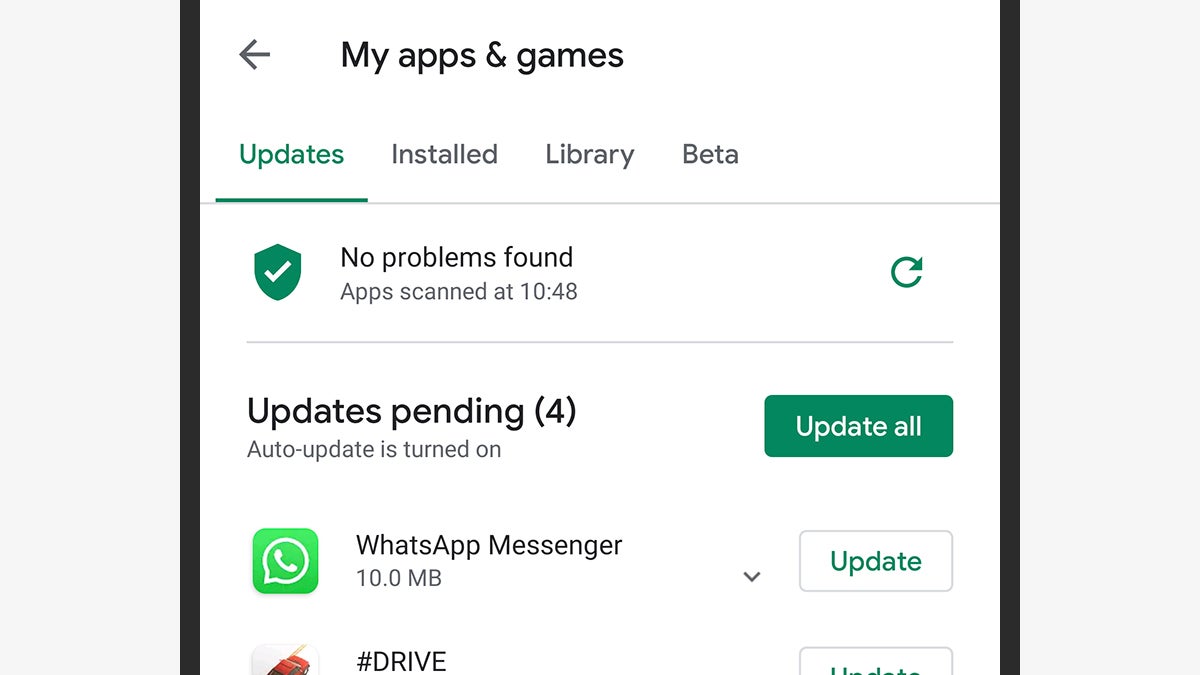 Keeping your software up to date is a must, as always< (Screenshot: Gizmodo)

7. Shut down other apps

Even if you’ve got a relatively speedy internet connection, it’s a good idea to limit the other demands on your web link while you’re making a video call – maybe don’t have YouTube streaming in the background, press pause on major app updates, and (if you’re at home) discourage your family members from starting an online gaming session at the same time.

8) Set up virtual backgrounds in Zoom

If Zoom is the video chat app you’re using, you can have a lot of fun with virtual backgrounds. Head to Video Settings on the desktop (click the arrow next to the video icon) or the More menu on mobile (tap the three dots). If you’ve got some creative ideas for backgrounds, Canva just launched a Zoom virtual background maker.

9. Make sure you’re looking your best in Zoom

Zoom can also make sure you’re looking your best with a few discrete enhancements on top of your video feed (like smoothing your wrinkles). In the desktop app, you’ll find the Touch up my appearance option in the Video Settings panel (click the small arrow by the video icon on the toolbar). It’s in the general Settings screen on mobile. 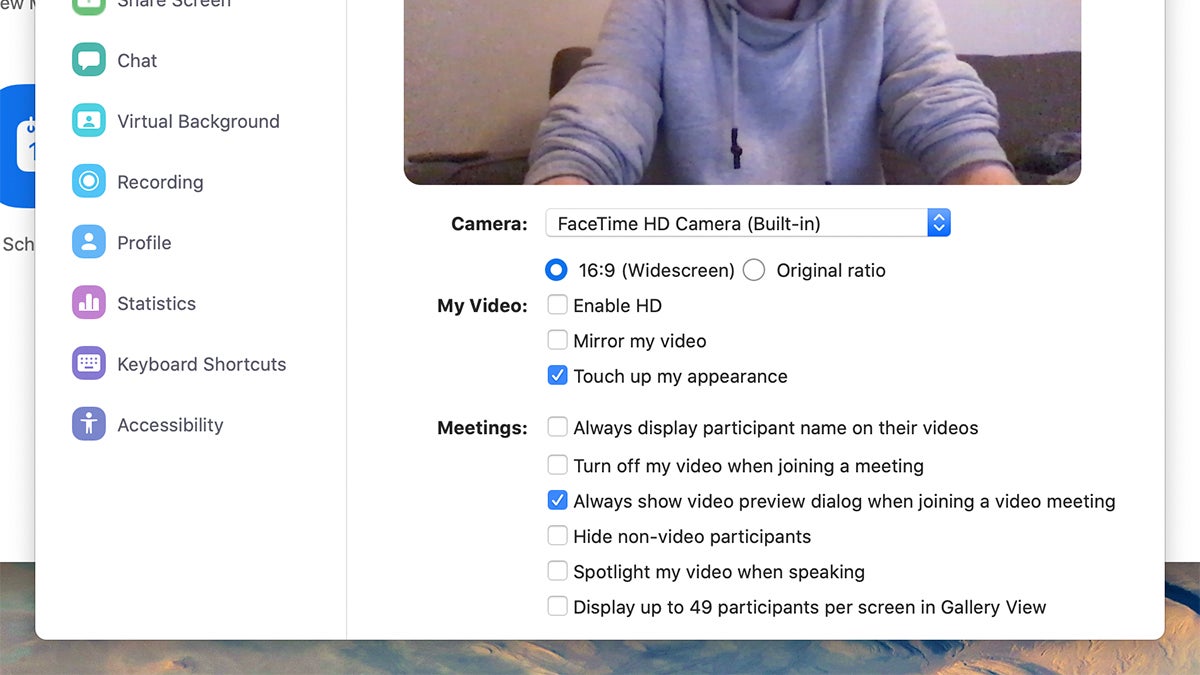 10. Set up some breakout rooms in Zoom

Breakout rooms are a great way of encouraging discussion and cutting through the noise on Zoom, particularly if there are dozens and dozens of people on the same video call. If you’re a host, you can create them by clicking Breakout Rooms on the toolbar, and even preassign people into rooms before a call in your main Zoom dashboard.

Screen sharing is a really useful feature in Zoom. Hosts and participants can both do it (unless the host has disabled the feature), and other users can get involved by adding annotations (again if allowed by the host). To share a screen or a blank whiteboard, pick Share Screen on the toolbar on the desktop, or Share Mobile if you’re on a mobile device.

Maybe Google Duo is your video calling app of choice, and despite its straightforward interface, Duo has plenty of under-the-radar features to offer. One of those is filters, though they’re a bit more suited to calls with friends and family rather than work colleagues. In a video call, if you tap the Filters or Effects button on the right, you can see what’s available.

Maybe you don’t want to join a last-minute live video call with your friends or colleagues, or maybe you’re struggling to find a time to meet due to living in different time zones. Whatever the reason, you can record a video message for a group of people rather than going live in Google Duo. Choose Create group from the contacts screen, give the group a name, then tap the Message button.

If you’re using Google Duo for a video call on a phone or tablet, you can switch between the front-facing and rear-facing cameras on your device for your live video feed. For instance, you might need to show your fellow callers what you’re looking at. During a call, you’ll see a switch camera button on screen (it’s the one that’s a circle with arrows around it). 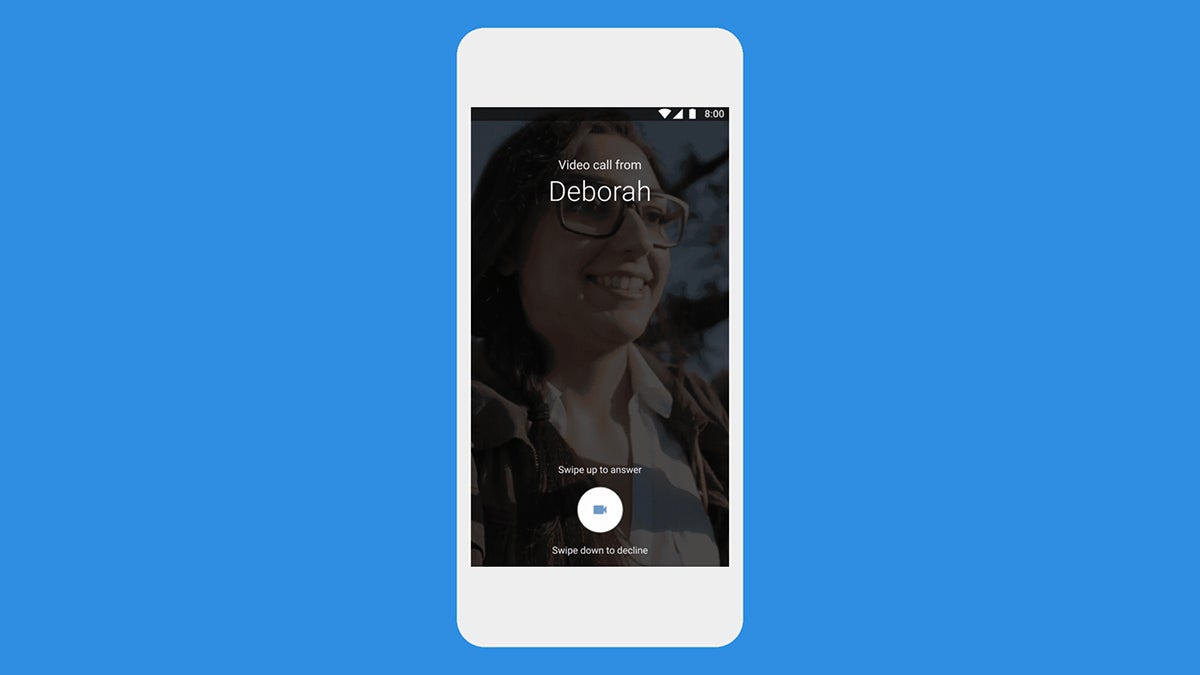 Google Duo shows you who’s calling before you pick up. (Image: Google)

One of the more unique features in Google Duo is Knock Knock, which lets you see a video preview of who’s calling before the connection is actually made (and vice versa, if you’re calling someone else). To enable or disable this, you need to head to the app settings: Click the cog icon if you’re on the web or the triple-dot More button in the mobile apps.

16. Keep FaceTime calls on top of other windows

If you’re all in on Apple devices and services and use FaceTime for your calls, you might use the app built into macOS rather than the one on your phone or tablet. To stop other programs from getting in the way and blocking your view of everyone else on your call, open the Video menu then make sure Always on Top is ticked while FaceTime is running.

17. Switch to Animoji or Memoji on FaceTime

Using an iPhone with Face ID gives you access to Animoji and Memoji, which you can use in place of your face on FaceTime if you’re feeling less than beautiful or a little shy. The lip and head movements should still sync up with the audio. Tap your feed, then Effects (the little star), then the Animoji icon (the cartoon monkey head) to get started. 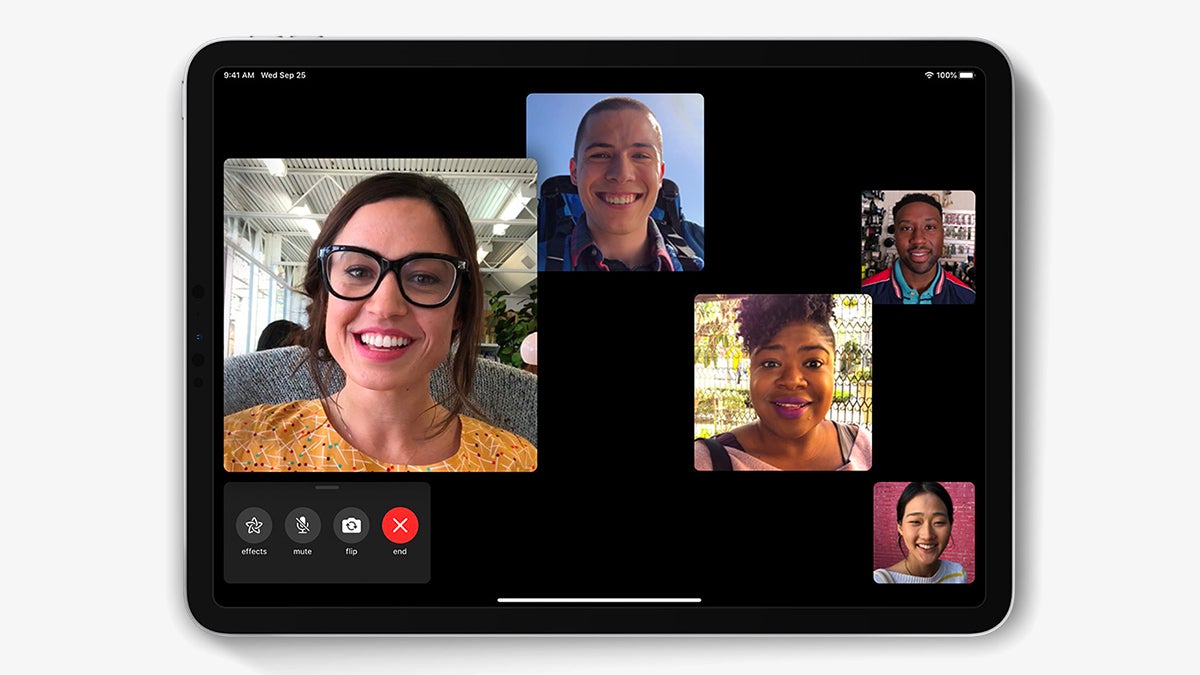 Tap on any thumbnail in a FaceTime call to get a bigger version. (Image: Apple)

Another useful FaceTime feature on the iPhone is the ability to add text labels on top of your video feed, to explain who you are, or where you are, or what your current status is. During a call, tap your thumbnail, then the Aa button to add text. It’s a pretty basic feature, but you can drag the text around to reposition and resize it on the screen.

19. Focus on one person in FaceTime

When you’re on a group video call in FaceTime, the app will by default increase the size of the thumbnail of the person who’s talking. If there’s anyone else you want to get a closer look at, just tap the relevant thumbnail; tap it again to lock that person in place. You can make your own thumbnail bigger by tapping on it as well.

20. Turn on subtitles in Skype

One of the best features that Microsoft’s Skype app has to offer is live subtitling for your video calls. If you go into Calling then Call subtitles from the app settings, you can switch them on for all calls, and even have them translated into a different language. To enable them during a Skype video call, tap the Plus button then choose Turn subtitles on. 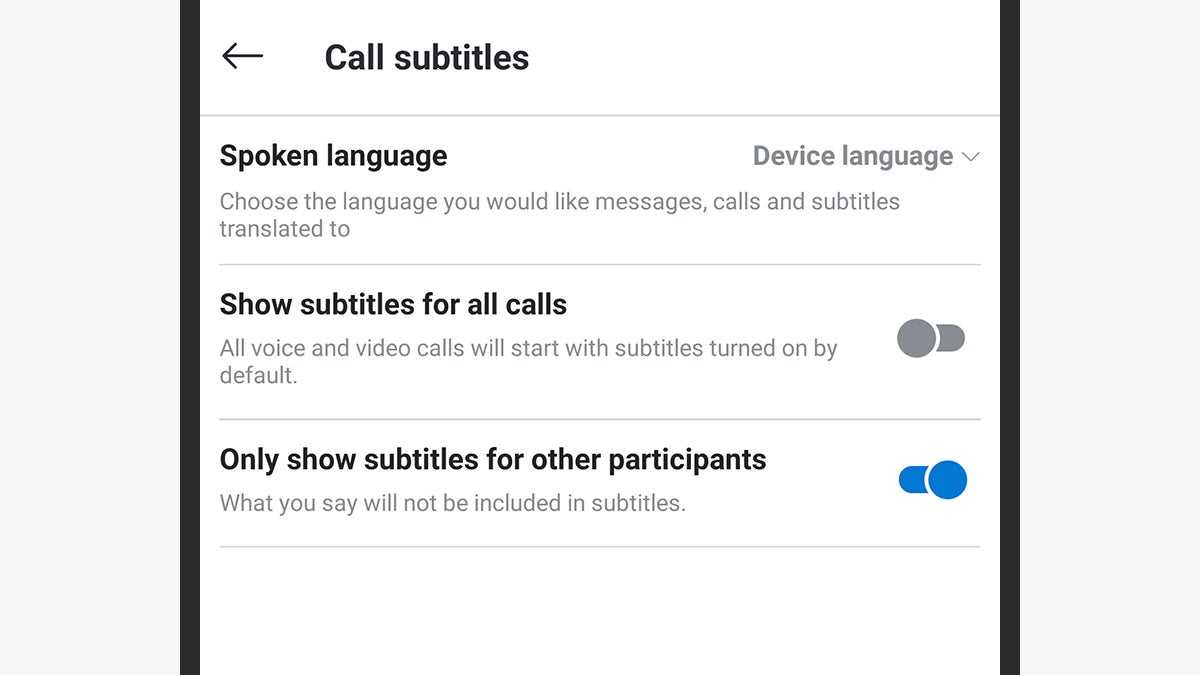 Skype can subtitle your calls in real time. (Screenshot: Gizmodo)

Recording video calls means you can capture special moments, or log what’s happened in a meeting, or help someone who missed a call to catch up – and everyone gets alerted when the recording starts, so you won’t catch anyone out. To begin a recording (which can be saved to your current device), tap the Plus icon on the video screen then Start recording.

23. Blur your background in Skype

Skype may not have the virtual backgrounds that Zoom can offer, but it will blur out the background of the scene you’re in, which can make a call less distracting and busy for people looking at your video. It only works in the desktop apps for the time being, though. Hover your mouse over the red Video button, then choose Blur my background.