Apple iPhone SE Review: This Is the iPhone to Buy Right Now

Rumours of a cheaper, smaller iPhone swirled for years before Apple actually announced the £420 second-gen iPhone SE this month, so it’s likely that the company has long been planning to release a successor to its popular pint-sized iPhone. But the iPhone SE is so much a gadget of this specific moment in time that, if I didn’t know any better, I’d think Apple rushed its release.

The SE looks like an iPhone 8, complete with tiny 4.7-inch display, giant bezels, and a home button with Touch ID. But inside is Apple’s A13 Bionic processor, lifted straight from the iPhone 11 lineup, which makes everything about the SE faster and smarter. Even the cameras, which are the same ones used in the iPhone 8, get an upgrade due to the processor.

I don’t consider the new iPhone to be a true SE successor, because it’s not a truly tiny phone. Those days are gone, and they’re not coming back. But the second-gen SE is better than I anticipated, and the best iPhone for most people right now.

What is it?: Apple's cheapest, smallest, newest iPhone

Don't like: Smaller screen is a tough adjustment if you're used to a larger phone; battery life could be longer.

Things are weird right now. When I received an iPhone SE review unit, I realised I couldn’t test its cameras the way I normally would – low-lit nights out with friends, crowded beach days, or scenic hikes. I had to shoot around my apartment, on my balcony, and on the street in front of my building (with a mask on, while remaining six feet from others). I didn’t expect to be all that impressed with the SE’s photos. After all, the newest iPhone is using the 3-year-old iPhone 8's 12-megapixel rear camera lens and its 7-megapixel front-facing one, an iFixIt teardown confirmed.

But that A13 Bionic processor is kind of magical. Its image signal processor and neural engine, paired with iOS 13, are enough to overcome many of the hardware shortfalls (different sensors, no telephoto or ultra-wide-angle rear lenses, and no depth-sensing lens on the front) to create images that are often on par with what you’d see from the iPhone 11 Pro Max – which, at £730 more than the SE, is Apple’s priciest iPhone. 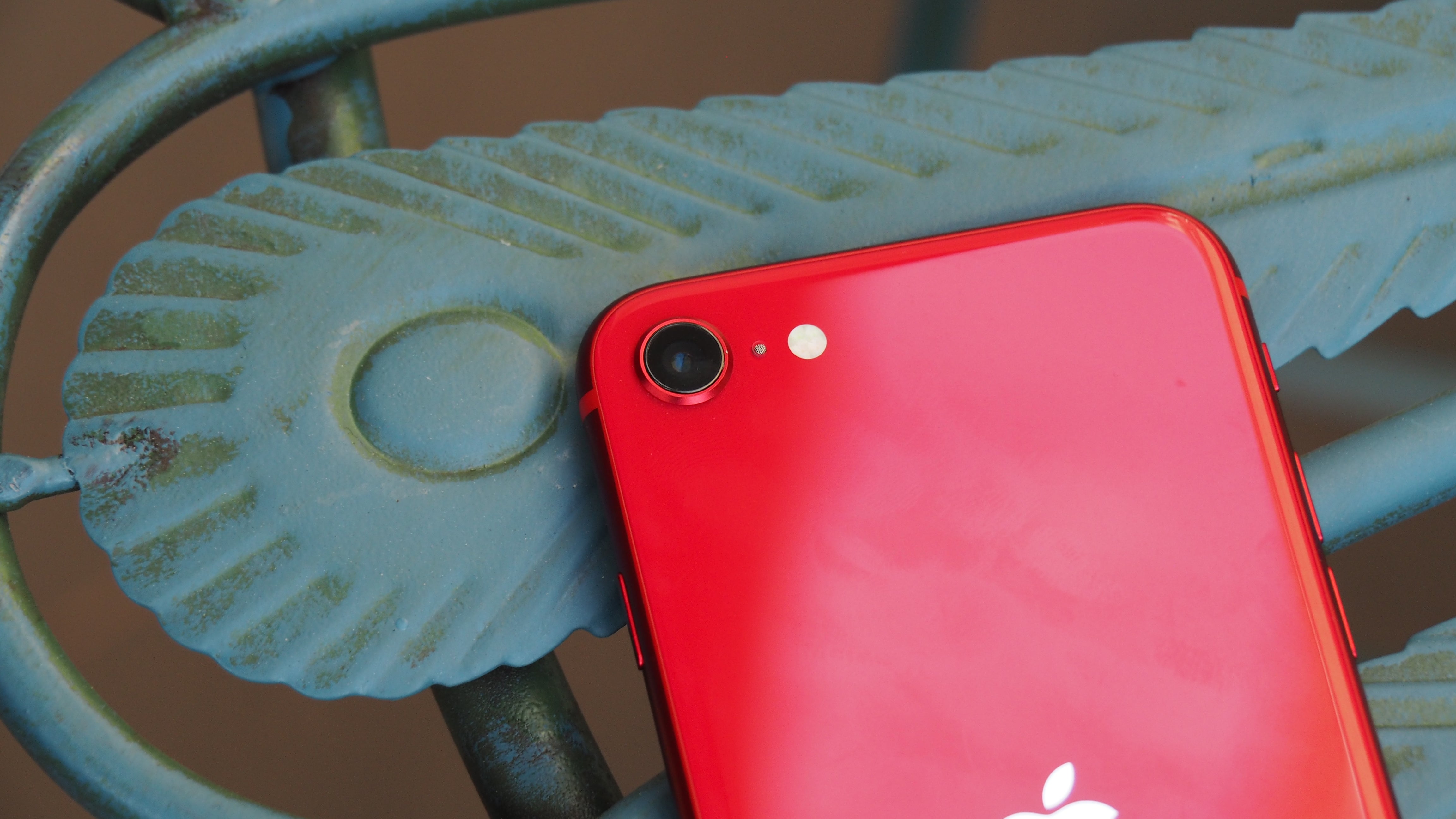 I compared the SE to the Max (the only 11 model I have on hand due to quarantine) and was pleasantly surprised, particularly with the cheaper phone’s portraits. The smart HDR also makes backlit shots more detailed.

But the SE lacks a dedicated Night Mode or the Pro’s Deep Fusion feature, and in low light, colour and detail are lost. The SE’s 5x digital zoom falls short of the 11 Pro Max’s 2x optical and 10x digital zoom. As you can see in the shots below, the SE is very good at most things, particularly for its low price, but if you want an amazing camera for nighttime and telephoto shots, you’ll need to spend more. Much more.

The fact that the SE can hold its own against the 11 Pro Max in a variety of scenarios is impressive. When you look around at the £400-ish smartphone landscape, very few cheap phones’ images rival a flagship’s. In fact, the only one I can think of is Google’s Pixel 3a, which is also a great budget phone, but I’m not sure how many people are still trying to decide between iPhone and Android.

With the world what it is, I realised that Touch ID, which has come to seem outdated to me, is incredibly useful now that Face ID doesn’t work when I’m wearing a mask. 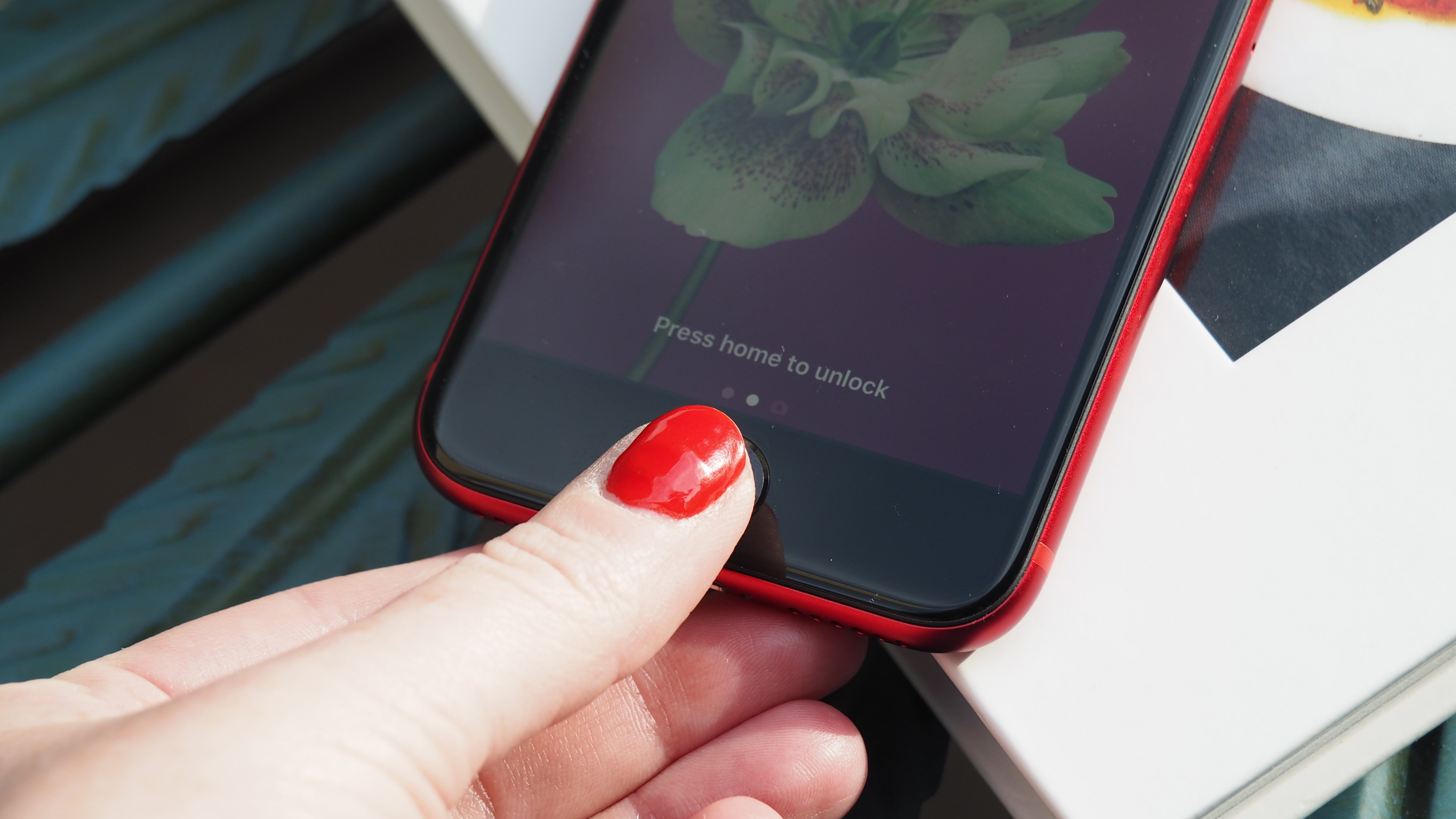 Touch ID is faster than I remember it being, though I haven’t used it since I upgraded from an iPhone 7 Plus to an iPhone XS. I appreciated being able to pull my phone out at a supermarket to use Apple Pay without having to type in my passcode to authenticate the transaction. Will I appreciate this when I no longer have to cover my face in public? Maybe not.

What I really want is a 4.7-inch iPhone that is almost entirely screen, with an in-display fingerprint sensor as a backup unlocking method and wildly good cameras – an iPhone 12 Pro Mini, if you will. And ideally, I’d get all that for £420. Clearly, that’s not going to happen. After a few days, the SE’s thick bezels didn’t bother me much. But the SE’s screen size felt cramped to me, even after a week. I wanted the expansive display I’ve grown used to on the XS and 11 Pro. If you’re upgrading from an iPhone 8 (or an older phone, the like the 6s or 7), the screen size won’t bother you. 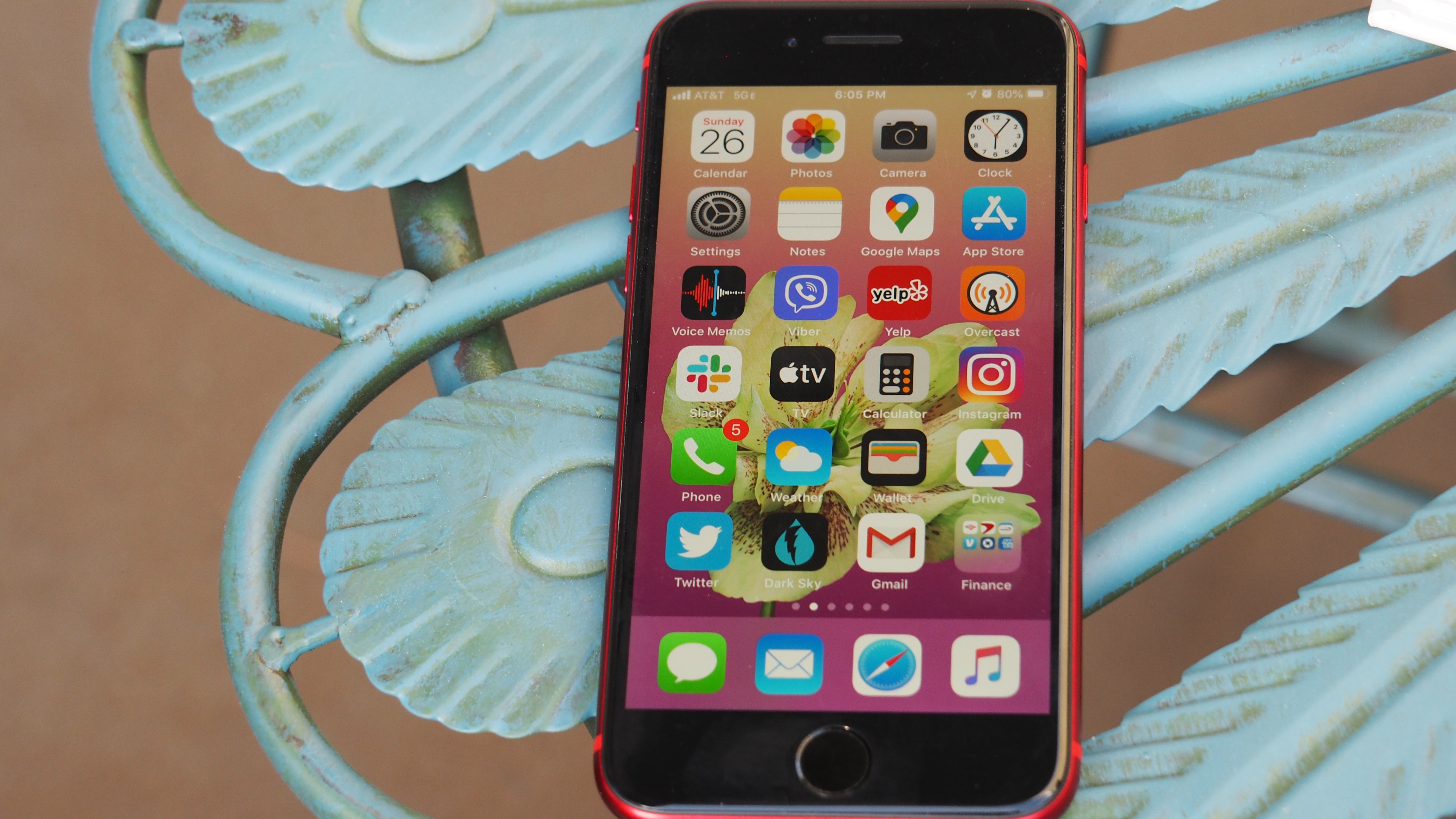 And for £420, you do get a tonne of features that make those bezels worth the trade-off. When it comes to performance, the SE felt every bit as fast as my daily driver, the iPhone XS, which has a 2018-era A12 Bionic chip. The SE’s A13 Bionic powers the great photos you saw above, but also some pretty neat augmented reality apps and ultra-smooth gaming.

The SE’s glass design also enables wireless charging, which is rare in a sub-£500 phone. (You don’t get that with the Pixel 3a.) Anecdotally, the SE’s battery life lasted a full, 16-hour day (and then some) in my week of testing. I watched YouTube videos, sent Slack messages, streamed music while working out, and Instagrammed more than a healthy person probably should – hey, quarantine isn’t easy. In our video rundown test, the iPhone SE lasted a little over 9 hours, which is in line with the iPhone 8 before it. If you need a longer-lasting iPhone, the Pro models are the ones to buy.

The £730 iPhone 11 is also a solid, if more expensive, alternative and lasted 12 hours in our testing. So for £310 more you get better battery life, a bigger screen, dual lenses instead of the triple-lens system on the Pro models, but also Night mode and Deep Fusion for Pro-level quality photos. The problem, besides being £310 more, is the 6.1-inch 11 is massive, and that will make a huge difference for many people. 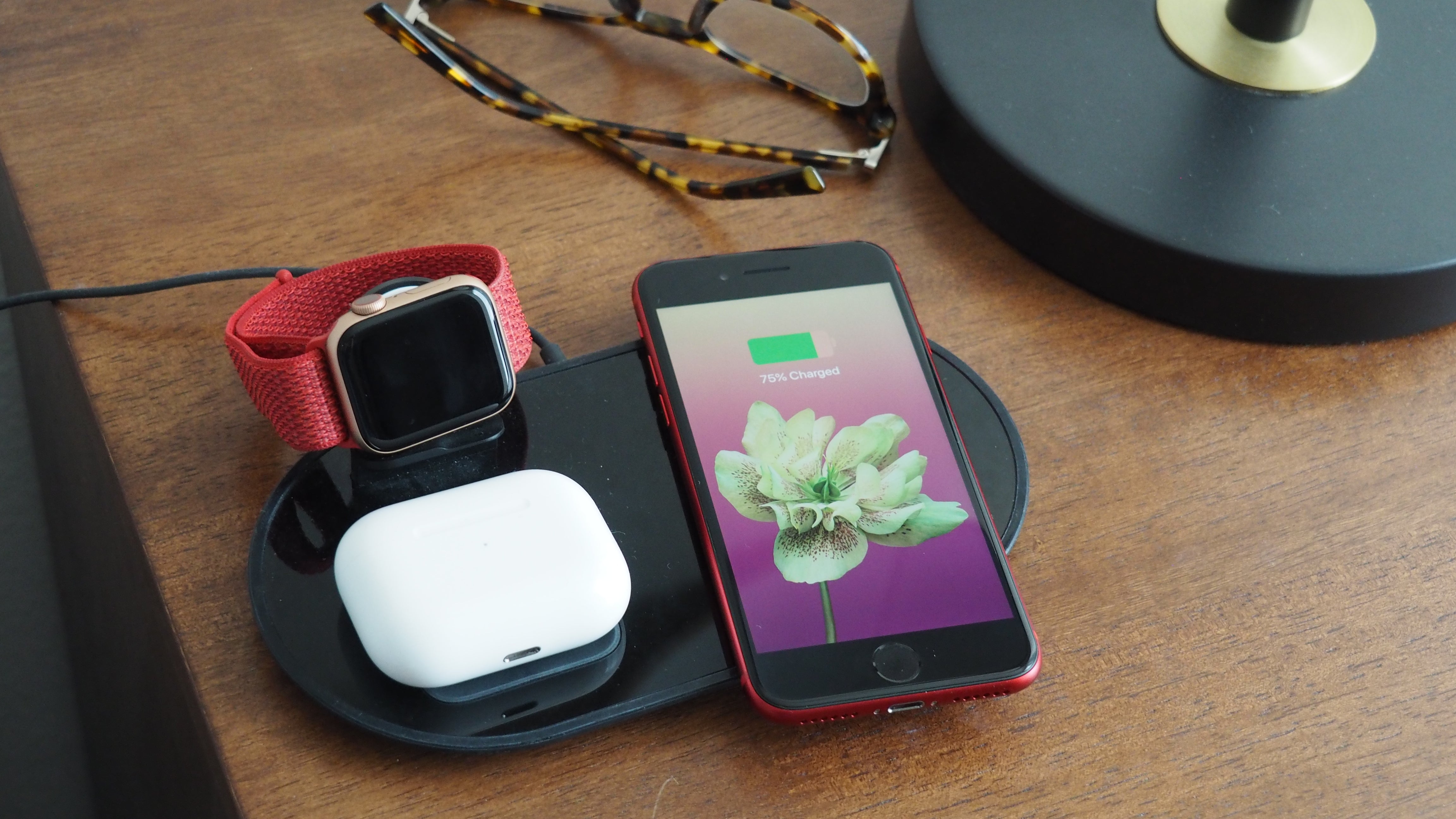 Would I choose the iPhone SE over the 11, the 11 Pro, or whichever £1,000 iPhone comes out this autumn? No, but that’s more due to the demands of my job than the SE’s failings. Its price and features are perfectly designed for this uncertain time, when people are focused more on staying healthy and keeping their jobs and homes than balling out on flagship phones. Living without a smartphone is basically nonnegotiable the year of our lord 2020, so if you need a new device and you’re watching your wallet, the iPhone SE is the budget phone to beat.