It was on this day in 1990 that the Space Shuttle Discovery deposited the Hubble Space Telescope into low Earth orbit. To commemorate this important anniversary, NASA and the European Space Agency have released this stunning Hubble image of two nearby nebulae – vast expanses of clouds and dust in which stars are born.

Few telescopes in history are as easily recognisable as Hubble, and for very good reason. As one of the first space-based telescopes, Hubble fundamentally altered our view of the cosmos, giving us unprecedented views of planets, galaxies, nebulae, comets, supermassive black holes, and even colliding asteroids in a star system far, far away. Hubble also contributed to new cosmological insights, such as the realisation that the universe’s expansion is actually accelerating.

After three decades, Hubble is like the Energizer bunny – it just keeps on going. To date, it has made around 1.4 million observations and provided data to fuel an astounding 17,000 peer-reviewed scientific papers, according to a Hubble press release. Safe to say, its legacy will continue to reverberate in scientific communities for decades to come. 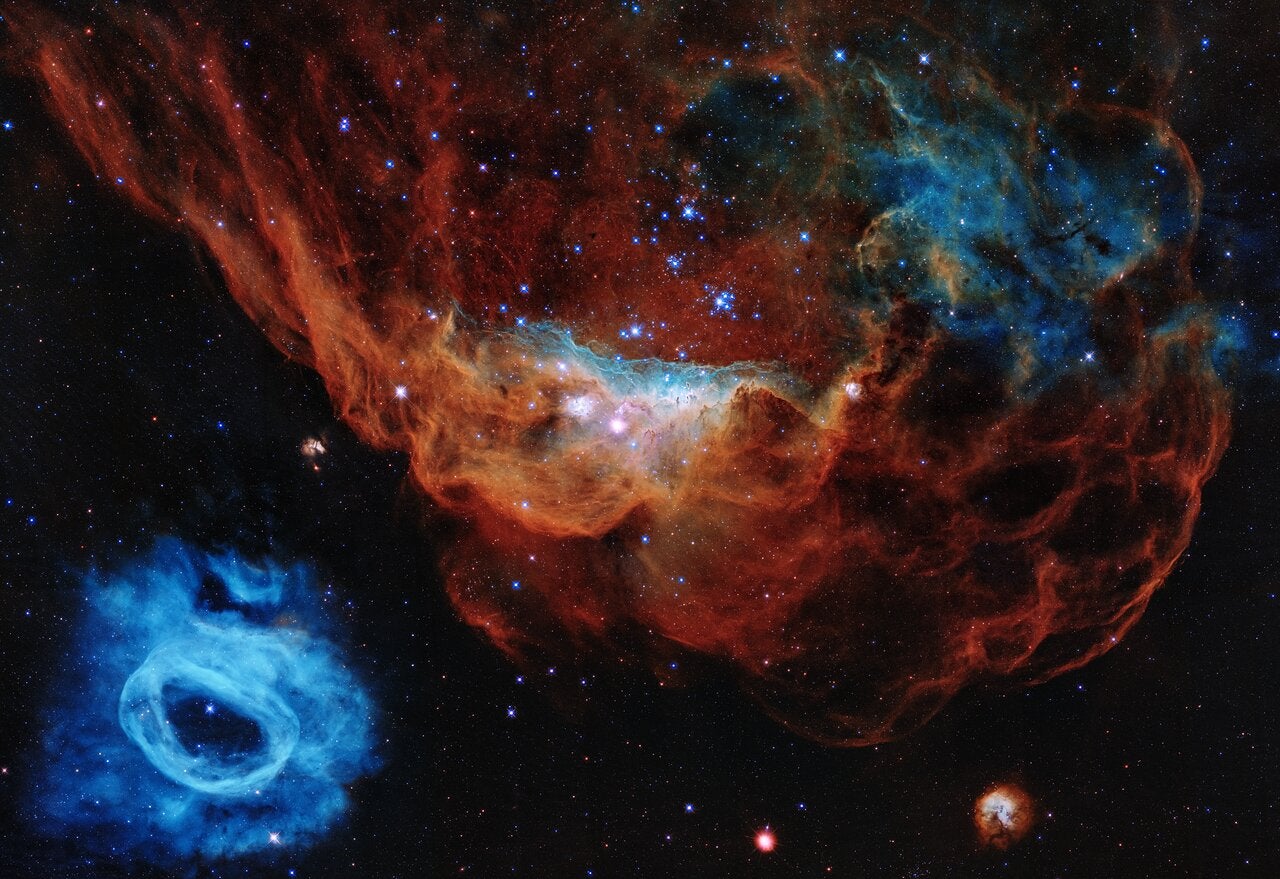 As it does every year on the telescope’s birthday, the Hubble team released a newly acquired image to show off its capabilities. This year’s photo shows a pair of nebulae: NGC 2014 and NGC 2020.

It’s within these roiling expanses of cosmic debris that stars are born. Gas and dust coalesce under the inexorable influence of gravity; beyond a certain threshold, these masses trigger a nuclear fusion reaction that sparks a star to life.

NGC 2014 and NGC 2020 are both dominated by stars 10 times larger than our Sun, but they shine for only a fraction of the time, expiring after a few million years, as opposed to 10 billion years that the Sun will burn.

A cool feature of NGC 2014 – the large nebula at the centre of the image – is the glowing orb in its middle. This patch is a conglomeration of many bright, heavy stars that have blown away their surrounding envelope of hydrogen gas and dust, according to the Hubble press release. These stars produce powerful stellar winds that erode the gas clouds seen at the top and right of the image. The outer boundaries of the nebula appear as bubble-like structures and are dubbed “brain coral,” which they resemble.

Nebulae NGC 2020 – the stunning bluish feature at bottom left – was forged by a massive star approximately 200,000 times brighter than our Sun. As the Hubble team explains, it’s an example of a class of stars known as Wolf-Rayet stars:

They are thought to be the descendants of the most massive stars. Wolf-Rayet stars are very luminous and have a high rate of mass loss through powerful winds. The star in the Hubble image is 15 times more massive than the Sun and is unleashing powerful winds, which have cleared out the area around it. It has ejected its outer layers of gas, sweeping them around into a cone-like shape, and exposing its searing hot core. The behemoth appears offset from the centre because the telescope is viewing the cone from a slightly tilted angle. In a few million years, the star might become a supernova. The brilliant blue colour of the nebula comes from oxygen gas that is heated to roughly 11 000 degrees Celsius, which is much hotter than the hydrogen gas surrounding it.

Hubble is expected to function for another 10 to 20 years, after which time it will fall back into Earth’s atmosphere. The telescope still has plenty of life left in it, but we can already look forward to its successor: the James Webb Space Telescope, which should launch in about a year.

For those of you hoping to make this photo your desktop wallpaper, go here to select and download your image of choice.