It’s been approximately 12 thousand days since we've hunkered down in order to respect social distancing safety measures to curb the spread of covid-19. Unless you’re a celebrity holed up with limitless Dead Sea mud masks, this has hit you hard, and there’s a good chance you’re dealing with waves of heart-stopping anxiety over whether you’ll be able to pay rent next month.

In the meantime, dishes accumulate in concert with the Earth’s rotation around the sun, and night falls, and we (I) turn to backgammon, a game that probably involves more strategy than I’ve managed to figure out. I’m sure some of my colleagues put on trousers today, though I cannot confirm. We struggle daily to master the unmute function in video conferencing sessions, though we feel lucky to still have jobs in a world where many do not. Whilst a certain member of the Gizmodo team delights in his chicken coop outfitted with the latest technology, those of us seeking respite in public parks must undertake outdoor excursions with the vigilance one would exercise during a zombie uprising.

But we can rest easier knowing that we are not alone. If stream counts on Twitch’s outdoor channels are any indication, hundreds of thousands of people are longing to be taken on a walk. (A representative for Twitch declined to comment on numbers but confirmed to Gizmodo that streams are up in all categories.) We’ve organised the entries below by which piece of the outdoors you’re most missing. If you look forward to taking out the bins now, if only to feel the wind on your face, then you can probably find some solace in staring out the digital window on Twitch. 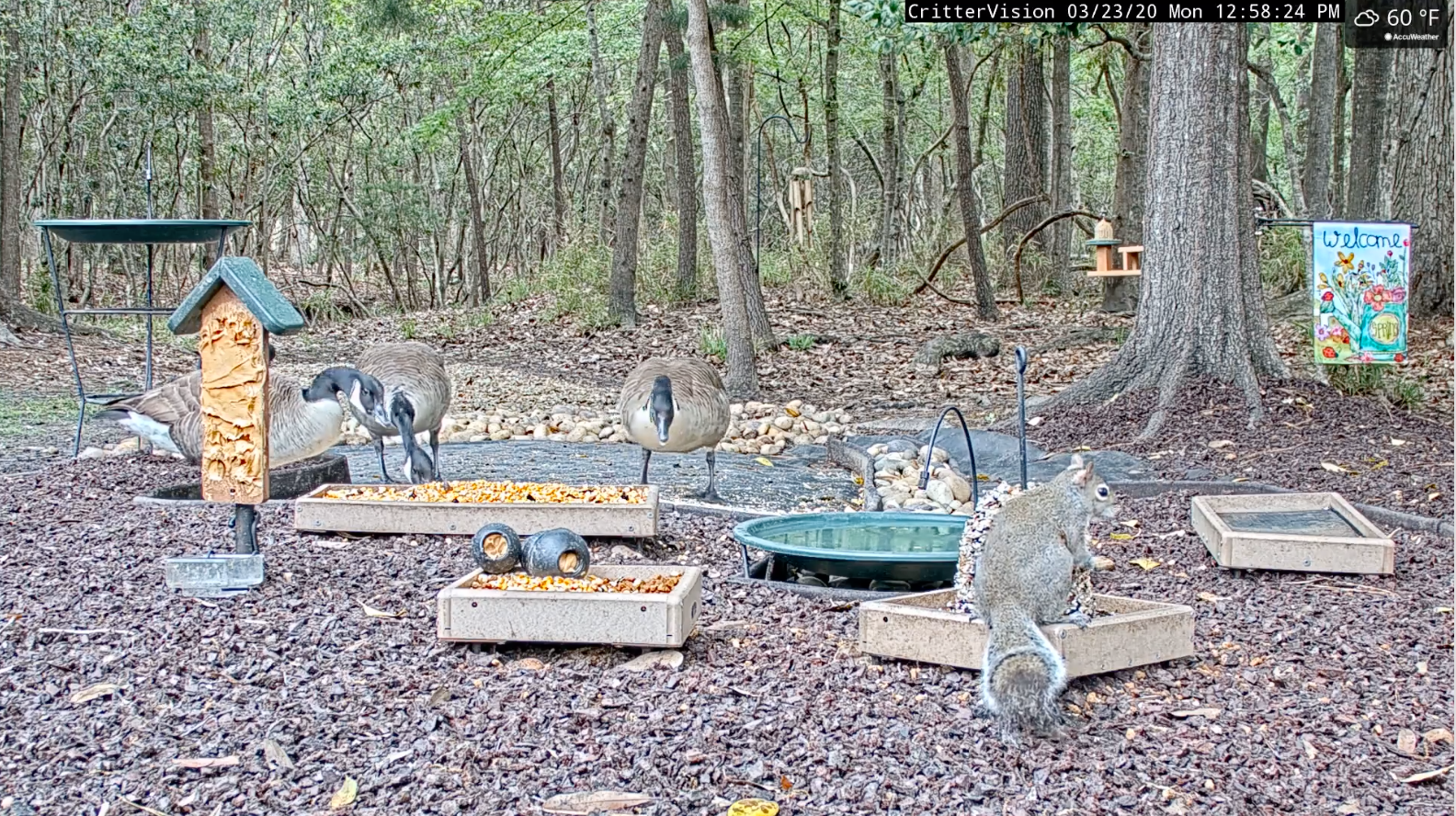 CritterVision is basically what my fire escape has become over the past month, which is to say, an acropolis of bird feeders. So far, nobody’s moved into my town (day four: putting out a sandwich board), but the peanut butter-slathered backyard banquet over at CritterVision has managed to attract a kingdom of geese, possums, foxes, raccoons, and deer. Sometimes raccoons and deer at the same time. Greatest Hits: “Deer Get Spooked” and “What’s that Noise?” 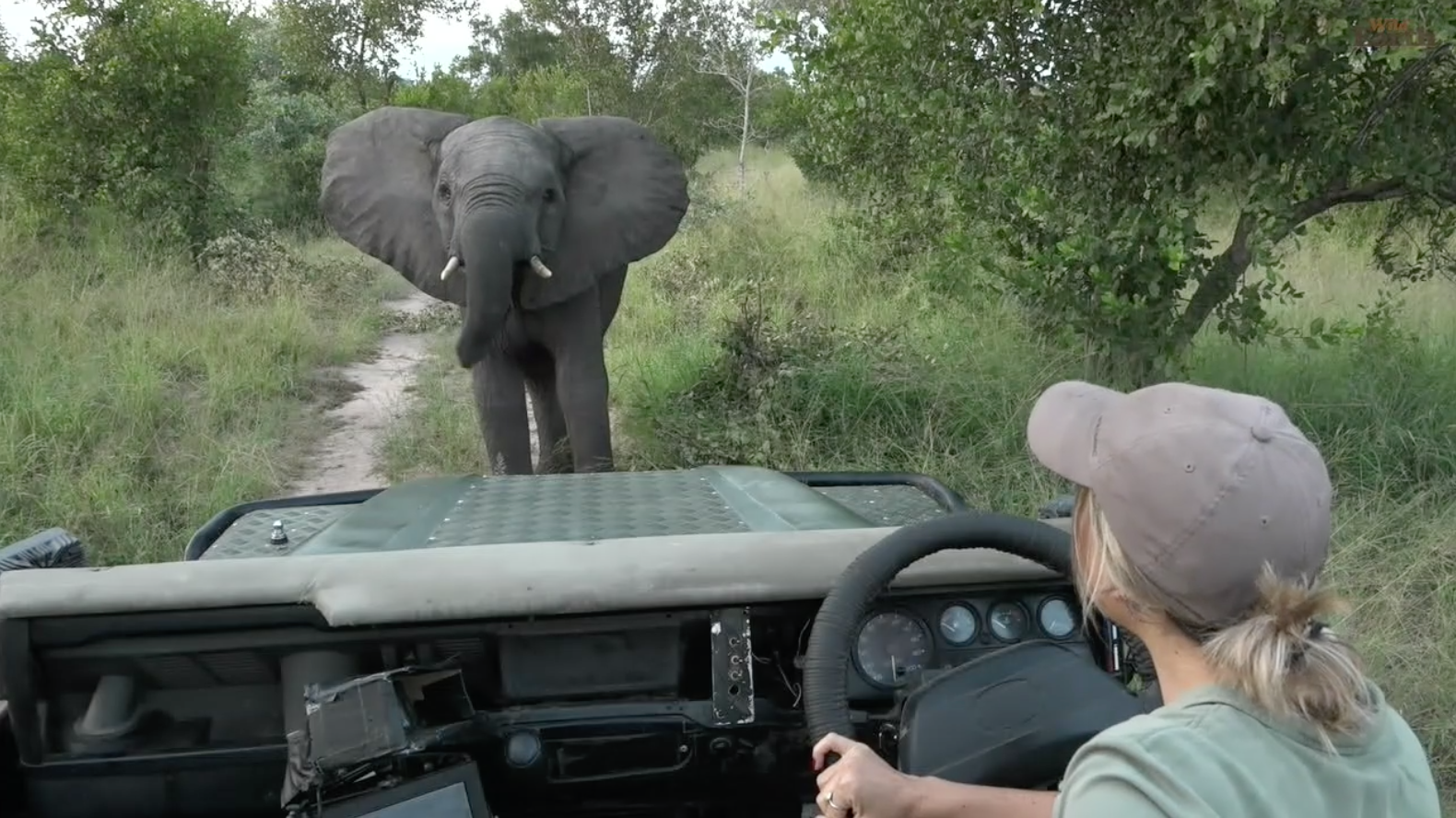 Lowly laptop slaves can spend three hours roaming around African nature preserves with WildEarth. With its professional hosts, news channel subheaders, and steady camera work, WildEarth boasts the sheen of a nature documentary (they’ve partnered with National Geographic WILD) but still maintains the loose anything-could-happen vibe that makes Twitch streams exciting (although in this case, that’s more often a crocodile attack than a blooper). Plus, they’re not afraid to pop a piece of dung in their mouths, on occasion. Stateside, the Monterey Bay Aquarium is running a jellycam, and Ferris State University is monitoring an osprey nest. 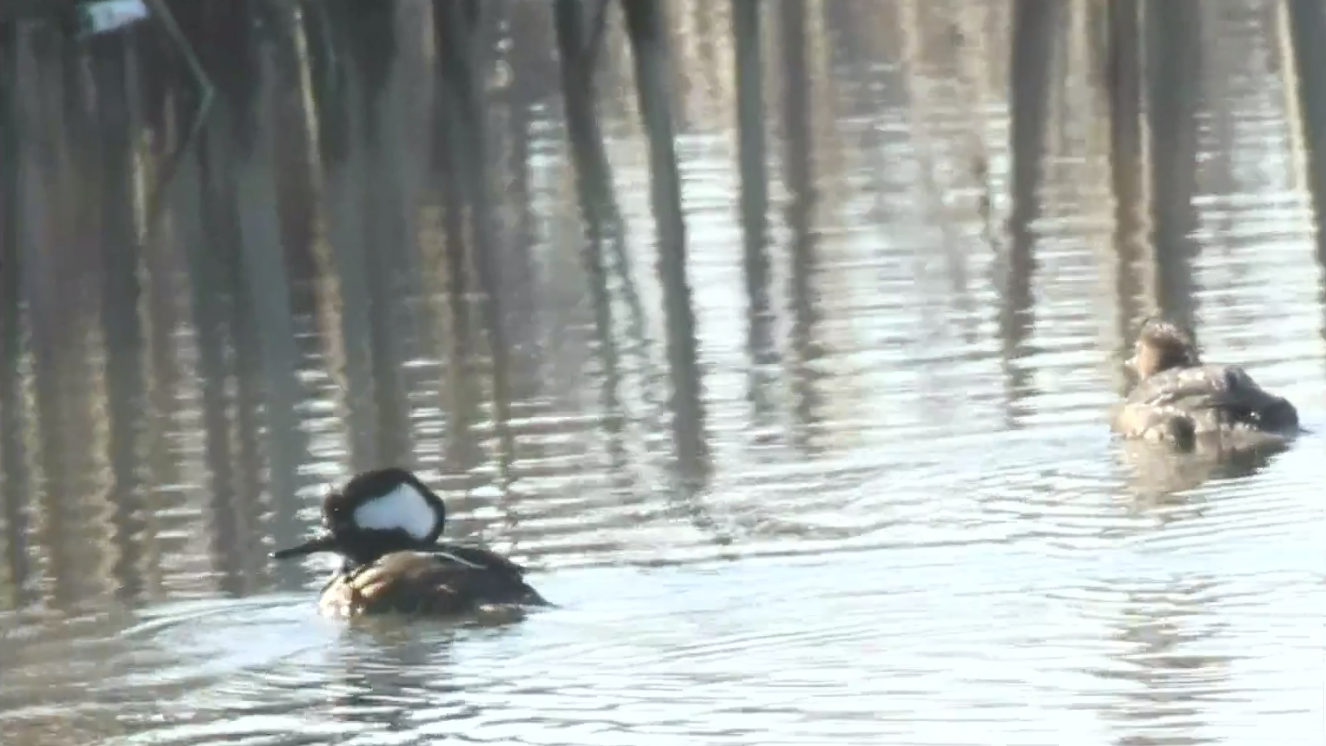 For a failed birdwatcher whose efforts have been stymied by the fact that I don’t know what I’m looking at or how excited I should be about it, I’m delighted by how DamianExplores transforms nondescript wintry roadside plots into thriving oases of biodiversity. This stream opens with a bang – Widgeons!, and then the surprise appearance of a male Hooded Merganser showing his crest! – two sights I would previously have written off as “birds” and “other birds.” Damian’s thrill is infectious. He’s an excellent resource for aspiring birdwatchers who won’t have access to North American expanses or the African plains anytime soon; also has entry-level gems like a Great Blue Heron and Great Horned Owl. Image: Richard Herring; all streams are of this quality (Twitch)

The lord has gifted Richard Herring with a field of stones, and he has shared his bounty via Twitch streams about the practice of “stone clearing.” What is stone clearing? It is an “ancient art” of “removing stones from a field and using them for better purpose,” explains the description for no less than 63 related podcast episodes. Herring reassures listeners in episode one that they, too, can master the skill:

“A lot of younger stone clearers are overwhelmed. They say to me, Rich, how do I do this, this profession, this vocation? Am I placing stones? Am I throwing stones? Am I just trying to get the stones off the field, or am I trying to build some kind of structure? Can I kick? If I throw the stones and they miss the place I’m aiming for, am I allowed to move them?”

All of your questions are answered in Herring’s numerous guides to stone clearing. For a bonus stone-clearing challenge, attempt to make it through the entirety of “Stone Clearing Chapter 15: From Inside a Clearer’s Pocket,” in which Herring accidentally recorded almost the entire podcast from his phone mic in his pocket and thus labelled it: “an affront to audiophiles everywhere.” Greet the day with delightful 19-year-old Mary, proud owner of 15 goats. Mary milks six of them every day at 2 pm and 5 pm UK time, respectively. Tune in with commenters who know the goats by name and commiserate over recent job losses and isolation. While you’re on her page, scoop some tips on waffles with duck eggs and goat butter and maybe tab over to Mary’s Etsy store for goat milk soap and lotion. 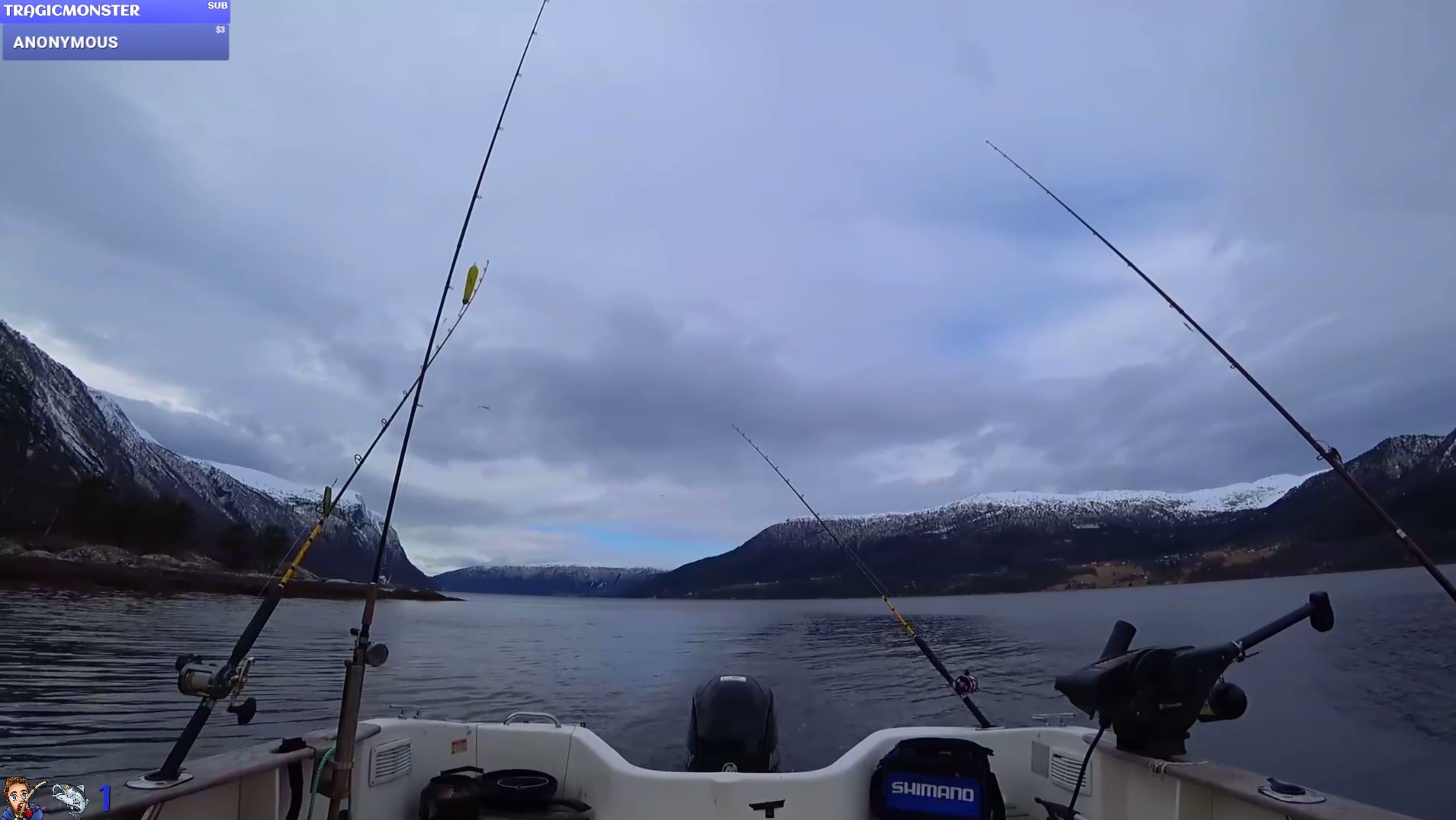 A view from a fishing boat in Norway is probably as close as non-tingleheads can get to ASMR. “Welcome aboard,” Mythrade tells you as you join him in the comments and lose yourself on a placid lake, while commenters reminisce of breakfast omelettes and our host dreams of pancakes. Will there be a fish? Will it rain? Will it raid? By the time you’ve immersed yourself in the boat, an ad interruption from BUFFALO WILD WINGS!! is an assault on the senses and makes Mythrade’s sun-drenched plate of eggs, meat, and bacon that much more exquisite. As drone footage projects eerie visions of abandoned city streets, this channel is running 24/7 prerecorded dashcam footage of a year’s cross-country travel from a camper van, titled: “come pretend you’re not socially isolating.” America doesn’t necessarily look better as expressways and skies littered with fast food billboards, set to EDM, nor does watching traffic ebb and flow quell feelings of isolation. It’s almost as eerie as the empty streets: watching people move from A to B at a time when no one knows where we’re going next. 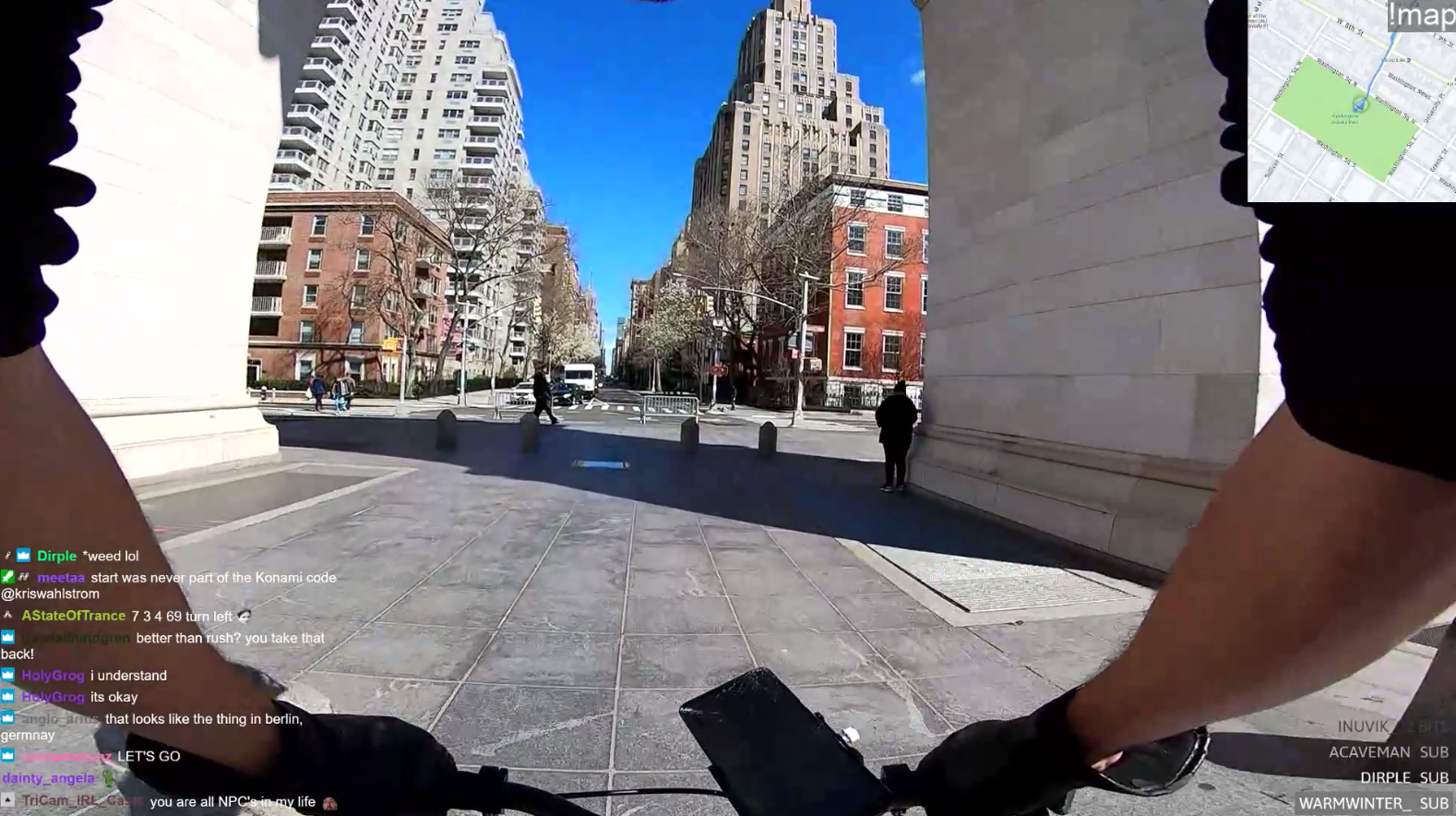 This is Michael the 26-year-old NYC bike messenger, who might never become the city’s mascot (the politics of New York City’s three-way cold war between pedestrians and motorists and bicyclists are divisive enough before factoring in livestreaming), but embraces the workday with verve and Queen. Viewers from around the globe recently tuned in to watch him make his rounds, as he remarked on how strange it was to cruise through the typically gridlocked 6th Avenue West Village intersection (he actually loves the crowds, he says), and to not see any queues for anything.

And then he rode on, as he does.