Extremely Weird Bird Hybrid Is Back and Looking to Bone

Last autumn, the birdwatching community was shocked by the appearance of a small yellow bird. Birder Matthew Grube first spotted it off of a trail near Riverside, California in the US, noting that it looked like a hybrid of two birds from different taxonomic families. This perplexing creature has recently returned to the area, and it’s looking to get some action.

Grube’s bird started making the rounds on social media in September. At first glance, it looked like a yellow-breasted chat, a slinking and enigmatic bird that has confused ornithologists for a century. But on closer inspection, this bird wasn’t so easy to ID. Its bill was long and pointy, and it featured stripes across its wings like orioles have. It also had lots of patterning on its back, while chats’ backs are plain.

Birders immediately began to suspect that the bird could be the hybrid result of a chat mating with an oriole. Except not only are they members of different species and genera (the level above species), they’re in different families as well. Orioles are in the Icterid family, with blackbirds and meadowlarks, while chats are in their own family, the Icteriidae. The California bird had distinguishing features of both.

“Because more distantly related species will have much more differentiated genomes, it is more common to find hybrids between sister species or very closely related ones, or at least in the same genus. Inter-genus hybrids occur but are less common,” Cornell postdoctoral fellow Natalia Cristina García told Gizmodo in an email. “Therefore, following current taxonomy, this would be an inter-family hybrid, even more interesting!” 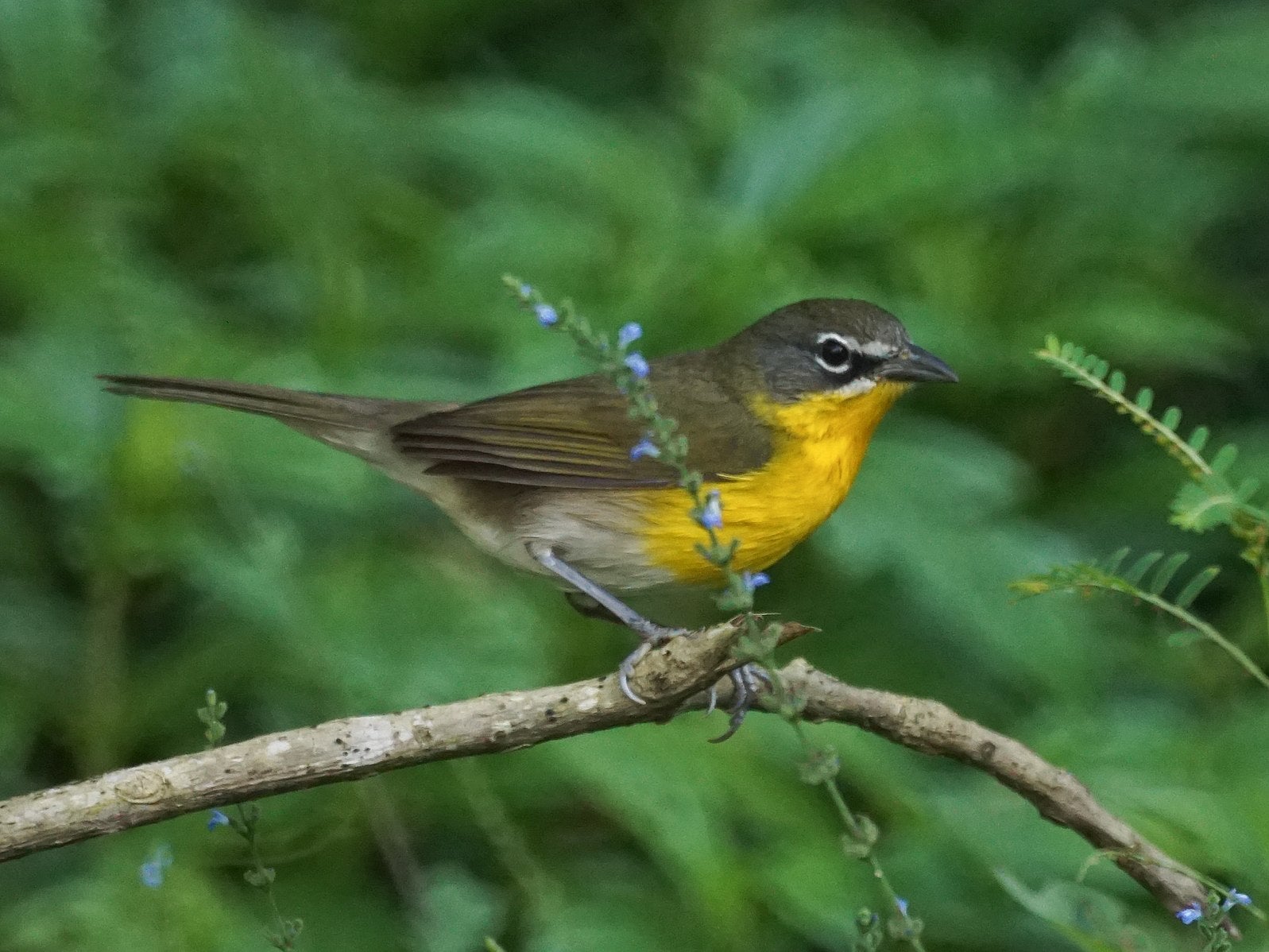 Grube spotted the bird again this past weekend, and it was singing a raucous, chat-like song, but, Grube noted, in a somewhat raspier and coarser voice. Birds sing in order to attract the attention of a mate and defend territory.

One bird biologist I spoke to wasn’t ready to toss around the h-word just yet. “I am very sceptical about the identification of that bird as a chat (Icteria) x oriole (Icterus) hybrid,” Irby Lovette, professor of ornithology at Cornell, told Gizmodo in an email. “Hybrids often do not look like clean 50/50 combinations of their parents, so identifications based on their outward appearance are not always reliable. And the evolutionary distance between those birds is so large that a hybrid would be very unlikely.”

Perhaps the bird is just a very strange chat and not a hybrid at all. But other ornithologists, including San Francisco Bay Bird Observatory’s senior biologist Alvaro Jaramillo, agree with the hybrid theory. I asked Jaramillo whether the bird could simply be a weird-looking chat, and he said that the issue was that the bird had oddities beyond its plumage; its overall structure and bill shape were weird, too. DNA would be the best way to determine the bird’s lineage, he said. 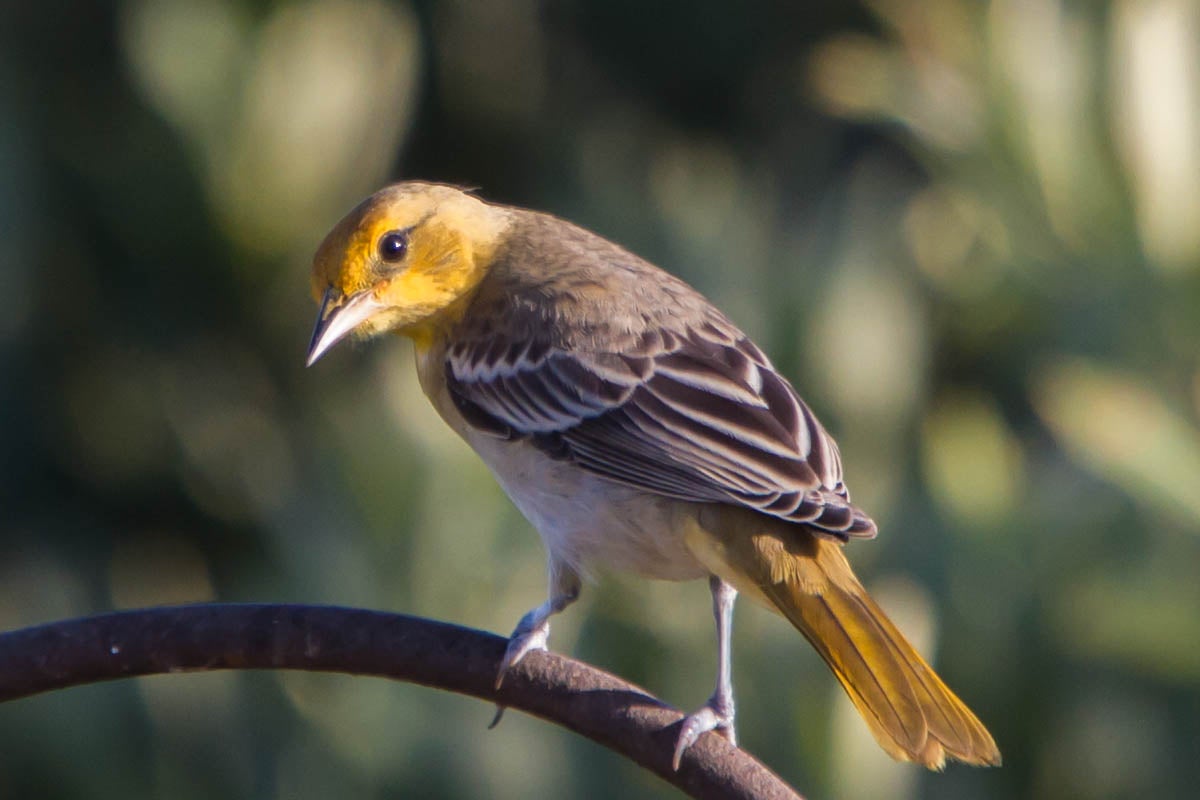 Female hooded oriole, one of the several possible oriole species that could have fallen for the chat. (Photo: Dawn Beattie)

David Toews, assistant professor of biology at Penn State, pointed me toward his tweet where he explained that the appearance of a bird alone can be a difficult way to determine its ancestry. At the same time, he noted that a recent study found that yellow-breasted chats and hooded orioles had a common ancestor less than 10 million years ago, providing a little more evidence of their potential to produce offspring.

The hype surrounding this bird likely comes from the general mysteriousness of at least one of its parents, the yellow-breasted chat. There aren’t a lot of detailed studies of its biology, according to Cornell’s Birds of the World, in part because it lives in thick, brushy habitat that’s difficult for humans to access. Chats were once put into the same taxonomic family as the colourful New World warblers, but their larger size and behaviour made it an obvious ugly duckling in the group. In 2017, ornithologists agreed that the chats belonged in their own family. Some even think that the bird belongs in the Icterid family with the orioles anyway.

Scientists including Alan Brelsford, a University of California, Riverside assistant professor of biology, were out visiting the bird this past weekend, where it happens to be hanging out with a (less-shocking) hybrid hummingbird. At present, they’re trying to figure out how to proceed and whether they can catch the bird to take a DNA sample – the chat is a species of special concern in California, and it’s unclear how protective regulations would apply to a hybrid, Brelsford told Gizmodo in an email.

Now that the suspected hybrid has returned, perhaps scientists will be able to solve the mystery of its parentage, as well as the long-standing puzzle of where chats belong on the evolutionary family tree. After all, if this specimen really is a hybrid between a chat and an oriole, then it further suggests that chats might be more closely related to icterids than previously thought.