Giant Concrete Umbrellas Could Protect the Lucky Ones From Storm Surge

A group of engineers from Princeton University think that giant concrete umbrellas could help deflect storm surge and rising seas. In a new study published this month in the Journal of Structural Engineering, the researchers laid out preliminary designs for these structures.

As sea level rise threatens to force millions of people to flee coastal areas, the innovative project comes at an important time. But ultimately, “site-specific” proposals like this that only protect small coastal areas won’t alone be sufficient means to adapt to more severe storm surges and sea level rise that put the entire coastline at risk.

The engineers who authored the study drew up designs for massive umbrellas made of four inch thick slabs of reinforced concrete that curve inward along one axis and outward along the other. The proposed structures would serve two purposes. On sunny days, the 10-foot-tall structures could provide shade for beachgoers. During storms, sensors in the structures would automatically cause their tops to tip forward, creating a 26-foot-tall seawall to shield the shore from rising water levels. The researchers also plan to investigate the potential of incorporating systems for the structures to capture solar energy and stormwater.

To see how effective the structures would be at protecting beaches from coastal storm surges, the researchers compiled storm data from hurricanes between 1899 and 2012 along the US East Coast. They then then modelled a storm surge height of 18 feet, based on all but the highest storm surges in the data set.

“This seems like a very smart proposal,” Peggy Deamer, architect and founder of the Architecture Lobby, said in an email to Gizmodo. “Having said that, it is clear that universities should also take the lead in solving the cause of the problem...and not just managing its symptoms.”

The researchers say the proposal is an “innovative solution to coastal armouring against nearshore hazards.” But the unique design might not be enough to protect coastal communities behind the seawalls, let alone those without defences.

“Seawalls tend to become obsolete quickly because...sea level rise keeps coming faster and faster,” Daniel Aldana Cohen, a sociologist and director of the University of Pennsylvania’s Socio-Spatial Climate Collaborative, told Gizmodo. “So there’s a risk of even higher storm surges net of the fact that the sea is starting at a higher level.” 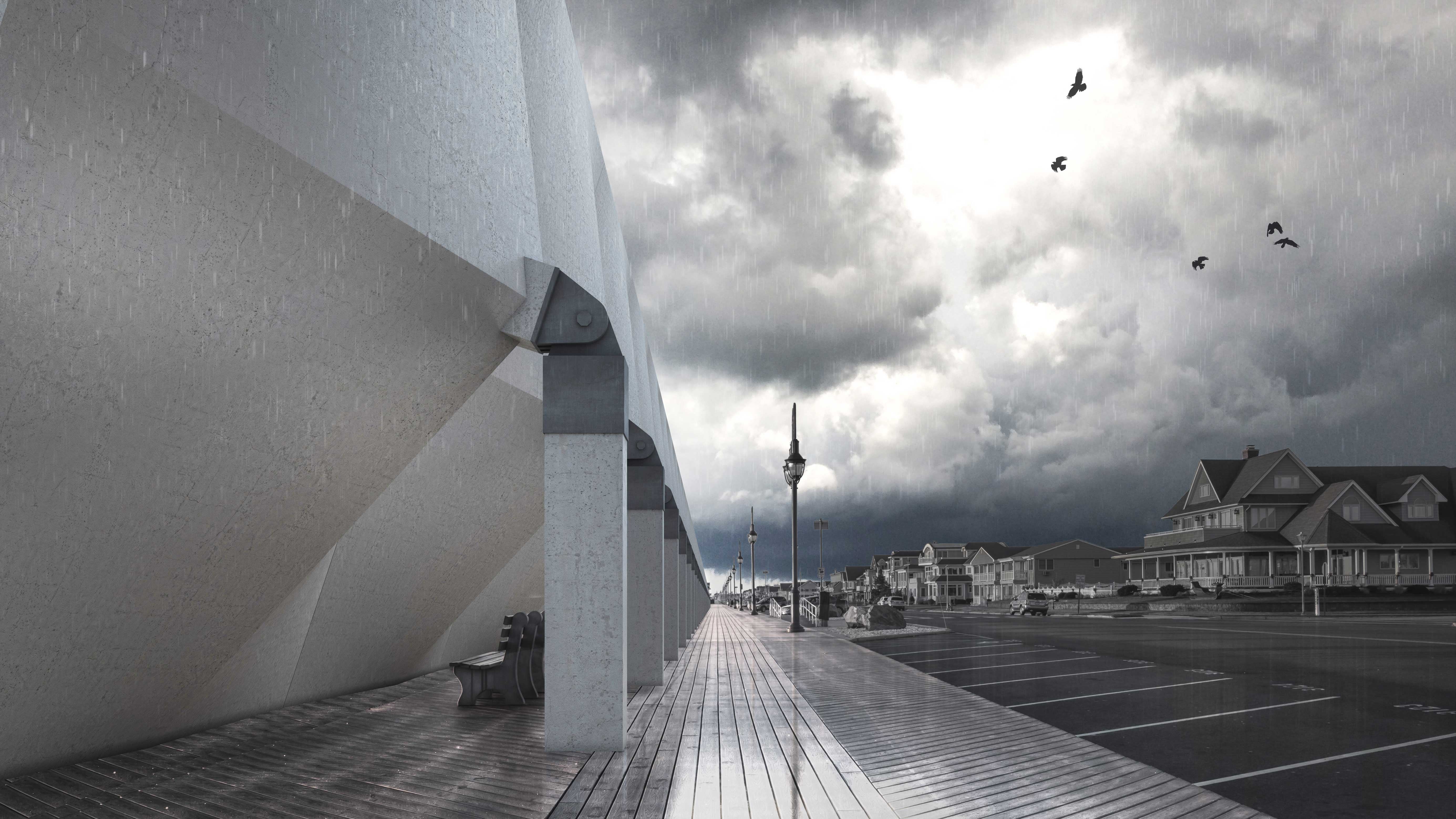 The researchers calculated that the proposed umbrellas would remain stable when faced with a wall of water about 75% of their deployed height of 26 feet. (Image: Mauricio Loyola/Princeton University)

Due to the climate crisis, ice is melting and oceans are warming, which both push sea level up. At the same time, climate change is making storms more intense. The combined effects can make it difficult for seawalls to provide effective protection.

When they are deployed, the seawalls could come with risks. If the ocean rose higher than the structures, water could pool behind them with deadly consequences. And even when they do successfully block the sea, that water would still need somewhere to go and would inevitably inundate other communities. Both of these effects, Aldana Cohen said, caused problems during Hurricane Sandy in Staten Island, New York.

“A lot of new developments that had a basically a harder infrastructure quality ended up splashing water onto adjacent places and flooding them more,” he said. “So with this project, if you imagine this as a defence of one beach, even if it’s successful, it’s going to probably cause more flooding...next door.”

For their part, the authors say they’re working to prevent this effect. “Just as in the design of seawalls and other flood prevention structures, consideration needs to be taken to not exacerbate the problem elsewhere,” co-author Maria Garlock told Gizmodo in an email.

Large, dazzling projects like this have a tendency to garner excitement from techno optimists and firms interested in supporting construction projects to turn a profit. But in a certain sense, Aldana Cohen said, our interest in what he calls “charismatic mega-infrastructure” is part of what made us vulnerable to storm surges in the first place.

“Like in New Orleans, when Katrina happened, decades and decades of dredging to widen the shipping channels, made the city nine times more vulnerable to the storm than it would otherwise have been,” he said.

There are less flashy ways to soften flooding during storm surges, such as constructing manmade sand dunes, restoring marshes and wetlands, and, of course, retreating from shores which are at risk of being swallowed by rising coasts. They have their challenges and their detractors – beachfront property owners, for instance, have waged lawsuits over sand dunes blocking their waterfront views – but there’s ample evidence that they all work, and they’re often cheaper than their more dramatic counterparts.

This doesn’t mean the proposed giant concrete umbrellas are necessarily a bad idea, or that there aren’t times when seawalls can be used effectively. But ultimately, the construction of physical structures like these won’t be enough to shield us from the ever-worsening threat of sea level rise. The less dazzling solutions need to play a role, as do efforts to rapidly draw down carbon emissions to solve the root cause of the problem.