What do your bumhole and a snowflake have in common? Turns out no two of these are the same, allowing this “smart toilet” to differentiate your sphincter from others. By doing so, this toilet can monitor changes to your health over time and flag signs of disease.

New research published in Nature Biomedical Engineering describes a mountable toilet system that’s capable of monitoring a person’s health by analysing their urine and poo. The system is modular, and its various gizmos can be fitted onto standard toilets, according to the team behind it. As a person does their business, the system works silently in the background, scanning their biological waste and then uploading the data to the cloud.

The senior author of the new paper, Sanjiv Gambhir from Stanford University, said the system is particularly effective in that it allows for continuous health monitoring.

“The thing about a smart toilet... is that unlike wearables, you can’t take it off,” said Gambhir in a press release. “Everyone uses the bathroom – there’s really no avoiding it – and that enhances its value as a disease-detecting device.” 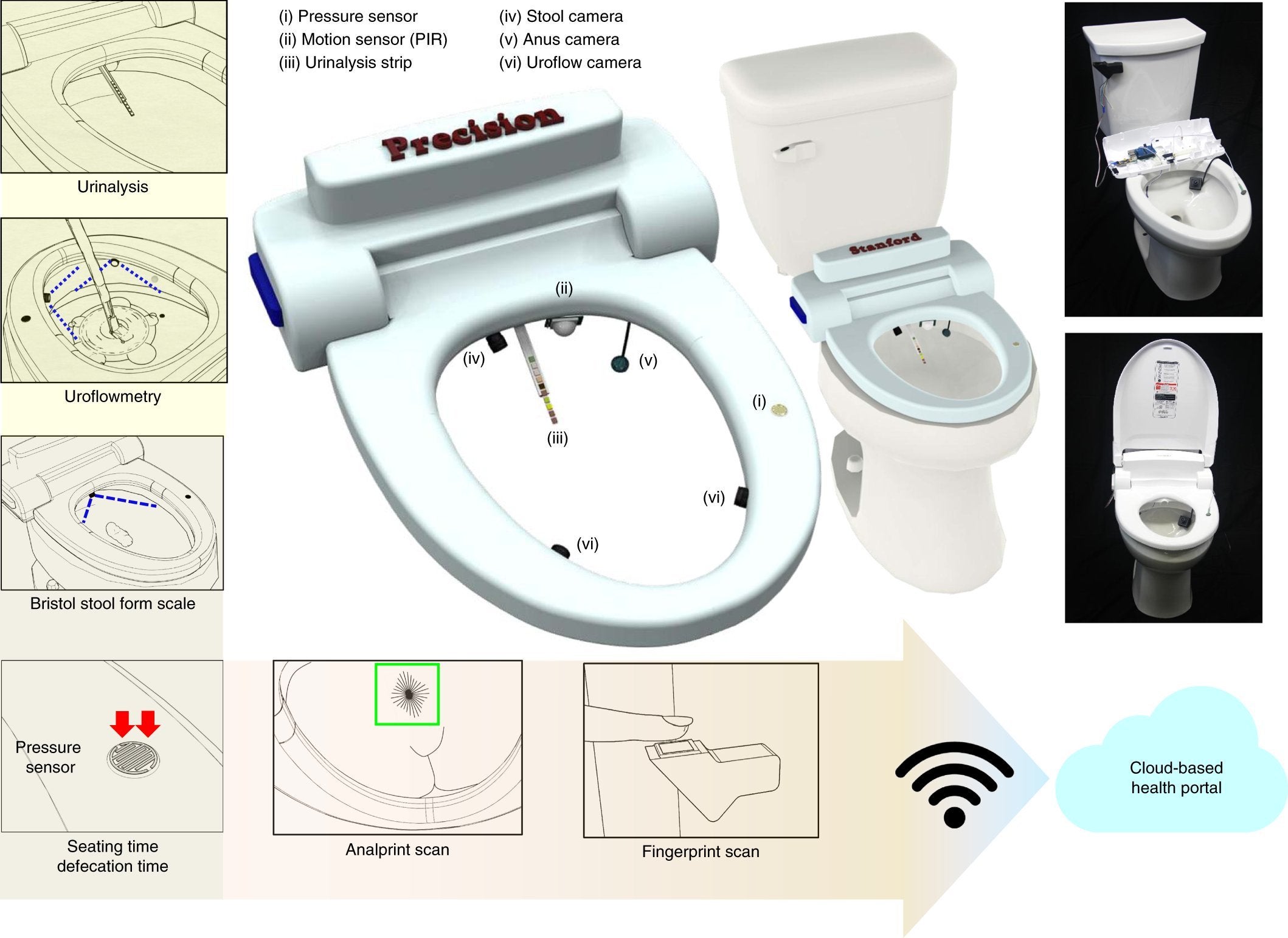 Of course, toilets are typically used by more than one person, so the device needs to be able to discern one user from another. To that end, Gambhir and his colleagues fitted the system’s flush lever with a fingerprint scanner. Not content to stop there, the scientists added a camera that sits inside the bowl. Powered by machine learning, this camera identifies people by remembering their idiosyncratic bumholes.

Mercifully, neither the toilet user nor a medical professional will ever see these sensitive scans, the scientists say. Privacy assurances aside, it’s hard to imagine many people would be willing to install any kind of camera in their toilet.

These two identification measures allow the system to match a person’s biological waste to their individual dataset. By tracking this data over time, the system could alert healthcare professionals to potential problems, such as early signs of a disease. And unlike conventional systems, the smart toilet could generate actionable data and be integrated within pre-existing clinical infrastructures.

Pressure and motion sensors on the system track the onset and duration of toileting sessions. Optical scans, powered by machine learning, classify plops of poo by referencing a centralised database, which considers such things as consistency or liquidity, for example. Dipstick test strips enable urine analysis, such as rate of flow and biochemical tests that track white blood cell counts, signs of blood contamination, problematic levels of protein, and other biomarkers.

These measures can be used to detect a variety of disease markers in poo and pee, from common ailments like bladder infections to more serious conditions like kidney failure. The system could also detect signs of certain cancers, such as colorectal and urologic cancers, and provide a way for people with genetic conditions, like irritable bowel syndrome of prostate cancer, to monitor their health.

The toilet sends this data to a secure cloud-based system for storage. Ultimately, Gambhir and his colleagues would like to make this data available to healthcare providers, who would be alerted to a patient’s emerging health issue. Importantly, the smart toilet is not meant to replace diagnoses made by actual doctors.

This concept was recently tested on 21 participants over the course of several months. A total of 10 different biomarkers were used in this proof-of-concept study, which used both sitting toilets and urinals. The modular system passed the initial sniff test, and a larger clinical study now represents the next phase in the project, in which the researchers can better test the efficacy and accuracy of the smart toilet.

The scientists are also hoping to improve the system over time as more data is added, including data derived from larger subsets of human populations. They’re also hoping to design toilets that can be catered to a user’s specific needs, such as diabetes patients who need to monitor their glucose levels. The scientists would also like the system to do biochemical analyses on the stool, but that presents a tougher technological challenge, according to the researchers.