Human evolution was messy, with multiple human species living and interbreeding at the same time, in a convoluted process that eventually led to us. Such is the emerging narrative in anthropology, and it’s a theory now bolstered by three fascinating new studies.

Not too long ago, anthropology and archaeology students were told that modern humans, formally known as Homo sapiens, could trace their evolutionary origins back in time by following a tidy, linear chain of ancestral species. Much of this thinking had to do with the paltry amount of available palaeontological and archaeological evidence, but it also had to do with simplistic and biased views of biology, in which human evolution was equated with a steady march of progress.

Scientists who study human evolution don’t think like this anymore. Our origin story is turning out to be more complicated – and far more fascinating – than these now-antiquated narratives.

Three new science papers released last week are affirming this view of human origins, providing evidence of overlapping groups of ancient, or archaic, human species, some of whom exhibited physical characteristics consistent with what we see in modern humans living today. While the search for a single ancestral species remains a noble quest, the new evidence speaks to the important role played by contemporaneous sister-species and sister-groups and the exchanging of fortuitous genetic material. 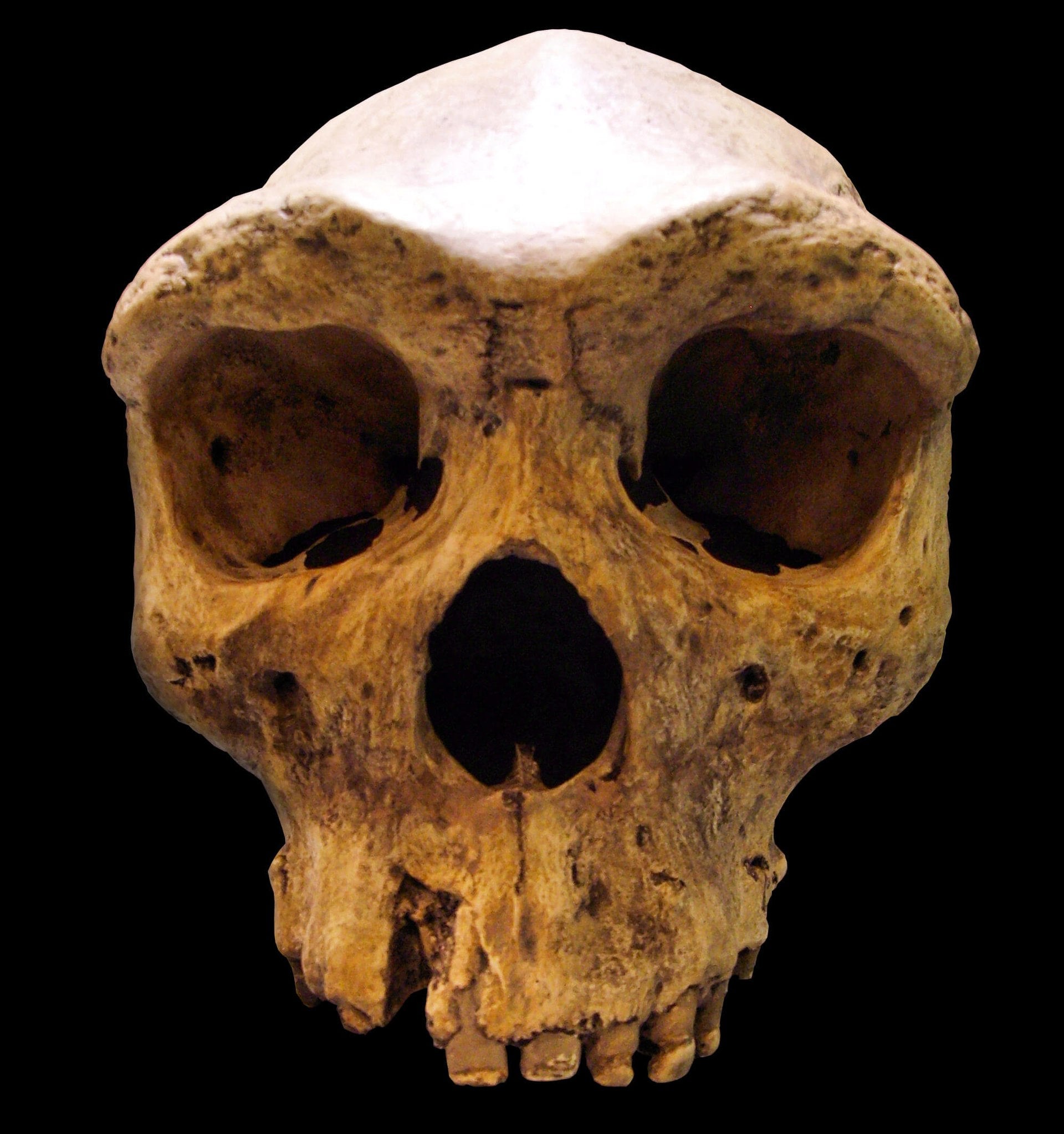 In a new Nature paper co-authored by Chris Stringer from the Natural History Museum in London and Rainer Grün from Griffith University in Australia, a hominin skull found buried in a Zambian cave back in 1921 has been re-analysed and given a new age of 299,000 years old, give or take about 25,000 years. Known as the Broken Hill skull, it’s about 200,000 years younger than the previous best estimate.

If the new dating is correct, “then like other human species, heidelbergensis lasted for at least several hundred thousand years,” said Stringer in an email to Gizmodo.

Scientists had struggled to date the Broken Hill skull owing to the absence of sedimentary material from the original site in Zambia, which was eventually destroyed and turned into a quarry. The researchers used direct uranium series dating on the skull to come up with the revised date. They also analysed material that had been scraped off the skull years ago and promptly misplaced. Stringer said this “thin mineral coating” was only recently discovered in the London Natural History Museum’s mineralogy collection, not in his department’s collection “where we had been looking for years,” he told Gizmodo.

The revised date is exceptionally intriguing for a number of reasons. In addition to revealing H. heidelbergensis/rhodesiensis as a long-lived species, the new dating coincides with the emergence of early modern humans, who debuted during the Middle Stone Age some 300,000 years ago.

Palaeoanthropologist Katerina Harvati from Eberhard Karls University of Tübingen said the Broken Hill skull doesn’t appear to display any special, or derived, features that would later appear in early modern humans, “so this makes it less likely that it is a direct ancestor” to modern humans. That said, and as the authors point out, H. heidelbergensis/rhodesiensis “could actually represent a late survival of an earlier taxon ancestral to early Homo sapiens,” said Harvati, who wasn’t involved with the new research.

The new dating also makes it unlikely that H. heidelbergensis/rhodesiensis was the last common ancestor of Neanderthals and modern humans, as these species appear to have diverged some 800,000 years ago, but that can’t be ruled out, either.

The new date points to the presence of multiple human species living at roughly the same time, as the Natural History Museum in London describes in a press release:

It is now looking like Africa and Eurasia were inhabited by a whole range of hominin species just a few hundred thousand years ago. While H. naledi was living in South Africa, H. heidelbergensis was surviving in South-Central Africa, and H. sapiens was emerging in Morocco and Ethiopia.

At the same time as all this, H. neanderthalensis was evolving in Europe, the Denisovans were developing in Asia, H. erectus may still have been clinging on in Indonesia, and two diminutive hominins, H. floresiensis and H. luzonensis, were living the island life in Southeast Asia.

This is all sorts of incredible and illustrates the complexity and diversity of the human fossil record from the Middle Stone Age. As Harvati explained, the new finding is “consistent with the emerging picture from the fossil record and from paleogenetics that several species coexisted for a long time across the vast expanse of the African continent, variously contributing to the origins of modern humans, not only directly as ancestral populations, but also through interbreeding with surviving archaic human species.”

A second paper, also published last week in Nature, investigates another archaic human species: Homo antecessor. The new research, led by Frido Welker and Enrico Cappellini from the University of Copenhagen, shows that H. antecessor, who lived between 2.5 million and 770,000 years ago during the Early Stone Age, is a close relative to modern humans and Neanderthals, as previously suspected. 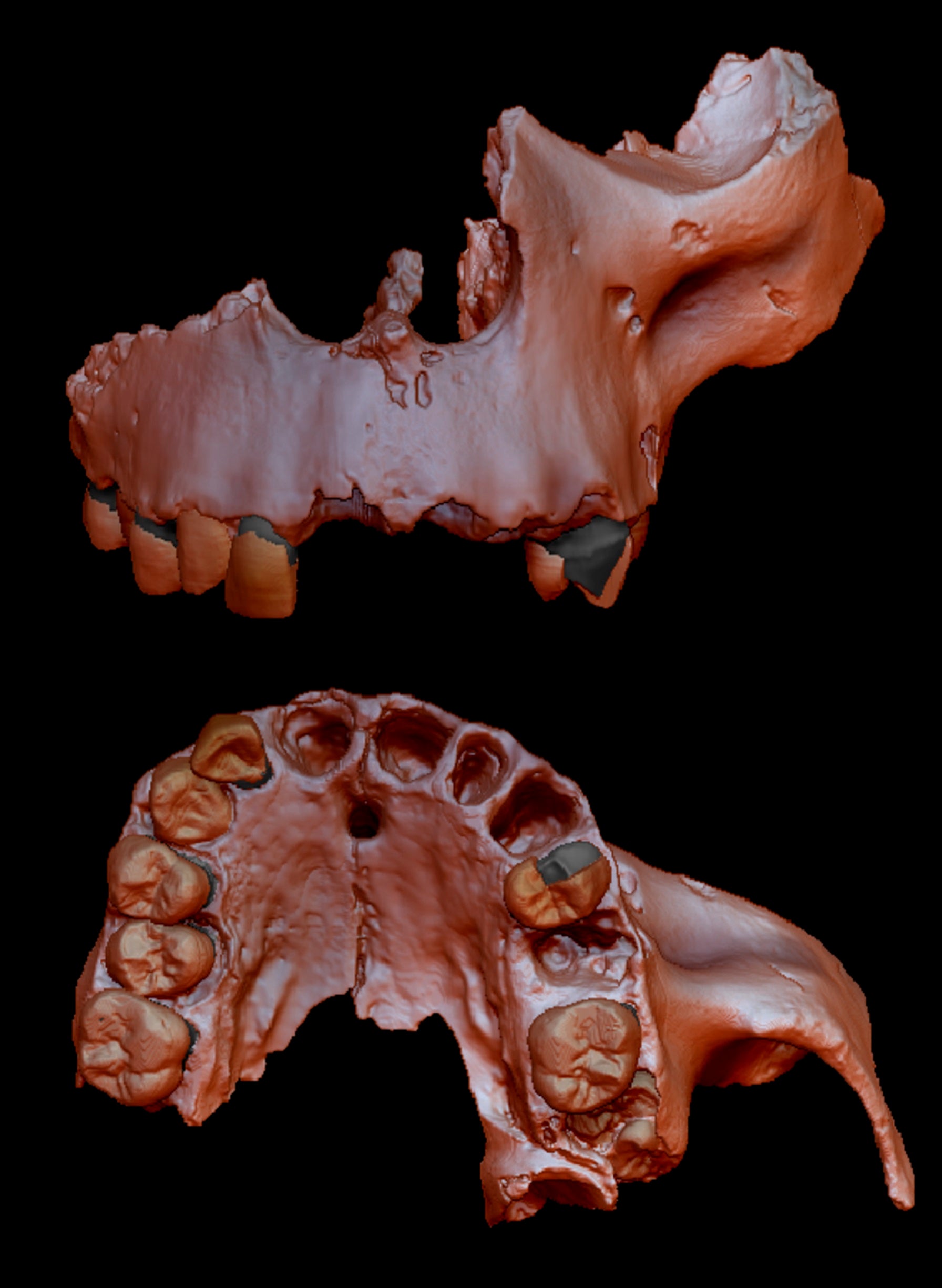 For the study, the researchers completed a protein analysis by scanning the dental enamel from an H. antecessor specimen found in Spain back in 1994 and dated to between 949,000 and 772,000 years old. This protein analysis provided an indirect way of studying DNA, which couldn’t be recovered due to the specimen’s extreme age. The researchers found that certain facial features seen in H. antecessor were retained in early modern humans, as well as Neanderthals and Denisovans. This would imply an important role for H. antecessor in the ultimate evolution of these later hominins.

The new study “provides evidence that the Homo antecessor species may be closely related to the last common ancestor of Homo sapiens, Neanderthals, and Denisovans,” said José María Bermúdez de Castro, a co-author of the study and a researcher at University College London, in a press release. Facial features shared by these hominins “clearly appeared much earlier than previously thought,” he said, which means H. antecessor could be a kind of “basal” species to the “emerging humanity formed by Neanderthals, Denisovans, and modern humans.”

Harvati said it was “wonderful” that the study authors were able to do a protein analysis on such an ancient specimen, as this has been one of the “major shortcomings of palaeogenetics,” she said. Nevertheless, she’s not certain the authors actually provided new insights into the relationships between these hominins.

Ideally, Harvati would like to know how H. heidelbergensis/rhodesiensis fits into this picture, and whether it is also closely related to the last common ancestor or to Neanderthals, for example. “I think we haven’t solved the puzzle yet,” she said.

In the third study, published in PLOS One, Debra Bolter from Modesto Junior College in the US state of California, along with her colleagues, studied the partial skeleton of a juvenile Homo naledi – an archaic hominin discovered in South Africa just seven years ago. Most hominin fossils come from adults, so the opportunity to study the bones of an young individual is quite special and rare.

“Immature remains are critical for understanding how an extinct species matured,” explained Bolter in an email to Gizmodo. “Partial immature skeletons reveal the combination of baby and adult teeth, and the timing of their eruptions with the skeletal fusion of growth plates in the long bones and pelvis of the body.”

By studying these growth patterns and comparing them to other extinct species, scientists can reconstruct the evolutionary pressures that led to certain adaptations, along with changes to our own species’ developmental processes, said Bolter.

The newly analysed skeleton, named DH7, consists of some arm and leg bones and some teeth. The specimen was found in the Dinaledi Chamber of the Rising Star Cave System in South Africa.

Analysis of DH7 showed a mix of growth patterns seen in both archaic hominins and early modern humans. The new findings, however, are only a starting point. Future studies will have to match more skeletal bones with dental remains and find an accurate way of determining the age of death. An archaic hominin fossil might look like it died at a certain age when compared to human anatomy, but differences in the rate of growth could throw these estimates way off.

“Future work may include techniques to age a fossil at death, like microhistology on developing dentition, to help us determine if Homo naledi is more human-like in its timing of development” and whether this specimen “died at an age of 11 to 15 years, or is more primitive, and died at an age between 8 to 11 years,” said Bolter.

Intriguingly Homo naledi lived during the Middle Stone Age some 335,000 to 236,000 years ago, which coincides with modern humans. Accordingly, they could be a sister species to our own.

“Understanding whether the two species shared features like pace of maturity may help us understand similarities in their adaptations or perhaps provide clues as to why one species survived, and the other went extinct,” Bolter told Gizmodo.

We now know there was no “Garden of Eden” in Africa, as the entire African continent served as the proverbial garden from which various human species emerged. We just happen to be the last ones standing, for reasons that still aren’t clear. That said, these extinct hominins continue to live on in our DNA, and we can thank them for their genetic gifts, many of which undoubtedly contributed to our ongoing survival.