Photography can be a fantastic creative outlet (and time-killer) for kids if you’ve got the right equipment. A camera they can’t easily break is a must, as is a way to easily print out their prized shots. Most instant cameras rely on pricey film stock, but the myFirst Camera Insta 2 uses cheap rolls of thermal paper to create near-instant prints that are easy to share.

As far as cameras targeted at a younger demographic go, the myFirst Camera Insta 2 brings some decent specs for $100 (£81). It’s not going to replace your mirrorless Sony, but it boasts 12-megapixels for still shots and full 1080P resolutions for video. Its housing is made from ABS plastic wrapped in soft silicone so while it won’t withstand everything, the occasional drop, ding, or toss shouldn’t break it. 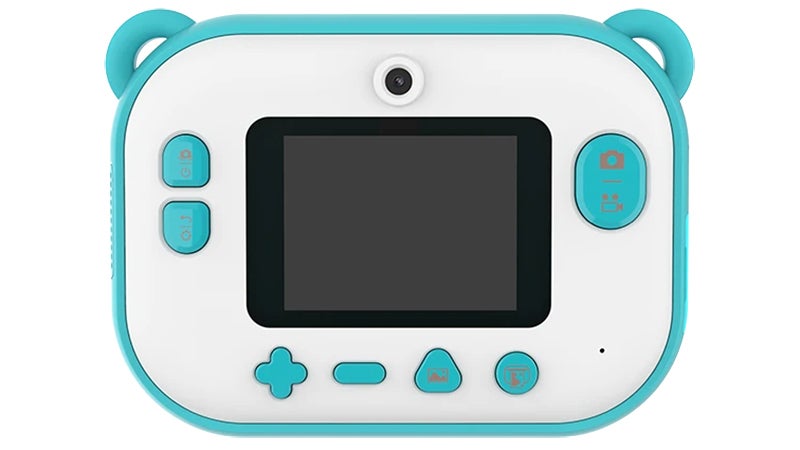 Simple graphics on the controls mean kids can probably figure out how to use this camera all on their own. (Photo: Oaxis)

A 2.4-inch LCD display is the only way to preview shots as the camera doesn’t have any kind of optical viewfinder, but it does include an additional lens and sensor on the back (which is presumably lower quality) for snapping selfies; a fad, we’ve been told, the kids are still into.

A quick eBay or Gumtree search will return hundreds of used point and shoot cameras for sale that can outperform what the myFirst Camera Insta 2 can do, and probably at much lower prices, but the device’s real appeal is its built-in printer. The cheapest Polaroid instant film you can buy will set you back £1.50 for every shot you take, and while alternative papers like Zink are cheaper, kids can be notoriously shutter-happy and burn through printed photos faster than most parents would expect.

The myFirst Camera Insta 2 trades instant film and proprietary coloured thermal paper for the same stuff that cash registers spit out en masse: simple black and white thermal paper. The camera comes with three rolls that can be used to print roughly 80 photos each, and we’re hoping it’s a standard-sized roll so that replacements can be purchased in bulk just like your local supermarket does. The camera’s even got a strip of serrated teeth for tearing printouts off; its creators aren’t trying to pretend that the images it creates are suitable for framing. It’s a cheap way to let kids easily create printed photos, and while some might complain that the images are only black and white, you can always point out how that just makes their blurry, poorly framed shots look more avant-garde and edgy.