It looks like the Death Star’s laser cannon, but this proposed lunar telescope – built inside a natural crater on the Moon’s far side – could be used to peer back into the earliest days of the cosmos.

Earlier this month, NASA awarded additional funding to a host of projects in its Innovative Advanced Concepts (NIAC) programme, in which contributors are encouraged to pitch out-of-the-box ideas meant to “change the possible.”

Some of the more interesting proposals included a solution for exploring the subsurface ocean of Jupiter’s moon Europa, instant landing pads for the upcoming Artemis mission to the Moon, and a fascinating pitch to use antimatter as a way of slowing down interstellar spacecraft en route to exoplanet Proxima Centauri b (like I said: high-concept ideas).

One of the more intriguing proposals is from from JPL roboticist Saptarshi Bandyopadhyay, who wants to build a telescope inside a natural crater on the far side of the Moon. He calls it the Lunar Crater Radio Telescope (LCRT). NASA has awarded this project Phase 1 status and given the team $120,000 (£95,800) to move the idea forward. Should Bandyopadhyay and his colleagues produce a convincing proposal, the idea would advance to the second of three phases, so this project is by no means a done deal.

“The objective of NIAC Phase 1 is to study the feasibility of the LCRT concept,” Bandyopadhyay told Gizmodo. “During Phase 1, we will mostly be focusing on the mechanical design of LCRT, searching for suitable craters on the Moon, and comparing the performance of LCRT against other ideas that have been proposed in the literature.”

In terms of when such a structure could be built, he said his team would have a better idea once Phase 1 is complete. But wow – what an amazing thing this would be if it is actually built.

Diagram showing the position of LCRT relative to the Earth (not to scale). (Image: Saptarshi Bandyopadhyay)

LCRT would be an ultra-long-wavelength radio telescope capable of capturing some of the weakest signals travelling through space.

“It is not possible to observe the universe at wavelengths greater than 10 meters [33 feet], or frequencies below 30 MHz, from Earth-based stations, because these signals are reflected by the Earth’s ionosphere,” said Bandyopadhyay. “Moreover, Earth-orbiting satellites would pick up significant noise from Earth’s ionosphere,” which is why “such observations are very difficult.”

It’s for this reason that wavelengths greater than 10 metres have yet to be explored by scientists. Consequently, this telescope would be a tremendous boon to astronomers and cosmologists, who would use it to study the early universe as it existed some 13.8 billion years ago, including the formation of the earliest stars. 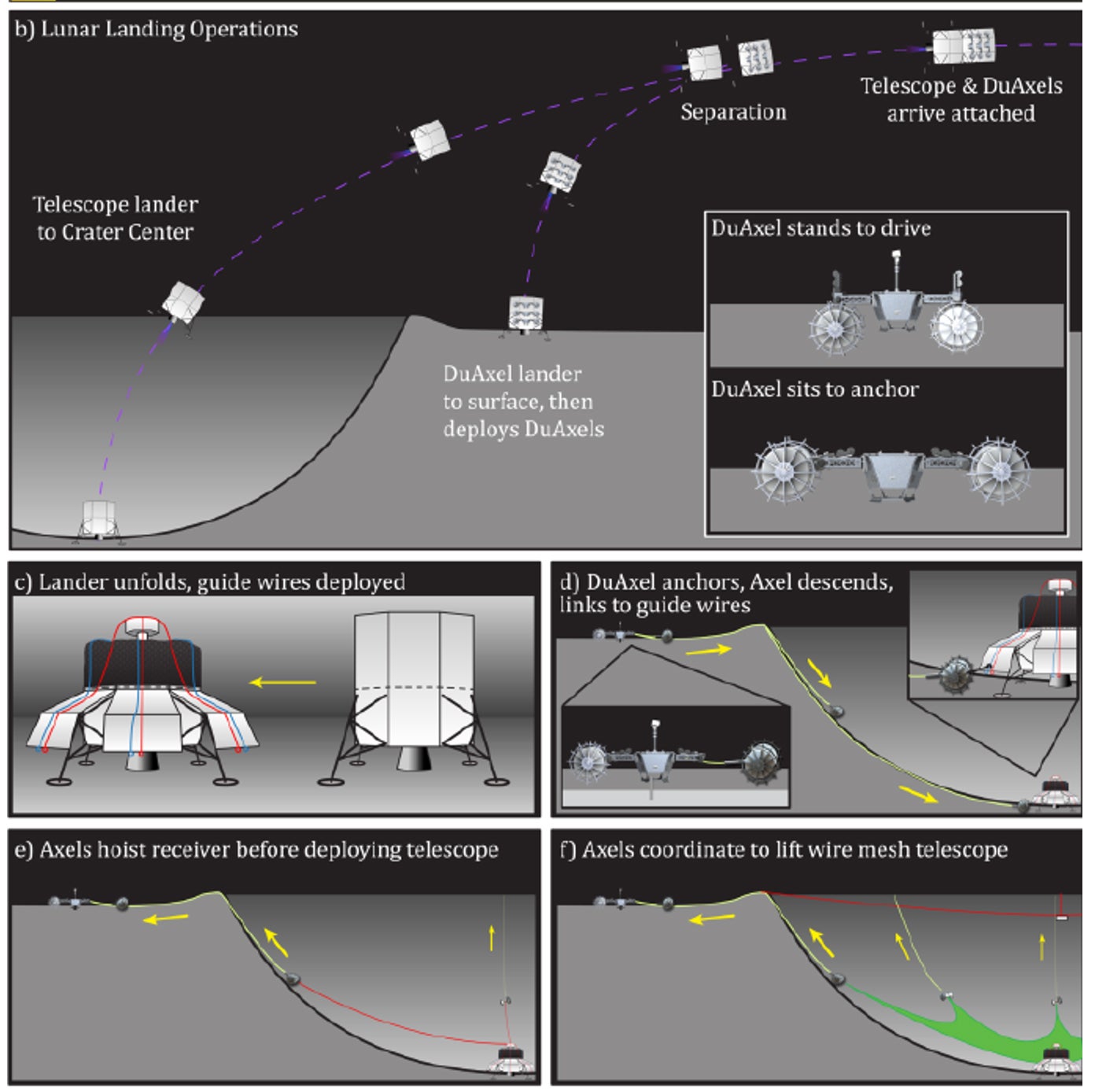 How the LCRT would be built. (Image: Saptarshi Bandyopadhyay)

By placing the LCRT on the far side of the Moon, the observatory would be protected from radio interference and other annoyances coming from Earth, whether natural or artificial.

“The Moon acts as a physical shield that isolates the lunar-surface telescope from radio interferences/noises from Earth-based sources, ionosphere, Earth-orbiting satellites, and the Sun’s radio-noise during the lunar night,” explained Bandyopadhyay.

The DuAxel robots “are awesome and have already been field-tested in challenging scenarios,” Bandyopadhyay told Gizmodo. JPL roboticist Issa Nesnas has led the design of these robots over the past decade, and he, along with JPL roboticist Patrick Mcgarey, are also working on the LCRT project.

When asked how much technology still needs to be developed for this proposal to be possible, Bandyopadhyay said “quite a lot,” as most of the tech needed for LCRT is currently at a low technology readiness level, in NASA terms.

“I don’t want to go into specifics, but we have a long road ahead,” he said. “Hence we are very thankful for this NIAC Phase 1 funding!”