In the three years since ‘Oumuamua visited our solar system, scientists have struggled to explain some of its more enigmatic features, including its cigar-like shape. State-of-the-art computer models are providing some tantalising new clues, showing how the object likely formed and how it became an interstellar interloper.

New research published this week in Nature Astronomy suggests interstellar object ‘Oumuamua is the contorted fragment of a parent body that ventured too close to its host star. This process, in addition to producing ‘Oumuamua’s elongated shape and other distinctive features, also resulted in the object’s ejection into interstellar space, according to the new paper, authored by Yun Zhang from the University of Côte d’Azur and Douglas Lin from the University of California, Santa Cruz in the US.

First spotted on 19 October 2017 by the Panoramic Survey Telescope and Rapid Response System 1 (Pan-STARRS1), ‘Oumuamua is the first interstellar object ever detected by astronomers. Aside from its origin in another star system, the object was found to possess several idiosyncratic features, including an elongated shape, a practically non-existent comet-like coma, and a slight rate of acceleration not caused by gravitational forces. 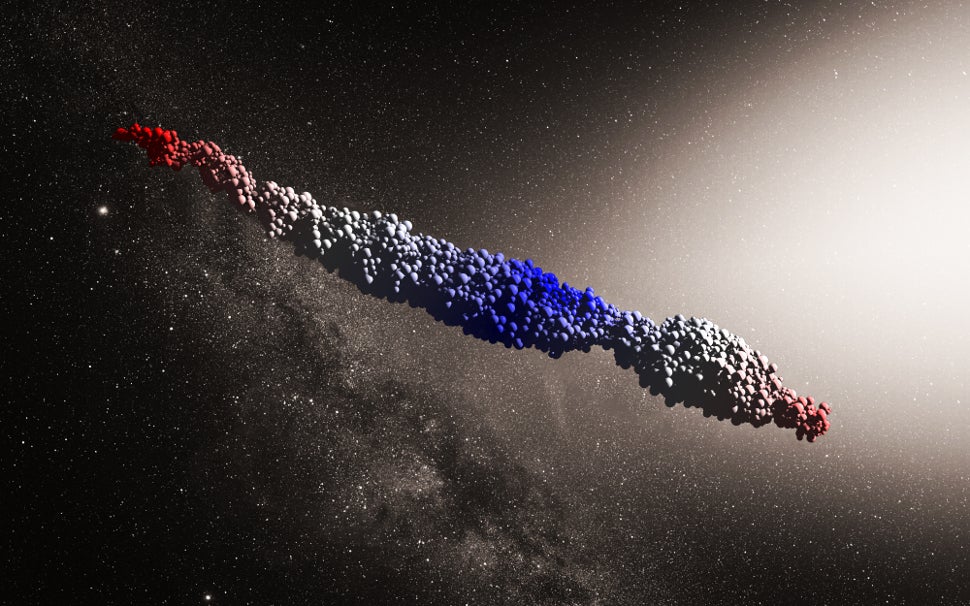 That ‘Oumuamua is more like an asteroid than a comet is a particularly vexing observation. A conventional theory about interstellar objects is that they’re icy bodies that were tossed out into interstellar space due to gravitational interactions, and they originate from the outer reaches of a star system (similar to the Oort cloud in our own solar system). But ‘Oumuamua is no comet, featuring a dry surface and an apparent absence of volatiles (compounds, like water, that easily switch between states of matter).

“The discovery of ‘Oumuamua implies that the population of rocky interstellar objects is much larger than we previously thought,” said Zhang in a press release. “On average, each planetary system should eject in total about a hundred trillion objects like ‘Oumuamua. We need to construct a very common scenario to produce this kind of object.”

The tidal fragmentation scenario, as Zhang and Lin call it, provides an elegant solution backed by computer models that simulated the structural dynamics of a parent object as it strayed too close to its host star. As the models showed, a parent object like a planetesimal (an embryonic planet) or even a terrestrial, Earth-like planet, that ventures to within a few hundred thousand kilometres of its host star will start to distort – and distort very badly. 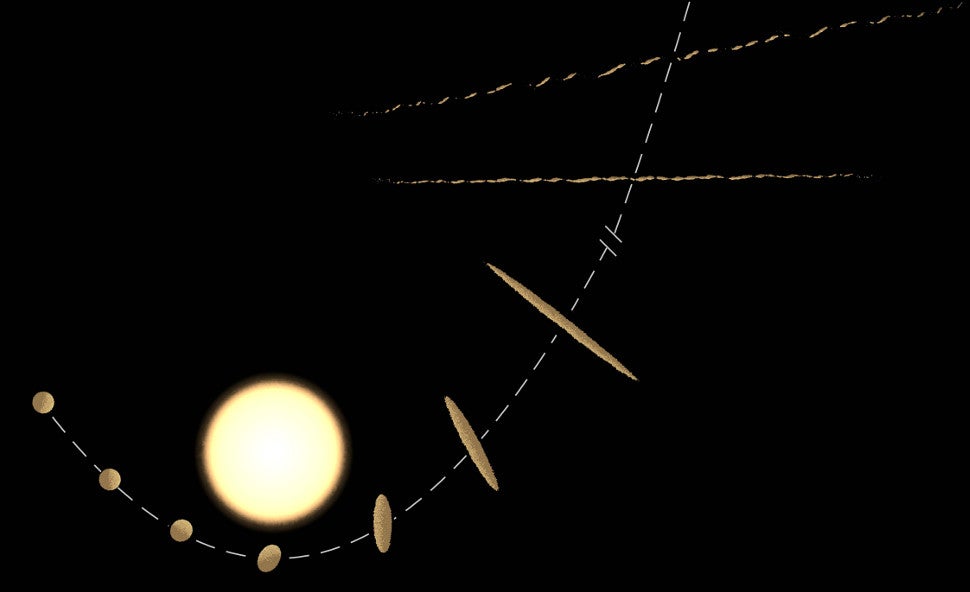 The process is akin to making a super-thin snake from a ball of clay. As the clay gets progressively thinner, smaller chunks start to shred off, with each of the bits still retaining their elongated shape.

In the case of ‘Oumuamua and other nascent interstellar objects, the hot, elongated fragments are quite malleable, consisting of a jumble of tiny pieces. As this loose collection of material ventures farther away from its host star, the bits rapidly start to cool and congeal to one another, forming a crust that defines the ultimate shape and structural integrity of the object. The ratio of the long axis to the short axis can be as much as 10:1, according to the computer models.

When the fragment is still very hot, volatile materials evaporate from the surface, but some volatiles, like water, remain in the interior portions. These volatiles become trapped inside the object when the crust forms but can escape in a process called outgassing. This happened when ‘Oumuamua was warmed by our Sun, producing the object’s non-gravitational acceleration, according to the new research. Essentially, ‘Oumuamua has a built-in propulsion system.

The new paper “does a remarkable job of explaining a variety of unusual properties of ‘Oumuamua with a single, coherent model,” said Matthew Knight, an astronomer at the US Naval Academy and an expert on ‘Oumuamua, in a press release from the University of California, Santa Cruz. “As future interstellar objects are discovered in coming years, it will be very interesting to see if any exhibit ‘Oumuamua-like properties. If so, it may indicate that the processes described in this study are widespread,” said Knight, who wasn’t involved with the new research.

A fascinating implication of this research is that it provides a potential mechanism for the hypothetical process of panspermia – when an exoplanet seeds other planets with life, including planets outside of its host system. Given the tremendous heat and forces involved in the process, however, any hitchhiking microbes would have to be extremely durable. Further research will have to investigate this possibility further, as the panspermia hypothesis remains a fringe theory.

In terms of moving forward, we need to detect more interstellar objects. As Knight said, the discovery of similarly shaped objects would go a long way in bolstering this exciting new theory.