'One of the Toughest Jobs' on Earth: Studying Melting Ice

Spring is looming in the northern hemisphere. It is habitually a key and busy time for environmental science fieldwork, no more so than for the select community that travel great lengths and endure perilous conditions to study some of the world’s highest glaciers in the mountains of Asia.

But the coronavirus-induced lockdown that is keeping more than a quarter of Earth’s population at home is having an impact on research as well. The Swiss Federal Institute for Forest, Snow and Landscape Research (WSL) have projects in the Andes as well as the Himalayas and have specific annual windows when they are able to get up there for a closer look.

“You do have a limited time to go there,” Francesca Pellicciotti, a WSL scientist who manages an international research team for the studying glaciers and their particular features including ice cliffs, told Gizmodo. “We would normally go [to the Nepali Himalayas] the whole month of May or mid-May to mid-June. You really need to target your time as before there is a lot of snow and it is too cold. Then it’s the same after, so you only have a window of a month then another in October-November time.”

With such precision required, the WSL Himalayan expedition this June has already been cancelled. A follow-up in October remains tentatively on the slate.

Pellicciotti’s years of experience at high altitudes means she and her team have plenty of data to work with in the meantime, but she said there is nothing like the feeling of a trip up to the roof of the world. A native of Rome, she believes it was her father who ignited a passion for mountains with childhood trips north to the Alps.

“In Switzerland you can take a train or a cable car up to the glaciers,” she said. “There [the Himalayas], it is really an adventure and then there is a respect of the locals, the valley, and of the mountains that you have to earn before you can even get to the place where you start taking your measurements.”

The area is home to the largest mass of ice in the world outside the poles. Straddling India, Nepal, Pakistan, and China, the mountains there are home to hydrology systems directly impacting more than 800 million people.

Pellicciotti’s team focuses on how climate change-induced shifts in glaciers could impact water systems in the future. Amongst the most significant of her discoveries in the last 10 years has been that glaciers covered by rocky debris are melting as fast as “clean” glaciers, the opposite of previous hypotheses.

Detailed analysis can now be done remotely thanks to huge advances in satellite technology, and agencies such as NASA have played an increasingly important role in monitoring ice from space. But for Pellicciotti’s team, the key is computer modelling. And for that to be effective, you have to get out there and measure the glaciers. “In about 2012, satellite studies were showing that one glacier was losing mass at the same rate as clean ice glaciers, which we could not explain because they are covered by debris,” she explained. “This is why you need to go to the field because you see things that the satellite cannot see, such as huge ice cliffs opening up like wounds for hundreds of metres.”

Carrying out detailed scientific work at altitudes well over 3,000 metres (9,842 feet) requires a unique skillset. It requires serious hiking and climbing – and thus, fitness – as well as a high degree of mathematical precision.

PhD student Marin Kneib, who has a desire to study and try and combat climate change coupled with a background in engineering and a passion for mountaineering, fits just that bill.

“I love all aspects of the work really, the data analysis part is really interesting, we use relatively complex tools and approaches to analyse our data and model our catchments, which is very stimulating from a scientific standpoint,” he told Gizmodo. “And of course, the fieldwork in remote locations of the Himalayas is always very exciting, especially when you’re a mountaineer like me.”

Kneib said that with the painstaking safety and acclimatisation measures in place, accidents are rare.

Pellicciotti is more cautious. She herself has broken a leg while working in the Andes (she told Gizmodo it was a result of neglecting her own safety guidelines and travelling alone). On another expedition in Nepal, a local girl nearly died after struggling with the altitude.

“I have to say when people see my pictures, they say ‘oh what a beautiful job,’ [but] this is one of the toughest jobs, you have accidents,” she said. “High elevation sickness is deadly, so yes, there is a lot of training. People are not used to the height, they think they will be fine, but you really have to take precautions when you ascend.”

The need to physically travel to and take measurements on glaciers is arguably more prescient given the scale of the plight facing them. Landslides, ice falls, and crevasses are among some of the dangers facing researchers and others brave enough to enter the rapidly warming alpine environment. And disappearing ice also takes an emotional toll, particularly on the people who live near them. 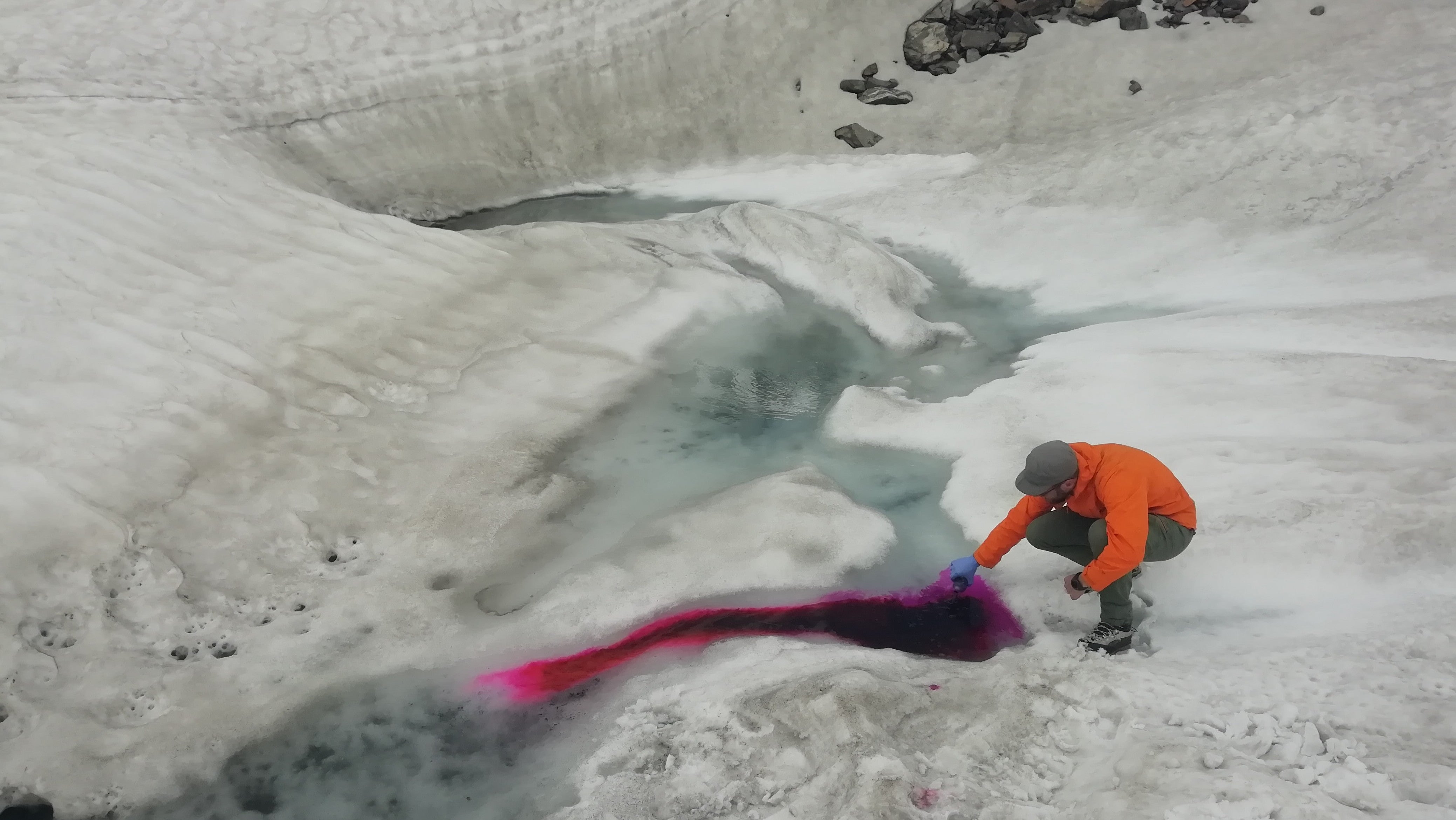 There is a lot of anthropomorphic language as climate change melts glaciers down to shadows of their former selves, and the people who live near them mourn their loss. Funerals have been held for disappeared glaciers in Switzerland and Iceland. Authorities in Switzerland have attempted to cover some glaciers in summer to stem their melt in the face of rising temperatures.

Even higher altitude glaciers in the colder reaches of the Himalayas and Andes are declining at rates visible to the naked eye. In June last year, a study showed that melting of Himalayan glaciers has doubled since the turn of the century. Another report published several months earlier had already suggested a third of the ice in the Hindu-Kush-Himalaya ranges could melt by the end of the century unless action was taken to cut emissions.

Pellicciotti said this is mirrored in the Andes where altered water flows mean conflicts happen between indigenous residents and mines further downstream.

“You do notice changes from one trip to the next,” said Pellicciotti. “But, of course, you are only seeing one small part of it anytime. Karakoram [mountain range on the edge of India, Pakistan, and China], for example, is 10 miles wide. You really have to look at the system as a whole.”

That system now includes the covid-19 pandemic which is a truly global phenomenon and has impacted practically every human environment all the way to the top of Mount Everest. The peak was closed for its upcoming spring climbing period by authorities last month. Both Nepal and India have subsequently entered full lockdowns, meaning travel there is on hold for now.

The cancellation of the planned WSL trip to the Satopanth Glacier and of other expeditions will doubtless leave a gap in the science, but an arguably greater impact will be economic given the increasingly lucrative tourism industry in Nepal. The researchers, however, will be able to continue their work in the face of the pandemic.

“We’re especially lucky because we already have very good data from the 2019 season,” Kneub said.

Catriona Fyffe, a glaciologist with Northumbria University, is also now working from home and hopeful that cancelled conferences can be resurrected by the miracle of Zoom. She has plenty of data to work on in the meantime, in particular on small high elevation glaciers in the picturesque Cordillera Blanca in Peru that could have large impacts.

“We are trying to model the size of these glaciers and how they are going to change,” she told Gizmodo. “That way, we can work out how much water there is going to be in these regions in the future and then try and give some suggestions to how people can adapt.”

But the cancelled fieldwork will leave a mark on the local economy. Any glaciology project often involves a team of up to 20 local porters carrying equipment. The lost income from coronavirus cancellations is indicative of the uneven impact that the virus has on communities in developing countries with fewer resources. But climate change has also exacted a similar toll as it melts the source of their livelihoods and those living downstream.

“I think I feel more sorry for people than for glaciers honestly,” Pellicciotti said. “I study glaciers because they are these great indicators of climate change and of all the damage we are doing to the planet. You see that damage you see already in the form of migration, poverty, desertification, and that makes me really sad.”